What's it like to sing one song for seven hours straight?

Artist Ragnar Kjartansson just made five singers simultaneously sing a song for seven hours - over and over and over. Did they go mad? Or should we all be giving such performances a go? 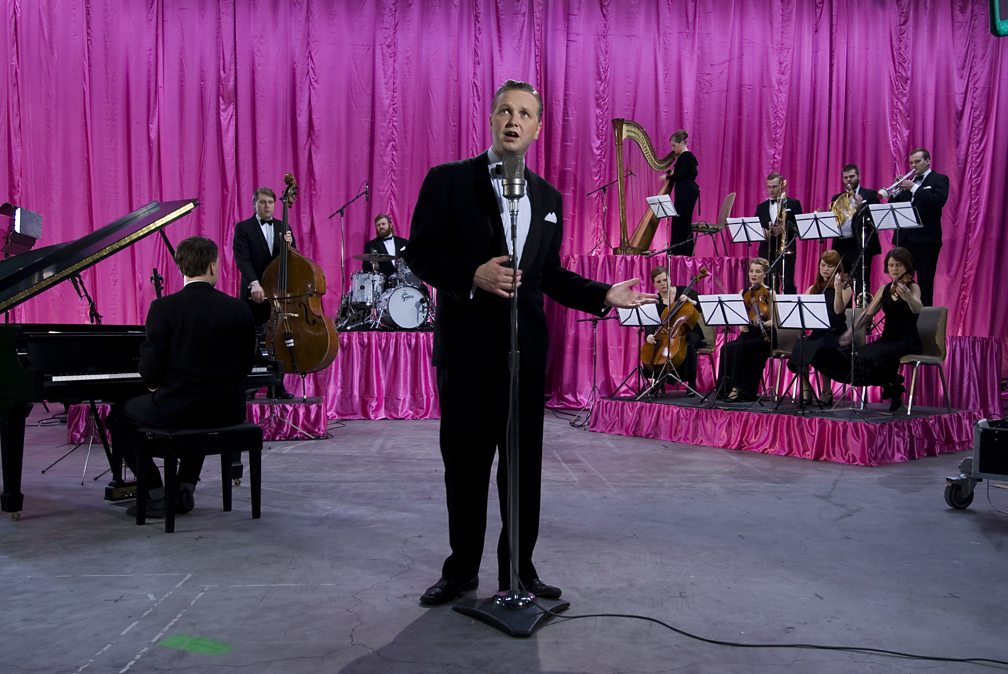 Everyone knows there's joy in repetition. Prince even wrote a song about it. But the Icelandic artist Ragnar Kjartansson, above, takes his love of repetition to extremes. He once got an opera company to perform two-minutes of Mozart for 12 hours, and he persuaded indie rock band The National to play their song Sorrow again and again – and again! - for six hours straight. "I had a bit of a meltdown after almost 100 times," singer Matt Berninger told the Guardian.

Ragnar says it's all about turning music into sculpture, but what on earth is it actually like to sing for that long? On 3 December, at the London Contemporary Music Festival, Ragnar asked five singers and pianists to play Schubert's An die Musik – a two-and-a-half-minute ode to the joy of music with text by Franz von Schober ("You, noble art… have transported me into a better world!") - for seven hours. That's 182 times. In a row. With only short breaks allowed to go to the loo.

Did they hit a level of musical understanding no one else has ever achieved before? We decided to go along to ask them. 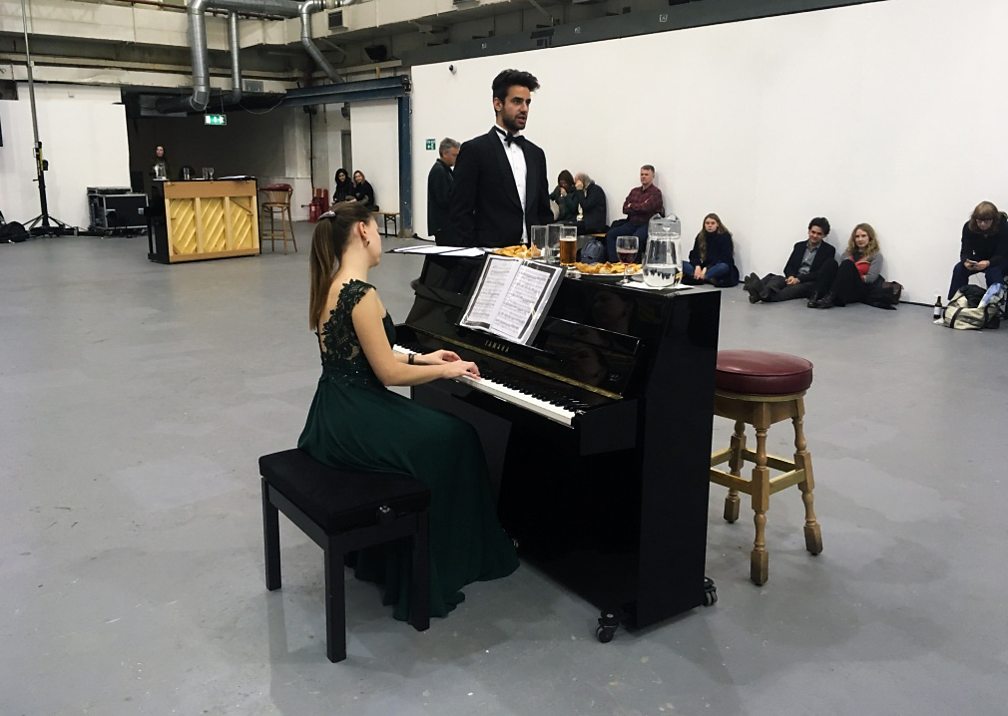 My larynx was getting really high. I was literally having to force it down. I was choking myself

"Mental. I really strongly recommend that nobody ever does it. It's crazy. In a recital, I'd usually sing, like, 20, 25 pieces. And I counted I sang that 182 times."

You were keeping score?

"One of the pianists said you should treat it like playing a really long cricket innings, batting for a draw, then you've got the overs to break it up. So I was counting in sixes. And 182. It's nuts!"

Why was it so crazy?

"I was just so in my head for so much of it, trying to get my technique straight and survive. There was a bit about two-and-a-half hours in, when I was on the floor and half the notes weren't coming out. My larynx [voice box] was getting really high. It was under my throat. I was literally having to force it down. I was choking myself to force it downwards.

"You're supposed to sing with a relaxed larynx that sits low in your throat the whole time. And mine kept coming up. There was nothing I could do about it because I couldn't take five minutes off."

Was there anything you actually enjoyed about the experience?

"Oh, no, I loved it! It's Schubert - the piece is brilliant, a seminal work. I didn't get bored. There's more than enough in it to keep my imagination ticking over 180 times. It's not going to leave my head for two weeks, which is going to get annoying, but…"

My larynx was getting really high. I was literally having to force it down. I was choking myself 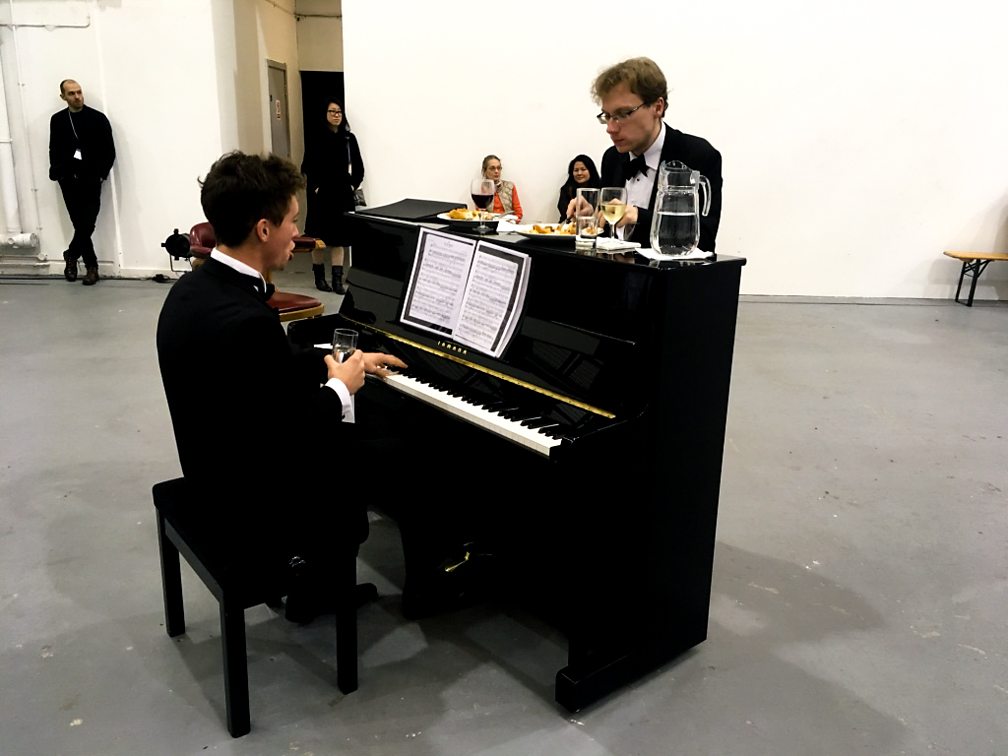 Someone started crying. Someone laughed. Others got teary eyed, but didn't properly cry

"I've had a cold and I didn't get my voice back until this morning so doing this probably wasn't the wisest thing. But do you know, it was amazing. It was actually amazing."

You looked like the first person to cave. You were definitely the first performer to start drinking the wine they were handing out.

"Was I? Ha! I didn't think I caved at all. What was interesting was the curve. I started out trying to perform it for myself, but then I was seeing all these people watching, staring, and I wanted to interact with them, and there were a couple of hours when I was at a piano by a bench and anyone who sat on it, I'd sing directly to them. The song's about the gift of music, and I was trying to give that gift, so I'd sing right into their eyes. One of the staff told me that she kept thinking the women must be my girlfriends, it was so intense."

How did people react?

"Someone started crying. Someone laughed. Others got teary eyed, but didn't properly cry. Some couldn't take it and looked away. Some people were just stone-cold staring back, no facial expression at all, which incidentally doesn't make for a great performance."

Did you find it physically tough?

"We were singing it in C, which is not a key it should be sung in by a tenor like me - I either had to sing too high or too low - so it was more knackering than normal, but I'm used to singing lots of hours. That's kind of the name of the game. A normal working day, I'll do six-to-nine. So, I'm alright. I bet you none of these guys are even tired. I mean they're all opera singers so have loads of endurance."

Someone started crying. Someone laughed. Others got teary eyed, but didn't properly cry 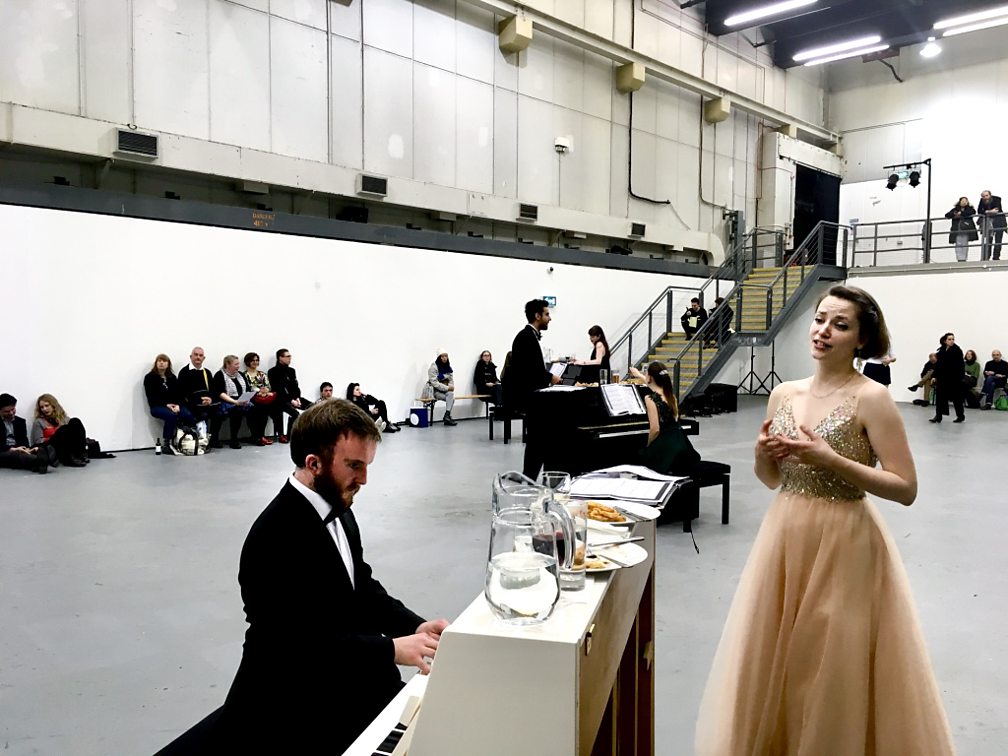 There were bits when I felt full of energy and bits where I definitely felt, like, 'Will. This. Ever. End?'

"I feel very tired. My support muscles really are hurting. I've spoken to some of the others who said their backs are sore. I think everyone's uncomfortable in different ways. But I actually had so much fun. It was way less difficult than I thought it was going to be. Of course, it was up and down. There were bits when I felt full of energy and bits where I definitely felt, like, 'Will. This. Ever. End?' Particularly at first, every time the song restarted, I was like, 'Argh, no!'

"The pianist and I actually decided to stop pausing at the end of each song because we realised when you finish you kind of go, 'Ahhhh' - there's this huge release of energy - and then you have to drag yourself back to start again."

You seemed to perk up after they brought the food out?

"Yes, I was singing and eating at the same time, which is probably not the ideal scenario."

Isn't fish and chips a bit of a heavy meal for the middle of a performance?

"No, it was totally amazing. I could have eaten an entire other portion. Singing's very athletic and physically intense. There have been studies in the US on how many calories opera singers burn, and it's a lot. I think of us as athletes a bit. It was very much like running a marathon. Except wearing a gown rather than running clothes."

There were bits when I felt full of energy and bits where I definitely felt, like, 'Will. This. Ever. End?' 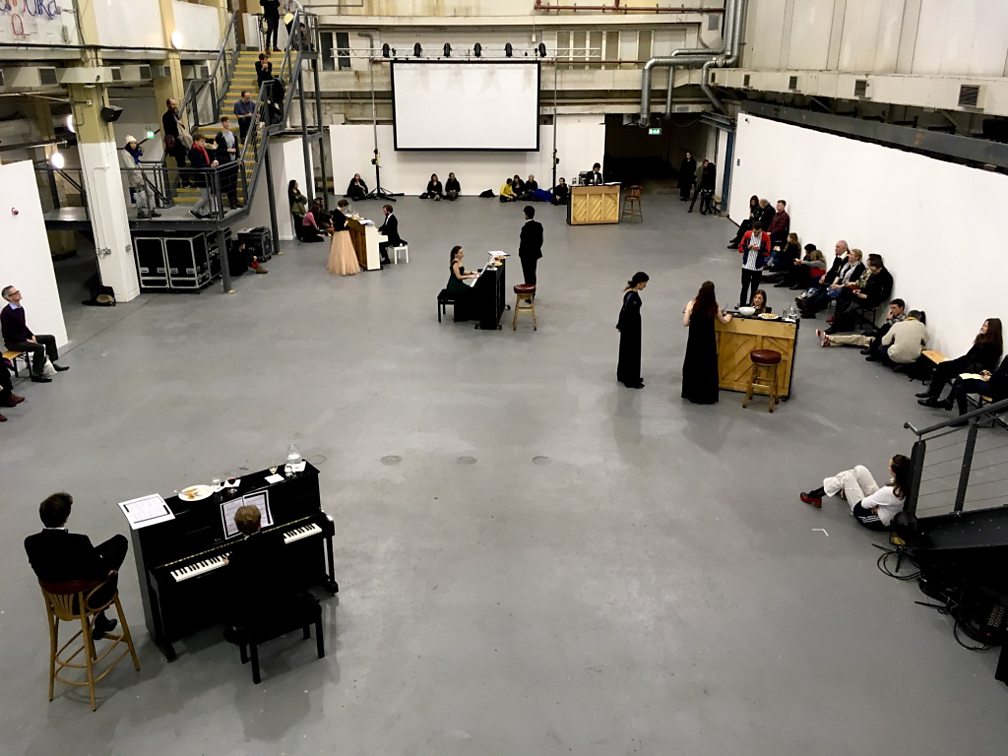 It was such an emotional experience doing one thing all day

What did you think about during the seven hours?

So you enjoyed it?

"Yes, it was such an emotional experience doing one thing all day. And the music is so beautiful. I think the best thing about it is it speaks to you in different ways each time you sing it. It surprised me throughout the day. Even now, I'm not sick of it."

So when bands like Radiohead say they're bored of their old songs and refuse to play them, are they just being silly?

"Yeah. If one day I sing a role in an opera and make my career out of it, and then I have to sing it over and over again, would I be bored? I think not, because there's actually so much to gain from a piece of music. Bands and artists who say, 'I'm bored with this, I don't want to perform it again,' they're missing something. There's always something new to find in a piece of music. And you get fresh energy and emotion from your audience."

It was such an emotional experience doing one thing all day 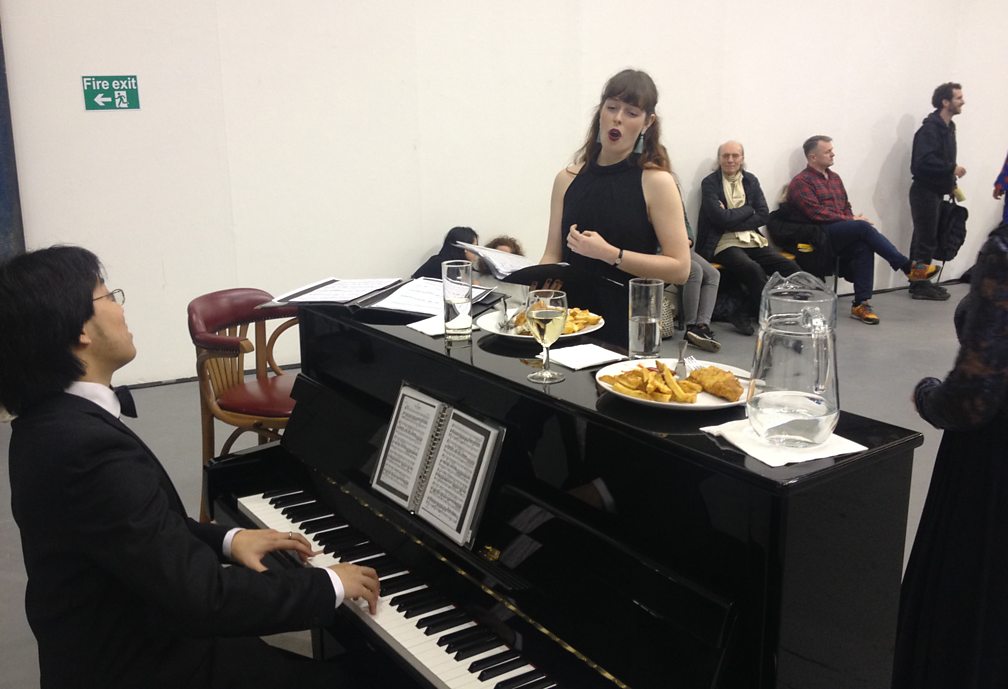 It was a stupid thing to do and now I have no voice!

How did you find it?

"Not as bad as I thought it would be. It went really quickly - apart from the last half-hour - but throughout the whole thing it was either joy or despair. That's what was happening. It was extreme all the way through."

Right from the get-go?

"Yeah, at the beginning I was pretty low energy. It’d been a bit of a while since breakfast and so my blood-sugar was going down, but then they brought me food and it improved."

What did you learn about that song from singing it over 180 times?

"That I never really want to sing it again! It's hard to tell you really because I'm exhausted, but it's meant to be this romantic, 'I love music' gesture and sometimes it became meaningless, just saying things over and over; it just lost it. But when I connected with the song it felt really good. It was random when that happened."

Would you advise anyone else to try this?

"Of course not! It was a stupid thing to do and now I have no voice! Eat first, that'd be my advice. And just kind of ride it out. That's the trick."

It was a stupid thing to do and now I have no voice!