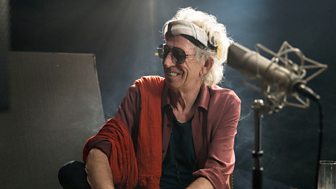 [WATCH] Keith Richards invites you to his Lost Weekend

BBC Four has invited Keith Richards to curate an entire weekend of programming, which begins this Friday, 23 September, at 7pm. Keith Richards' Lost Weekend is a hand-picked selection of television shows, cartoons, music clips and films (including The 39 Steps and I Walked with a Zombie), connected with segments from a specially filmed interview with Julien Temple (and a director's cut of his Keith documentary The Origin of the Species), in what is being billed as a rock 'n' roll mystery ride.

So, as a man with a clear sense of what he does and doesn't like (and a thrillingly sharp tongue at times), here's a brief taster of the musicians that have earned the great man's favour (and displeasure) over the years, starting with some of the modern artists, far outside the pantheon of blues masters Keith is most commonly heard to venerate, that he is happy to give the time of day:

[WATCH] Keith Richards invites you to his Lost Weekend

It would be a cheap shot to suggest Keith Richards only finds out about modern musicians when they support The Rolling Stones on tour, but that does seem a place where he can observe new talent up close. He has seen Ed Sheeran perform more than once, for example, and recognises a kindred spirit, as he acknowledges in the above interview with Huey Morgan: "There are many good young players out there that do search and look and know that there is something more than what is being pumped out at them at the moment. For instance a young cat Ed Sheenan [sic] I found very interesting, he worked with us at Atlanta and Dallas... a one-man little band! Great voice."

[WATCH] Amy Winehouse on being a jazz singer

This open-armed embrace of any young pup willing to dig back into the same pot of blues, gospel and jazz that inspires him also applied to Amy Winehouse, whose talent, devotion to mid-20th century rhythm and blues and struggle with her personal and public demons rang a bell. Asked in 2008 which modern musicians had caught his attention, Keith told the Mail on Sunday: "There's only one person. That girl Amy."

He recently told The Quietus that Amy's death had been quite a blow: "Amy Winehouse was a big disappointment because I was waiting for that girl to really bloom because she was really just starting and I thought she was fantastic. It was such a shame. But there’s a high rate of that sort of thing in this business." 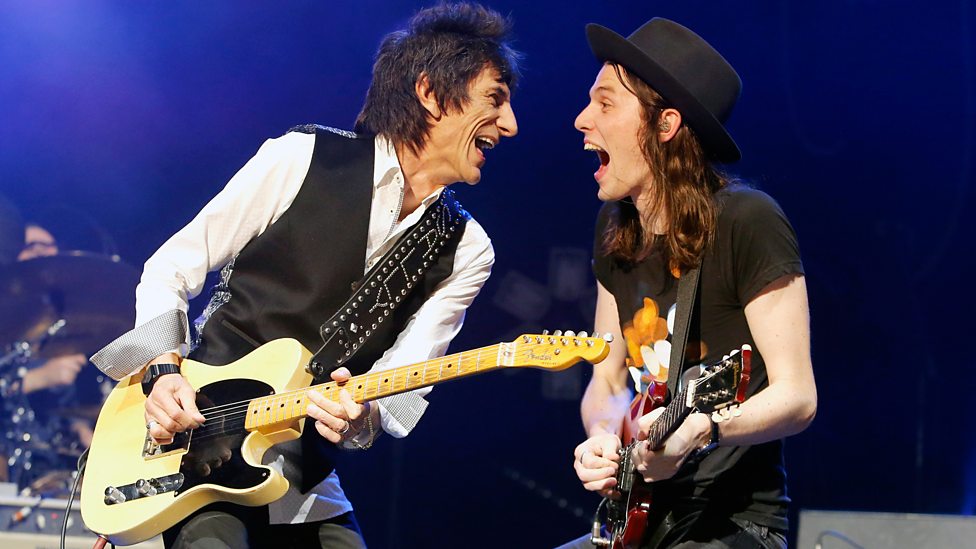 Another name keeps cropping up in recent Keith interviews is that of James Bay, who had the honour of supporting the Stones very early in his career, long before the Critic's Choice Brit trophy came his way. And got to play with Ronnie Wood at one of his own gigs. When asked in that same Quietus interview to name any modern artists he feels are carrying the torch forward for the kind of music making he approves of, Keith's answer is once again Ed Sheeran, "...and James Bay. They're the two that come to mind immediately."

She gave Mick a run for his money

It must be a lovely surprise to be rocking out on one of your songs, and then suddenly realise Florence Welch is there onstage giving it the full banshee wail. It certainly was for Keith, who hadn't been previously aware who this titian titan was when she appeared onstage to belt out Gimme Shelter, as he told the Express: "I'd never met her before or seen her work but I just went, 'Wow, there's a strong voice'. She's a hell of a performer. She gave Mick a run for his money. She can move. Great fun, lovely girl."

For her part, Florence acknowledges the impact of Merry Clayton's astonishing vocal in Gimme Shelter in this interview with Zoe Ball for Radio 2's Tracks of My Years: "When her voice cracks, it's the most amazing sound, it literally sounds like the song's being ripped from her... That's how I want my songs to sound."

She gave Mick a run for his money

It's well known that Keith loves his reggae, but it may have been surprising for anyone listening to his Desert Island Discs choices - including Chuck Berry, Hank Williams and Little Walter - to hear him pick Gregory Isaacs' Extra Classic as the one song he would save if his island home were about to be engulfed by waves. But as he reveals, it has special sentimental value: "I've always thought that Gregory was one of the best songwriters that came out of [Jamaica], and a sweet singer... And also Extra Classic was a song where I met my old lady, so I thought I would carry that through."

And now, for the dark side: five of Keith's rocking contemporaries that don't quite cut the mustard:

I always felt there was something a little hollow about it, you know?

Never one to be unduly impressed by virtuosity at the expense of feel, Keith's feelings about Led Zeppelin - the other greatest rock 'n' roll band in the world (70s division) - are well known. He was unimpressed by their first album, saying at the time, "The guy's voice started to get on my nerves. I don't know why; maybe he's a little too acrobatic."

More recently, he turned his withering attention to their hugely influential drummer (just ask Black Sabbath's Bill Ward, above) John Bonham, telling Rolling Stone: "I love Jimmy Page, but as a band, no, with John Bonham thundering down the highway in an uncontrolled 18-wheeler. He had cornered the market there. Jimmy is a brilliant player. But I always felt there was something a little hollow about it, you know?"

I always felt there was something a little hollow about it, you know?

The Grateful Dead is where everybody got it wrong

Not that he shows any more love for bands who just stick to the rhythm as a base from which to jam endlessly. The Grateful Dead, for example, are a band who share a similar musical background with The Rolling Stones, but were inspired more by the improvisatory possibilities of jazz than the brutal realities of blues.

Consequently, no two Grateful Dead concerts were ever the same, but this questing attitude could become tiresome, as Keith told Billboard: "The Grateful Dead is where everybody got it wrong. Just poodling about for hours and hours. Jerry Garcia, boring s***, man. Sorry, Jerry."

The Grateful Dead is where everybody got it wrong

[WATCH] Highlights of Metallica at Glastonbury 2014

Never the biggest fan of heavy metal, Keith's view on the bands who still hold him in awestruck respect is rather dim, especially Black Sabbath, who (in his view at least) clearly should've been paying more attention to Charlie Watts than John Bonham. More recently Metallica, who have also opened for the Stones in their time, came under fire in this Daily News interview: "Millions are in love with Metallica and Black Sabbath. I just thought they were great jokes…"

Which is almost affectionate. Or at least it would be had he not concluded by saying, "I don't know where Metallica's inspiration comes from, but if it's from me, then I f***** up." 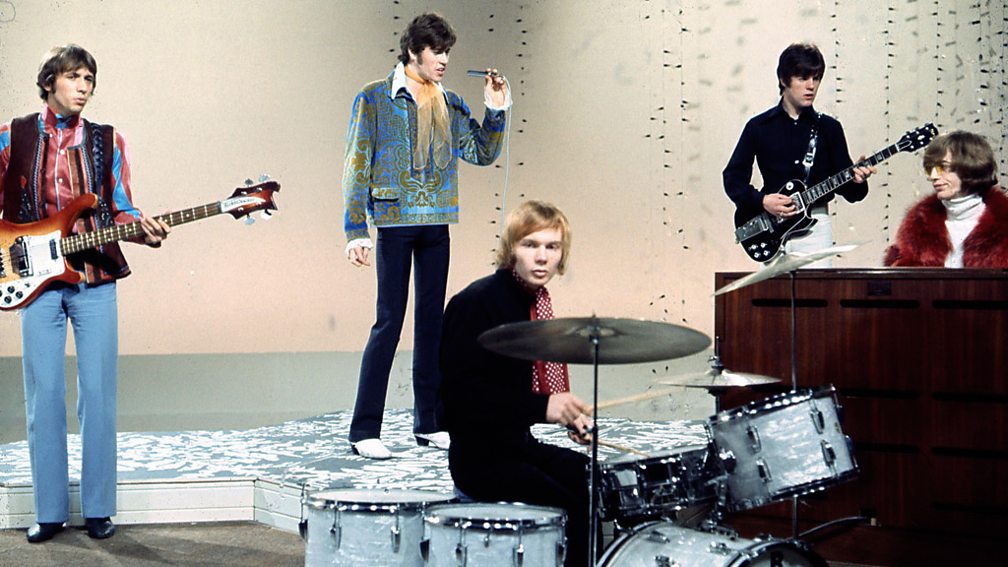 As Liam and Noel Gallagher will be the first to admit, there's a lot of press attention to be milked when one rock band has sharp words for the biggest pop stars of the moment, and it's a lessen they learned from Keith. In his 1960s pomp, he addressed his attention to The Bee Gees, who were at that point scoring huge chart hits with melancholy, wistful songs about mining disasters and Massachusetts. "Well, they're in their own little fantasy world," he fumed, "You only have to read what they talk about in interviews... how many suits they've got and that kind of crap. It's all kid stuff, isn't it?"

There must surely have been a twinkle in Keith's eyes when he made the following, scorching damnation of rap music in The Daily News, especially from a chap whose primary musical love - the blues - comes from the same minimalist, primal impulse to stand up to life's bitterest blows that also fuels hip hop culture: "What rap did that was impressive was to show there are so many tone-deaf people out there. All they need is a drum beat and somebody yelling over it and they're happy. There's an enormous market for people who can't tell one note from another."

There again, his most cutting appraisal sounds deadly serious - "rap - so many words, so little said" - so maybe hip hop is just a step too far.