This page has been archived and is no longer updated.Find out more about page archiving.
Schedule
BBC Asian Network
Asian Network Live 2018

ALL the biggest moments from Asian Network Live 2018 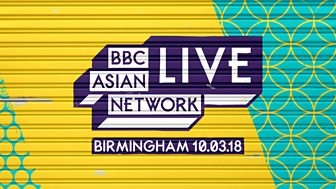 What an incredible night! Birmingham, you did us so proud. All the artists - unbelievable scenes. THANK YOU. Everyone watching online across the world - we salute you!

Want to see how it all went down? Here's the story of the night. Want to relive all the best moments? Keep reading. And we'll see you all again next year for Asian Network Live 2019. We're counting down the days already.

Our very own Harpz stunned us with her opening dance number

It's not everyday you see your favourite breakfast show DJ take to the stage as part of a fully fledged dance troupe - but that's exactly what Harpz treated us to in Birmingham, and it was INCREDIBLE! We need to get practicing.

Imran Khan played the first-ever Asian Network Live in 2016 and we were delighted to have the Dutchman back. He knows how to get a party started and - no two ways about it - President Roley is a banger.

It was hard to keep this to ourselves! We know how much you love Arjun - you've watched his YouTubes more than 250 million times. He was a very, very special guest in Birmingham and here he is performing the ultra-soulful Vaadi. Swoon.

Jenny told us before the show that she was "super-excited. I just want to perform!" And perform she did, playing Narma - an absolute classic - with her superb dancers. Pure, unadulterated Punjabi party vibes.

Double trouble! US YouTube sensation Adam Saleh with Faydee, one of the biggest artists on the Arabic pop scene. They played Waynak - big tune! "Where did you go? I need to find you like treasure!"

Derby's JK has been a big figure in Bhangra ever since his debut single, Gabru Punjab Da, dropped in 2008. Pomp Pomp Tha is from 2017 and it's already clocked up 1.3m YouTube views. Expect that number to rise massively after this performance.

Local lads Lucas and Ash have been mates since childhood and there was no way they won't going to play their anthem for their home city. "Where we from!?" Everyone knew the answer to that, and this blew the roof off the Arena Birmingham.

That moment when NAV wanted you...

Straight outta Toronto, rapper and producer NAV is signed to The Weeknd's XO label and has collaborated with Drake, A$AP Ferg and Travis Scott, as well as The Weeknd. The man is officially going places, led by Wanted You, his biggest tune yet.

This is the second year running that California's Jasmine Sandlas has performed at Asian Network Live and, Jasmine, you'll always be welcome. Illegal Weapon is a huge tune (71m YouTube views and counting!), and how good did it sound tonight!?

JayKae brings a bit of Moscow to Birmingham

Also repping Birmingham at Asian Network Live 2018 was JayKae, who performed his breakout song Moscow. Hard-hitting track, with some choice disses: "Rolling around with the holes in your socks, bro." 😂

Twitter was blowing up ahead of Guru's first UK appearance and didn't he look sharp performing Suit in a... suit! Still only 26, he's one of the brightest stars in Indian music, and he's already made his Bollywood debut - in last year's Hindi Medium.

What an honour it was to have Jay headline and you all know this one - Dance With You, Jay's debut single with the Rishi Rich Project from all the way back in 2003. Hearing it at the Arena Birmingham topped a brilliant night - a landmark evening for Asian music in the UK, as Bobby Friction correctly said.