Pop Trumps: Who is the current king or queen of pop?

The regal titles pop stars are given aren't often decided with the beneficial effects of science. But what if, in the absence of a reigning king of pop since Michael Jackson passed away, we used statistics to try and work out who most deserves to be crowned? What if we picked some categories, did a bit of research, made some playing cards in homage to the classic game and then proclaimed an outright winner at the end? Would Madonna still be queen in 2016?

Well, that is exactly what has happened. Every notable pop star around today has been subjected to trial by five categories (figures were taken up to 12 October):

Streams - a combination of all YouTube and Spotify plays (source: Kworb)
Followers - combining Twitter and Instagram followers, to assess the size of social media fanbase
Weeks at No.1 - a true test of pop regality, and a combined figure from both US and UK singles charts
Album sales - global sales since 2010 (source: United World Chart)
Personal fortune - including princely revenues from ticket sales and branding opportunities (source: TheRichest)

We then disregarded all but the top five women and men (Ed Sheeran, Lady Gaga and Kanye all dropped out at this point), and ranked our Top 10 by giving them marks according to their position in each category - 10 for first place, 9 for second and so on. The monarch is the one with the greatest cumulative score by the end. 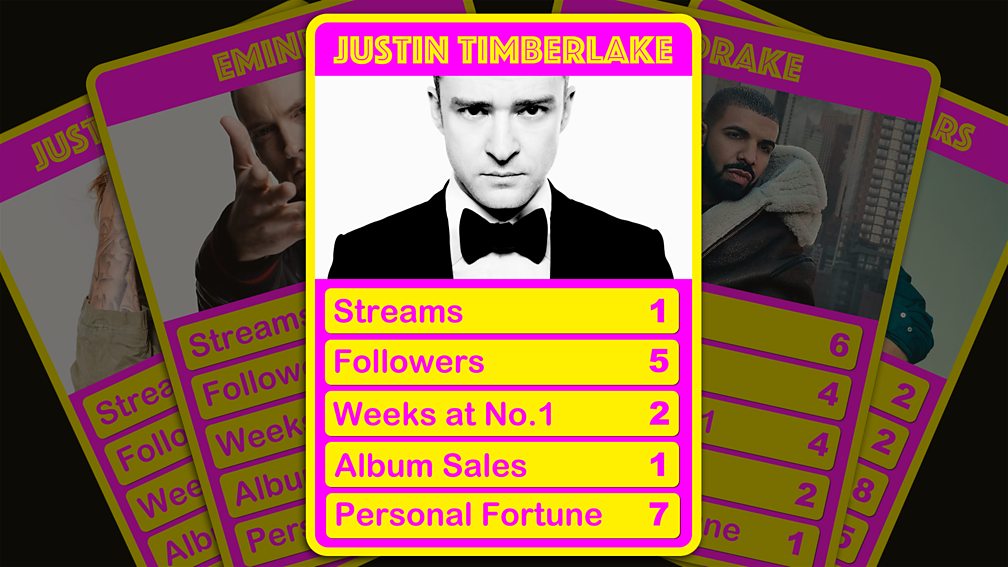 Justin's chances of winning were affected by a similar problem to that facing Madonna, namely that anyone with a decently long career won't score tremendously high in the streaming category, as the frenzy of their pop peaks happened before that sort of thing took off. In fact Justin was way down in 59th place, with a mighty (but relatively paltry) 619,869,453 plays. His 23 weeks at No.1 helped lift him up the ranks, however, as did an estimated personal fortune of $225 million, so don't feel too sorry for him. 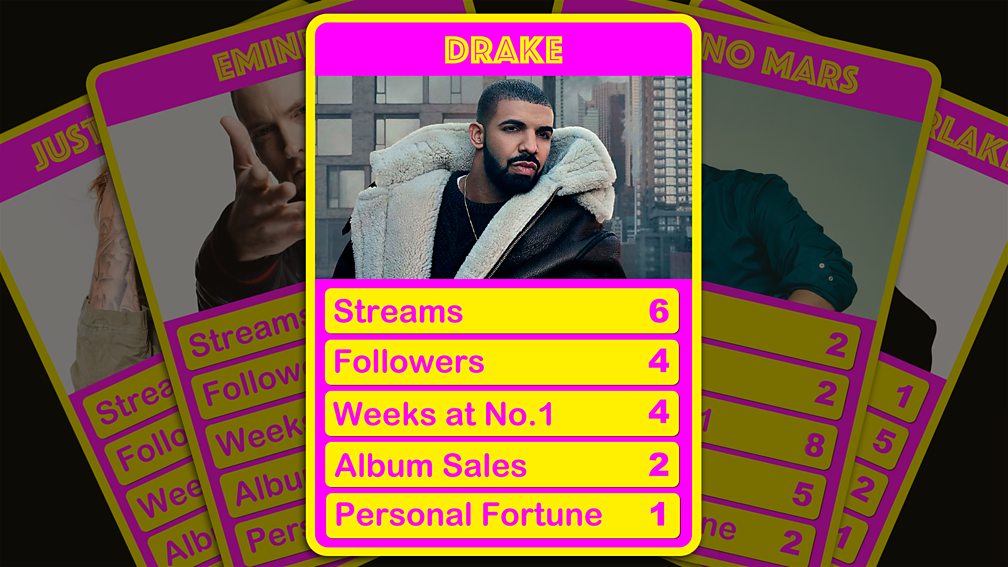 It's clear our system favours a good all-rounder, and Drake, while scoring low on fortune and album sales (so far), has a couple of fair-to-middling results in social media (he came 15th overall) and his 26 weeks at No.1 have helped, too. But his streams are where he is most effective, coming in at sixth place overall, just behind fellow all-rounder David Guetta, who narrowly missed out on a place in our Top 10. 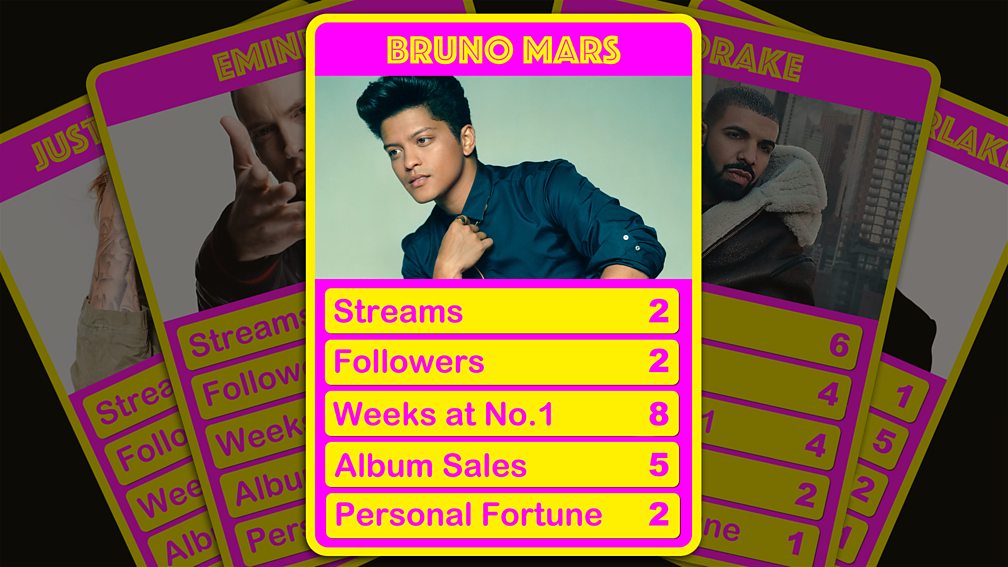 While Bruno's peak moments have all been during the era of Spotify, it's actually his album sales (an estimated 10 million and counting) and his 44 weeks spent sitting at the top of either the British or American charts that have put him in the running. Still a way to go on that personal fortune though (a meagre $105 million), but there's plenty of time to secure a few endorsements and rake in the cash. 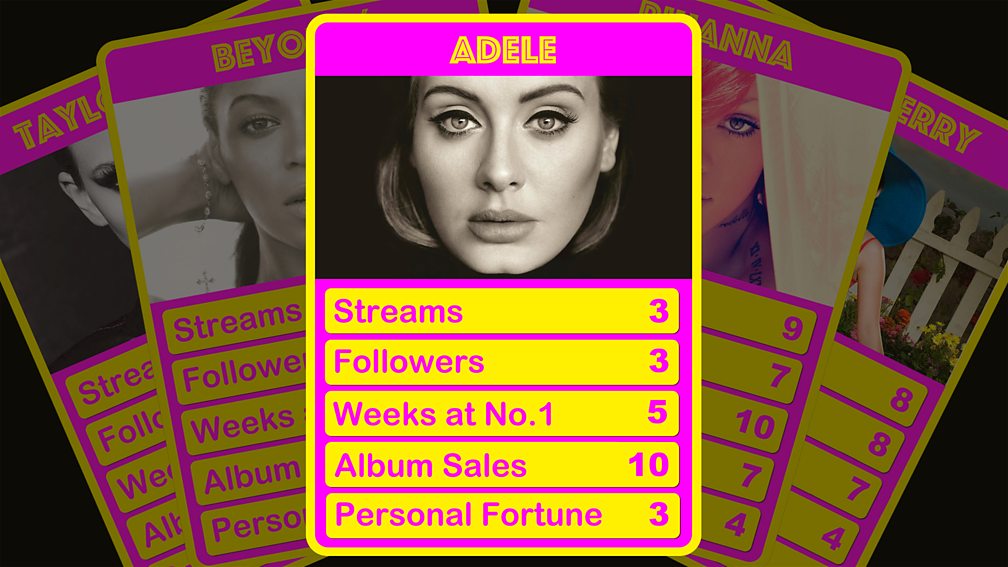 It'll come as no surprise to find out that Adele's album sales dwarf those of everyone else on this list. But her near-40 million sales are entirely dwarfed (by a factor of 10) by Madonna's, so there's still plenty of work to be done. Elsewhere, her 32 weeks at the top spot (eight in the UK, 24 in the US) helped her barge Lady Gaga aside to become the fifth-highest ranked female star (and seventh overall), and fly the flag as the sole British entry for either king or queen position. 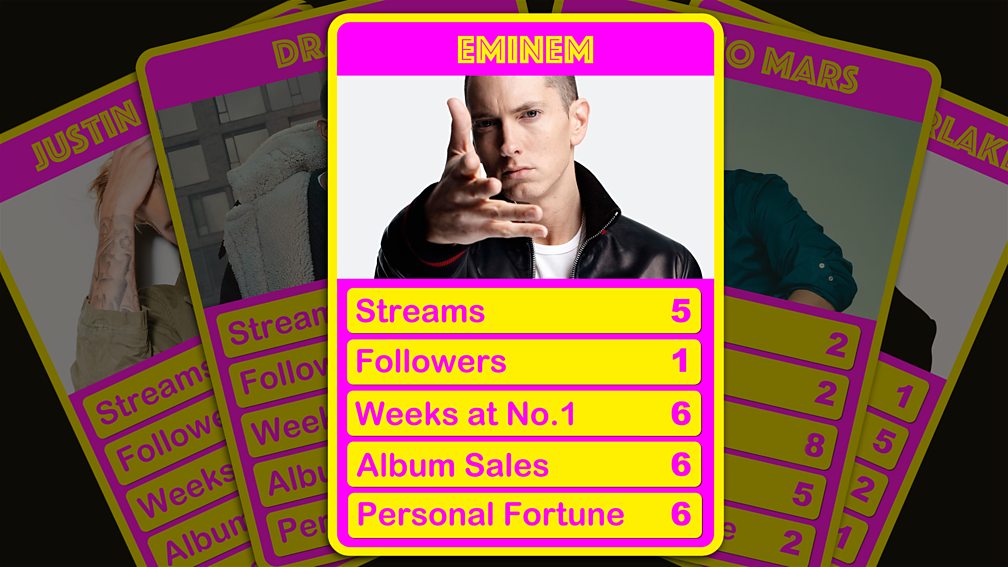 Two things spring to mind right away. The first is that it's curiously neat that the last three results on Eminem's card spell 666, given his devilish determination to stir up trouble. The second is that he probably won't mind not being crowned the new king of pop, given that he's already proclaimed himself a Rap God. Still, he won't complain at having come seventh overall in the streaming category, just behind Drake and David Guetta, having had his songs played a whopping 8,184,394,743 times. 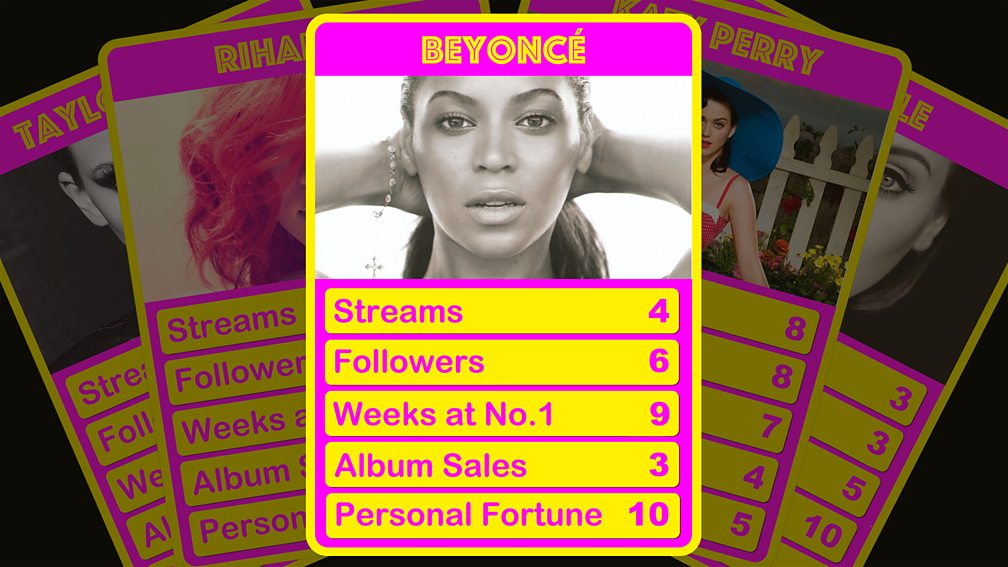 Once we get up into the Top 5 there's really very little that separates the would-be monarchs. Beyoncé's 47 weeks at the top of the charts and exceptionally rabid fanbase on social media - well over 100 million follows on Twitter and Instagram - place her only fractionally behind everyone else at the top end of the list. But It's her business sense that really shines through, with a fortune estimated at $265 million. Of course, that's chickenfeed to some stars, with Lady Gaga, Jennifer Lopez and Madonna all leaving her in their (gold) dust. 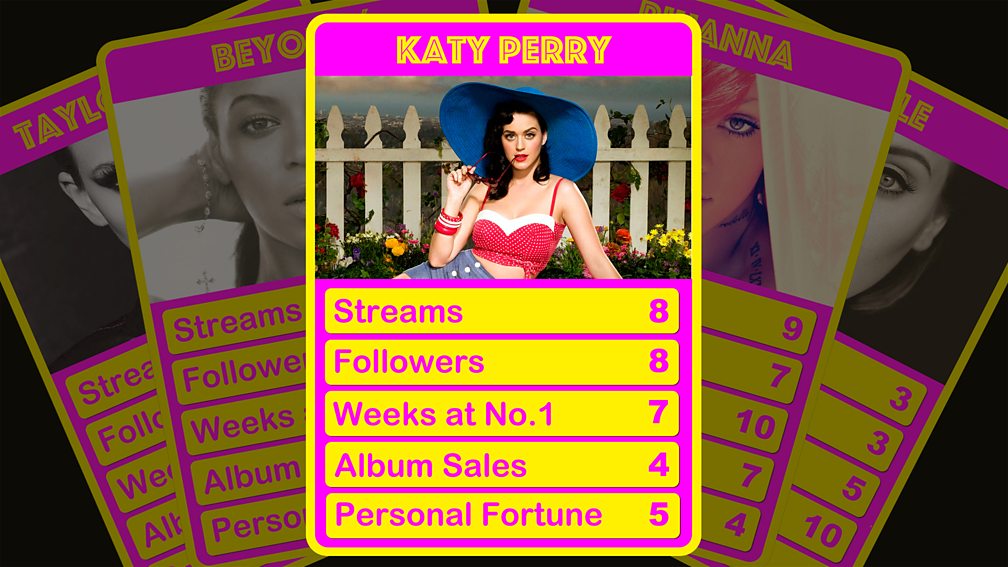 Another all-rounder, Katy didn't score a perfect 10 in any category, but did well across the board, particularly in streams (third overall) and social media, where she came fourth, just behind Selena Gomez. And she achieved all that with only 43 weeks at No.1 and a piffling personal fortune of around $210 million. Imagine how well she'll do when the really big hits come in. 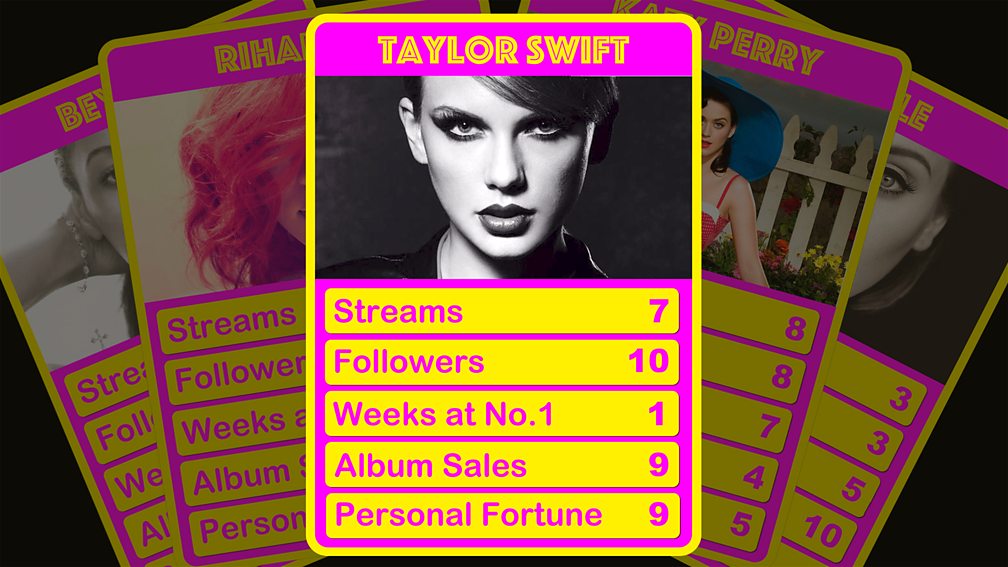 This is where it starts to get really tight. Our tally system showed only one point difference between each of the artists in the Top 3. Taylor Swift aced the social media, personal fortune and album sales side of things, but was left way behind with her chart-toppers, having only spent 15 weeks at No.1 in a career that has not been short of hits. She was in 17th place in that category, just below Wiz Khalifa (17 weeks) and tying with P!nk. That's the one thing that has kept her from stealing almost all the crowns on offer. 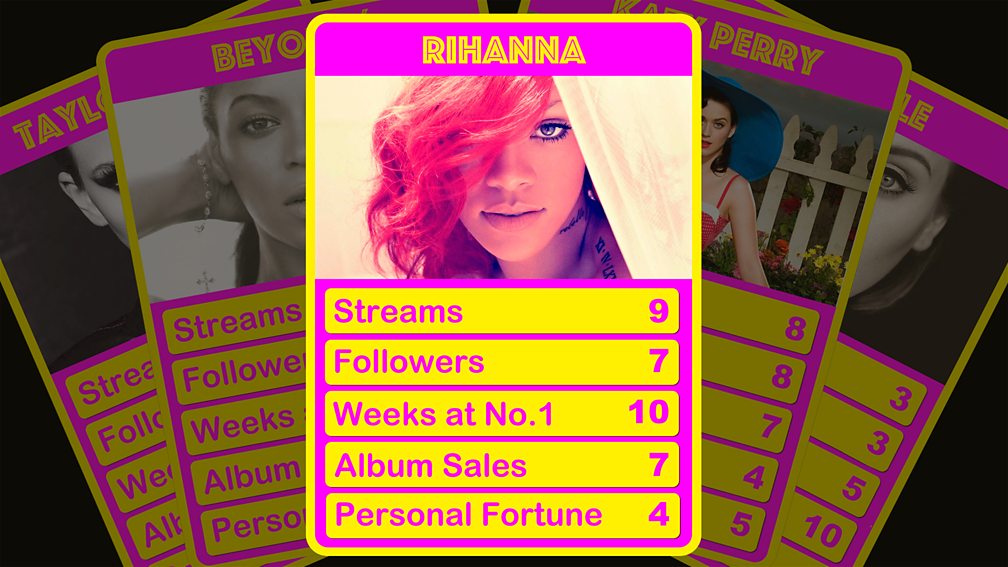 Rihanna's hugely impressive 84 weeks at No.1 is beyond even the reach of Madonna, who only managed 54 weeks (or a year and a fortnight, in other words). And only one person has beaten her preposterously huge 13 billion (and counting) stream tally. This, plus a very healthy social media presence (she came sixth, just behind Ariana Grande) and her status as the most-downloaded artist of all time must surely qualify her for Queen of Pop status. She's every bit as good at provoking a row about her videos as Madonna is, too. Clearly the crown is in safe hands. 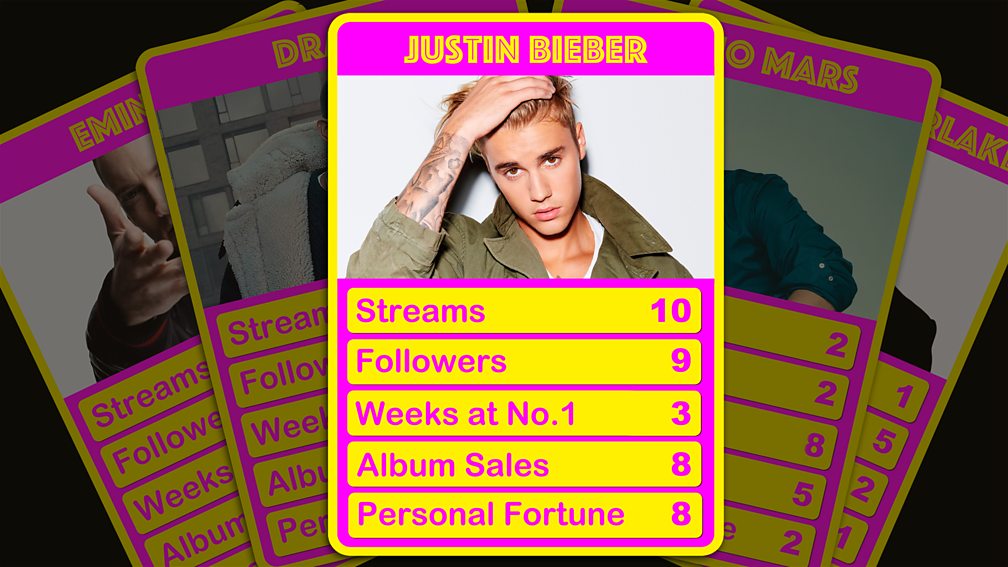 So here he is, the new King of Pop and the Grand Monarch of Music as well. Justin Bieber is, according to our figures, the most-streamed artist, with the second-largest social media fanbase after Taylor Swift (160 million follows across the two networks). He's spent 18 weeks at No.1, a good portion of those within the last year, has sold in excess of 15 million albums worldwide and is estimated to be worth around $250 million. It's also worth noting that he's also the only male pop star to properly challenge the close rivals at the very top of this race, all of whom are female.

Now, should we make a statue or, as is traditional, wait for him to provide his own?