Stand out this Halloween with these wild costumes inspired by pop

All-Hallow's Eve doth approach, and if you haven't got your costume sorted by now, you better get thinking. But don't worry, music fans, we have your back with some inspiration from the most creatively costumed artists out there...

In among her many perfections, Beyoncé LOVES Halloween, and excels at the family costume. Her highlights: recreating Lil Kim's most famous outfits, dressing as a giant (queen) bee, putting Jay-Z and herself in boxes as Barbie and Ken, dressing up as Salt‐N‐Pepa with daughter Blue Ivy and mother Tina Knowles, and as Frida Kahlo.

Back in his Genesis days, Peter Gabriel was known for his onstage costumes: the flower mask, The Reverend, his bat-wing-hat. All are Halloween-suitable, but most terrifying is this character from The Colony of Slippermen on The Lamb Lies Down on Broadway: "His skin's all covered in slimy lumps / With lips that slide across each chin." Aieeee!

Britney and Banana the python

When Britney performed her Neptunes-produced hit I’m a Slave 4 U at the 2001 MTV VMA Awards, she danced with a seven-foot Burmese python called Banana. She was criticised by PETA, but Banana, now nearly 12 feet long and not, it turned out, actually named Banana, was, as of August 2016, still alive and well. MTV had the story.

Katy Perry as a high-class alien

As befits someone whose birthday is October 25, Katy Perry is a queen of dress-up, and beyond her bizarre stage getups, her own Halloween costumes have included a Cheeto, Freddie Mercury and Hillary Clinton. In the video for ET, meanwhile, she's a high-class alien in a look surely recreatable with some purple eyeshadow and extra-super-hold hairspray.

Double points for musicians dressed as other musicians, especially if it's pop hero Ellie Goulding paying tribute to the queen of country Dolly Parton with this note-perfect ensemble.

Not one for all the coulrophobes out there: David Bowie's classic scary-Pierrot look in Ashes to Ashes is still a bone-chiller. You better not mess.

Kate Bush as a bat 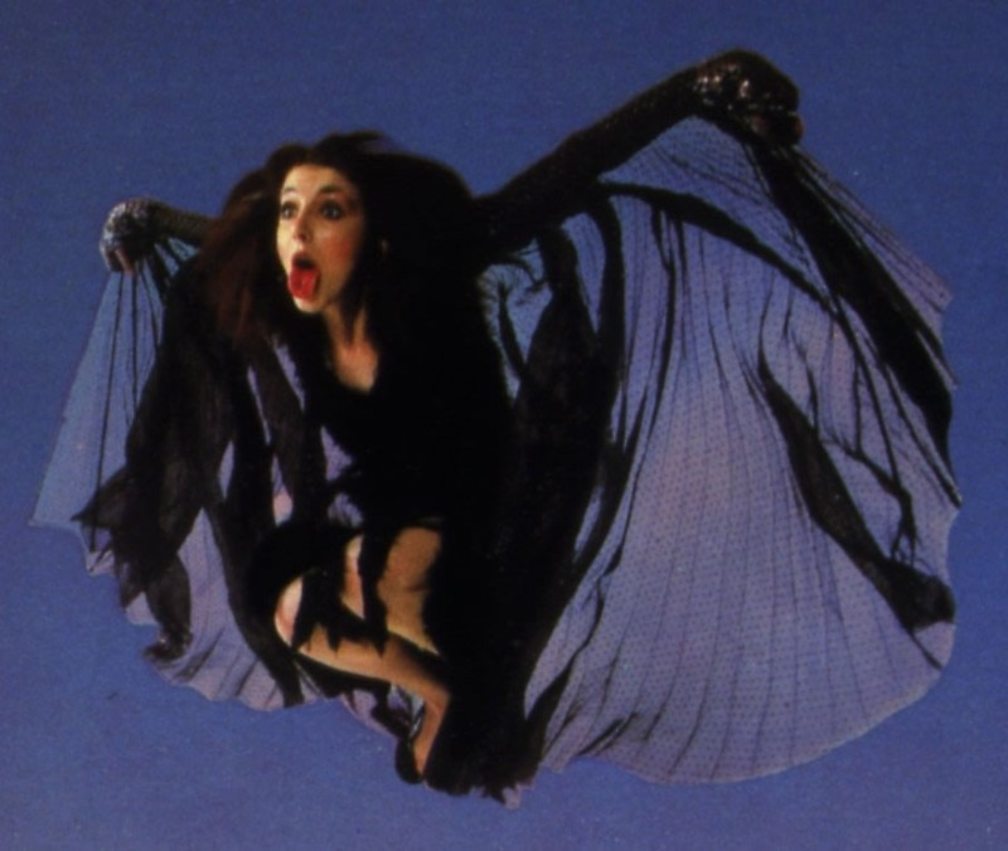 The gorgeous sleeve of Kate Bush's third album Never for Ever (illustrated by Nick Price) depicts her musical ideas, from light (swan) to dark (bat) billowing out from her, er, subconscious. On the rear sleeve, though, she revels in the dark side, actually becoming a very am-dram bat.

Róisín Murphy's kook-kook-couture stagewear is a rich font of inspiration from angular, acid-bright dresses, to that time she came onstage in Williamsburg, New York, wearing a triple head (see at Brooklyn Vegan). Here she is donning a range of guises from hair metal wig to biscuit-faced woman in the moon at the 6 Music Festival in 2016.

There's something of a transatlantic divide on Halloween costumes: in the UK we tend to stick to scary costumes, whereas in the US themes range wide and random. Kanye here has taken inspiration from a line in his and Lil Pump's song I Love It ("When the first time they ask you if you want sparklin' or still?"), performing the song on SNL dressed appropriately. 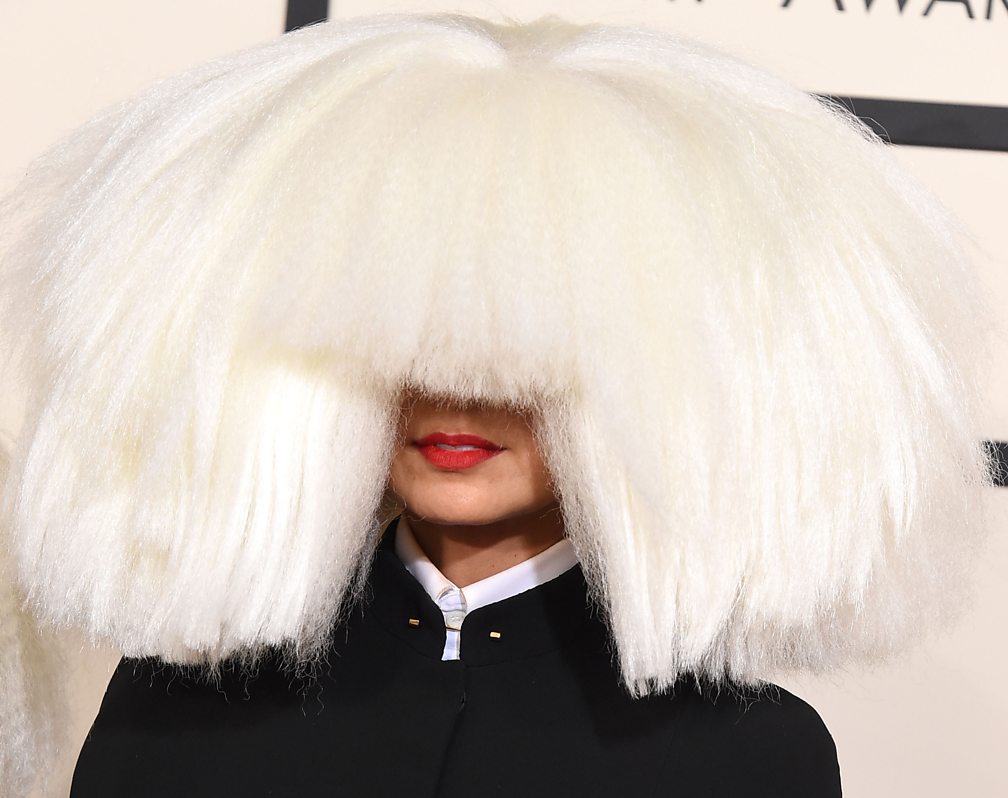 For the self-conscious or incognito among us, Sia's radical approach to hairpieces offers new avenues of Cousin It-style Halloween self-expression. How big do you dare to wig? (See also: Pharrell's big hat.) 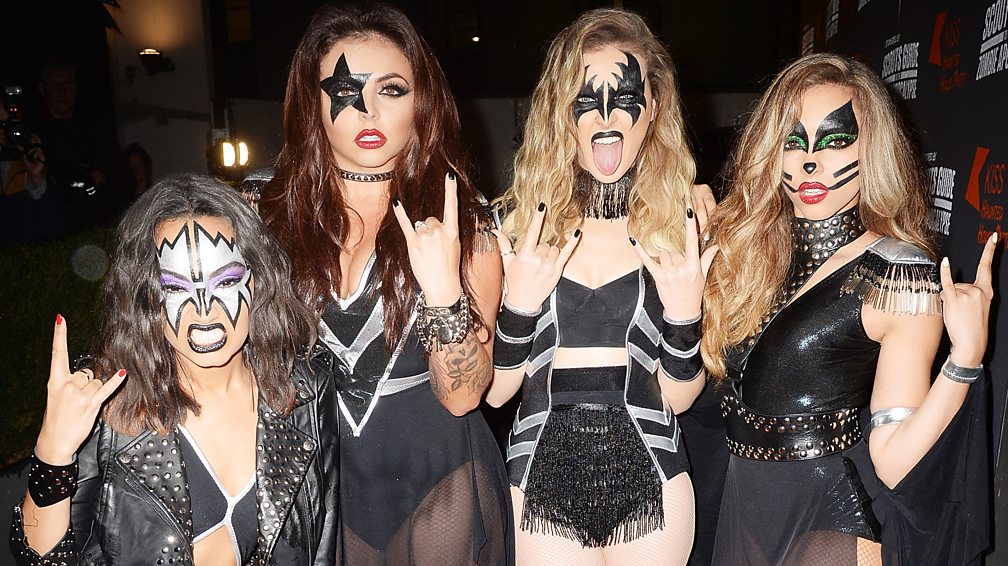 More musicians as musicians, this time with a group costume for friends - the Little Mix girls go glam as hard rockers KISS.

Modern queen of costume Lady Gaga made a mean Edward Scissorhands for her Halloween costume in 2017, but has spooky looks for 365 days of the year. Dare you craft a meat dress? Or a bubble dress? Have you got the skills to recreate the Gagabike from the cover of Born This Way? 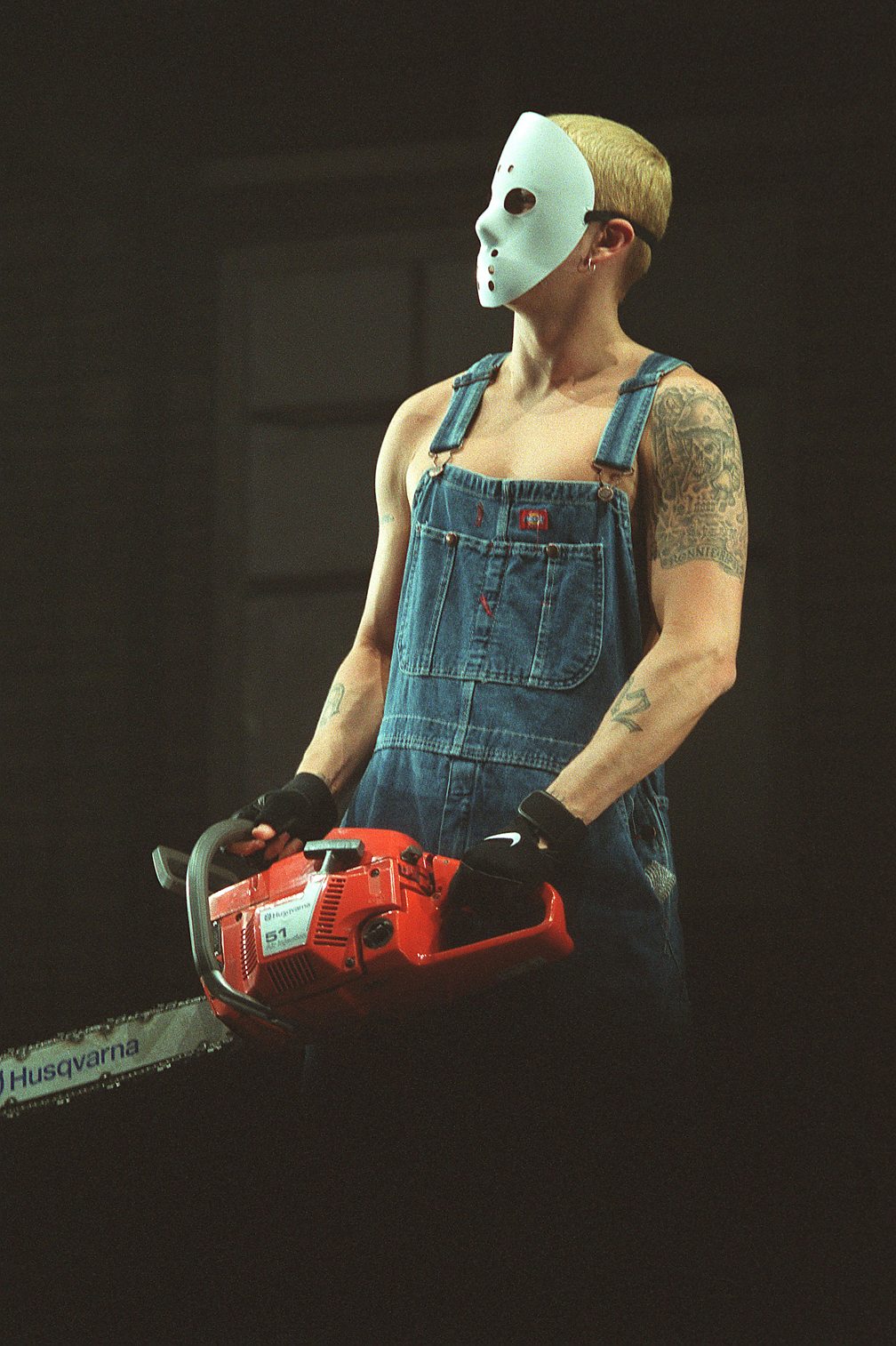 Marshall Mathers lives to shock, and back in the days when he was still America's foremost moral panic, he liked to reference the Friday the 13th film franchise and The Texas Chainsaw Massacre with a simple hockey mask, denim dungarees and power-tool getup. Please note: do not use a real chainsaw.

Adele as The Mask - with Jim Carrey response!

Adele is another artist who goes all out for fancy dress. Previous incarnations include George Michael, another Dolly Parton, and Winnie Sanderson, Bette Midler's witchy character in Hocus Pocus. In a meta move, she even became 'Adele impersonator' Jenny for Adele at the BBC. Her best costume though, has to be as Stanley Ipkiss from The Mask - so good it even inspired a reply costume from Jim Carrey, who dressed up as an Adele roadie.

Don't be that person who turns up to the Halloween party saying, "I came as myself." Please don't. At the very least, you can borrow a generously proportioned relative's suit and be Talking Head David Byrne in the Big Suit from Stop Making Sense.