We should all give thanks to musicians. Not just, as Abba would have it, for the music, but for their drive to entertain, and they truly entertained us this year, particularly with these strange, hilarious tales...

A presiding spirit of 1980s synthpop with Eurythmics, Annie Lennox and her gilded pipes still grace the airwaves every day, and she’s sold over 80 million records worldwide. But it seems there are still some small pockets of the US where Lennox’s name hasn’t reached, such as the new music desk of one Los Angeles radio station.

Lennox shared an email on Facebook in which the unnamed station’s “new music coordinator”, Kylie, told Lennox, “I came across your music on line [sic] and really like what I heard…. Let them know Kylie referred you, and you’ll be in.” Lucky for Kylie, Lennox is a good sport: “think I’m in with a chance??!!!” she cracked.

2. The Juggalos march on Washington 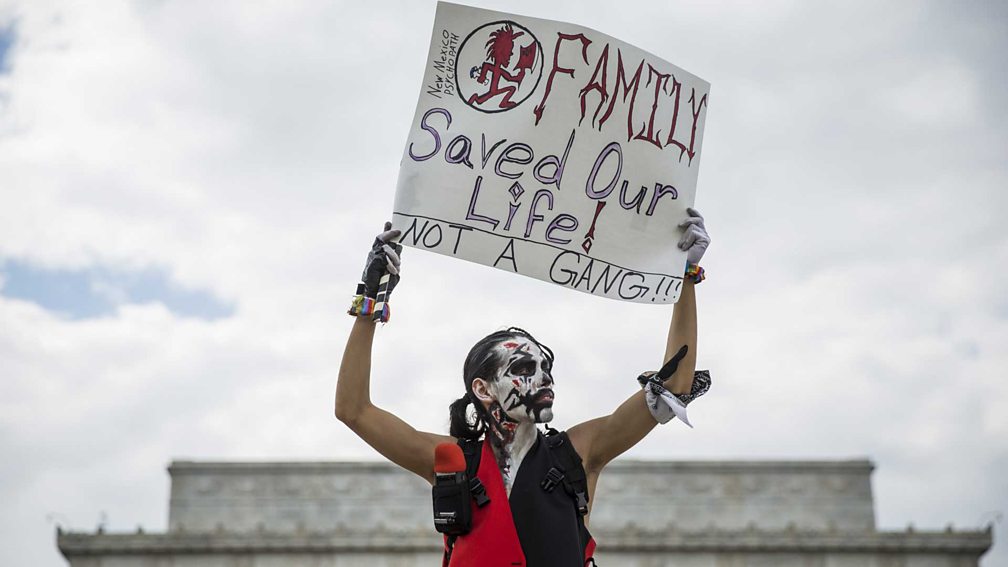 Horror-rap crew Insane Clown Posse inspire a strangely fervent devotion, but it’s not all fun and games for their hardcore fans, the Juggalos. In 2011, the FBI deemed them to be a “loosely organised, hybrid gang” in a bizarre decision that had a real impact on Juggalo life prospects, with some even losing jobs. So in July this year, thousands of Juggalos marched on Washington, resplendent in their characteristic black-and-white facepaint, to demand an end to the gang designation.

"I do know that President Trump really likes meeting and hobnobbing with celebrities," Jason Webber, press officer for ICP’s label Psychopathic Records, told the Guardian ahead of the march. "Well, Insane Clown Posse are celebrities, so, you know, maybe he could invite them to the Oval Office... and everyone can sit around and talk about it. In this modern political climate that we're living in, I actually don’t think such an idea is totally impossible, to be honest with you." He had a fair point there. 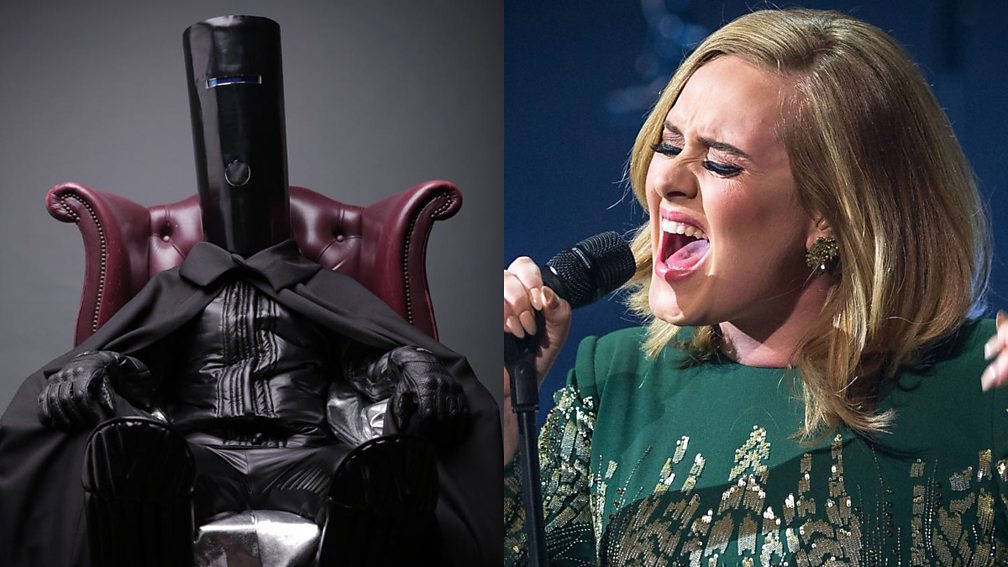 Lord Buckethead has appeared three times to stand against a prime ministerial candidate at a general election: against Margaret Thatcher in 1987 in Finchley, and in 1992 against John Major in Huntingdon. And this year, when Theresa May called on the voters in her Maidenhead constituency, there was Lord Buckethead once more. May rolled her eyes when his name was read out. But Buckethead was unfazed, telling the Guardian: "I just increased my vote share from 1992 to a Lord Buckethead record; she lost her majority. So who should be rolling their space eyes at whom?"

His manifesto included some bold nationalisation policies, including bringing pop asset Adele into public ownership. “She’s too good, too bloody good and Ed Sheeran too, they are money-making machines,” he said. "Bring them in, let’s use their worth to help the country grow." Later that month, Buckethead introduced Nottingham postpunk firebrands and “lovely gang” Sleaford Mods onstage at Glastonbury. He didn't mention any plans to nationalise them, though.

YouTube: Noel Gallagher's High Flying Birds - She Taught Me How To Fly

Steaming full-beef into their third decade of being the best value-for-money interviewees in UK music, Noel and Liam Gallagher provided the usual reliable container ship of lols this year. Things took a surreal turn, though, when Noel performed tracks from his new High Flying Birds album Who Built The Moon on Later… With Jools Holland. Proving (or perhaps sending up) his Joe Meek-worthy psychedelic reputation, he recruited a scissor-player to snip her blank-faced accompaniment to the song She Taught Me How to Fly.

His brother Liam, predictably, was not impressed. When an Oasis fan account asked if he had any scissors in his band, he shot back “I’m afraid not, but I do have somebody sharpening a pencil. Sounds mega with a bit of reverb on it, proper out-there gear”. A few days later, it was clearly still playing on Gallagher Junior’s mind, as he tweeted, “Im looking for somebody to peel some spuds live on stage tonight at this gig in Bethnal Green must have own peeler as you were LG x”

5. Banging beats on the Bakerloo line

There are so many leaky headphones out there that public transport often feels like a mobile nightclub. Why not go all the way, as enterprising MC Harry Shotta did in April, and replace tinny hiss with banging drum ’n’ bass breaks? Shotta held an impromptu rave on a London Underground train, organised for the benefit of Monday evening commuters.

The event, featuring a full light and sound system, got many passengers dancing. Among the most excited accidental ravers were the British transport police, who tweeted “We've just removed a fully fledged rave from a Bakerloo Line tube! All light hearted and very co-operative. #Bakerloo running normally.”

6. Martin Shkreli vs Wu-Tang, round two

Martin Shkreli, AKA “pharma bro” and “the most hated man in America” became famous for buying the rights to a medication used to treat AIDS-related complications and raising the price by over $700 a pill. So when it was announced a month after he came to notoriety that the world’s only copy of Wu-Tang Clan’s secret double album Once Upon a Time in Shaolin had been bought for $2m at auction by none other than the controversial “entrepreneur” himself… it was kind of like Voldemort eating the Golden Snitch.

Wu-Tang themselves weren’t delighted, saying they wouldn’t have gone through with the sale if they’d known about Shkreli’s business practices. Shkreli hit back in charming style, telling Hip-Hop DX “If I hand you $2 million, f****** show me some respect.” Tragically, his business acumen came under scrutiny this year when he was convicted of two counts of securities fraud. In September, he put Once Upon a Time in Shaolin up for sale on eBay, and sold it for a little over half what he paid for it. Wu-Tang were understandably not pleased at this disrespect to their masterwork and took a pop at Shkreli in Lesson Learn’d, released a few days later: “Hater / Wouldn’t last a day in my shoes / You know very well / Bet he swell / You can tell he jeal’ / My price hikin’ like the pills Martin Shkreli sell”.

7. Alice Cooper does some crate-digging

[LISTEN] Does Alice Cooper regret his on stage antics?

You’d expect Alice Cooper to have all sorts of things tucked away in his loft: guillotines, severed heads, snakes. What about a Warhol print potentially worth millions? Turns out Alice and Andy were buddies back in the early 70s, when Warhol did his Little Electric Chair series, based on a press photograph of the Rosenberg executions. Cooper had also recently faked his own chair electrocution on stage in a concert that Warhol had attended. It was a neat crossover, and Cooper’s then girlfriend Cindy convinced him to buy a print for $2,500. The print was forgotten and tucked away rolled up in a tube.

Then in 2013, Cooper’s manager Shep Gordon had a conversation with an art dealer that persuaded him he might want to get Alice to look out for that print. But where could it be? How could they find it? To the rescue came Alice’s dear old mum, who remembered it going into the singer’s tour storage, and the tube was retrieved. The print was sent off to an art dealer, who said that the highest price reached for a print in the series was $11.6m. According to Rolling Stone, Cooper’s response was: “Are you serious? I own that!”

Beyoncé’s Lemonade was one of the defining albums of 2016, so fans were keen to see it released on vinyl. But when they finally got hold of those lemon-yellow records, there was a bitter surprise in store. Due to a “human error” at a German vinyl pressing plant, some fans found that one side of the record was pressed with the album Uphill Battle by Canadian punks Zex, authors of such tracks as Burn The Flag and Steel Gates, and complete strangers to Becky with the good hair.

The mistake first came to light at London’s Rough Trade East record shop, where a staff member did some crafty Shazaming on a returned copy. Some Bey fans were complementary about their punk surprise, Zex guitarist Jo Galipeau told Slate. “It adds to the daily circus that is Zex. I mean this is a regular Monday for us. It's always one weird thing after the other.”

9. All the hip hop boxing matches that never happened

First it was Chris Brown and Soulja Boy with a hot-air argument over Brown’s ex-girlfriend Karrueche Tran and lot of hype talk about a $1m pay-per-view boxing match. Mike Tyson signed up to coach him, and even recorded a diss track. Soulja Boy, meanwhile, got promoter and former world champion Floyd Mayweather on his side, and things started to get a little serious. Someone was going to have to blink, surely? In the end, it was Brown, claiming: "The middlemen people got in the way... because they wanted a piece of the pie. It's immature, first and foremost.” Classic “I would’ve but… and anyway I never even wanted to” stuff.

Meek Mill made an even limper, though higher-priced, attempt to engage Drake in a bout, providing someone would pay $5 million to see it. “Of course I would,” he said in a livestream. “We gonna let Nicki [Minaj] be the ring girl. Y’all would come to see that fight, wouldn’t y’all? Y’all’d spend $100 a ticket for that.” That fight of course, didn’t happen either, and the pair eventually settled their differences once Mill had been sentenced to a prison term for probation violations.

10. Belle and Sebastian get the bus count wrong

Finally, if you’re travelling home to be with loved ones at Christmas or New Year, spare a thought for Belle and Sebastian drummer Richard Colburn, who was inadvertently abandoned by his band at a supermarket in North Dakota on their US tour. Worse: he was in his pyjamas. “I was coming out of the Walmart, and [Colburn] was coming into the Walmart,” frontman Stuart Murdoch told Minnesotan radio station The Current. “He was waving very happily, in a good mood. And that was the last time that we saw him.”

The band had, said Murdoch, become “blasé” with their bus-check in system. After some frantic tweeting, they managed to get Colburn a ride to their next gig in Minnesota, and immediately adopted a new system.