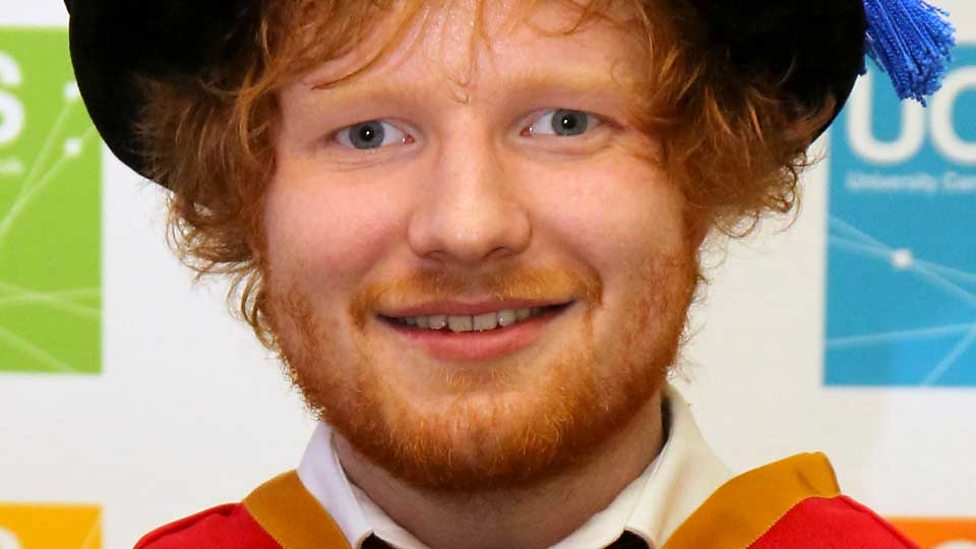 As an artist who made his reputation by playing literally anywhere that would have him, Ed Sheeran has appeared in some very odd places in his time. From the pub at the end of your street to Madison Square Gardens, from Wembley Stadium to the inside of your kitchen cupboards (given half a chance).

Now that he's taking a break from social media and the public eye, here are just a few unexpected places in which we've found him:

1. At a house party in Norwich

Our first sighting of Ed comes courtesy of BBC Introducing in Norfolk, who followed him to a Norwich house party in 2011, during the years when he would play anywhere he could in a canny attempt to make friends and gather fans onto his mailing list. As a record of his humble beginnings, this clip becomes all the more remarkable with the passing years, especially as it provides an early appearance of his breakthrough song, The A Team.

(David Attenborough voice) Here we see a rare sighting of the lesser-spotted Sheeran in the wild. Experienced Edwatchers will recognise the trademark orange plumage, and distinctive song. Experts believe this musical display - loosely translated as "you need me, I don't need you" - is a way of establishing his dominance as he enters new territory and sending a warning message to potential rivals.

2. In a dorm room in Falmouth

It is June 2011, and that song we saw Ed performing in front of 30 people in a house has just entered the charts at No.3. So when Reggie Yates calls to congratulate our hero on the good news, is he at home? On a tour bus? In a bar with his colossal entourage? Nope. He's made a little nest for himself in the student dorm room of a friend of a friend at Falmouth University, while getting ready for (yet) another gig.

It's not nice to be not nice

This is a match made in heaven: Radio 1's Greg James likes to surprise people with phone calls from famous people, and Ed likes to surprise fans by suddenly appearing in their faces and being a nice man. Highlights from this chat to the very excited Claire (who works in marketing) include her self-depreciating fluster, "Why am I telling you this? You don't care!" to which Ed replies, "I DO care, I asked!"

And the quote that must surely be the motto of the Sheeran clan: "It's not nice to be not nice."

It's not nice to be not nice

5. In a video spoofing his video

To promote the 2014 BBC Music Awards, Greg James paid tribute to some of the biggest videos of 2014. There's the ballerina costume from Taylor Swift's Shake It Off, Meghan Trainor's All About That Bass powder blue dress and a sincere approximation of the key moments of Nicki Minaj's Anaconda. Then there's the Thinking Out Loud section, in which Greg plays Ed (and a ukulele), and then Ed plays Ed (and a guitar).

The sweetest moment in this quiz between Taylor Swift and Ed, in which they play Eds or Taylz - a friendship version of the 1970s TV show Mr & Mrs - is when Grimmy asks Ed to name the moment he realised he was becoming proper friends with Taylor. She takes the self-depreciatory route, claiming he might have taken a while to grow to like her, and when he picks the day they met, she's overcome with delight. That's true friendship.

Despite having left school at 16, and playing truant a fair amount in the years leading up to it, Ed was awarded an honorary degree by University Campus Suffolk in October 2015. In his graduation speech he acknowledged that he had chosen to follow his own path, but offered graduating students this hard won wisdom: "There's no key to success, the key to failure is trying to be everyone else."

8. At a cattle auction

Honestly, this is the FUNNIEST 3 minutes of Ed Sheeran you'll EVER watch!

A week or so before the graduation ceremony, Ed turned up at Harper Adams University for Scott Mills's Student Tour. Among the many delights in this interview (in which he reveals that he gets text messages from Jedward, the true depth of his feelings for ketchup, and that he also turned up at Ronan Keating's wedding), is the moment when Ed is sold off in a cattle auction for £12,000, and then starts to haggle with the auctioneer.

9. Wherever one of his songs is being sung

We've all seen the YouTube clips of Ed joining in whenever he discovers a busker singing one of his own songs, but this is special. In the documentary Tourettes: Let Me Entertain You, Reggie Yates encouraged six young people who all have Tourette syndrome to put on a show. Fifteen-year-old Jake, who is so frustrated with his ticcing he has punched a wall, is running through The A Team, when a familiar face suddenly appears...

10. Having his first driving lesson on Top Gear

Other guests appear on Top Gear to talk through their long and varied driving history, with a few tales of embarrassing wrecks they've owned and the one true four-wheeled love of their life. Ed, on the other hand, turned up in January 2015 having never driven a car before in his life, or even sat in the driver's seat. How did he do? Well, he wasn't the worst, which is remarkable given the amount of times the car's wheels left the Top Gear track.

...But not on social media

Of course, he says he'll be back in the autumn, but that could just be a ruse to throw fans off the scent. Be alert, check behind the sofa, you never know where he'll pop up next, as footballer Alan Shearer discovered over the weekend: