What rare and priceless instruments do the stars of the Proms play?

Great soloists aren't defined by their instruments, but many will go to extreme lengths to make sure they are matched with the perfect violin, or cello, or trumpet. This often involves spending thousands, if not millions, on rare historical pieces that have been passed from virtuoso to virtuoso for hundreds of years. Or, a musician can hope a wealthy owner will lend them an exceptional instrument, which happens often and sometimes anonymously.

Here are eight instruments that the soloists of the Proms 2017 play, and the fantastic stories that go along with them...

The German violinist plays the Sleeping Beauty Stradivarius, made in 1704 and currently on loan from the German banking group Landesbank Baden-Württemberg.

As the New Yorker reported in 2010, it was bought by the aristocratic German Boeselager family in the 1720s and kept in mint condition for almost 300 years. It was discovered in the family bank vault in 1991, along with its deeds of authenticity. Because it had lain dormant for so long, and supposedly never used as a concert violin, it was called the Sleeping Beauty.

Adding to its intrigue, a descendant of the family, Philipp von Boeselager, was part of two plots to kill Adolf Hitler, one of which was supposed to involve him personally shooting the dictator and his successor Heinrich Himmler. 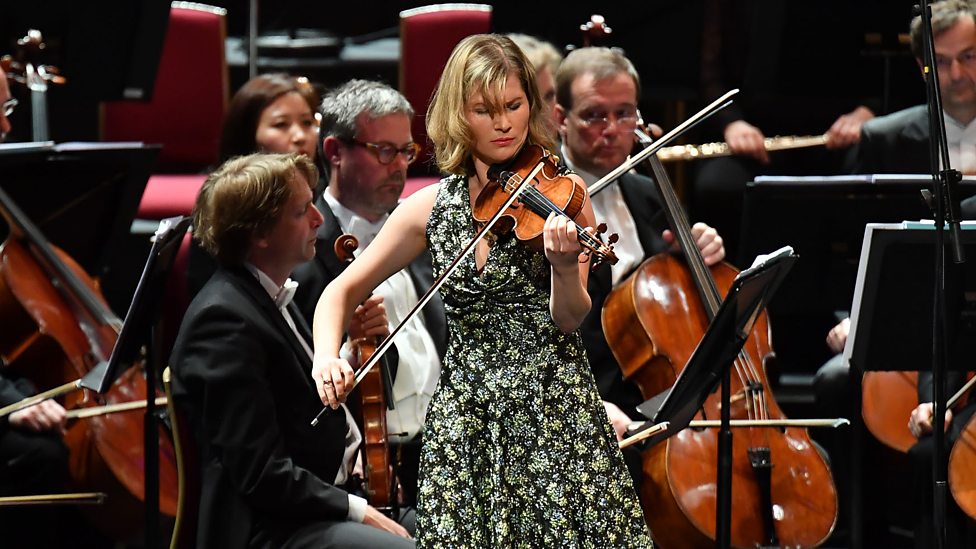 The Georgian violinist plays a 1739 Guarneri del Gesù owned by a collector and loaned to her. Coming from a distinguished Cremonese family of instrument makers, Giuseppe Guarneri (nicknamed del Gesù - "of Jesus" - because his labels after 1731 incorporated Christian symbols) is commonly considered to be one of the top two best violin makers ever - slightly behind, tying with, or nosing just in front of his contemporaneous rival Antonio Stradivari, depending on who you are talking to.

Batiashvili, who has played two Strads in the past, appears to not be particularly interested in the story of her Guarneri del Gesù. "This violin was so fantastic, I didn't care who was playing it before!" she said in a 2016 interview with Violinist. "I'm sure that great people played it, though, because the sound is always influenced by the people who play on it. I could tell that this instrument had been in good hands."

The current record for most-expensive violin ever sold is held by a Guarneri del Gesù - the Vieuxtemps. As the Economist reported, it fetched over $16m when it was sold to an anonymous buyer in a private deal in 2012. It had previously been played by Yehudi Menuhin, Itzhak Perlman and Pinchas Zukerman.

Last year's BBC Young Musician winner first played his current cello, a 1610 Amati, during the final of the competition. He performed with it again at his Royal Festival Hall debut in September, on loan from north London instrument dealer Florian Leonhard. Then, an anonymous benefactor bought it for what is believed to be a six-figure sum so he or she could ensure the teenage cellist could use it for life.

The makers of this instrument, Antonius and Hieronymous Amati, were part of the oldest significant luthier dynasty in the world, stretching back to the middle of the 16th centuty. They essentially invented the modern shape and set-up of the stringed instrument as we know it, and Stradivari learned his trade in their Cremona workshop.

The Nottingham cellist said of the instrument: "I am thrilled that I can continue to develop my relationship with this cello, making the sound more completely my own over time. This rare instrument will grow with me and respond to what I need to express and I could not be more happy and excited."

At more than 400 years old, his cello is the oldest instrument played by a soloist at this year's Proms.

Christian Scott, trumpet, his own range of self-designed horns

[WATCH] Prom 53: The best of Beneath the Underdog, Charles Mingus Revisited in three minutes

New Orleans trumpeter Christian Scott - playing at Prom 53: Beneath the Underdog, Charles Mingus Revisited on 24 August - must be the only soloist this season who designs his own instruments. And, like Strads, the Grammy-nominated player's horns have individual names.

Apparently, having never especially liked the sound of the trumpet (he chose to play it so he could complement his renowned saxophonist uncle, Donald Harrison), Scott began to sketch designs for instruments that would sound more similar to other members of the brass family. The Siren is designed to achieve aspects of the trumpet, cornet and flugelhorn, and is played without a mouthpiece. The Reverse Flugel has the range of a trumpet, and avoids the shrillness associated with a flugelhorn's higher register, while also intensifying its trademark "dark" sound. One, the Isadora, is named after Scott's wife. They are built by the Dutch makers Adams Brass.

The Gariel Strad of 1717, which was worth £6.3m in 2012 and will only increase in value, was loaned to Benedetti by the Bank of America's European president Jonathan Moulds after he heard her play.

It is exactly 300 years old, and was made during the height of what people call Stradivari's "golden period" (roughly the first 20 years of the 18th century). It is considered to be among his 30 best violins, and therefore one of the finest instruments ever built. Violin dealer Luigi Tarisio (1796-1854) - one of originators of the craze for Stradivari collecting - bought it and sold it to Jean-Baptiste Vuillaume (who made the instrument that was played by Norwegian virtuoso Vilde Frang at Prom 26). It's named after the French engineer who bought it from Vuillaume in 1881, Charles-Marie Gariel.

Pianists stand alone in the world of concert soloing in that they don't take their instruments on tour; not unless they're the Russian-born American giant Vladimir Horowitz (1903-89), who towards the end of his career paid thousands to have his half-tonne Steinway disassembled and shipped to each one of his concerts.

This season, soloists at the Proms such as Igor Levit (Prom 1), Beatrice Rana (Prom 13) and Stephen Hough (Prom 20) have played a nine-foot Steinway Model D Concert Grand, with the legendary Sir Andras Schiff (Prom 73) still to perform (although last year he requested a Bösendorfer for Beethoven's Emperor Concerto).

Model Ds are regularly worth more than $150,000, with some having been sold at auction for upwards of a million. The Alma-Tadema Model D, an ornate historic piano, fetched $1.2m at auction in 1997, and George Michael bought John Lennon's upright Model Z for £1.67m last year, as the Independent reported.

In 2004, Steinway estimated that 90 per cent of concert pianists either owned their own Steinway or were in some way affiliated with the company.

The American plays a 1723 cello made by Domenico Montagnana, which she co-owns with an anonymous party. Venetian luthier Montagnana is considered one of the finest makers of cellos ever, his instruments being shorter but broader than those by his Cremonese counterparts Stradivari and Guarneri del Gesù.

As a generalisation, Stradivari and Guarneri cellos are precise and deliberate; Montagnana pieces are considered more bold and improvisatory. Yo-Yo Ma once owned the 1733 Petunia Montagnana and Russian cellist Boris Pergamenschikow played a 1735 Montagnana, which was named after him. The record auction price for one is just shy of $1m.

[WATCH] Joshua Bell on his Gibson ex-Huberman Stradivarius, which he first played at the Proms

The Grammy-winning star violinist plays the Gibson ex-Huberman Strad, which has a well-documented and thrilling history.

It was built in 1713, making it a golden-period Strad, and was stolen not once but twice from its famous 20th-century owner, the Jewish-Polish violinist Bronislaw Huberman. Director Chaim Hecht made a documentary about it in 2012, The Return of the Violin, which explores the instrument's history, Huberman's stance against the Nazis and his founding of the Israel Philharmonic. It features a performance Bell gave in Częstochowa, the town of Huberman's birth.

The first time it was stolen it was quickly returned. But in 1936, as Huberman played Carnegie Hall with another violin, the Strad was stolen from his dressing room by unfulfilled Juilliard School alumnus Julian Altman. Forty-nine years later - two days before his death - Altman told his wife that the violin he had been playing for years was Huberman's Strad. When an opportunity to buy it arose, Bell clubbed together £4m, selling his previous £2m Strad, the Tom Taylor, to raise the money.

Joshua Bell is the soloist in Lalo's Symphonie espagnole at Prom 43, 17 August