The art of hiding secret messages, jokes and references in an album cover might seem to be dying out, given that streaming services don't really render the artwork at the kind of resolution that facilitates close study. But as anyone who got caught up in 2015's blue dress/white dress palaver will tell you, perception can easily be altered if you stare at something hard enough. Add a musical soundtrack and who knows where you'll end up...

Here are a selection of albums that came wrapped in images that have, by accident or design, attained some kind of intrigue or significance. 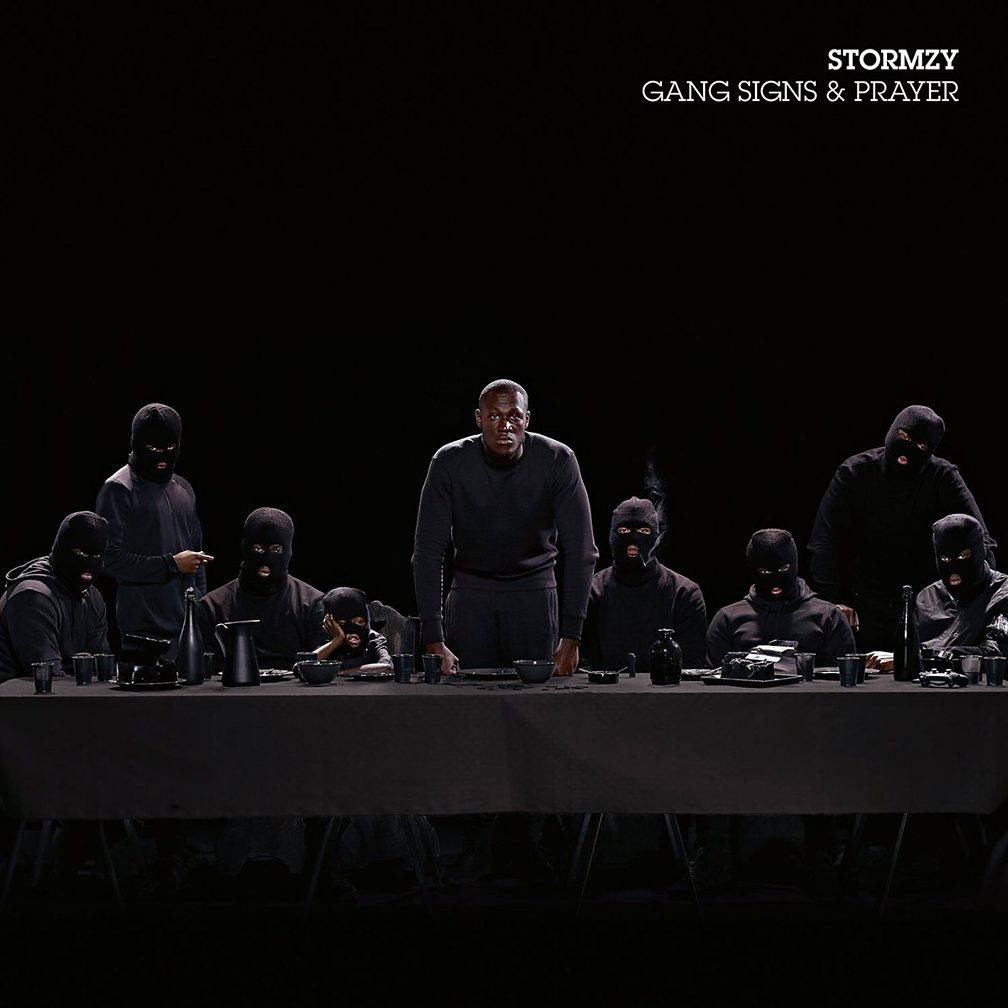 And what a sumptuous feast to begin with. Stormzy's debut album cover is not exactly colourful but that doesn't mean it's not vivid. Among the items on the black tablecloth, there are black bottles, black cups, black bowls, black plates, black boxes with black food inside, a black water jug, a black ashtray and a black lighter, black cutlery, all-black dominoes and on the far right, a single all-black games console controller, but no black console. Or black games. Let's hope their TV is colour.

But what does it all mean? Well, it's a very literal depiction of the album title, an image that nods to a stereotype of black gang culture, all balaclavas and angry stares, but one modelled after a more holy vision - Leonardo da Vinci's Last Supper, with Stormzy taking Christ's seat at the table. Unlike in Leonardo's original, Stormzy's disciples aren't bickering among themselves, are all dressed for inclement weather and you, the listener, appear to be taking part in the most intimidating job interview in human history.

Mixing the devout with the hardcore is a subtle nod to the album's least likely song Blinded By Your Grace, a devotional moment of faith amid Stormzy's more traditional grime bangers.

2. In Rainbows by Radiohead 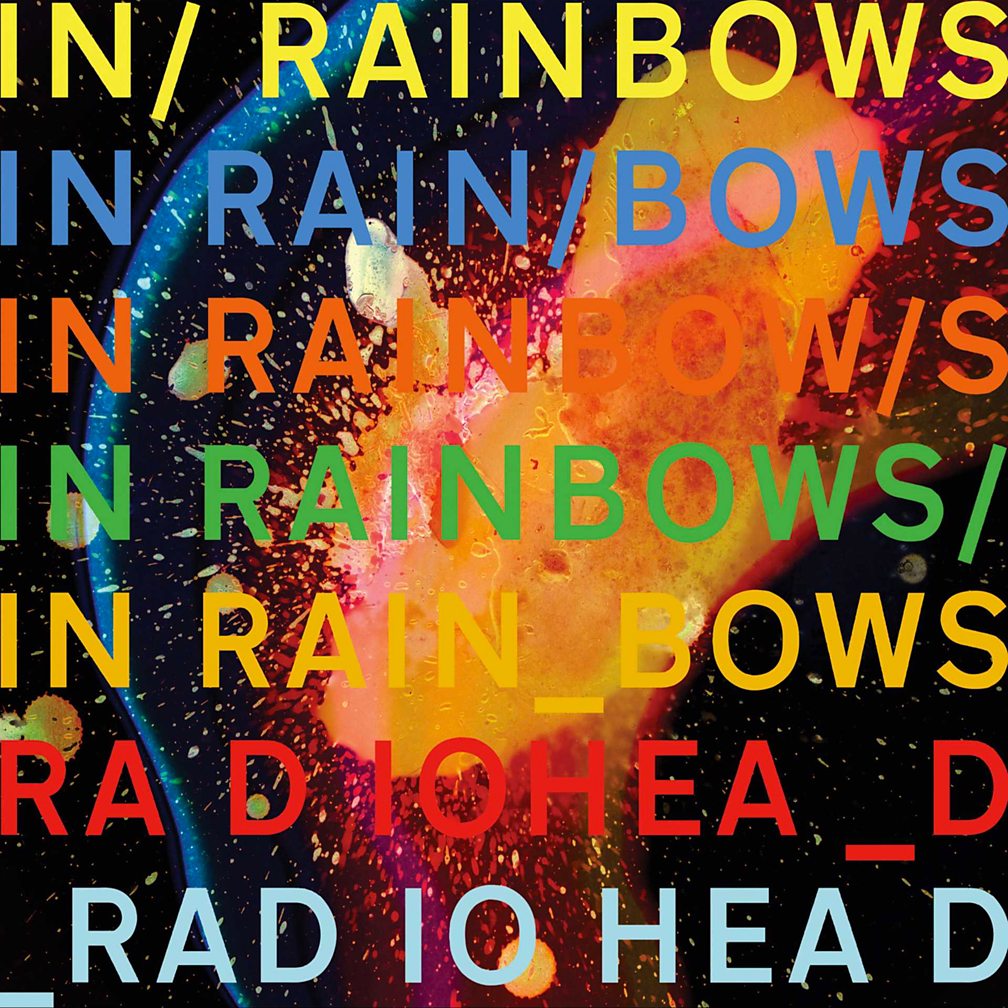 Let's face it, Radiohead fans are going to read significance into everything whether the band wants them to or not. But there are so many signs and signifiers around the release of 2007's In Rainbows that at least some of it must be on purpose. Look at the way the letters are arranged at the bottom of the cover, for starters. It's to emphasise the number 10, also the number of letters in the album's title. And In Rainbows came out on October 10, or 10/10, having been announced to the world just 10 days earlier with a series of 10 cryptic messages leading up to the big day.

So what? There's a fan theory that this is to highlight that In Rainbows is a companion album to OK Computer (working title: Zeroes and Ones, which is 01 in numerals). In fact, some fans claim that the first five tracks on In Rainbows were sonically designed to be combined with the first five songs on OK Computer, starting with Airbag, then 15 Step and alternating onwards until you stop at Karma Police. With a 10-second crossfade between songs, they seem to blend together naturally, as if on purpose.

Also, if you look at the yellow blob behind the R of the red Radiohead, it looks a bit like a balloon with a smiley face drawn on it. Spooky, eh? 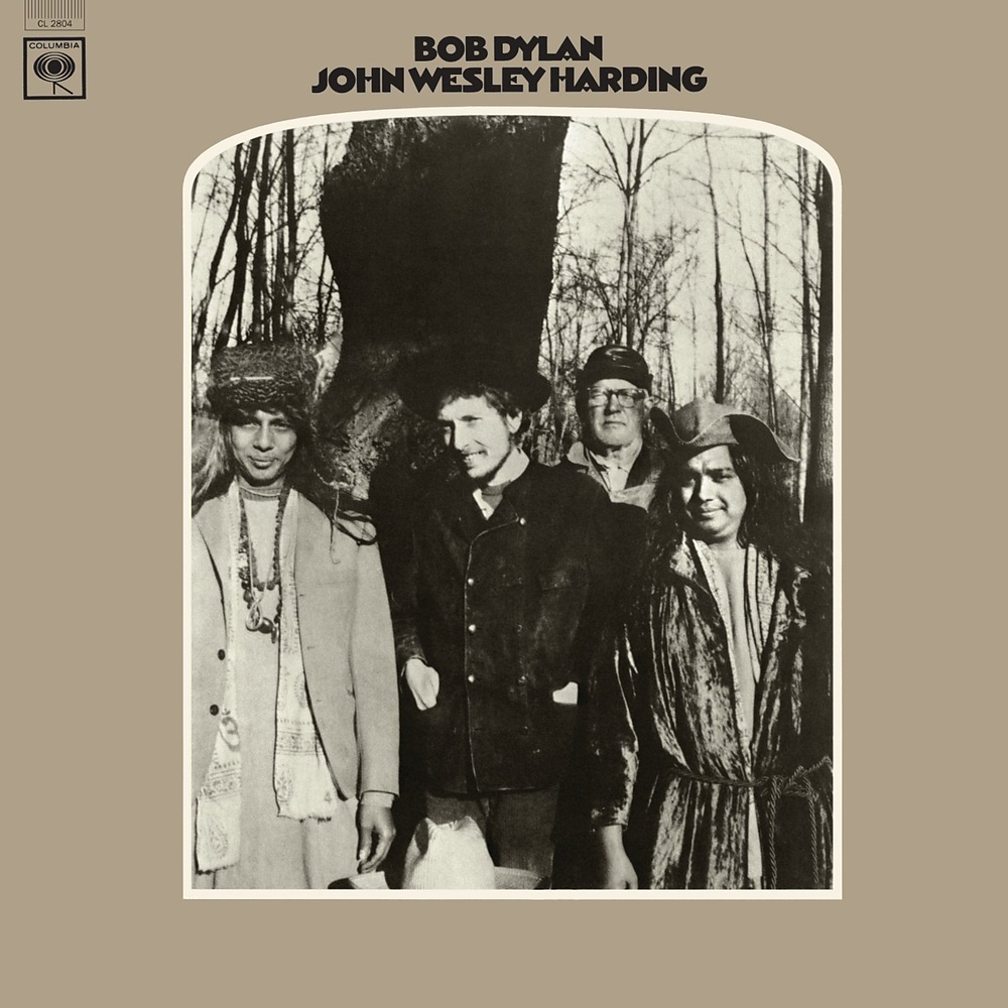 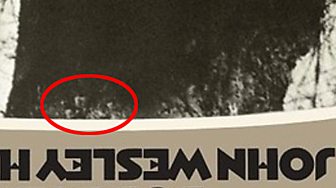 The Beatles, hidden in plain sight

Matching Radiohead fans for both tenacity and tenuousness, Bob Dylan fans are arch cryptographers who see significance in the tiniest things. But this is perhaps a peak moment in looking for things that aren't there, unless they are.

When The Beatles released Sgt. Pepper's Lonely Hearts Club Band, another pored-over album cover, there was a doll wearing a jumper emblazoned with the message "Welcome the Rolling Stones". To repay the favour, the Stones hid images of the faces of the four Beatles on the cover of Their Satanic Majesties Request. Fans started seeing Beatle faces everywhere, including in the knobbly tree bark on the cover of Bob Dylan's John Wesley Harding, but only if you hold the album upside down.

This revelation, while persuasive, came as a surprise to John Berg, who had taken the Polaroid picture used for the cover. The Telegraph asked him about it in 1995, and he admitted he had to go back to the original print to check what the fuss was about: "Well, I had a proof of the cover on my wall, so I went and turned it upside down and sure enough . . . Hahaha! I mean, if you wanted to see it, you could see it. I was as amazed as anybody."

The Beatles, hidden in plain sight 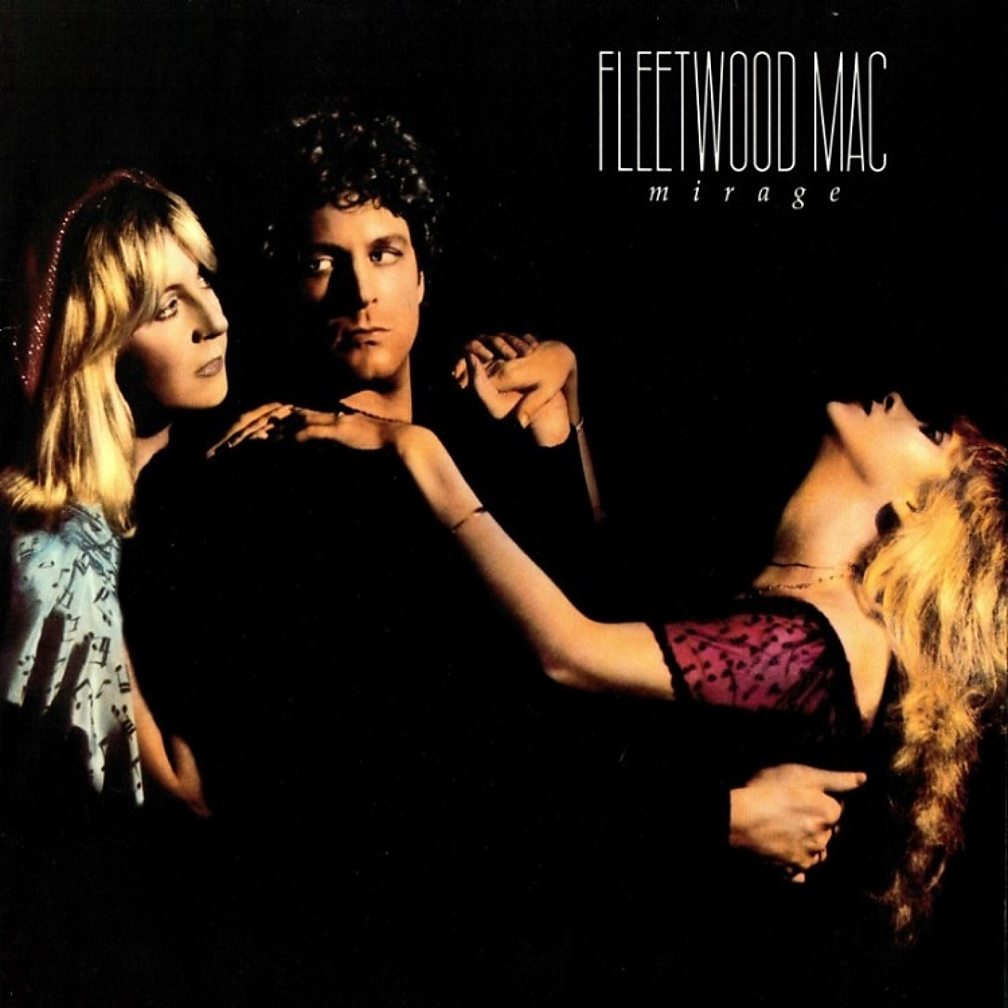 This one is probably as much a by-product of the name of the album as it is a genuine mystery. Fleetwood Mac fans claim that if you look hard enough at the hands of Lindsey Buckingham and Stevie Nicks, you can see a face. Lindsey's thumb is the nose, with Stevie's thumb being the lower jaw and chin, the upper part of the head is supposedly covered by a black cowl or hood. Once you've spotted it, it's tempting to read further narrative into the facial expressions of the band members, with Lindsey turning to Christine McVie as if to say, "You see? She's here again!" and Stevie throwing her head back in exasperation because, let's face it, it's clearly just some hands.

5. To Pimp a Butterfly by Kendrick Lamar 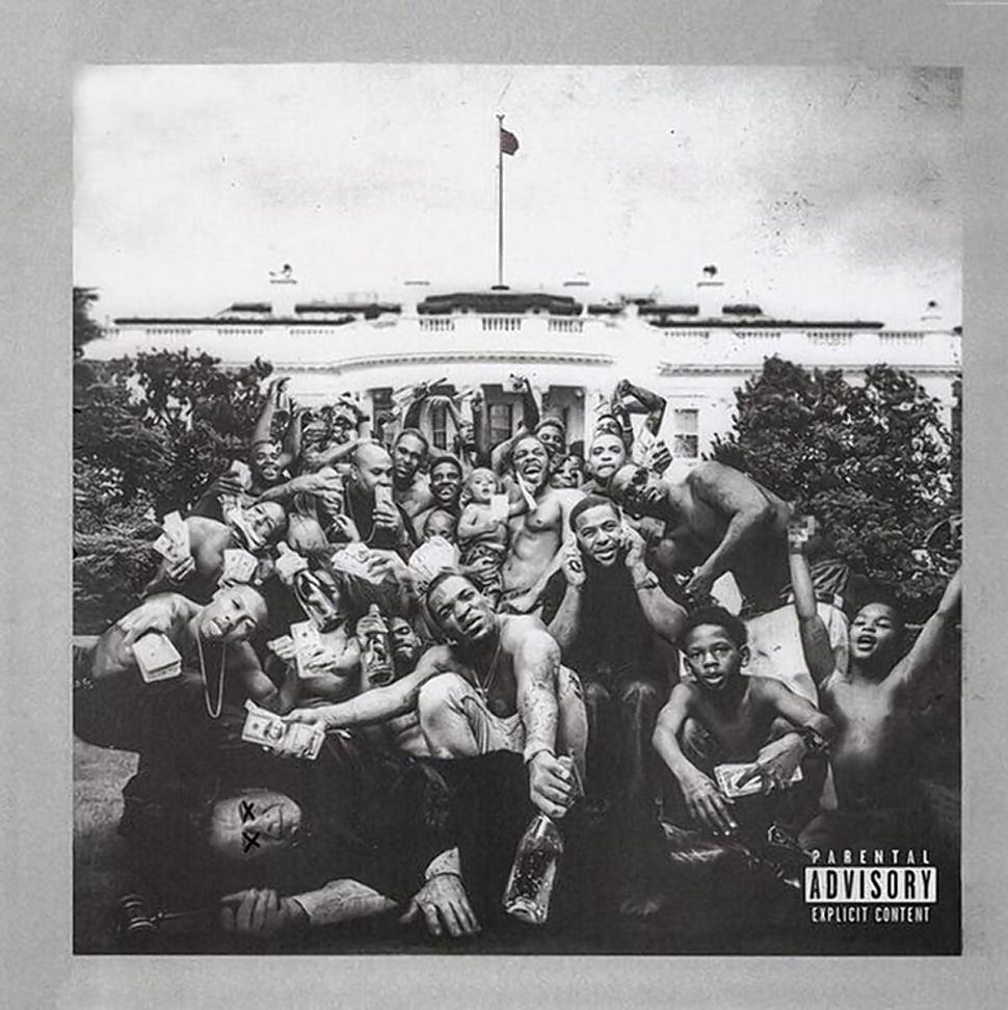 Few album covers have provoked a reaction as visceral as that of Kendrick Lamar's To Pimp a Butterfly. While Stormzy's intimidating gang symbolism is intentionally undercut by nods to Christian faith, Kendrick shows the violent aftermath of a revolution, in which a judge lies dead with his gavel in his hand, at the feet of a victorious pile of mostly topless black men and children, standing in front of the White House and brandishing money gleefully at the camera.

Devoid of context, it could be seen as simply a shocking image for an album cover. Throw in the album's title, though, which deliberately echoes Harper Lee's To Kill a Mockingbird, and the statement about a growing mood of outrage among America's black communities towards law enforcement agencies - the album was released in 2015, as debate raged about the Black Lives Matter movement, which was explicitly critical of police and the American judicial system - becomes much clearer. 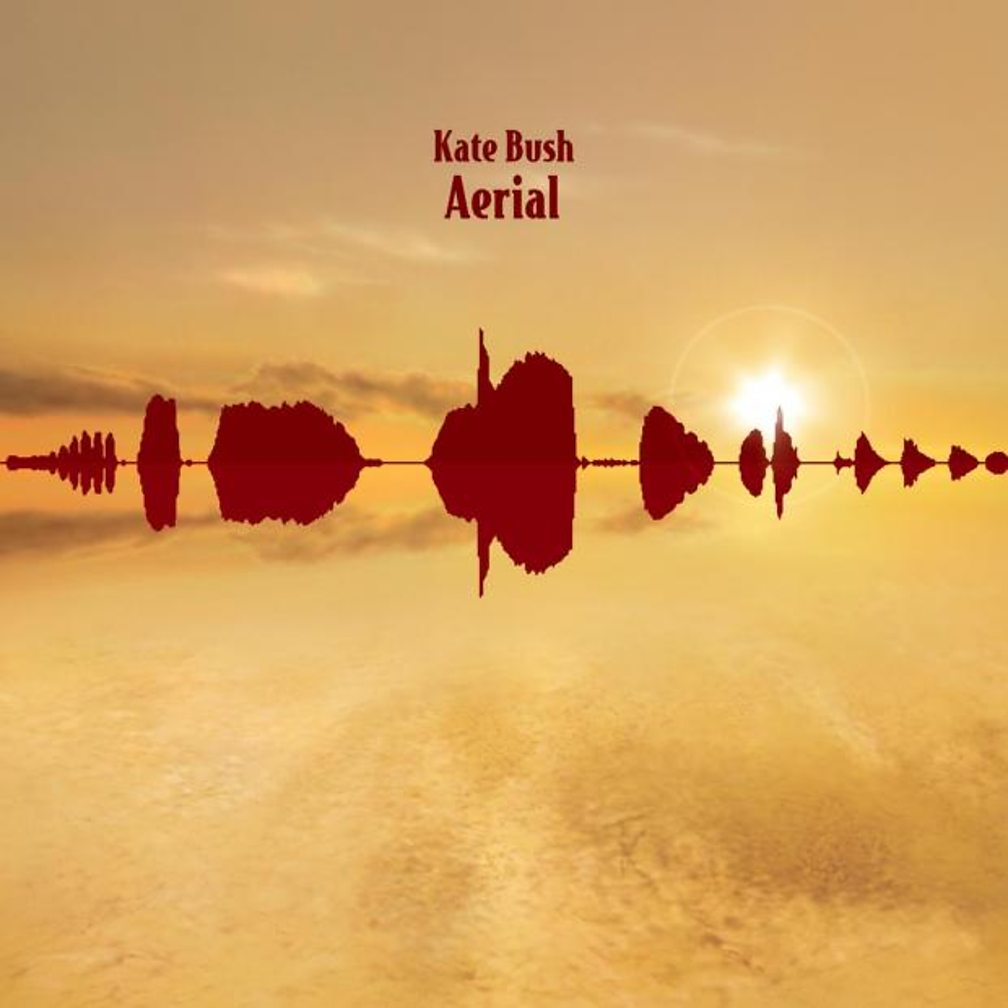 It would be enough, some might say, to create an image for the cover of your album which could either be a mountain range reflected in an unearthly yellow pool, or (more accurately) the waveform image of the sound of birdsong that has been set against a whooshy sky-type background with what looks like a bright sun on the 'horizon'. Adam Kempa, a fan, actually recreated the sound from that soundfile by manipulating the photo and running it through software designed to turn visuals into noise.

But apparently there's more. Some Kate Bush fans also claim to be able to see a reclining woman's face in the clouds in the bottom right hand corner. Her two eyes are underneath the central 'mountain' waveform with the big chimney on it. There's even speculation that it's Kate herself, although it's hard to be empirical when dealing with visions from the clouds. Kate has remained quiet on the subject. Let's call this one a draw. 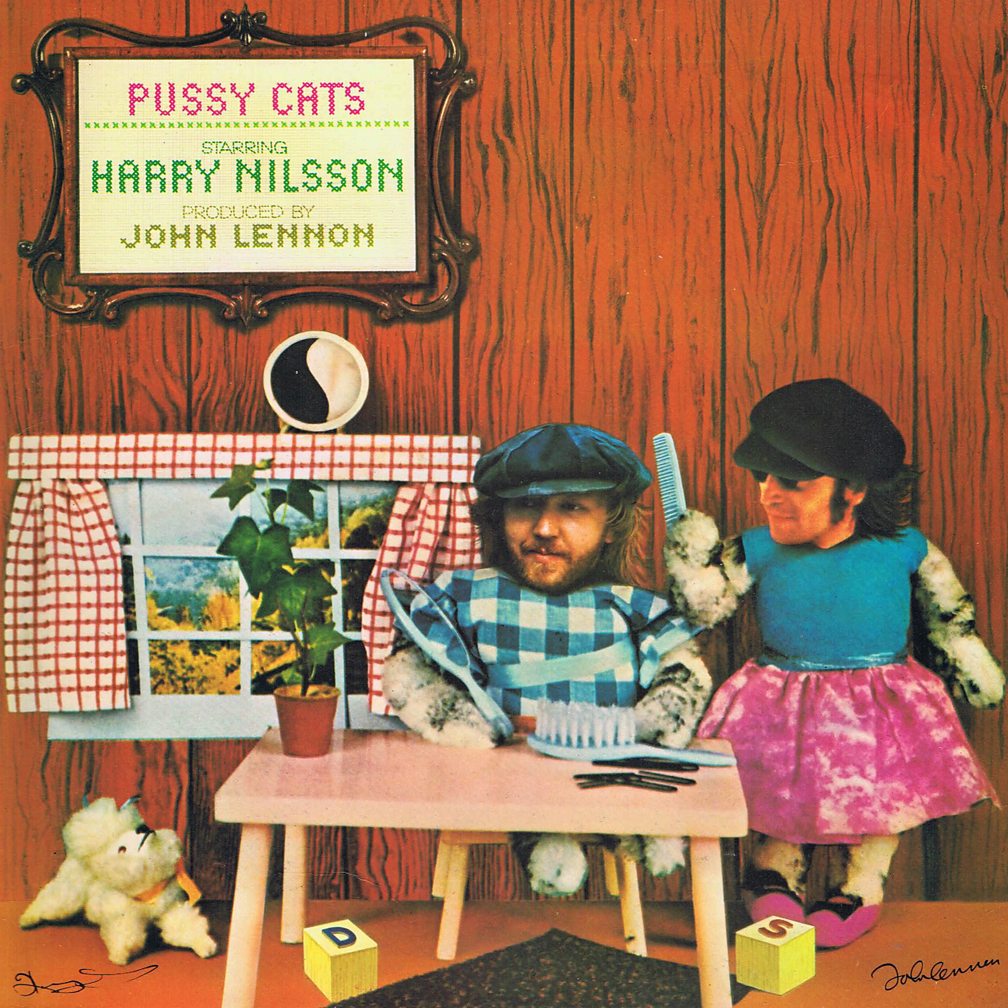 This one is definitely on purpose. The cover of Pussy Cats - an album all concerned remember as being made while partying extremely hard - looks initially like a charmingly child-friendly image of domestic bliss between two teddy bear rock stars and their pet poodle. Harry Nilsson bear is having his fur combed by John Lennon bear, and they both look rather pleased with themselves.

But what's this under the table? Wooden blocks with the letters D and S uppermost, on either side of a small rug. Reading from left to right, it spells out D - rug - S, a hidden adult joke snuck past the record company, who, according to Ultimate Classic Rock, had baulked at Harry's original title for the album, Strange Pussies. 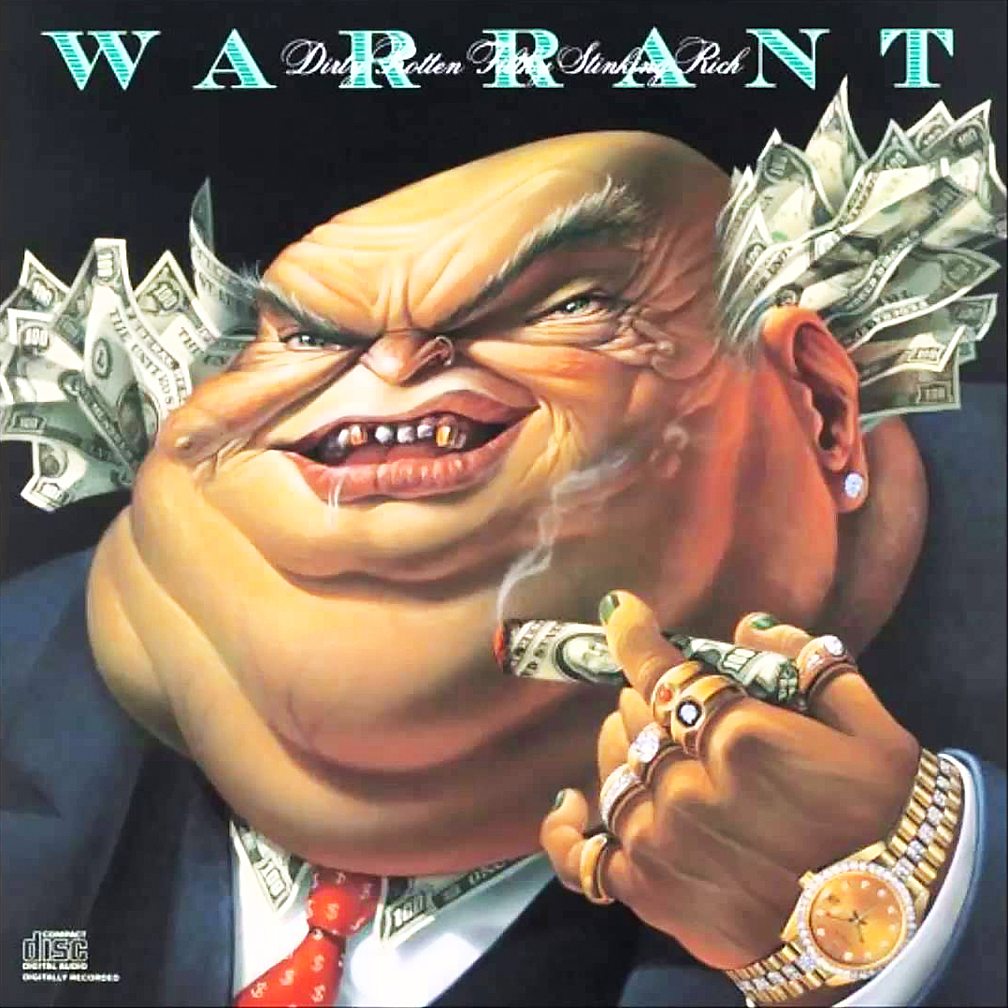 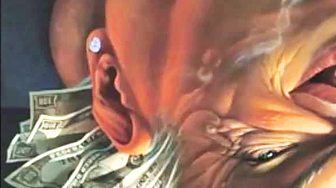 Not an especially subtle image, this. Warrant's debut album boasted a painting by Mark Ryden, depicting the fattest of all fat cats, a man called Fugazi (according to the album sleeve notes), who grows dollar bills out of his head, smokes a dollar bill cigar, has a dollar bill shirt collar and dollar sign tie, has gold teeth and wears a diamond earring. For a hungry band hoping to make their mark, it's a statement of naked ambition, riddled with disgust.

There are two hidden details that you can only see if you turn the album upside down and look at the portly tycoon's ear. Around the edge of his ear-hole, there's an image of a woman, whose head is just below the diamond earring, and her hair tumbles down the side of his temple. So, an unabashed image of the rewards available to would-be rock stars, right? Well, not quite. Just across from the ear lady, there's also a very angry looking bird leaning in to peck this fellow's eye out. 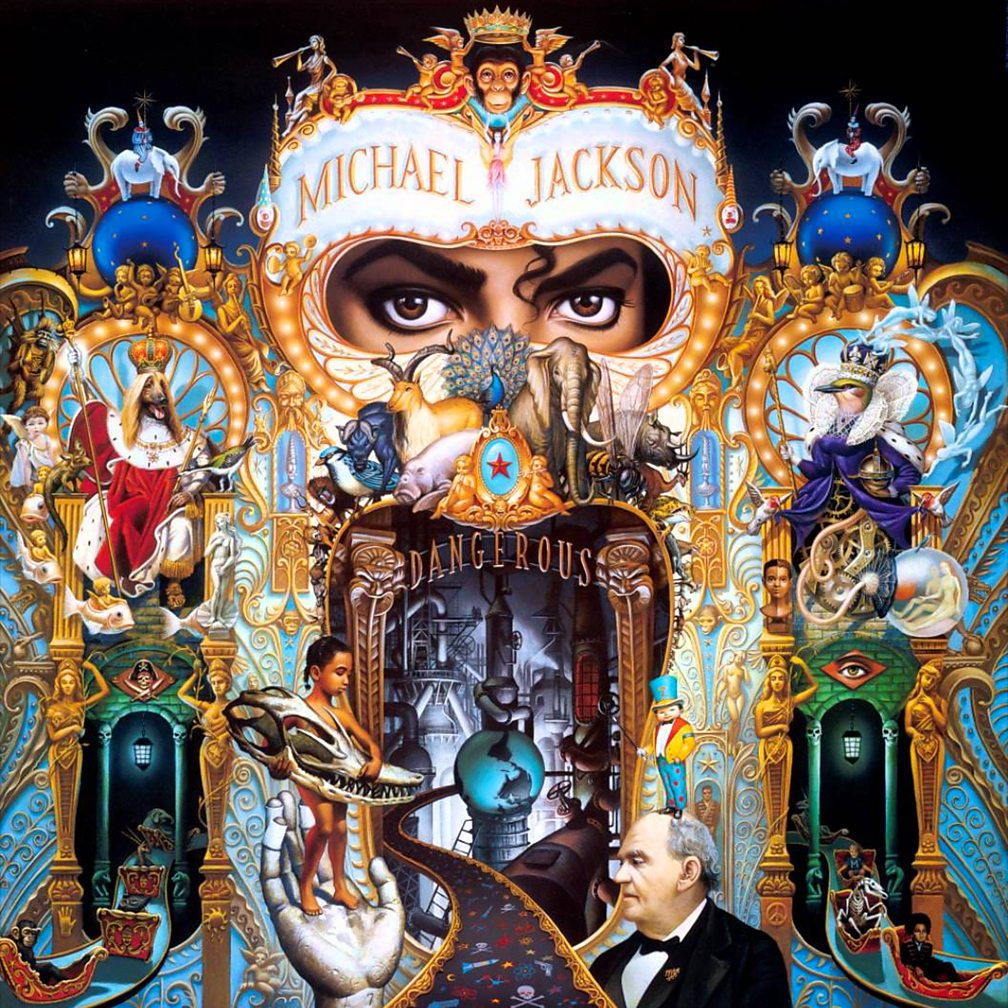 A second entry by Mark Ryden to this list, and this time there is an astonishing firework display of symbolism on offer. The theme appears to be the discord between a life in showbiz - with dog kings and bird queens and regal white elephants being ridden by clowns - and its dark underbelly. PT Barnum, the great circus entrepreneur, appears at the bottom, opposite a child holding the skull of a great beast. There are elements recognisable from the tabloid view of Michael Jackson's life - the Neverland rollercoaster, the crowned chimpanzee above his eyes, the regal portrait - but his body is mostly hidden.

Ryden has depicted Michael - the most famous person in the world at the time - as a guarded circus artist who has seen glory and the machinery involved in making it happen. Fans have scoured the cover for signs and signifiers, claiming references to everything from the Masons to the Illuminati, but the most likely explanation is that Michael felt a bit trapped by all the hoopla and wanted to tell people that fame isn't everything, while maintaining his position as King of Pop. 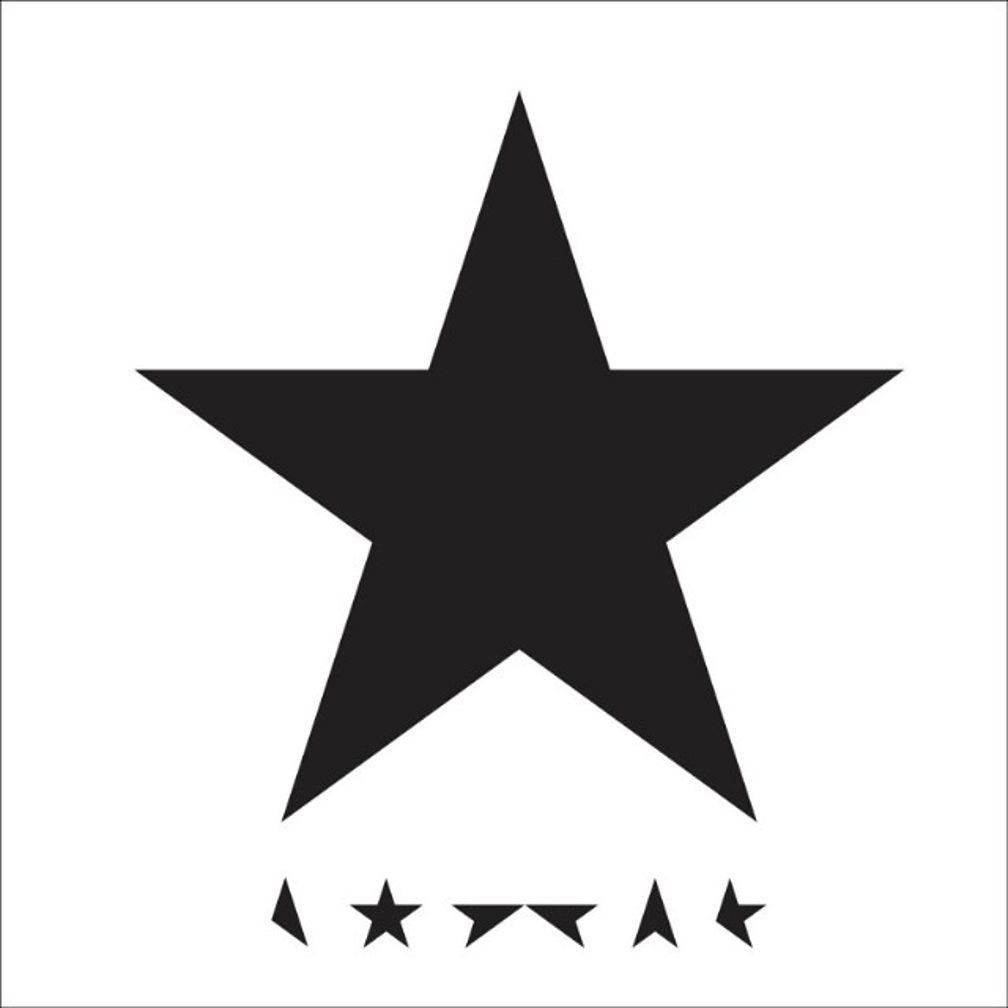 Thanks to a revival in vinyl sales and the tragic circumstances surrounding its release, no album has been as ripely mined for information - Easter eggs, design clues, hidden messages - as Bowie's Blackstar. Some are easy to spot - those fragmented stars at the bottom of the cover spell out 'Bowie' - and others require special equipment. The album is said to glow blue under ultraviolet light, stars appears if you leave the sleeve in direct sunlight and if you connect the biggest dots of the constellation that appears, you can draw a pretty convincing star man (waiting in the sky).

Spin collated most of the effects people have found by playing light across the surface of the vinyl too, but fans are warned not to devote too much energy to hunting for answers online. The album's designer Jonathan Barnbrook recently told NME: "There is something else which I may reveal in future, I may not. The thing is, it’s not a competition. It’s like 'oh, you’ve discovered it, here’s your prize'. We live in a world where everything is verified by going online. People tweet me, and I don’t answer them. I think the creative process of putting those elements together and coming up with a reason what the secret message is, actually is something that he absolutely would have approved of."