The 7 most awkward campaign songs used by US presidential candidates 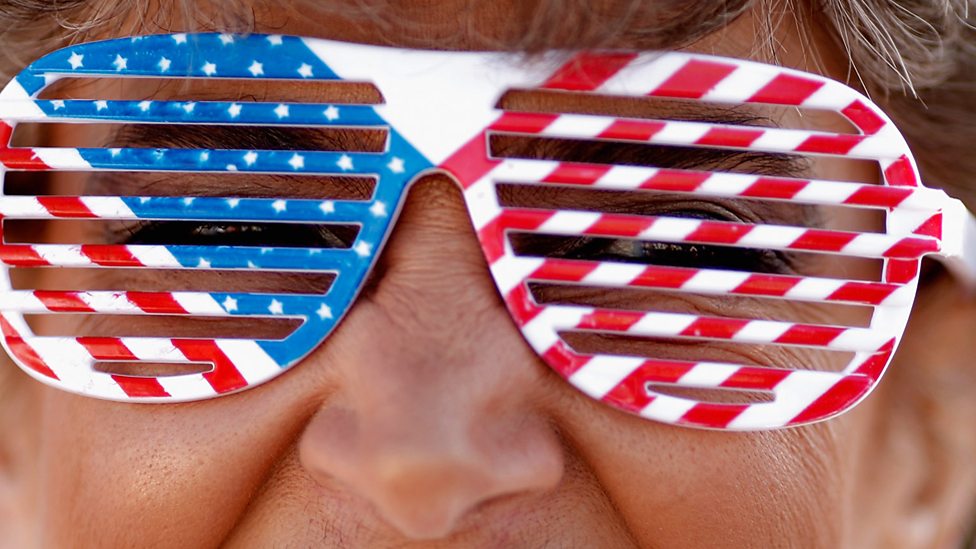 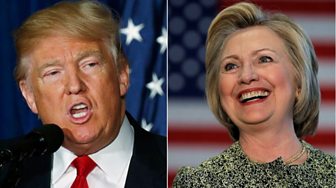 Music and politics have always had a strained relationship, particularly in America, where barely a week passes in an election cycle without a rock star complaining about their song being used at a rally or a politician licensing music with accidentally inappropriate lyrics.

Regarding the latter, candidates know that it's the over-riding slogan of a song that has political value - like, "Don't stop thinking about tomorrow!" from Fleetwood Mac's Don't Stop (as used by Bill Clinton) - and not a line tucked away in verse four that could be interpreted as being off-message.

It should be easy to pick something perfect, right? You'd think so, but plenty of presidential hopefuls have made a mess of things, as we'll now find out. (And, by the way, Ronald Reagan never campaigned with Bruce Springsteen's anti-war song Born in the U.S.A., despite many people thinking so.) 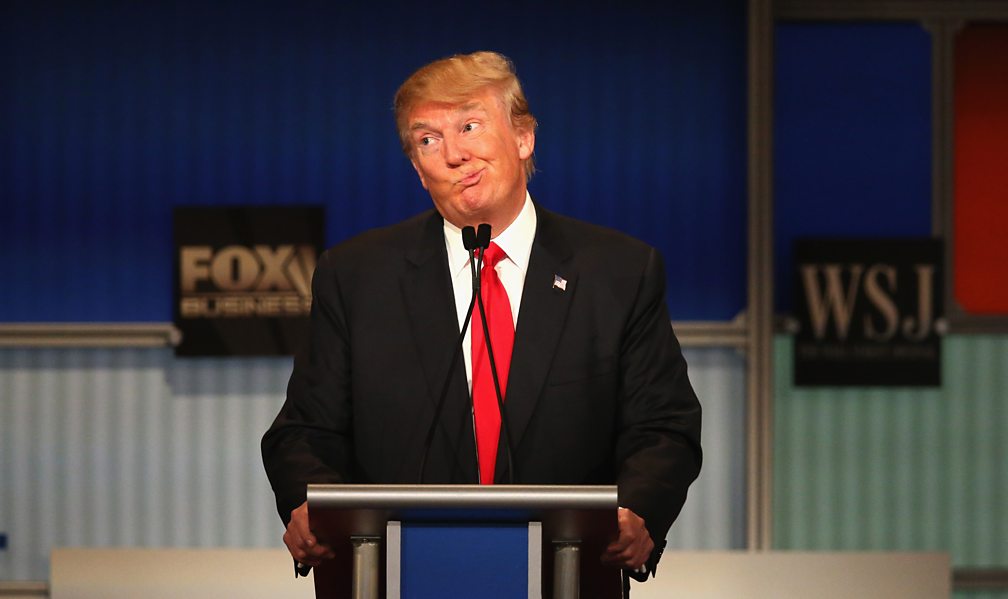 Aside from the occasional unexpected endorsement, like from Azealia Banks (she later withdrew her support), The Donald's been extensively criticised by the great and good of pop, including by Slipknot's Corey Taylor, who accused Trump of "ugly bigotry and hatred", and Ricky Martin, who last year called him "racist, absurd and incoherent". Even our own Johnny Marr got in on the act saying that Donald looks like he has an "omelette on his head". Most recently, The Boss had a pop and anti-Trump indie artists have been releasing a song a day for 30 days in the run up to the 8 November vote.

When it comes to Trump's picks for campaign music, there's been a similar torrent of abuse. Adele wasn't at all happy that the Republican nominee was using her music at rallies and neither were Neil Young or The Rolling Stones. Or House of Pain. Or Brian May and Queen.

On the other hand, a girl group called USA Freedom Kids were initially ecstatic to be offered the opportunity to perform their song, The Official Donald Trump Jam, at a Trump rally in Pensacola, Florida in January. "Cowardice, are you serious? Apologies for freedom - I can’t handle this!" the song begins. "When freedom rings, answer the call!"

The press had a field day, including the Mirror, who called The Official Donald Trump Jam "a jaw-droppingly bizarre North Korea-style propaganda song". It was widely mocked, presumably leading a Trump adviser to have a word about taking USA Freedom Kids out on the campaign trail. Come July, Jeff Popick, manager of the group and father of one of the girls, threatened to file a lawsuit against Team Trump for supposedly breaking an agreement to let them sell CDs at an event, then ditching them in Des Moines, Iowa, although the group had allegedly travelled to the city to perform at a rally.

"He has forsaken the USA Freedom Kids who have brought magic on him," Popick said. 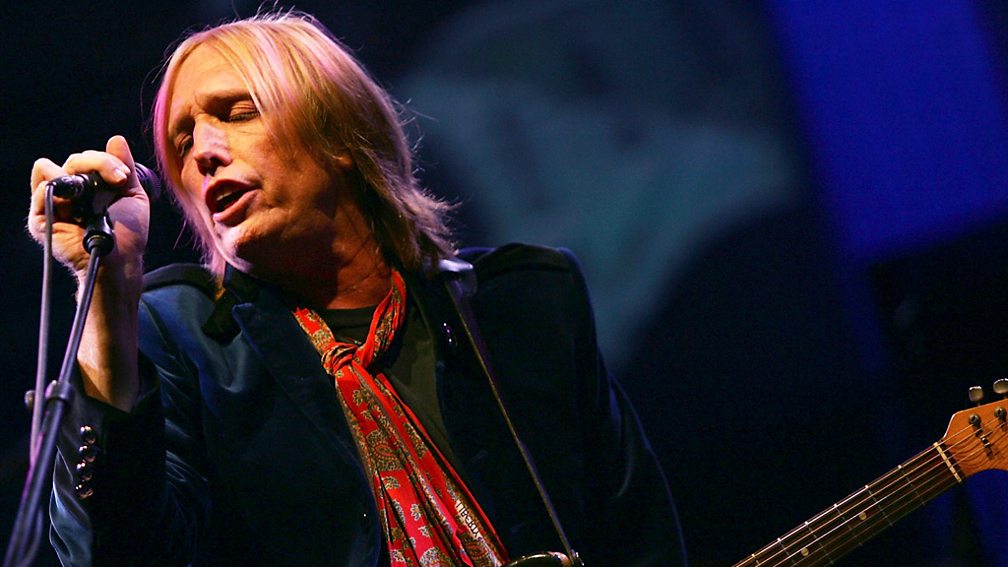 Dubya chose the Tom Petty song I Won't Back Down for his 2000 campaign. Until he received a cease and desist order from Petty's publisher, and immediately backed down.

He made a significant clanger in 2004, too. One of his songs for that campaign was Still the One by Orleans, which begins: "We've been together since way back when / Sometimes I never want to see you again." Whoops.

In the above clip from a 2011 Radio 2 documentary, Suzi Quatro begins a quest to discover the woman behind the myth that is country singer Patsy Cline.

Patsy was best-known for her recording of Willie Nelson's Crazy - an excellent song, but not the kind of ditty you'd imagine a presidential candidate using to promote their suitability to become leader of the free world. Unless they're Ross Perot, the charismatic Texan businessman who ran as an independent in 1992 against Bill Clinton and George Bush.

Crazy is about being hopelessly in love, but Perot chose it because he relished everyone thinking he was nuts. More alarmingly, he seemed to think swathes of America had a screw loose, saying on the day before the election: "There are millions of crazy people in this country. And I'll say tomorrow I bet it'll be a crazy day at the polls."

He predicted he'd win in all 50 states. He didn't win in any, but he did secure a staggering 18.9 per cent of the popular vote. And then he ran again in 1996 - less successfully - as the nominee of the Reform Party, which he'd formed in 1995. 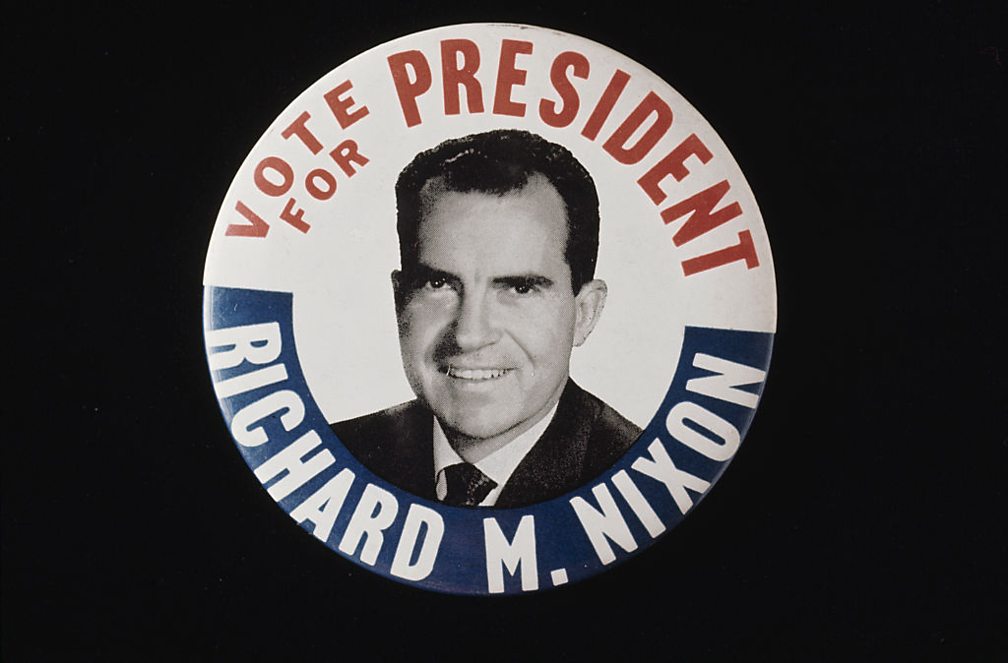 Presidential candidates using an existing popular song for political purposes can be traced back to at least 1932 when Franklin Roosevelt's advisers played Happy Days are Here Again from the 1930 film Chasing Rainbows at the Democratic National Convention.

Nonetheless, specially-commissioned jingles were still popular in 1960, leading to Republican candidate Richard Nixon to inexplicably campaign with a song called Click with Dick. Opening lyrics? "Come on and / Click with Dick / The one that none can lick."

Now, those were more innocent times, but make no mistake - they weren't that innocent.

His opponent, JFK, coolly got Frank Sinatra to re-record his 1959 hit High Hopes with new lyrics - "Oops, there goes the opposition / KERPLOP! K-E-DOUBLE-N-E-D-Y!" - which proved to be as prophetic as the name 'Dick' suggesting Nixon might be a bit of a wrong'un. He was eventually elected twice, but resigned as president in 1974 following the Watergate scandal. 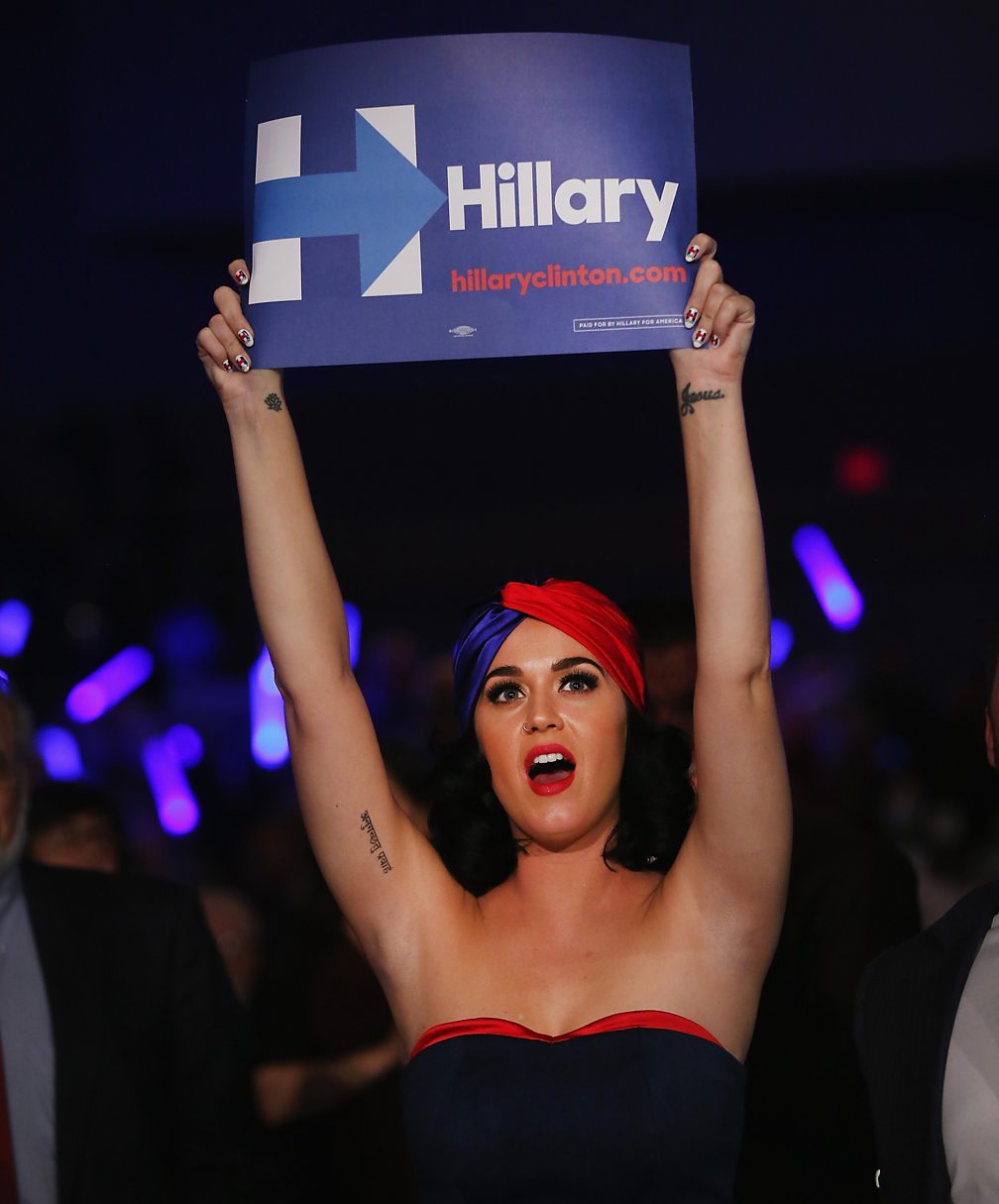 Where to start with Hillary and pop culture? Perhaps with this list from Teen Vogue of 15 Awkward Times Presidential Candidates Used Pop Culture In Their Campaigns, in which the writer says: "We apologise if this list seems like a lot of Hillary, but sometimes it seems like the Democratic hopeful is never not trying to relate to the #youths."

Hillary dabbing on Ellen, "Chillary" Clinton on Snapchat, Hillary trying to make Lena Dunham part of her squad (she eventually succeeded), and that excruciating tweet from her official account - "How does your student loan debt make you feel? Tell us in 3 emojis or less" - all get a mention, but not Hillary's tricky relationship with Katy Perry.

In June 2014, Perry tweeted, "I told @hillaryclinton that I would write her a 'theme' song if she needs it..." to which Hillary, or whoever operates her Twitter account, responded: "Well that's not a Hard Choice. You already did! Keep letting us hear you Roar."

Their political allegiance came into question in February when it was revealed that Perry's company, Kitty Purry Inc., was paid almost $70,000 in December 2015 for "event production". Was Perry being sponsored to endorse Clinton, who was beginning to lose much of the #youth interest to her Democratic rival Bernie Sanders? Camp Clinton say they were only covering expenses - a realistic claim, but a hard one to prove.

Since then, we've seen a lot of Katy and Hillary chumming it up. Most notably, Perry performed Rise and Roar at the Democratic National Convention in July. Interestingly, she started Roar halfway through, conveniently missing the last line of verse one: "I stood for nothing, so I fell for everything." 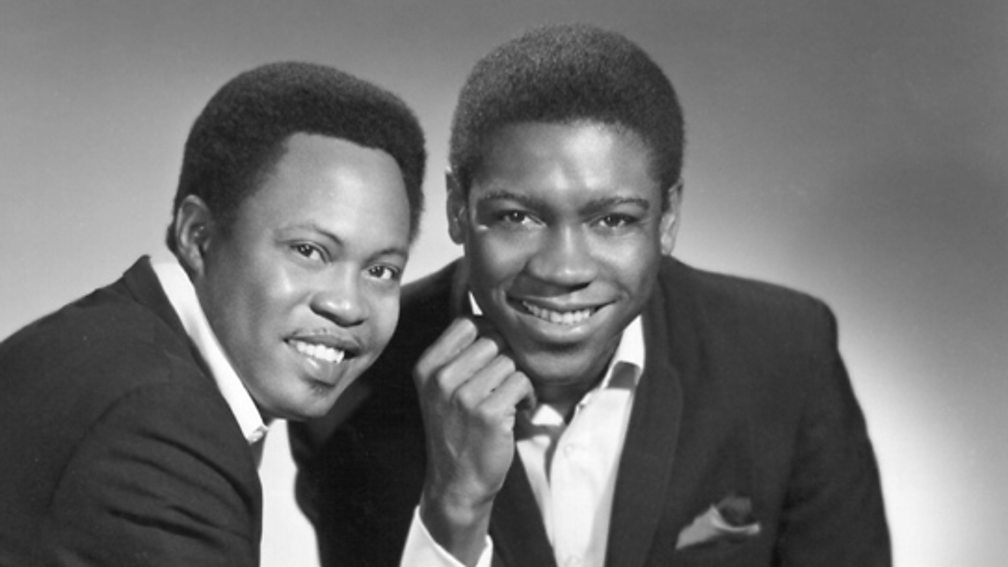 The 1996 election pitched Bill Clinton, the incumbent, against Ross Perot and Senator Bob Dole, a Republican heavyweight thought to be capable of taking out Clinton, who had had a tough four years in the White House.

Going against Dole was his age (he was 73), so his team tried to jazz him up by using a take on the 1966 Sam & Dave (above) classic Soul Man as one of his campaign songs. The new lyrics, written by Sam, were surprisingly feisty: "Insults, I got a truck load / And when you get 'em / Give back some." Also: "And he hates Bill / From Little Rock."

What could possibly go wrong? Commentators were quick to point out the disparity between a song about racial struggle being adapted for a rich conservative, and also that the chorus sounded like, "I'm a dull man!" when chanted by supporters at rallies.

Worse was to come. Sam penned the new lyrics, but he didn't write the original ones, or the music. The song was written by Isaac Hayes and David Porter, who threatened, via their publishing company, to sue for $100,000 for each time the song was played. Dole's team originally claimed - perfectly reasonably - "fair use", because their version was a parody, before backing off.

Amazingly, they then turned to Springsteen's Born in the USA, until The Boss objected. 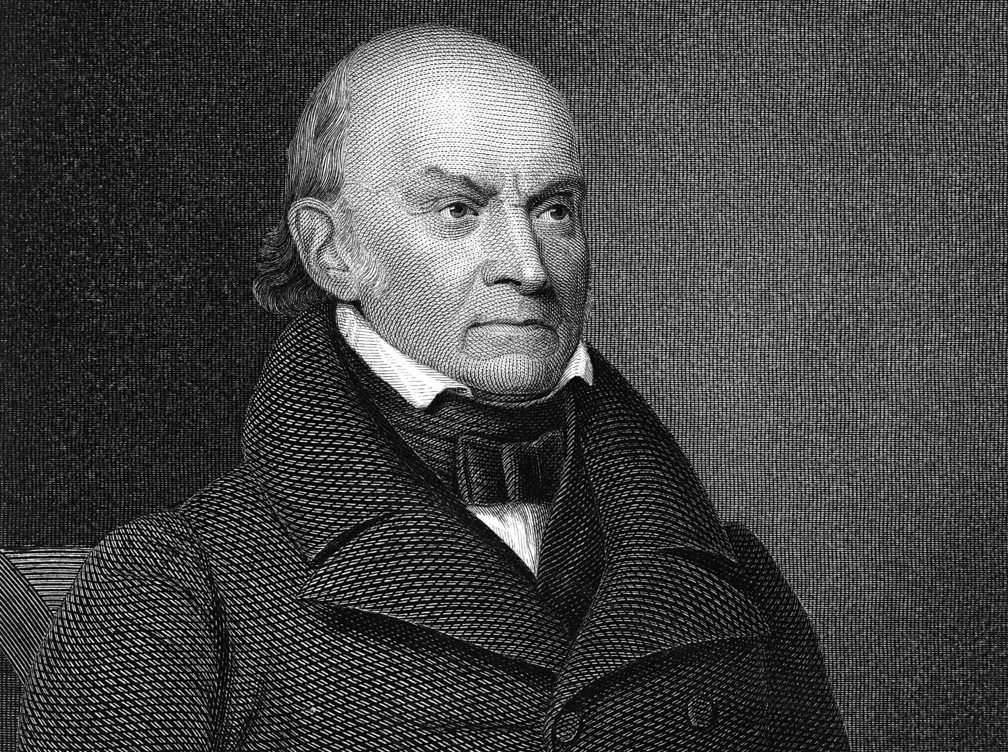 You might think of fear-mongering and negative campaigning as modern phenomena symptomatic of a slide in the quality of presidential candidates, but things were far worse in the 19th century, judging by John Quincy Adams's campaign song in the 1828 election.

Adams, a Republican, had beaten Democrat Andrew Jackson in an extraordinarily close race in 1824 and, as incumbent, he was at an advantage when he faced Jackson again four years later. Jackson, though, fought a strong campaign, forcing Adams to go on the attack with an bewilderingly vicious song, Little Know Ye Who's Coming, which predicted that America would be beset by the following horrors if he lost the race: fire, swords, knives, guns, famine, slavery, plundering, robbing, fear, plague, pestilence, Satanism.

The American public weren't impressed and elected Jackson by a landslide.