8 of the strangest hometown tributes to musicians

Civic pride is a wonderful thing, especially for those stars who first picked up a microphone or a musical instrument in order to stand out among the people in their immediate community.

That said, when that community chooses to honour their celebrity son or daughter, things can get a little lost in translation along the way. This isn't necessarily a bad thing; in fact, some of the examples of civic tribute below are really touching. But it must be a little odd to think about your hometown and discover exactly where they've chosen to put your name or likeness.

The citizens of Duluth, Minnesota, are rightly proud that Bob Dylan was born in their community and raised in nearby Hibbing. They have shown this by creating a 1.8-mile themed road and tourist attraction called Bob Dylan Way - which was originally part of Highway 61.

One of the features of this road is that the manhole covers are being taken out, one by one, and replaced with specially designed artistic representations of the great man and his works, made from recycled radiators. It's not a star on the Hollywood Walk of Fame, but that's part of its charm.

In the case of Frank Sidebottom, it's less that the form of the tribute from his beloved Timperley is unexpected - it's a statue, faithfully recreating his famous features, complete with fully coloured-in head - it's that it's unexpected that there would be a tribute of such size and permanence at all.

Frank's career as an entertainer was not the stuff of stadium-filling success, although as a performer he always acted as if it was - filtered through the lens of his local community - and that's probably part of the point. The statue is a hallmark of the affection he had for Timperley, and Timperley had for him.

Dave Grohl's memories of his birthplace in Warren, Ohio may be somewhat hazy, as he moved to Virginia when he was a child, but Warren has not forgotten him. Already honoured with a street - Dave Grohl Alley - the principal Foo Fighter is also the inspiration for the city's claim to have created the world's biggest set of drumsticks.

The sticks, weighing an impressive 900 pounds, are embossed with a similar feather motif to the one that Dave has tattooed onto his forearms and they take pride of place in Dave Grohl Alley. When they were first revealed in 2012, Dave tweeted a message of thanks: "To the wonderful city of Warren, from the bottom of my heart I'd like to thank you all so much... For the childhood memories. For my family. For my very own alley. For the world's largest drumsticks! And for all of your support... But most of all for being such a great community. One that makes me proud to say... I am from Warren, Ohio!"

The 2 Tone taxi started as a BBC Coventry & Warwickshire initiative last year, as a way of celebrating both the musical and industrial heritage of the city. 2 Tone Records, home of The Specials, The Selecter, The Beat and Madness, and hub of the late-70s ska revival, was started in Coventry by Jerry Dammers in 1979, and Coventry was also the place where The London Taxi Company built its famous black cabs.

Those two ideas were then put together, and local artists collaborated on the decoration of a black cab, which was then put into service offering rides around the city and pointing out hidden gems in Coventry's civic history that visitors may otherwise have missed. After a trial run in 2017, the 2 Tone taxi was reintroduced in summer 2018, and as this clip demonstrates, it is anything but monochrome.

Memphis is not short of big Elvis Presley monuments. There's Graceland - his former home, and museum to his life and work. There's Sun Studios, where he cut the first songs that would make him rock 'n' roll's first superstar, and there's a Heartbreak Hotel, set on Lonely Street, because of course there is.

However, possibly the greatest Elvis shrine in Memphis is at Goner Records. It's a literal shrine, draped in beads and glitter and dolls, with a single blue suede shoe for thematic correctness, and it's fully interactive, in that you put a coin in the slot and the 'Elvis' moves. Many's the fan who has come away from the experience claiming to be (ahem) "all shook up". 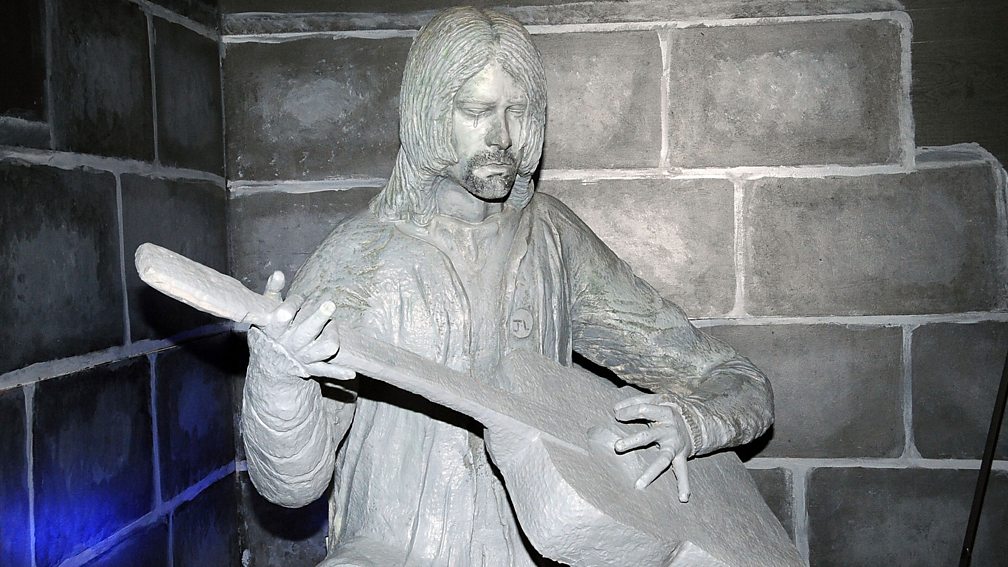 Aberdeen, Washington has seized upon the fact that Kurt Cobain was born and raised there with both hands. There's a sign on the way into town that reads "Welcome to Aberdeen: Come As You Are" and a commemorative plaque on a bridge, simply because it is mentioned in the Nirvana song Something in the Way.

Aberdeen Museum of History also, until recently, could boast a display featuring a sofa that Kurt would sometimes sleep on when staying at a friend's house. But perhaps the most startling addition to their Nirvana collection is the cement statue of Kurt created by artist Randi Hubbard. She started it in the immediate aftermath of Cobain's death in 1994, getting help from local art students to finish it off. Fans have noted a marked resemblance to Jesus Christ, and queried the single tear coming from Kurt's right eye. And due to Kurt's often sour view of his home town, Aberdeen's civic authorities were slow to offer a home for it, and it sat in Randi's workshop for nearly 20 years, before finally moving to the museum in 2012.

In June of this year, parts of the museum were seriously damaged in a fire. It's unclear how much of the Cobain collection has been lost.

Twitter: Erik Sandvick The original Graffiti Bridge in Eden Prairie in the '80's.

Sadly, this one no longer exists, but Minneapolis did at one time boast a tribute to Prince that was entirely reciprocated. In the suburb of Eden Prairie, a Minneapolis & Saint Louis Railway bridge found itself the topic of local legend when anti-war protesters began painting graffiti slogans on it in the 1960s. Over time, those slogans were painted over, soon to be replaced with others, and the crossing became known as Graffiti Bridge. After hip hop culture increased the popularity of street art in the 1980s, the walls were being whitewashed as often as once a week.

Then, in 1990, Prince released the film Graffiti Bridge as his official follow-up to Purple Rain. And as you can see from the photo above, his tribute was immediately reflected back at him, from the bridge itself. It wasn't to last, though - Graffiti Bridge was torn down a year later in order to widen the road. 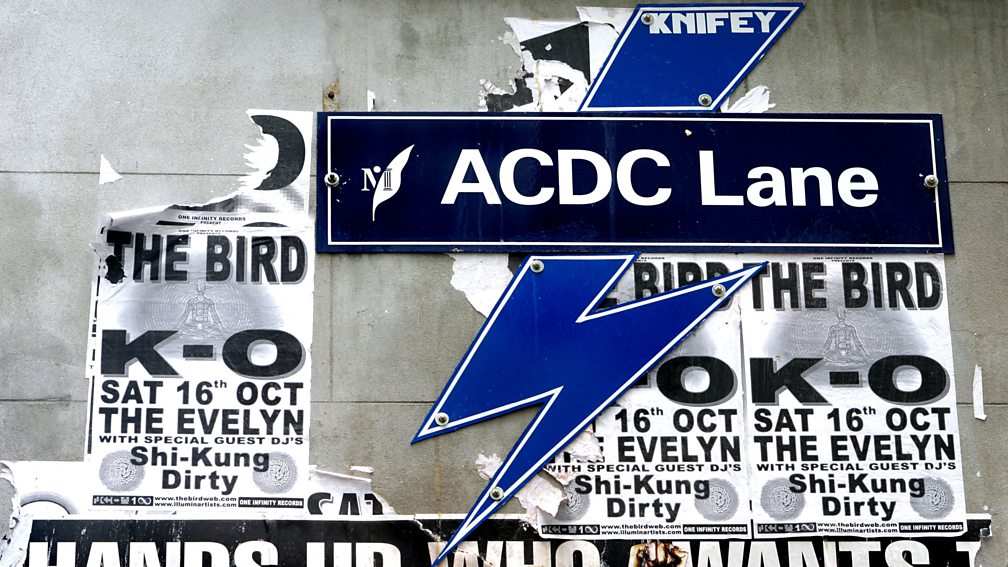 It's not uncommon for musicians to be honoured with their own street name, and AC/DC are certainly deserving of such an accolade. Melbourne City Council changed the name of Corporation Lane to ACDC Lane in 2004, to honour the band who put Australian rock on the map. But there was a problem.

According to local policy, the lightning bolt or backslash ("/") that separates AC and DC in the band's name is not a permissible character in street names, so in the signs at least, the band's name was cut short, to ACDC. One month after the unveiling of the new street signs, a local artist called Knifeyard put up a suitably rocking blue bolt that bisects the sign, restoring AC/DC's trademark. It has, sadly, since been removed.