8 of the most awkward music interviews on chat shows

When it comes to TV appearances, it's part of a pop star's job to leave a mark in the mind. They can do it using charm and verbal dexterity, or they can do it using enigmatic silences and angry death stares, but as long as everyone remembers them, they've done their job properly.

So, arguably all of the people in this list of uncomfortable TV encounters can congratulate themselves on a job well done, even if that involves running around a live TV studio shouting, or getting into a row with the presenter...

Let's get the most iconic bad interview in music history out of the way first. The Sex Pistols were only booked on the Today show because Queen pulled out. Their interviewer, Bill Grundy, had no reason to like the spiky urchins that had been ushered in as Freddie Mercury's replacements, but he didn't need to try and call them out on their lack of classical training, nor goad them into further swearing after John Lydon accidentally dropped a half-whispered S-bomb. It's hard to work out what he was trying to achieve, but the band do as they are told, very willingly.

For an ephemeral TV moment broadcast in the era before video recorders - let alone YouTube - this interview has cast a long shadow, and not just over the people on screen. There have been animated parodies and Lego re-enactments, and it has even been painstakingly recreated, shot-by-shot, in a skit by comedian Kevin Eldon in which the band appear dressed in Amish clothing. And it never gets any less queasy to watch.

Richard Ashcroft is, it is fair to say, a somewhat over-energetic conversationalist. Even when appearing on the BBC Breakfast sofa, he merely requires the smallest "good morning" to launch into a monologue of welcome, wandering into a conversation about rock 'n' roll as a religion - and therefore his shades being sacred - and then walking to the pretend window behind presenters Charlie Stayt and Naga Munchetty and claiming, "IT IS THE TRUMAN SHOW!" as a way of introducing the idea that his new album is called Natural Rebel.

Credit where it is due, "I've never had a bad review off a good-looking person," is a very good line, particularly for that time of the morning.

The Bee Gees vs Clive Anderson 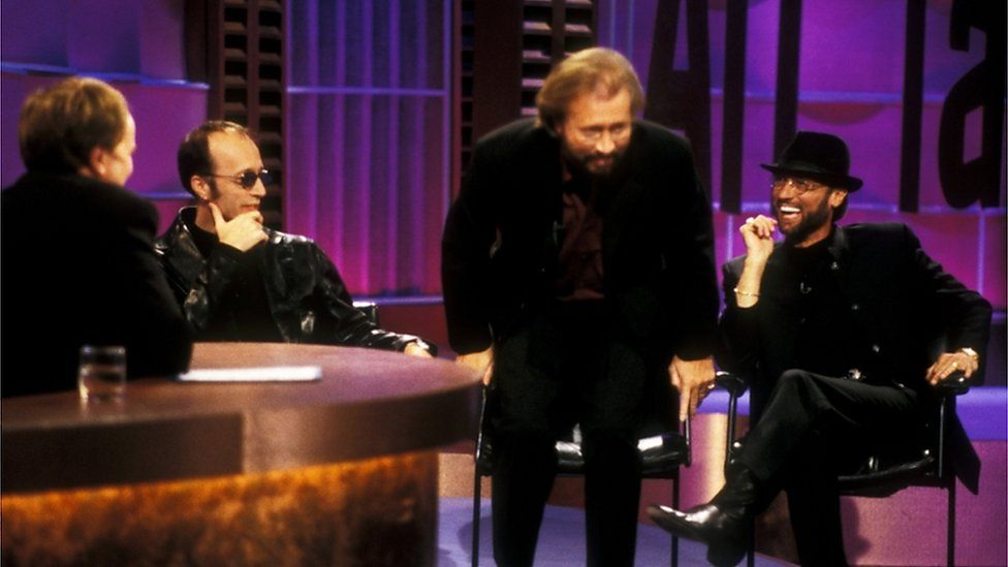 As anyone raised on Simon Amstell's hosting years on Never Mind the Buzzcocks can readily attest, there are pop stars who can handle a bit of banter with a comedian, and there are pop stars who can not. To be fair to the Bee Gees, they had to put up with a decade of snarky digs at their image by the time they agreed to appear on Clive Anderson's BBC chat show in 1997. Knowing Anderson to be a bit sharp, they'd turned down several requests to appear, only to be told that the host is a huge fan of the band.

Whether he was or is remains unclear, but the fan worship didn't give them any special status. An early remark about them being hit writers - "we're one letter short" - got Barry and Robin Gibb's backs up, so when Clive found out they had once considered calling themselves Les Tossers, and made the obvious gag that they still were, the brothers walked off in a fury, leaving a slightly nonplussed Maurice behind. Barry later told MOJO: "People think it was the last thing he said - the remark about tossers - that made us walk off. It wasn't. It was the very first thing. We gave him a few more minutes out of professionalism."

The second most famous awkward interview in TV history concerns Grace Jones, a live wire of similar voltage to Richard Ashcroft, and absolutely not someone you should consider turning your back on. In 1980, in an attempt to ask his other guest whether he was wearing perfume - for reasons that made sense at the time - interviewer Russell Harty shifted his attention away from Grace, and received a barrage of outrage and a couple of stiff whacks on the shoulder for good measure.

In her autobiography, Ms Jones later explained that she was feeling unwell, with infected sinuses, adding: "I was meant to sit next to Russell Harty and keep still and quiet. I was all dressed up like an Amazonian seductress, and treated like the hired help. I thought, This is no way to treat a guest. This wasn't at all like what we'd rehearsed. Being stuck there while he ignored me made me feel very uncomfortable... I wasn't attacking him because I was drunk or stoned. I was lashing out because I felt he was not being proper."

In the public's mind, the two never quite got over the encounter, and Grace noted: "When he died, my phone never stopped. It rang off the hook. What do you think about Russell Harty dying? Well, I am very sorry, but what do you want me to say? I didn't know him at all. I didn't kill him. I had nothing to do with it. I wasn't there at all. I had an alibi." 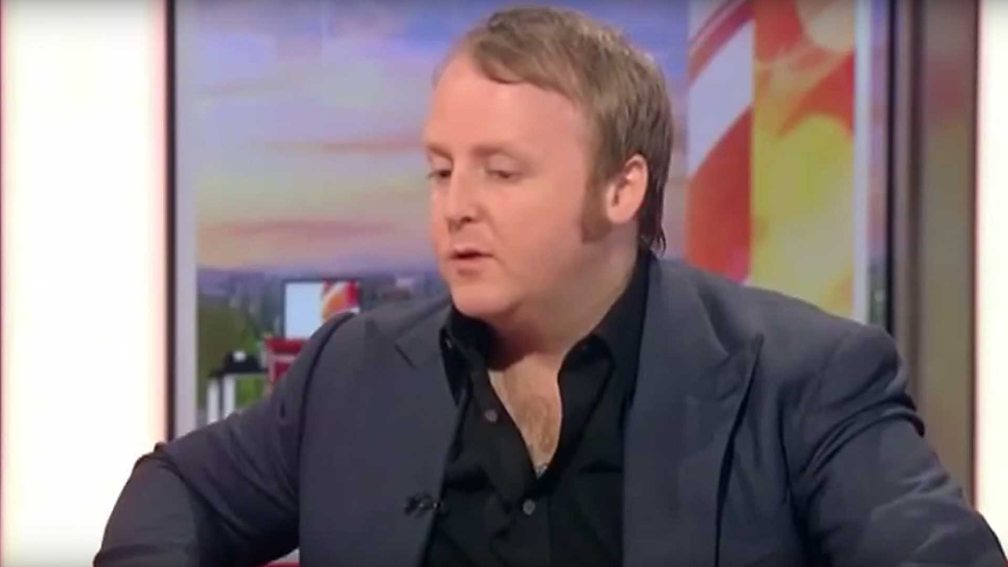 James McCartney has the face of his father. What he doesn't appear to have inherited (yet) is Paul's easy charm in front of TV cameras, and that's okay - hardly anyone is that charming, and no one really needs to be. Unless they happen to be appearing on BBC Breakfast to promote their debut album. Then the discomfort is catching.

After a song, James sits on the sofa and seems to take up a very stone-faced and withdrawn attitude - the anti-Ashcroft - answering questions about the preparation of his album in an unexcited monotone with answers that do not sell the magic of its creation: "Maybe a couple of years," he muses, "going into different studios, y'know, spending time writing the lyrics... and, y'know, writing the music."

Bill Turnbull notes that one of the guest musicians is called Paul McCartney, and jokes, "Who's he?" and James replies, "Oh, he's my father," and it's a toss-up whether he's deadpanning a joke or not (he probably is). And when asked if he feels it's necessary to play lots of different instruments, he replies: "Is it? Not really. But for me it is… No, I don't know." It's enough to make your cornflakes wilt.

Morrissey vs The One Show

According to popular legend (and some first-hand accounts by people who seem to know what they're talking about) it is very easy to get on Morrissey's bad side. So if you're Adrian Chiles, presenter of The One Show, and you happen to know Morrissey's mum enjoys your work, the thing not to do is get her name wrong - twice - at the beginning of your interview.

And it's not as if things get much better from then on. An attempt to garner sympathy from Moz to white-collar workers facing unemployment for the first time falls on stony ground. Adrian points out they won't have experienced anything but success, Moz counters with a barb: "Therefore, why sympathise with them?"

But the most curious thing watching it all back on YouTube is the realisation that the awkwardness and tension comes less from Morrissey - who seems perfectly calm throughout - but from his interviewers, who seem overawed by his cult of cool.

It's always tricky when people who are more famous for a thing they no longer do are booked to appear on a TV show to talk about something they're doing now. Do you ask about the past and appear rude, or talk about the present and look as if you've forgotten why everyone likes that person in the first place?

Former Wham! star Andrew Ridgeley appeared on Good Morning Britain in June to talk about taking part in Lawrence Dallaglio's Cycle Slam, a punishing bike ride across Europe, raising money for charity. He was not there to talk about his pop past, particularly the death of George Michael. So when Piers Morgan asked him about it, he said: "The loss of a great friend is traumatic, and emotionally tough - almost as emotionally tough as the Dallaglio Cycle Slam," which then prompted the somewhat frosty exchange above.

After the interview, Andrew took to Instagram, pointedly leaving out any mention of either tension in the studio or the person leading the inquisition, and saying, "I am grateful to #goodmorningbritain for inviting me on today’s show to discuss the recent #dallagliocycleslam fundraising event & it was a pleasure to speak with the charming Susannah Reid and Kate Garraway."

Piers took the less refined route, tweeting: "Many thanks to Andrew Ridgeley for being such an insufferable d*** today - much appreciated!"

Sometimes the interview gets the upper hand, however. Let's look at this cautionary tale, in which Diddy - hip hop mogul, and man who really has to appear to be fearless in the face of all provocation - explains to Ellen Degeneres that he is not afraid of clowns. Ellen seems to think that he is, but he's adamant that this is not the case.

"Oh no," you may be thinking, "she must be feeling pretty embarrassed right now. Her fact-checkers are in for a right telling-off when she gets back to the office later."