5 pop stars who built a pub in their home

In the introduction to a 2012 Quietus interview with Iron Maiden's Steve Harris, journalist John Doran wrote: "He comes from a different age when rock stars simply wished to achieve what their dads dreamed of - escape from the city to a nice satellite town, upmarket fishing, great seats at the football, a lot of travel and perhaps even one's own pub inside the house for all their mates to drink in."

Harris achieved all of those things, including the in-home pub, and he's not alone. As we'll find out, building a local that's very local indeed remains an ambition for many of today's pop stars, too. It's an emblem of success, and perhaps also a consequence - offering those who can't go to the pub without being bothered the chance to recreate the experience in private. 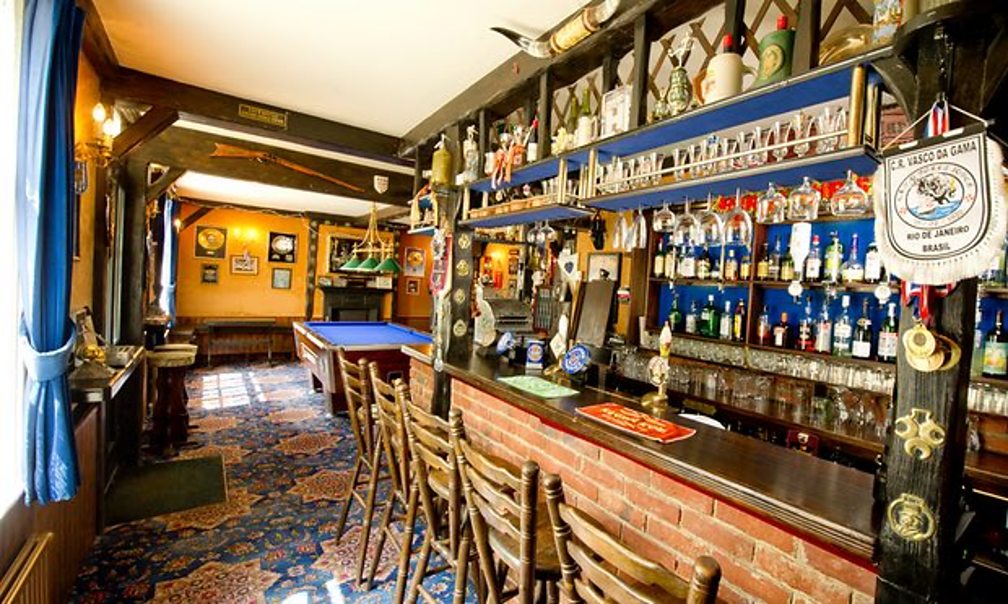 Steve Harris isn't just Iron Maiden's bass player, he's the heavy metal group's primary songwriter and that means receiving very substantial royalty cheques for almost 40-years-worth of hit records. When he first put his 11-bedroom mansion in Sheering, Essex on the market in 2013, he was asking for £6.75 million, as NME reported. You could understand why - parts of the listed building date back to 1427, and the property came with a gorgeous indoor swimming pool and gym, nine acres of land, a tennis court, full-sized football pitch (Steve's an avid footballer and West Ham fan) as well as its own pub, thought to be called The Horse And Cart, above.

His property, which he'd owned since the 1980s, didn't sell, forcing Steve to keep slashing the price, reportedly down to under £4 million. He now divides his time between homes in Los Angeles and Barbados.

If I have a party, everyone goes in the pub and no one can get in the house, so you get no one raiding the cupboards

Judging by the time in 2014 he had an impromptu bar-side singalong at The Surrey Cricketers in Windlesham, as reported by Get Surrey, Ed Sheeran feels comfortable in the pub. Or he certainly used to. His fame is now such that he recently revealed to the Guardian that he suffered a panic attack on a flight from Spain to London, while he was on his own with "no friends, no security, at two in the morning, on easyJet, with all the p***** Benidorm lot". He added: "I just don't like groups of people that I don't know any more... I can go to a pub, but only if it's a pub that no one would go to."

This perhaps explains why Ed has built an subterranean pub in his home. He told Apple Music's Zane Lowe about it in January, as reported by NME: "I had a bar before, a bar where you could pour beers but now this has a selection of beers, which is cool. There's an underground tunnel to get there that you can close off. If I have a party, everyone goes in the pub and no one can get in the house, so you get no one raiding the cupboards or smashing anything. You have to go underground to get to the pub."

If I have a party, everyone goes in the pub and no one can get in the house, so you get no one raiding the cupboards

I bought the bits from Homebase. I put it all together. I decided to turn it into a pub

Former One Direction superstar Zayn Malik, who grew up in Bradford, has pubs in his blood. His grandparents ran one, The Bradford Arms, and the pub he built in the back garden of his outer-London home is something of a tribute to them. NME visited him there in 2016, reporting: "There are a couple of taps, a collection of spooky skulls, some fake cobwebs probably left over from Halloween and a novelty beer helmet with funnels on it. There's a One Direction platinum disc on the far wall and, above the door, a small plaque giving the names of Zayn's maternal grandparents."

"I bought the bits from Homebase," Zayn said. "I put it all together. I decided to turn it into a pub. I like f****** around with the nail gun."

Has his ex-bandmate Harry Styles built one too, in his London home? In 2015, The Mirror reported that he had, but they only quoted unnamed sources.

I bought the bits from Homebase. I put it all together. I decided to turn it into a pub

Brian Johnson's career took a dramatic left turn in 1980 when he left glam rock band Geordie to become the singer of AC/DC, following the death of original frontman Bon Scott. The first album Johnson recorded with the Aussie rockers, Back in Black, was a monster hit and is now thought to have sold 50 million copies, making it the second-best selling album of all time.

Johnson moved to Sarasota, Florida many years ago, but he still lived in his native North East England after finding fame and fortune with AC/DC. And, yup, he built a pub in his home, complete with a pool table and dartboard. Footage from a 1983 documentary on YouTube finds Brian telling an interviewer, who visited him at home: "This is my recreation room - you're wrecked when you walk out of it!" He mentions that if you do go out and you're driving, you can't drink, hence, "It's handier to just crawl out of her and up to bed, you see."

I love English beer, especially Steamin' Billy bitter that I have here

"I can hit notes a bank could not cash," Engelbert Humperdinck once said, leading him to earn plenty of notes the bank certainly could cash. The Hump, born plain old Arnold Dorsey in 1936, has been smart with his loot over a long career, investing in property across the world and maintaining homes in Los Angeles and Leicestershire, where he spent his youth.

He bought his nine-bedroom Leicestershire mansion in 1978 and it couldn't be more British - there's a red phone box in the garden, a Rolls Royce on the driveway and a pub, The Red Fox, on the property. He gave the Mirror a tour in 2012, the year he represented United Kingdom in the Eurovision Song Contest, telling their reporter: "The pub was made almost immediately. This is where the maids used to be in the days of gentry and they would clean the brass and the silver. It has been a great place for parties and for families and friends to come over."

He has a dartboard in the pub, given to him by former pro Bobby George, and the local bitter on tap. "I love English beer, especially Steamin' Billy bitter that I have here. But I have been off it lately. I had a taste today but I won't have a few pints until after Eurovision. For the moment I can only have red wine."

The Hump finished in 25th place at the 2012 Eurovision, with a score of just 12 points.

I love English beer, especially Steamin' Billy bitter that I have here