The world of music is full of intrigue, as we've discovered before - whether it's mysteries in album covers, strange cases of 'lost' music suddenly being discovered, or the creepy myths about pop stars that become legend. Conspiracy theories about song lyrics abound too, but how many of us feel the need to solves music's puzzles? More and more, it seems, especially in our age of mass information.

These five stories all started with someone saying, "I wonder what..." then using whatever they could to get to the bottom of a mystery that bugged them, sometimes alone, and sometimes by harnessing the awesome power of the internet's hive mind.

What was the date of Ice Cube's "good day"?

The mystery: At some point before or during the recording of his third album The Predator in 1991-1992, gangsta rapper Ice Cube had a good day and he wrote a song about it, It Was a Good Day. He begins, "Just waking up in the morning, gotta thank God / I don't know, but today seems kinda odd / No barking from the dog, no smog," before detailing a number of activities and events - getting beeped on his pager by future wife Kim; visiting Shorty of Da Lench Mob, who was watching Yo! MTV Raps; the Lakers beating the SuperSonics; having a burger at 2am - that some bloggers thought revealed enough for them to pinpoint the exact day he was describing.

The sleuthing: First out of the traps was a stand-up comedian called Donovan Strain, who published a convincing Tumblr post in 2012 declaring, "The only day where: Yo! MTV Raps was on air, it was a clear and smogless day in Los Angeles, beepers or pagers were commercially sold, Lakers beat the SuperSonics, and Ice Cube had no filming commitments was January 20, 1992." His post went viral, Cube responded with, "Nice try," then other online sleuths quickly picked apart his reasoning. The best response came from Pandemonium on Tumblr who suggested 30 November, 1988. But he couldn't be absolutely sure.

Solved? Pandemonium concluded: "The song's not a true story and there never was any single 'perfect day' as described." As frustrating as that is, it may well be the truth.

Who is the Grateful Doe? 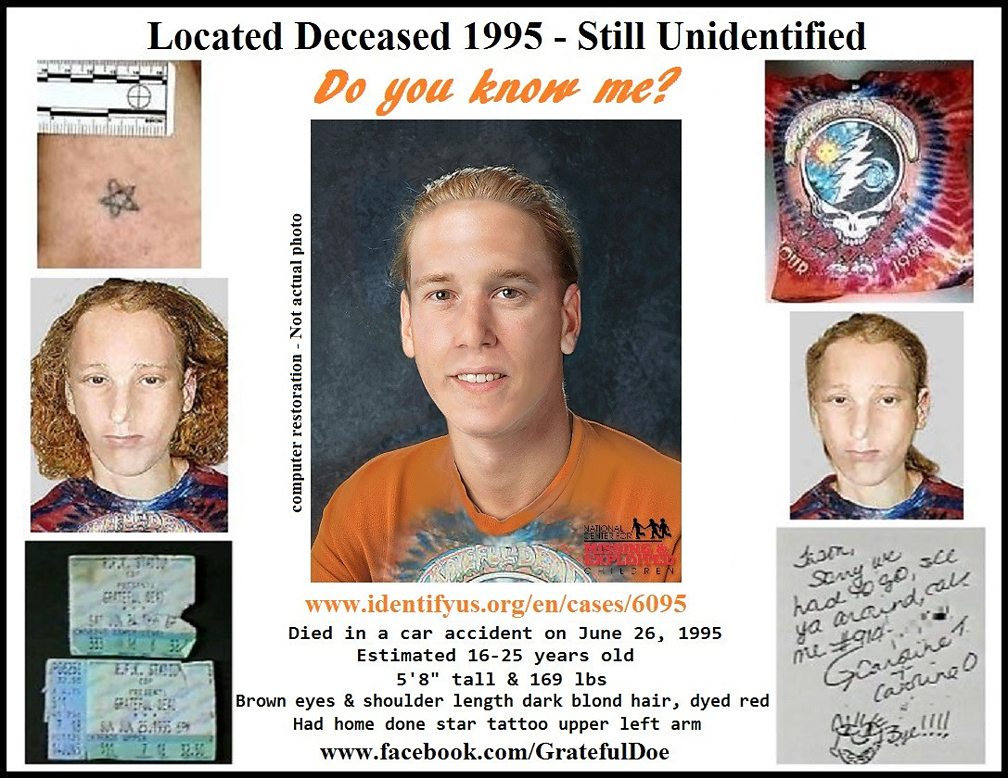 The mystery: A car crash in the state of Virginia on June 26, 1995 resulted in the deaths of two fans of American jam band the Grateful Dead. The driver of the car, Michael Hager, was identified, but not his passenger, thought to be a hitchhiker. He was estimated to be aged between 15 and 21 and on him he had two recently used tickets for Grateful Dead concerts, a lighter and some spare change. A note was also found, which read: "To Jason, Sorry we had to go, see you around, call me #914-[XXXX]. Caroline T. and Caroline O. Bye!!!!" Without an area code, the number proved to be worthless and the two Carolines were never identified. Both men tested negative to having any intoxicants in their blood. Jason's fingerprints failed to match those of anyone on registers for missing people and his facial injuries were such that mortuary photographs were not released to the public. He was declared a John Doe and nicknamed Grateful Doe.

The sleuthing: Many years later, the case was adopted by users of Reddit, Facebook and Websleuths, a site dedicated to unsolved mysteries. A facial reconstruction image created in 2012 was widely shared, leading to a breakthrough in 2015 - a man came forward suggesting the Grateful Doe was a former roommate of his, although he didn't remember his surname, and he provided photos. Soon after, a woman in South Carolina purporting to be Jason's mother contacted a Facebook page dedicated to the case and filed a police report. She said she hadn't done so previously because Jason - proved by DNA analysis to indeed be her son, Jason Callahan - often ran away and she didn't know in which state to report him missing. He was 19 and heading south when he died, not to the next Grateful Dead concert in Michigan.

Where's the bridge in the Red Hot Chili Peppers song?

The mystery: While producing Red Hot Chili Peppers' 1991 album Blood Sugar Sex Magik, Rick Rubin read a poem in Anthony Kiedis's notebook and persuaded the singer to use it as the lyrics for a song. The song, the band's breakthrough hit Under the Bridge, concerns Kiedis's addiction to hard drugs (three-to-five years before the song was written), which he used to take "under the bridge downtown". But which bridge? When asked in 1992 by Rolling Stone magazine, Kiedis refused to say, although he did mention it was in LA.

The sleuthing: Scenes in the video to the song, above, are shot at the Belmont Tunnel about a mile from downtown LA, suggesting that could be the bridge Kiedis was referring to, and it was certainly a run-down area in the late-80s. Many fans believed that to be the case until, in 2012, writer Mark Haskell Smith posted his research on Vulture, referring to Kiedis's memoir and other sources. He concluded that the bridge was in MacArthur Park - the same park that Jimmy Webb wrote a song about in 1968, after which it went into severe decline. Commentators under the pieces were suspicious of his reasoning, and mentioned countless other bridges. Then, in 2014, LA Weekly writer Jennifer Swann took the sleuthing into the realms of hardcore investigative journalism with an extraordinary four-part story with sources ranging from experts on gang culture and the Mexican Mafia to local university professors. Swann's thoughts? It's the 10 freeway bridge that crosses over Hoover Street.

Solved? No. Despite Swann's exhaustive research, she concludes: "We'll probably never know for certain, because the one person who knows the bridge's location [Kiedis] isn't talking."

What's the opening chord of A Hard Day's Night?

The mystery: In 2017, it's hard to imagine quite how strange the clanging chord that opens The Beatles' title song for their film A Hard Day's Night would have sounded in 1964. "We knew it would open both the film and the soundtrack LP, so we wanted a particularly strong and effective beginning," producer George Martin once said. "The strident guitar chord was the perfect launch." But what is it?

The sleuthing: The chord is played by George Harrison on a Rickenbacker 12-string guitar. In 2001, he said: "It is F with a G on top, but you'll have to ask Paul about the bass note to get the proper story." Cue much debate among amateur musicians and musicologists, one of whom, Dominic Pedler, suggested that all of The Beatles, as well as George Martin, are contributing to the sound we hear. Then, in 2008, guitar player and mathematician published an analysis, reported by Science Daily, in which he claimed to have "cracked" the code of the chord using Fourier transforms. His findings were complex, and subsequently partially challenged by another mathematician, Kevin Houston from the University of Leeds, who placed more emphasis on Lennon's contribution to the chord on an acoustic guitar.

Solved? It's F with a G on top, plus other bits played by the band and their producer. And that's probably as good as anyone will ever be able to say.

Who wrote an 80s new wave song named Stay (The Second Time Around)? 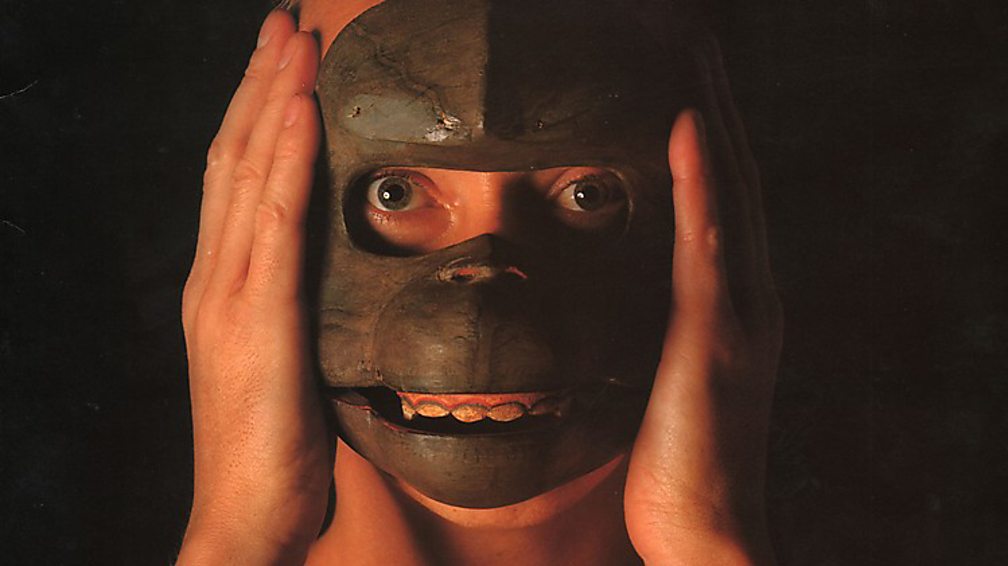 Johan Lindell, pictured on the cover for his 1985 album Ghost Rider

The mystery: Way back in 2004, a short snippet of a new wave song recorded off a German radio station in the mid-80s by a music fan called René began circulating online, with no one managing to recognise or name the track. It was posted on YouTube in 2007 with the title Stay (The Second Time Around) by an American, Dan Coogan, with a simple request: "Please help us identify the mystery song."

The sleuthing: Trying to work out what the song was became an online preoccupation for users of many sites. With no immediate breakthrough, it was thought that perhaps the track was a hoax or part of a viral marketing campaign. It took until 2013 for a Reddit user called Turtle-in-Trenchcoat to eventually post a solution - the song was actually called On the Roof from a 1985 album, Ghost Rider, by Swedish musician Johan Lindell. Amazingly, Lindell had the full song available to hear on his site for the entire time the mystery was being investigated. He was interviewed on Sveriges Radio. "I never visit the internet," he said, hence he knew nothing of the interest in his song, which was created with members of Roxette. He'd given up recording music 12 years previously, and subsequently become an actor and painter.