Breakfast Time, British television's first national breakfast programme, was given unique access to Queen in July 1985 as they prepared for Live Aid. In the clip, presenter Penny Bustin also asks the band how they became involved in the iconic concert at Wembley and how they were going about selecting a set list.

Bob Marley & The Wailers perform Get Up Stand Up at the Rainbow Theatre, London in June 1977. The final dates of the Exodus Tour in London were cancelled after Marley hurt his toe in a football friendly match. This injury led to the discovery of a malignant melanoma, which caused his death on 11 May 1981.

Time to indulge in a longer clip. Here, over 30 minutes, Bob Harris interviews the former Beatle in his adopted home of New York for The Old Grey Whistle Test. They cover Lennon's life in the US, his visa issues, the changing music scene, working with David Bowie and Elton John, repairing his friendship with Paul McCartney, and his new album, Rock 'n' Roll.

Yes, you read that right. In this fabulously hammy clip from Plácido Domingo's Christmas Choice, originally broadcast on 24 December 1980, the Spanish tenor takes to the golf course with soprano Dame Kiri Te Kanawa and enjoys a kickabout with Liverpool and England ace Kevin Keegan.

After a blistering performance of Voodoo Child on the Happening For Lulu show in January 1969, The Jimi Hendrix Experience stop midway through a half-hearted attempt at their first hit Hey Joe. The trio break into Cream's Sunshine of Your Love, in tribute to the recently disbanded group, until producers bring the song to a premature end.

According to the memoir of bassist Noel Redding, Lulu had been due to join Hendrix on stage to sing the final lines of Hey Joe, but the band wasn't too keen on the idea. The stunt (according to rock 'n' roll legend) earned The Jimi Hendrix Experience a ban from performing on BBC television. Hendrix died the following year on 18 September 1970.

The former Simon & Garfunkel singer discusses the controversy surrounding the smash-hit album he recorded with South African musicians under apartheid on the BBC's Breakfast Time in August 1986. "inadvertently, I've become a crusader," he says.

A classic performance from Salford post-punk band Joy Division on the Something Else programme, originally broadcast on 15 September 1979. Frontman Ian Curtis died just eight months later, on 18 May 1980.

9. Allen Toussaint: 'One of the greatest songwriters of all time', 2006

Allen Toussaint was a prolific soul and R&B musician and songwriter who died suddenly on 10 November 2015 ahead of a planned appearance at the EFG London Jazz Festival. In this 2006 episode of Imagine, the man himself reminisces about writing one of his best known songs, It’s Raining and we also hear from fans Jools Holland and Elvis Costello who talk about his exceptional talent. 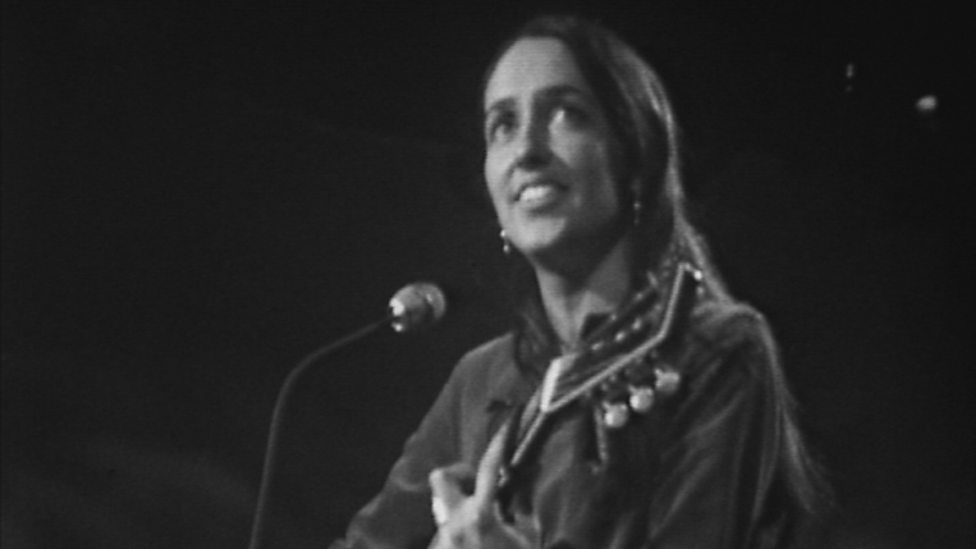 This performance of Bob Dylan's It Ain't Me Babe is taken from a concert which was specially filmed by the BBC in 1965 during a visit to the UK by Joan Baez. It took place shortly after the turbulent period in her life (chronicled in D.A. Pennebaker’s film Don’t Look Back) in which her relationship with Bob Dylan broke down.