7 Eurovision winners nobody talks about any more 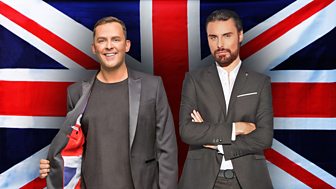 Given the amount of effort contestants go to to ensure they stand out, you may assume that every single winner of the Eurovision Song Contest would be seared across the minds of viewers for all time. But with every new glitterbomb delight, every Conchita Wurst, Lordi or Dana International, there's an equally worthy winner who has taken a step back from the white-hot intensity of the post-Eurovision media spotlight...

Nicole Hohloch (now Seibert) can rest satisfied that she represented the Eurovision ideal to the full. Her song, Ein bißchen Frieden (A Little Peace) won the 1982 contest for West Germany, and it went on to be a huge hit across the continent. Her success will have been aided in no small part by the decision to record versions in multiple languages. In France it was La Paix sur terre; in Holland Een beetje vrede; in Spain, Un poco de paz; in Denmark, En smule fred; in Poland, Troszeczkę ziemi, troszeczkę słońca and in Hungary, Egy kis nyugalmat kívánok én. And there were Russian (Немного мира) and Slovene (Malo miru) versions, too. The English version even became the 500th No.1 single in the UK Singles Chart.

The following year she attempted to win the World Popular Song Festival in Tokyo, with the song So viele Lieder sind in mir, but was beaten by a Hungarian group called Neoton Família). A well-respected star in her native Germany, Nicole continues to record and perform, and has released over 30 albums to date. But she's all but disappeared from the global stage.

[WATCH] Olsen Brothers perform Fly on the Wings of Love

Some countries look for brand new pop talent to take to Eurovision, while others sift their existing pool of musical talent. In 2000, Denmark took the latter option, signing up veteran duo Brødrene Olsen, or the Olsen Brothers Jørgen and Niels (also known as Noller). Born in the early 50s, they formed a band in 1965 called The Kids, who supported The Kinks on their 1965 tour of Denmark when Niels was just 11 years old. They released their first single in 1967 and their first album in 1972, and kept pace with the changing times like the junior rocking veterans that they were to become.

After winning the millennial competition with the flamenco-tinged Fly on The Wings of Love, the Olsens did what showbiz veterans do, and used their appearance at the following year's competition in Copenhagen to promote their latest single Walk Right Back, then took up their career where they'd left off. They did attempt a second entry for Eurovision, in 2005, but their Little Yellow Radio was beaten into second place of the Dansk Melodi Grand Prix by Jakob Sveistrup's Talking To You.

Riva were the winners of the 1989 contest, representing what was then Yugoslavia. Their remarkably chipper song Rock Me was the country's first and only win, and even though winning brought the band a lot of positive attention, they split up in 1991, only a year after taking the role of local hosts for 1990's Eurovision final in Zagreb. As an aside, that role had been taken a year previously by a young Céline Dion, who had won for Switzerland in 1988.

Singer Emilija Kokić maintained a pop career in what became Croatia, and even attempted to enter again as a solo singer in 2008, but her song Anđeo came in joint 6th place at the national Dora festival, which helps select songs for entry. In 2011 she went back as a member of the jury.

In the mid-90s Ireland sustained a winning streak that no other country has come close to matching. Three consecutive wins, which ensured that they became the host nation for the contest three times in a row. Paul Harrington and Charlie McGettigan delivered the third of those wins, having entered their baby-boomer lament Rock 'n' Roll Kids in the 1994 contest in complete contrast to all of the superdynamic superpop most commonly associated with the competition.

In fact, the song was considered to be so radically different there were even suggestions that it was written to ensure someone else would win that year. No male duo had ever won Eurovision before, and there was no dancing, no glitz, no glamour in Paul and Charlie's performance. However, Rock 'n' Roll Kids touched the hearts of the various voting panels, and actually scored over 200 points, a first at the time.

Since the win, Charlie has returned to the life of a touring singer/songwriter, while Paul worked with Michael Flatley on the theatrical show Celtic Tiger. He released a version of Molly Malone (as The Harrington Brothers) to support Leinster Rugby Team in 2009, and most recently appeared as a celebrity chef in The Restaurant.

Marie N (Marija Naumova) entered Eurovision on behalf of her native Latvia in 2002, and won with her own song, I Wanna, her third attempt to enter the contest. Part of her stage presentation was a neat subversion of the classic Bucks Fizz long skirt/short skirt whipaway, in that she appeared in a suit, with a natty fedora, only to have her jacket whipped off at a key moment in the song.

Oddly, her winning song was never released outside of Latvia as a single and even within the Latvian charts it stalled outside the Top 30. Since then she has maintained a distinguished career as a singer and entertainer within her home country and in Europe, and in 2005 she was named the UNICEF goodwill envoy to Latvia, much like Geri Halliwell. In 2012 she announced that she'd be taking a musical haitus for personal reasons.

For British viewers, 2003's Eurovision will always be marred by the memory of Jemini, the UK's entry, returning home with no points at all. But for Turkish pop fans, it was the year Sertab Erener brought home the bacon with Everyway That I Can. Already a pop star in Turkey thanks to her work with the enormously successful producer Sezen Aksu, Sertab's opera-trained voice could also be heard singing in Turkish-dubbed versions of Disney films Pocahontas and The Hunchback of Notre Dame.

After her Eurovision win, she released an English-language album No Boundaries. Her cover of Bob Dylan's One More Cup of Coffee was used in the film Masked and Anonymous, which starred Dylan himself. Her pop success has continued, but largely only in Turkey. Going back to the movies, she recorded the Turkish dub of Something That I Want for Tangled in 2010, and could be heard singing the Turkish Airlines jingle Globally Yours in 2012.

Marija Šerifović's Molitva (meaning "prayer") won in 2007, and represents a key moment in Serbian identity. It was their first entry into the contest, coming shortly after they claimed independence as a nation, and it won with 268 points, still comfortably their highest score to date. Marija was already established as a popular performer when she entered Eurovision, and, as both the daughter of highly regarded folk singer Verica Šerifović and also a prominent member of the Romany community, she was a perfect choice to represent the diversity and potential of this emerging state.

The true extent of her popularity was proven when she arrived back at Belgrade's Nikola Tesla Airport to find a mass rally had been prepared in front of the Civic Assembly with nearly 100,000 people in attendance. Then there were the 60,000 who came to see her perform in her home town of Kragujevac. After the win, Marija threw her energies into supporting local political parties. She also helped Ireland choose their 2008 entry for Eurovision, and was on the panel to help Sweden pick their entry in 2009. Still very popular in Serbia, she was the subject of the eight-part documentary series Confession for Prva Srpska Televizija in 2013, which came with an accompanying book and album.