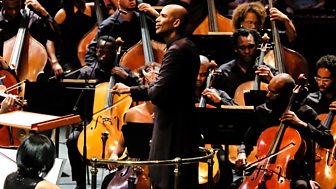 The Proms 2017 season is over, but the concerts live on! On our Facebook page, a highlights clip of the Chineke! Prom is still clocking up huge numbers – an astonishing 2.6m views and 57,000 shares as of 1 October 2017, making it the social-media success of the season.

Truly, Prom 62, conducted by Kevin John Edusei, was the breakout Prom of the festival and below are a few reasons why.

But first, enjoy the best bits from the concert:

Yes, it really was as recently as 2015 that the Chineke! Foundation was established by double bassist Chi-chi Nwanoku OBE to provide, in the foundation's words, "career opportunities to young Black and Minority Ethnic (BME) classical musicians in the UK and Europe".

Its flagship ensemble is the Chineke! orchestra and that it could go from forming to debuting at the Proms in such a short period of time captured imaginations – within classical music and far, far beyond.

In their ranks is a superstar youngster

Not every musician, however good they are, is sprinkled with stardust but cellist Sheku Kanneh-Mason certainly is. He's gone from being awarded the Marguerite Swan Memorial Prize for the highest marks in the UK for Grade 8 cello (aged 9), to winning BBC Young Musician 2016, to inking a deal with Decca, to making his Proms debut with Chineke!, and he's still only 18. And what a debut performance he gave us – superb accounts of Dvořák's fabulous Rondo (above) and David Popper's Hungarian Rhapsody.

They provide a great platform for new writing talent...

Ahead of the Prom, 33-year-old composer Hannah Kendall told us: "This is a huge thing. I'm a Londoner so my earliest memories of experiencing classical music live were at the Proms. I must have been seven maybe when I went to my first, but I'd never have dreamt of being performed at the Proms. It's... crazy."

Her piece, The Spark Catchers – a BBC commission and world premiere – opened the Prom in extraordinary fashion. And, as suits a composer from London, writing for an orchestra based in the capital, it took on a very London story. The work was inspired by a Lemn Sissay poem about, Hannah said, "the women who worked at the old Bryant & May match factory in East London that used to be on the borders of what's now the Olympic Park, and the match girls going on strike due to labour conditions. It was a huge thing at the time. Their stories are about revolution, standing up for your rights and being bold and courageous, and that's who I am as a person."

...and established writing talent that deserves a bigger audience

In a 2015 Guardian article, Tom Service, who presents for Radio 3, declared George Walker to be "the great American composer you've never heard of". And this neglect was despite the fact that Walker was the first African-American to win the Pulitzer for music.

In the internet age, his work is coming into better and better focus and that's long-overdue. Walker is 95 and this performance of his best-known piece, Lyric for Strings – written when he was 24 – marked his Proms debut.

They picked a perfect programme

The programme was very much in the oldest tradition of the Proms, as Sir Henry Wood conducted them – short pieces, lots of them (eight in this instance) and of great variety. We'll leave you with this clip, because it perfectly sums up the Prom – the concert that went viral. Take it away, Jeanine De Bique, singing – what else? – Handel's 'Rejoice greatly' with more joy, style and class than seems humanly possible.

What an evening! Watch further highlights and interviews on the Chineke! Prom page.