The 7 most controversial dance fads in music 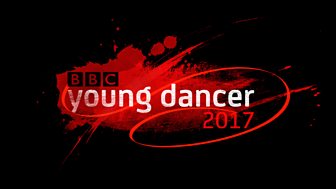 Friday 31 March saw the Ballet Final of BBC Young Dancer 2017 on BBC Four, and while we might not think of ballet as being a controversial dance form, it's caused its fair share of scandals - not least when Vaslav Nijinsky's choreography combined with Igor Stravinsky's score to cause a near-riot at the premiere of The Rite of Spring in Paris, 1913.

The truth is that there's barely been a moment in history when a new dance hasn't appalled parents, dramatically widened the generation gap and shocked newspaper editors. Here are seven crazes that caused a genuine fuss, beginning with...

The Oxford English Dictionary defines twerk as a "dance to popular music in a sexually provocative manner involving thrusting hip movements and a low, squatting stance." As an example of how the word is used, it suggests: "Just wait till they catch their daughters twerking to this song." Well, quite! The word itself is thought to come from New Orleans bounce music culture (its use in songs has been traced back to 1993), and became a well-known dance in hop hop videos towards the end of the 2000s. After Miley Cyrus twerked with Robin Thicke at the 2013 MTV VMA Awards, it went viral, causing outrage and not just because of the sexual nature of the dance. She was accused, including by the Guardian, of cultural appropriation.

There was a near-frenzy of interest in what twerking was. As the Guardian also reported, the search term "what is twerking?" shot to the top of one of Google's annual Zeitgeist lists in 2013, and researchers managed to trace the word's origins back to 1820. And then Planet Earth II filmmakers found out that bears have been twerking away - sort of - in the woods, possibly for centuries. 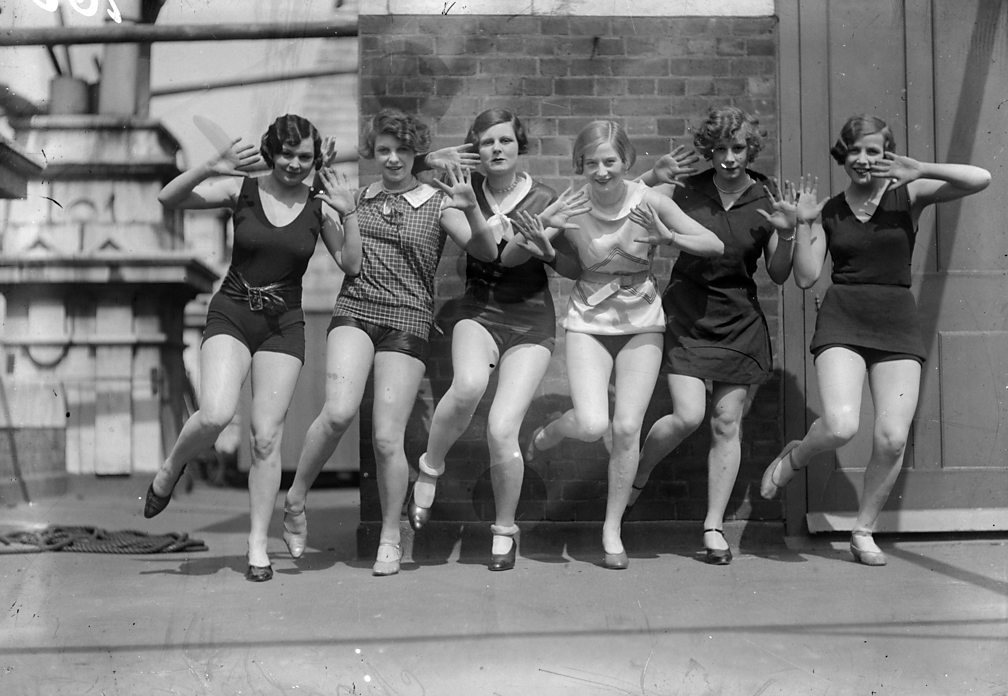 Another consequence of twerkgate was that it caused much discussion about other dance scandals of yore, particularly the controversy surrounding the Charleston, a 1920s jazz age dance named after the city in South Carolina where it originated. In a BBC News article titled, What do twerking and the Charleston have in common?, choreographer Jreena Green says, "Twerking [is] nothing new, it's from the Charleston," and likened the freewheeling moves of 'flappers' - female hipsters of the time, essentially - to those of twerkers today. And it wasn't just in the US that the Charleston became a sensation. It made it to our shores in 1925, and as historian Lucy Worsley says, "It took the dance floor by storm. It allowed women to break free from a man's embrace and dance on their own."

[LISTEN] BBC Radio 3 - The Listening Service: Whatever Happened to the Watlz?

It's fascinating that the Charleston could cause outrage by separating the sexes on the dancefloor, because nearly every dance craze that caused contention before the jazz age did so by bringing young folk close enough together to terrify older members of society. In the above episode of Radio 3's The Listening Service, presenter Tom Service explains how the waltz caused a scandal in the early 19th century because of "the shameless physical closeness of the dancing couples". And it had been preceded by even more racy renaissance-era dances like the volta, which Service suggests would "make any of today's waltzers blush since it required the swain - the bloke - to physically lift his lady into the air and then turn her about. The technique involved lifting her up with one of his hands on her busk... and turning her using the torsion of his thigh between her buttocks".

Do the volta today, in other words, and you'd likely be thrown out of every nightclub in the land. Dances that followed it, like the minuet, were tamer and easier, as indeed the waltz is - with one main difference. As dance historian Darren Royston explains: "It was two people face-to-face. Earlier court dances, such as the minuet, were really done with dancers side-by-side... It was a 'turning' dance, and this is where the scandal of the waltz is made - not necessarily because you can face your partner, but because no one else can really see what's going on."

You can't mention a turning dance without remembering the twist, the worldwide dance craze spawned from Chubby Checker's 1960 cover of the Hank Ballard and The Midnighters song The Twist. A year later a spin-off film, Twist Around the Clock, was released starring TV host Clay Cole, who sings the title track in the above clip of cool kids doing the dance.

The twist is all in the hips, and that's what made it controversial. It was considered sexually provocative, vulgar and, as BBC iWonder reported in 2014, "Medical concerns were raised. An orthopaedic surgeon reported a rise in knee injuries and the Society of New Jersey Chiropractors said it could cause 'strains in the lumbar and sacroiliac areas'."

Other famous 60s dances like jerk, the pony, the mashed potato and the funky chicken were all inspired by the twist. 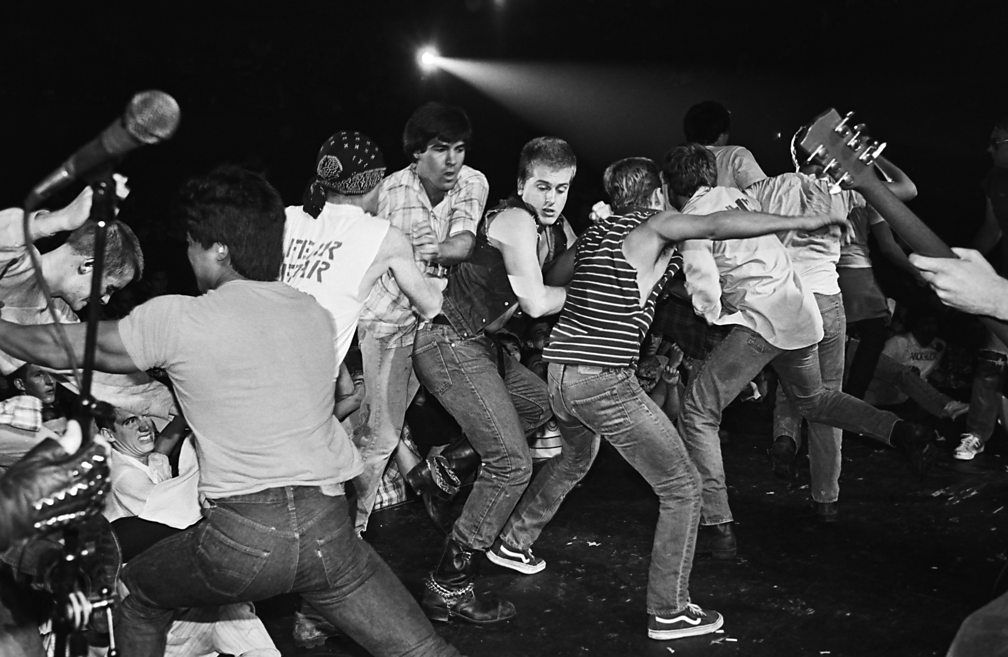 Like the Charleston, the twist is performed without a partner but in a group, and the same applies to moshing - a combination of punk pogo dancing, heavy metal headbanging and slamdancing. And, as all rock fans know, although moshing seems to be an incitement to chaos, mosh pits are usually organised affairs with sets of rules to ensure people don't get hurt.

Moshing endures, but it became a fad in the early-80s punk scene in the US before spreading to other forms of rock and also into raves. And although moshing is regarded by many as harmless fun, on occasion it can be overtly violent and dangerous. To protect their fans, Washington DC punk band Fugazi took a stand against moshing at their gigs in the 1980s and a small number of people have died as a consequence of being crushed or fighting in mosh pits, including at two Smashing Pumpkins' shows (in 1996 and 2007) and at a Korn performance in 2006.

For those who didn't want to rock in the 1980s and 1990s, there was raving - not necessarily a specific dance style, although all ravers (and Bob the Builder fans) will remember Big Fish, Little Fish, Cardboard Box, but a movement that caused a scandal largely because of its close association with illegal drugs and trespassing. The above documentary is about Spiral Tribe, the free-party sound system that was established in 1990 by a group of young people who thought they'd found an entire new way of living, powered by music, dancing, love, and, yes, drugs.

No dance fad in the UK managed to get caught up in politics more than rave and, as the Guardian reported in 2010, one rave in particular - the Castlemorton Common festival in 1992 - "set in train the moral panic that led to the 1994 Criminal Justice and Public Order Act". Dancing was forced back indoors again, discotheque-style; superclubs like Cream in Liverpool and Fabric in London emerged; and the rave sound, acid house, splintered into an incalculable number of new styles.

We'll finish with the lambada, a Brazilian dance that can be traced back to the 1930s when it caused almost as much outrage as the tango had 50 years earlier. The issue, as BBC iWonder reported, was how close it brought dancers together, "with hips pressed together as they performed a series of spinning steps". Allegedly, the Brazilian president of the time, Getulio Varga, was horrified by the dance's "immorality" and banned it, but the lambada got its revenge when it became a craze again in 1989 after French-Brazilian pop group Kaoma had a hit with a song named after it. Naturally, the BBC brought in an expert to teach the steps (see above).