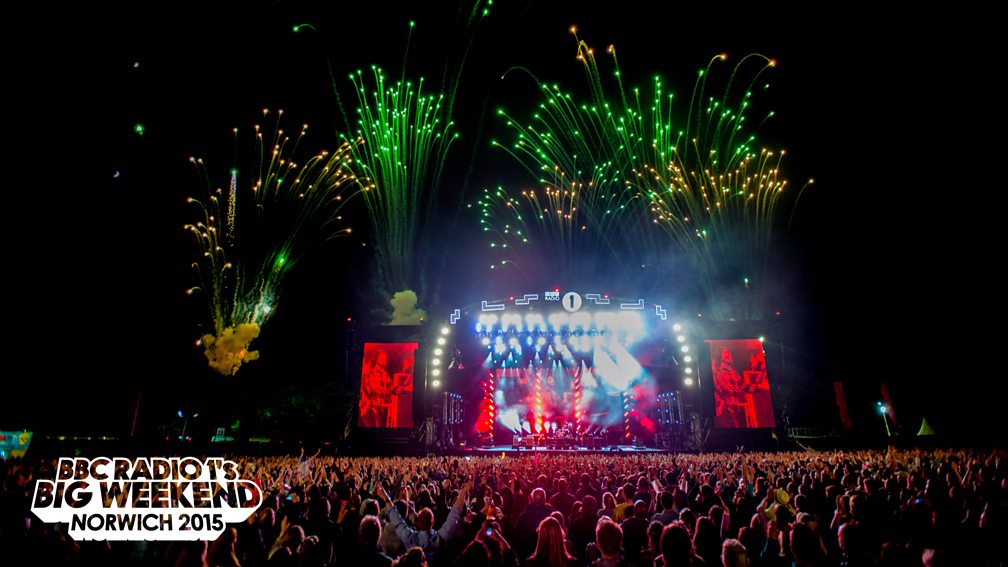 It was a very, very Big Weekend, with highlights aplenty and astonishments to the left and right, including Taylor Swift, Foo Fighters, 5 Seconds of Summer and many, many more. Here are just five of our top picks from the extensive video archive of an unforgettable couple of days.

1. Olly Murs had Wrapped Up Rapped Up

Travie McCoy is a busy man, and he clearly can't go everywhere that Olly Murs goes in order to provide that crucial rap section in Wrapped Up. So, given the choice between silence, a recording of Travie's mellow tones, doing the rap himself (as Charli XCX does with Fancy) or welcoming Nick Grimshaw onto the stage in startling yellow shorts, Olly chose the latter option. He's a brave, brave man.

Mind you, Nick's get-up wasn't the only eye-opening fashion moment from Olly's set. Ella Eyre joined him on stage wearing a jacket with his face on the back of it.

Wearing that must be a truly (cough) im-Murs-ive experience.

Ever the football fan - he literally has nothing but love for the game - Snoop turned up ready to win over Canaries supporters in a specially-made Norwich City FC top, with "Dogg" on the back.

This appears to have had a galvanising effect on the team themselves, who went on to secure promotion to the Premiership in the Championship play-off final.

3. Jess Glynne and her Coat of Many Colours

As well as providing some of the most arresting sounds of the weekend, Jess proved equally dazzling on the eye in an outfit that is part wafty gauze, part jumpsuit and part technicolor dream coat. That rainbow theme was replicated in the outfits of her backing singers too (although their sleeves were a little less flappy).

Bringing the spirit of the Live Lounge into the intensely hot and sweaty environment of the In New Music We Trust Stage, Slaves not only embarked on a fierce re-interpretation of Shutdown - emphasising the rocking riff in bluesy style as if the White Stripes had never gone their separate ways - they brought Skepta himself out to add some devastating flow to that final verse.

Oh, and can we have some extra applause for a man prepared to rock a snug hoody amid galloping temperatures? Good.

Taking a look at some of the rockier acts at this year's Big Weekend, it's clear that when it comes to stage-wear, black is the new black. Catfish and the Bottlemen, Jamie T, alt-J, even Lethal Bizzle favoured sleek monochrome over day-glo animal print or glittery jackets.

As part of the grand finale of the similarly raven-hued Muse set, cannon-loads of confetti were shot into the sky, and streamers fired from the Main Stage lighting rig, and rather than being super bright, colourful and sparkly, as one might expect from, say, Taylor Swift's confetti, this was darker and and more sombre stuff. Celebratory, yes. A visual treat, for sure. But at no point did it risk undermining the serious tone of Muse's, erm, muse.