6 of the strangest lawsuits in music

According to a tweet posted by Lana Del Rey, Radiohead are suing for "100% of the publishing" of Get Free, the closing track of her latest album, Lust for Life, because the song apparently sounds similar to Creep, the Oxford band's 1992 breakthrough hit. To complicate matters, as Newsbeat pointed out, "Radiohead themselves were successfully sued by The Hollies over Creep's similarities to [1972 hit] The Air That I Breathe".

Now Radiohead's publisher has denied formally suing Lana Del Rey, saying in a statement that negotiations are ongoing, and also that the band are not demanding 100% of the song's publishing rights.

So, while all this plays out, let's remind you of six other weird and wonderful legal showdowns from the world of pop... 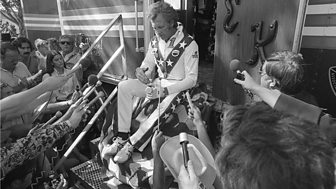 Suing for copyright infringement can take many forms, including filing a case claiming illegal use of a trademarked name and likeness. And so it was that American daredevil Evel Knievel - world famous in the 70s and 80s for attempting massive motorcycle jumps, including a failed one in front of 90,000 people at Wembley Stadium in 1975 - sued Kanye West after the rapper had renamed himself Evel Kanyevel and aped Evel's shtick in the video for 2006 single Touch the Sky.

As the Washington Post reported, Evel wasn't best pleased, saying: "That video that Kanye West put out is the most worthless piece of c*** I've ever seen in my life, and he uses my image to catapult himself on the public... The guy just went too far using me to promote his filth to the world."

Knievel's lawyer, Richard Fee, dismissed suggestions that the video could be defended on grounds of parody, forcing Kanye to nip down to Evel's home in Florida to sweet-talk the stuntman. The ruse worked, as BBC News reported in November 2007. "I thought he was a wonderful guy and quite a gentleman," he said. "We settled the lawsuit amicably. I was very satisfied and so was he." Knievel died shortly afterwards.

Chubby Checker made the twist dance style famous when he had a hit with his cover of the 1960 Hank Ballard song The Twist. Many year later, in 2013, he got his knickers in a twist after technology company Hewlett-Packard launched 'The Chubby Checker App', which purported to let users estimate the size of a man's penis based on his shoe size. According to the Guardian, UK, US and European sizes were accepted.

Chubby's name is trademarked and he sued. His lawyer Willie Gary (too much!) said: "This lawsuit is about preserving the integrity and legacy of a man who has spent years working hard at his musical craft and has earned the position of one of the greatest musical entertainers of all time."

Chubby, Willie and Hewlett-Packard settled in 2014, with the tech giant agreeing to not further use the singer's name. By then the app had already been withdrawn.

Those of you with a good memory and a fondness for watching reality TV cooking shows will remember Geordie chef Terry Miller, who won ITV's Hell's Kitchen in 2005 with his signature dish - King Prawn Rockafella.

As the Journal reported, he used his prize money to set up an eatery in Newcastle called Rockafella, and promptly heard from lawyers representing Jay-Z's label, Roc-A-Fella Records, who claimed the name of his restaurant infringed their copyright.

In 2008, Miller closed Rockafella - blaming the credit crunch - but the legal battle raged on, because Miller wished to sell foods under the brand name. Incredibly, he won an initial ruling in 2010, and said: "Unfortunately the restaurant is gone now, but I still hope to market my King Prawn Rockafella signature dish, possibly through supermarkets."

Jay's team appealed and this time Chef Miller lost. He was blocked from branding his catering business under the name, although he did retain the right to use Rockafella for a restaurant. By then, though, he'd taken a job cooking on Russian millionaire's yacht moored off the coast of Croatia.

History is littered with cases of the innocent suing the long arm of the law for wrongful arrest, but you don't often come across the law filing a case against an accused person who has already pleaded no charge, acknowledged their guilt and accepted their penance. However, as the Guardian reported, Marcelo Rodriguez of the LAPD claimed he had been "emotionally and mentally damaged by public remarks and in a music video" after George Michael was infamously charged in 1999 for lewd behaviour in public toilet at Will Rogers Memorial Park in Los Angeles.

In interviews, Michael suggested he had been set up by Rodriguez, who was in plain clothes, and the video in question was Outside, which satirised his arrest. A Los Angeles Superior Court judge dismissed the case, saying Rodriguez could not claim damages for distress because he is a public official.

The RIAA v. a dead woman

The boom in illegal downloading of mp3s at the beginning of the 2000s caused all manner of headaches for organisations tasked with ensuring musicians get paid for people listening to their music. In the US, that organisation is called the Recording Industry Association of America (RIAA) and one solution they came up with was to file suits against individuals who they believed were stealing large amounts of copyrighted material. Some of the lawsuits, including targeting a 12-year-old girl, were controversial, and some were plain bizarre, such as the 2005 case of Gertrude Walton, who received a writ claiming she had illegally downloaded some 700 tracks despite the fact that she was dead.

"I believe that if music companies are going to set examples they need to do it to appropriate people and not dead people," her daughter Robin Chianumba told CBS News. "I am pretty sure she is not going to leave Greenwood Memorial Park to attend the hearing." Robin added: "My mother wouldn't know how to turn on a computer."

The RIAA admitted that perhaps Walton wasn't the 'smittenedkitten' they had been looking for and dropped the suit.

Bill Wyman, formerly of The Rolling Stones, was born William George Perks Jr., but that didn't stop him in 2002 from sending a cease-and-desist order to Bill Wyman, an American film and music critic, who was born Bill Wyman.

As SF Gate reported, the writer was asked to stop being Bill Wyman "if indeed, (his) given legal name is Bill Wyman (a fact which we would insist be reasonably demonstrated to us)", or include a disclaimer accompanying work he published.

Wyman's employers, the Atlanta Journal-Constitution, chose not to respond to the ex-Rolling Stone's lawyers, who said: "Our request for a clarification has been largely accomplished, and with a reach and level of effectiveness well beyond that for which we might otherwise have hoped."