Are these music's most outlandish stage props?

What makes a big pop concert truly memorable? Successive generations of stars have learned that just playing the hits isn't enough - you need to visually dazzle punters as well. But when every act can call on state-of-the-art laser displays and giant confetti cannons, a more unique approach is called for. Hence the custom-built, show-stopping, super-sized stage prop.

Of course, extravagant stage props come with the risk of malfunction - in 1974, prog rockers Yes accidentally trapped their drummer Alan White inside a giant seashell (a mishap that was recreated in This Is Spinal Tap) and Fleetwood Mac once spent a large proportion of their tour budget on a 70ft inflatable penguin that refused to inflate. But that hasn't impeded the stage prop arms race; whether it’s Coldplay's light-up Xylobands or Lorde’s arty glass box of dancers at Glastonbury 2017, music's best set designers continue to innovate. Here are some of their finest creations.

Queen Bey knows how to accessorise on stage, whether she’s busting moves in a shower of sparks or walking on air in killer heels. Sure, there was that one time her hair got caught in a wind machine - but mostly, the props have been immaculate. Her 2016 Formation World Tour was designed by British visionary Es Devlin (who has also created concert sets for Adele, Pet Shop Boys, Miley Cyrus, Muse and loads more), and it took stadium-sized props to the next level. As well as a 60ft “Monolith” video tower and treadmill/runway, the secondary “Bey” stage transformed into an epic water feature (with a capacity of 2,000 gallons) for the show’s finale. 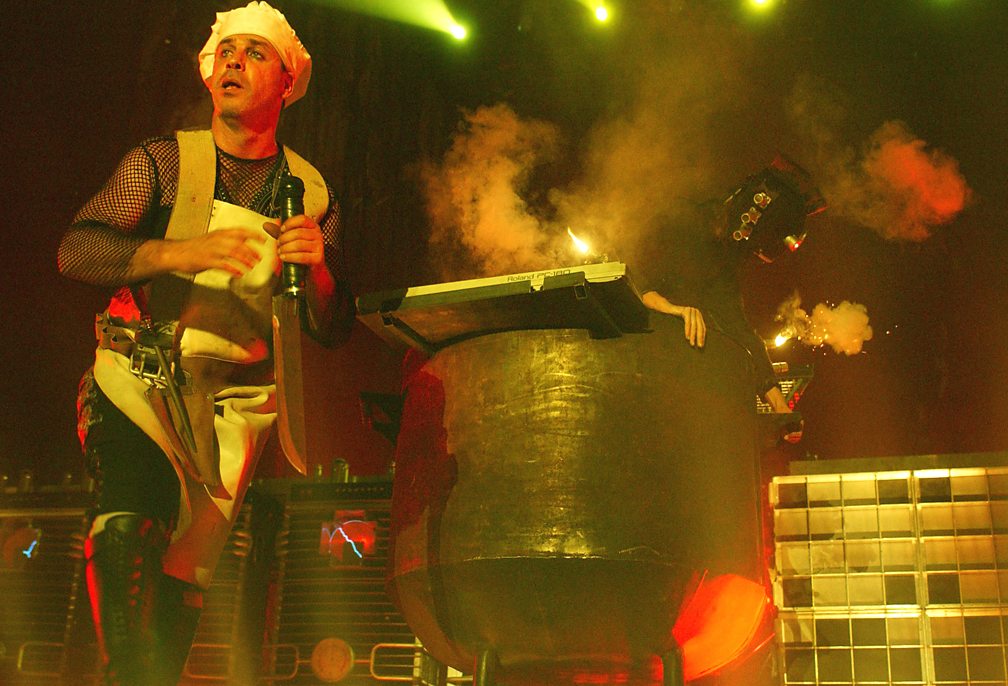 German industrial metallers Rammstein have become world-infamous for their pyrotechnic-fuelled, provocative stage props. For their earliest shows, the band would just pour petrol around the stage and set it ablaze, but their budgets and prop quality had rocketed by the time of their 2004-5 Ahoi tour. Sharpest prop of this set was the onstage cooking pot, in which mic/knife-wielding frontman Til Lindemann appeared to flambé keyboardist Flake Lorenz with a flame-thrower - while singing their cannibal-themed 'love song' Mein Teil, naturally. 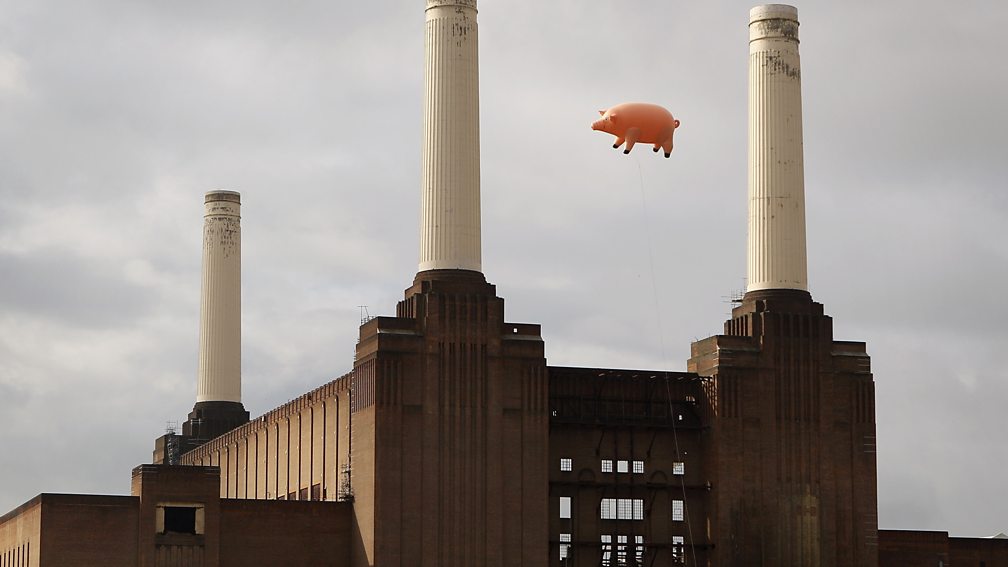 Pink Floyd arguably set the benchmark for theatrical stage props; their helium-filled porcine icon was originally created in 1976 (with the help of artist-designers Jeffrey Shaw and Hipgnosis) for the band’s Animals album cover art. Since 1977, the flying pig prop has been a staple of Floyd live shows, and it continues to appear in various incarnations (and scrawled with different slogans) at modern gigs by both the David Gilmour-fronted Pink Floyd and estranged former bandmate Roger Waters. The giant flying piggy has made a break for freedom on more than one occasion - in 2008, it floated into the Cali desert during Waters’s Coachella set and festival organisers offered a $10,000 reward for its safe return. 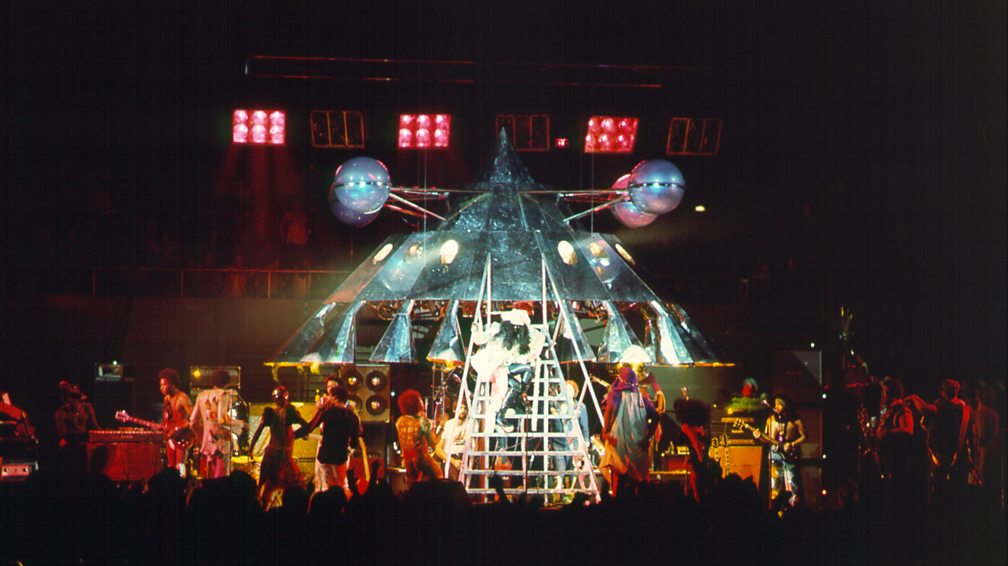 Way-out funk/soul/rock pioneer George Clinton and his legendary collective Parliament-Funkadelic first launched their full-scale UFO prop during concerts to promote their 1975 album, Mothership Connection. The lavish live Mothership, replete with flashing lights and sci-fi sounds, would land on stage to deliver Dr Funkenstein, aka Clinton, to the masses. Soaring costs meant that the original P-Funk Mothership was retired from service (apparently it was dumped in a Maryland junkyard) but in 2011, a 1,200lb aluminium replica was acquired for the Smithsonian Museum of African American History and Culture. 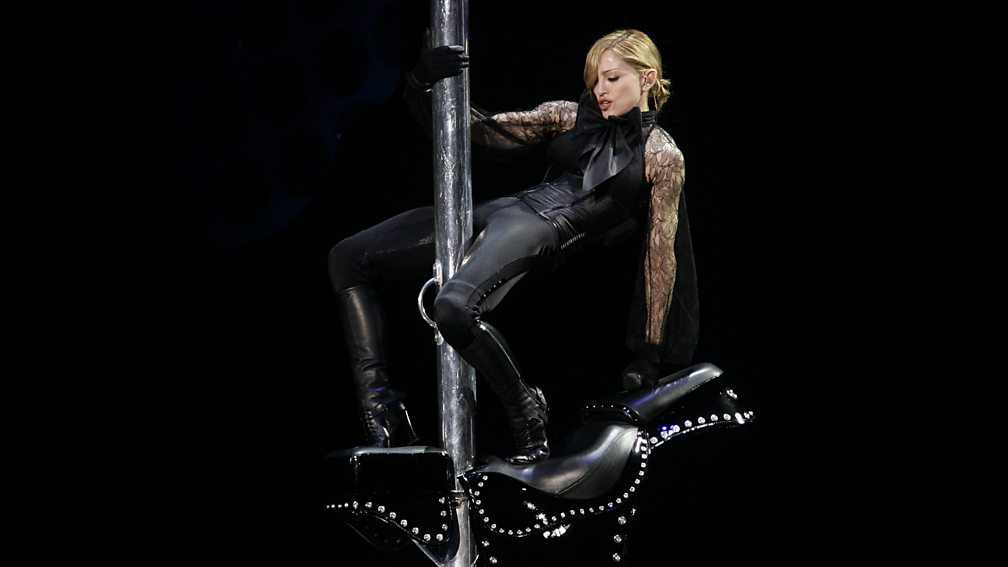 By the 21st century, Madonna had sealed her rep as a show-stopping performer, but she could still spring some surprises. Her 2006 Confessions tour featured a massive discoball pod, parkour dancers and a mirrored crucifix - but perhaps the most impressive prop of all was Madge’s one-woman carousel/hobby horse, which she rode while singing Like a Virgin and performing yoga and pole-dancing moves above the crowd. Good going for anyone, especially a star approaching her 50th year.

U haven't really lived unless you saw U2 come out of a giant, glittery, rotating, disco ball lemon. I saw it in '97.

Bono’s stadium rockers paid homage to the P-Funk Mothership while creating their own consumer satire for the Popmart world tour in 1997-8. Its elaborate stage set, created with Willie Williams and Mark Fisher, included a 40ft mirrorball lemon (with a nod to their track of the same title), designed to split open and reveal the band for their encore. Unfortunately this occasionally malfunctioned, trapping the quartet inside the giant fruit while the baffled crowds waited - less of a grand finale, more of a sour note.

Here’s where a drum solo becomes an actual thrill ride. Tommy Lee, drummer with LA rock’n’rollers Mötley Crüe, was never inclined to be stuck behind his kit, so his “Crüecifly” drum rollercoaster was developed, allowing him to loop-de-loop while playing. Intensive tests and programming created a state-of-the-art prop which took four hours to assemble each night and even featured a “Zero-G” holder for Lee’s spare sticks. Such flawless detail didn’t stop the rollercoaster from malfunctioning on New Year’s Eve during the band's final tour in 2015 - Lee had to be rescued from his upside-down position but the show still went out with a bang.

He came out and got in a fight with Bruce, Bruce ripped his heart out and threw it in the crowd. RIP Eddie

Iron Maiden’s snarling zombie-like mascot Eddie has been a perennial draw since the band’s early '70s gigs, when he debuted as a home-made papier-mâché head, spewing fake blood. Not only is Eddie the star of almost every Iron Maiden record sleeve since their 1980 debut single Running Free, he steals the show every time he appears on stage. The Eddie stage props have grown increasingly elaborate over time, ranging from stilt-walkers to inflatables, shooting fire from his eyes, and sometimes even grabbing a guitar to play along. 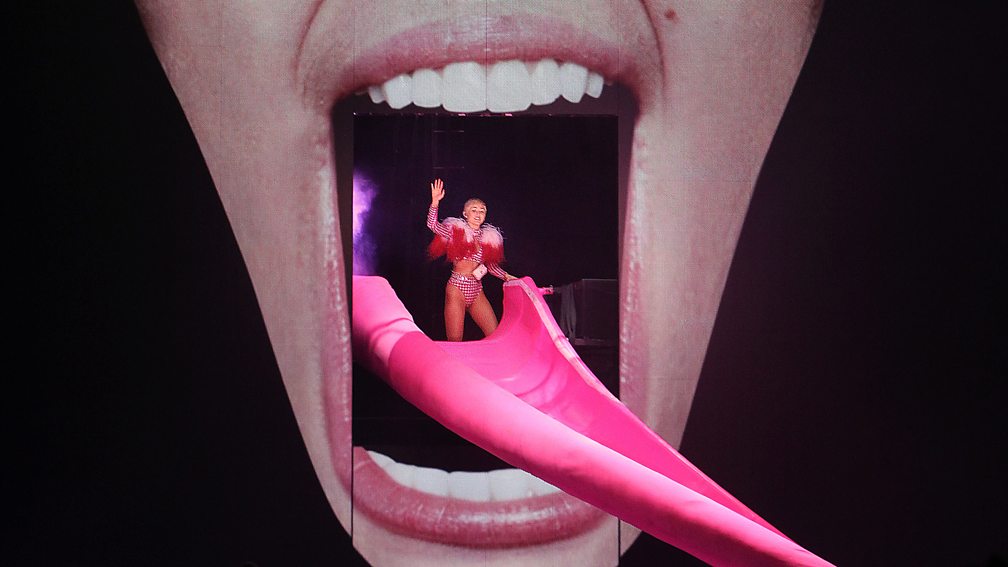 Miley Cyrus has made plenty of tongue-in-cheek statements - quite literally when it came to making a suitably OTT entrance to her Bangerz tour in 2014. The star ricocheted onstage via a giant pink tongue-shaped slide protruding from a projection of her face. The tongue caused its own controversy (one crew worker claimed he was injured during its construction) but the prop design and performance proved that Miley had the pop game licked.