7 of the weirdest things people have made into records

When it comes to making records - as in, music pressed into grooves on a disc and played with a needle - vinyl has been the material of choice since the early 1950s. It's less brittle than shellac, which had been the dominant material for 78rpm discs, and much more hard-wearing than the wax Edison cylinders of the early 20th century.

But while vinyl is the standard, it's not the only material you can make a record from. In fact, any material capable of sustaining a flat-ish surface and some grooves will do, although some are more suited to sustained use than others.

Vinyl fans are keen to stress that records sound warmer and possess more characterful crackle than digital recordings, so a Radiohead song cut into a slice of maple, as Amanda Ghassaei has done here, should be even better. As you can hear, there's almost more crackle than music, and if it's warmth you're after, you can chuck your record on the fire when you're done.

According to her Instructables page, Amanda cuts her records using a laser cutter, and has experimented with wood, acrylic and even paper, adding, "I'm sure there are many more materials that would work."

While it's probably an extremely bad idea to put anything that is comprised of water on your record deck, the temptation to give Blue Ice by Swedish band Shout Out Louds a spin would be fairly hard to beat. As you can see from the clip above, you create the record yourself, by filling a mould with water and freezing it, and, on first play at least, ice appears to provide a far more stable surface for music than wood.

Should you be lucky enough to get hold of one of the moulds, why not try adding a dash of squash to make an actual ice-pop?

[WATCH] Breakbot's "By Your Side" chocolate vinyl

In September 2012 Ed Banger Records released By Your Side by Breakbot in a limited run of 120 chocolate 12" singles. These were strictly designed to be played once and then eaten. Shortly afterwards Croatian singer Gibonni had his album 20th Century Man pressed onto chocolate, celebrating its release with a great big listening (and eating) party in Vienna.

He also issued this provocative statement: "When I heard of the possibility of making the chocolate version I did not want to miss the opportunity. I read that chocolate contains a hormone of happiness and boosts your libido, so I thought it was a perfect combination for the rock-based music we loved in the 1980s. I widened my fan base by singing in English. Now perhaps I will widen it even more when they realise they can eat it after listening." 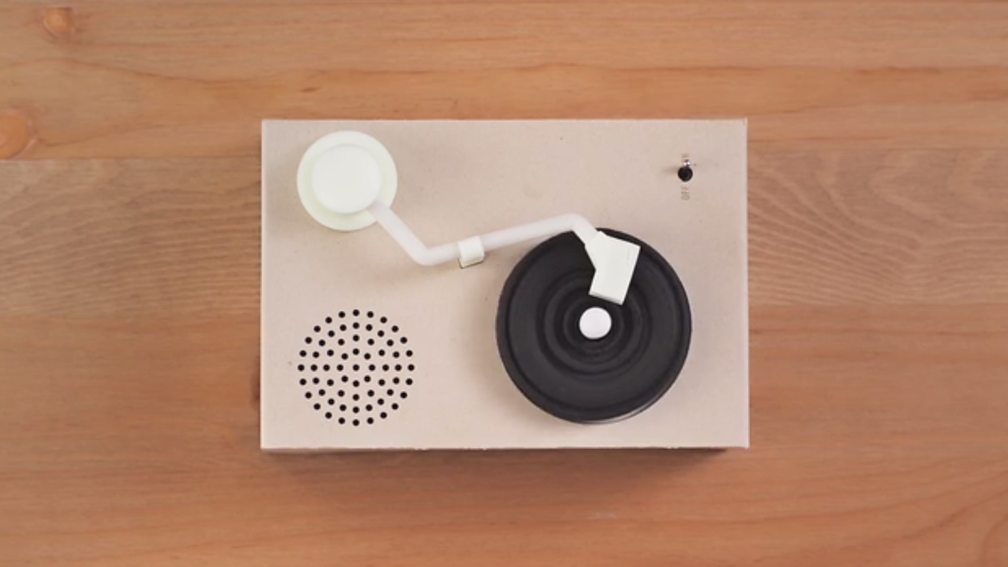 Listening to music at home can be a deeply relaxing experience, one that would suit a nice cup of tea and some biscuits. But what if one of those biscuits could also work as a record? That's the unlikely question that an American biscuit brand sought to answer earlier this year when they created playable biscuit discs for a marketing campaign, each configured to play a different arrangement of their signature tune, Wonderfilled, which was written by Owl City.

During the 1960s, the music of beat groups such as The Beatles and The Rolling Stones was not considered appropriate listening for the young people of Soviet Russia. But while their records were banned, appearing only on the black market - as this BBC News report confirms - and at a premium, it was possible to get bootleg copies of their latest music, which would be etched onto discarded X-ray prints using a record player which had been modified to act as a record cutting lathe. The centre hole was often made with a lit cigarette (and occasionally made for a slightly woozy-sounding musical experience).

These bootlegs, now relics of a pre-cassette and pre-digital age, were later called "bone music" and have since become collector's items.

The recording above is from the National Museum of American History, and it features Alexander Bell, his cousin Chichester Bell and Charles Sumner Tainter recording a slightly overexcited version of Mary Had a Little lamb onto a glass disc in 1885. The discs, as you can hear, were not remotely hi-fi and reveal the sonic limitations of the format, which, when coupled with the extreme fragility of glass, really underlines just how unsuitable it is for wider distribution.

[LISTEN] The golden record: taking the sounds of Earth into space

If you were making a greatest hits compilation of human music to send out in the (possibly vain) hope that an alien civilisation will be able to play the media and experience humanity's most wondrous emotive experiences, what would you pick? NASA sent the Voyager 1 and 2 spacecrafts out into the wider galaxy complete with a gold disc comprised of greetings in different languages, images (each created from an interpolation of 512 lines of analogue code), natural sounds such as the wind on Earth, surf and animal noises, and music.

The discs were made of gold-plated copper - for supreme durability - and housed in an aluminium case, which had an ultra-pure sample of the isotope uranium-238 electroplated upon it. Among the honoured musical representatives of Earth were Bach, Mozart, Stravinsky and Beethoven, a Blind Willie Johnson blues and Chuck Berry's Johnny B Goode. There were also recordings of people sending greetings in various different languages, which NASA uploaded to a Soundcloud account.