Heartwarming acts of kindness from the year in music

Any conversation about music in 2016 inevitably seemed to orbit around the rarified geniuses we lost. And with hard-fought political campaigns unfolding both at home and abroad frazzling our nerves and fraying our tempers, too, it's easy to forget some of the happier moments of the past 12 months.

While music itself can be a powerful healing force, sometimes the people involved in it - be they artists, fans or both - can be just as capable of spreading cheer. Here are nine of the most heartwarming acts of kindness from the music world this year.

1. Justin Bieber visits NHS choir that beat him to No.1

In 2015, Justin Bieber proved that some things are more important than Christmas chart success when he encouraged his fans to snub his own single Love Yourself in favour of buying The Lewisham and Greenwich NHS Choir's A Bridge Over You instead. "So for 1 week it's okay not to be #1," he tweeted. "Let's do the right thing & help them win. It's Christmas."

In March of this year, he went one better by making a surprise visit to the 30 choir members so he could present them with a trophy to commemorate their chart success (and to offer some sage wisdom, too: "Keep making smashers!"). Junior doctor and choir spokesperson Katie Rogerson said that by visiting, Bieber "acknowledged every single member of our hardworking NHS team across the UK. On a personal note… it gives me a bit of street cred with my paediatric patients as Dr Katie! I'm now a Belieber in every sense of the word!"

At first, DJ and promoter Jacob Husley thought the elderly couple he spotted in London nightclub Fabric had got lost and wandered in by accident. He was wrong: the pair, both in their late-70s, were on holiday from Warsaw, Poland and had booked tickets for the club's house and techno party WetYourSelf after reading positive reviews in a Polish newspaper.

"I was downstairs just opening and I saw her on her crutches going slowly down the stairs," Husley told the Metro. "I thought they were maybe relatives of someone from the club, but then I spoke to the people on the door and they said they had tickets. I ran down to welcome them to the club, I said, 'It's amazing you're here,' and gave them a drink. They had two tequila shots and she gave me a high five."

Husley served the couple tea in the club's VIP area and later saw them raving on the dancefloor until they asked for a taxi at 5am. The pair, who had been visiting their niece, sent Husley a thank-you letter, which praised the club for providing a "warm and cordial evening", describing it as "great fun", even if they weren't "big fans of techno".

One of the year's saddest stories was that of Viola Beach, the Warrington band who were tragically killed in a car accident, along with their manager, while on tour in Sweden. Among the many people moved by their story were Coldplay, who decided to pay tribute to the group during their headline slot at Glastonbury in June. At the point in their show where they had regularly been covering David Bowie's "Heroes", they instead played Viola Beach's song Boys That Sing, backed by footage of the group performing the track themselves.

It was intended, said Coldplay singer Chris Martin, "to create Viola Beach's alternative future for them and let them play Glastonbury for a song". He also told the crowd that the band "reminded us of us, and of all the other bands that come through here - the excitement and the joy and the hope". Two months later, members of the band's families compiled a debut album for them using live sessions and studio recordings. It gave Viola Beach a posthumous No.1.

4. Stranded Springsteen rescued by a group of bikers

The Boss may be born to run, but it seems his transportation isn't quite so trusty. In November, Bruce Springsteen found himself stranded in New Jersey when his motorbike broke down, leaving him to stick out his thumb in the hope of hitching a lift. Luckily for him, a group of bikers from the Freehold American Legion who were on their way back from a Veterans Day Event took pity on him. One of the wild bunch, Dan Barkalow, told the Associated Press: "Bikers gotta stick together. I stopped to see if he needed help and it was Bruce."

They weren't able to get his machine working again, so another member of the group, Ryan Bailey, invited Springsteen to strap his hands 'cross his engines and took him to a local bar. "It was nice to help out," said Bailey. "One Freehold person helping out another." Barkalow added: "We sat there and shot the breeze for a half hour, 45 minutes till his ride showed up. Nice guy, real down to earth. Just talked about motorcycles and his old Freehold days."

Beyoncé was one of 2016's most important, influential and inspiring voices, her art often shot through with powerful political statements: her controversial half-time show at the Super Bowl in February referenced the Black Panthers and Malcolm X, and her stunning Lemonade album mixed personal explorations of identity and infidelity with wider themes of empowerment and the Black Lives Matter movement.

But the planet's best pop star also had time to do some matchmaking. In September, she halted a show in St Louis to introduce her choreographer John Silver. Given his moment in the spotlight, he got down on one knee to propose to dancer Ashley Everett in front of thousands of screaming fans. And the song Beyoncé interrupted to allow Silver to ask for Everett's hand in marriage? Single Ladies (Put a Ring on It), of course.

6. Justin Hawkins is reunited with his long-lost cat 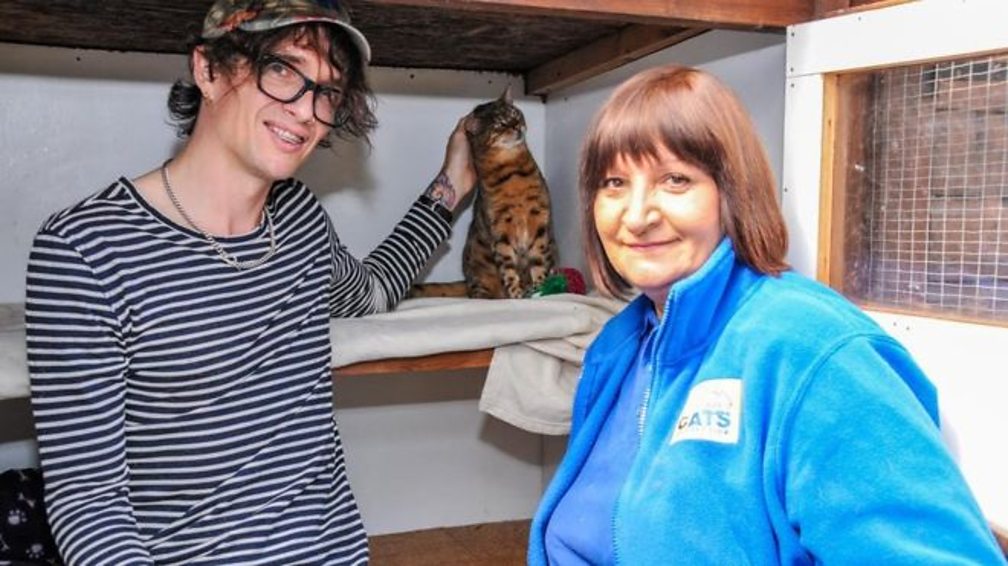 Proof that, if you truly believe in a thing called love, your faith will be rewarded. The Darkness's spandex-clad frontman Justin Hawkins had been left bereft when his 10-year-old pet Bengal cat, Cully, went missing three years ago. But even though the singer moved to Switzerland, he didn't give up hope that he'd find his long-lost mog. The pair were reunited in June when Cully was found living as a stray in Hawkins's former hometown of Lowestoft, Suffolk, and taken in by a cat welfare charity.

Hawkins, who was contacted by the organisation when they scanned Cully's microchip, took a break from the band's tour in order to pick up his pet, who now lives with him in Switzerland. "Losing Cully was heartbreaking for me and my family but I always knew in my heart that she was still alive - I could just feel it," he said. "She's always loved the great outdoors. I periodically checked in with the relevant databases and kept my details up-to-date because I knew this day would come."

An Emotional Surprise for an Orlando Survivor

In June, the world was horrified by a shooting in a gay nightclub in Orlando, Florida, when a gunman killed 49 people and wounded 53 others before being shot dead by police. One of the survivors of the Pulse shooting, Tony Marrero, made an appearance on Ellen DeGeneres's US chat show in September to talk about his experiences.

DeGeneres had a surprise for him: after Marrero spoke about how Katy Perry's track Rise had inspired him during his recovery period, DeGeneres brought out the pop star for him to meet. "I'm happy to be a joy, I'm happy to be a light, and I'm happy I could be there in my own little way to help you," said a visibly moved Perry, who also offered to pay for Marrero to attend the first year of his film school course. 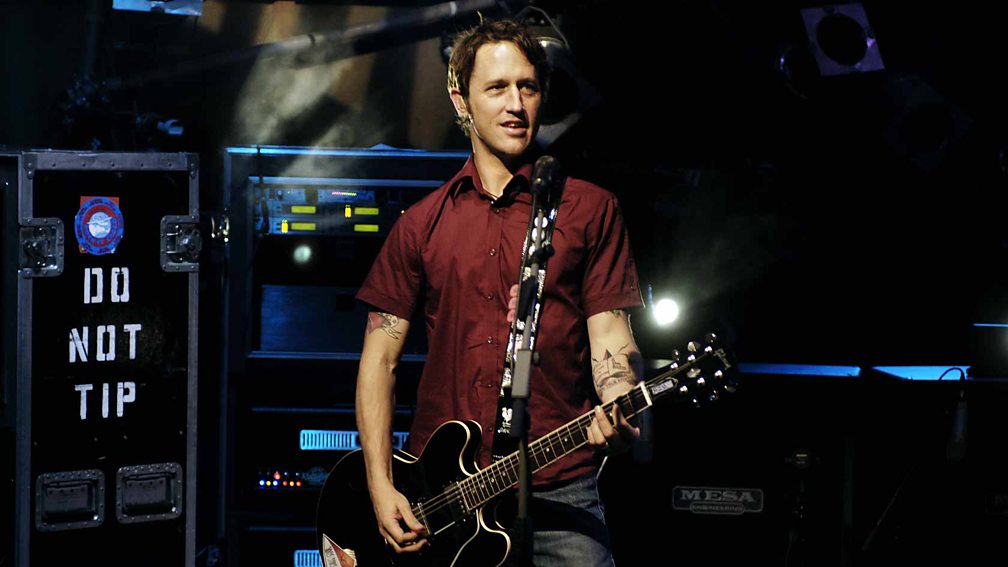 Foo Fighters frontman Dave Grohl is often hailed as the nicest man in rock, but one of his own bandmates gave him a run for his money earlier this year. In September, Leeds musician Sinclair Belle had his guitar - a white Chris Shiflett Telecaster Deluxe inspired by the Foos guitarist - stolen from his car. Details of the theft were posted online, but no one came forward with any information.

Eventually, Sinclair - who plays in Happy Daggers - was contacted by an unlikely interested party. "I was winding down from the week when a message came through the band's Facebook page," he told the Sun. "It was a message from Chris Shiflett. He had seen the article and [said] to let him know if I wanted another one: 'Hey Sinclair. I read about your guitar getting stolen. Bummer! I'd be happy to send you another. Nothing worse than getting your guitar ripped off.'" Sinclair thought it might be a hoax, but he was wrong: a few weeks later, a replacement Telecaster arrived in the post.

Despite being Britain's biggest pop star by an absolute mile, Adele had always been reluctant to play the UK's most historic festival. "I think I have made myself pretty clear on Glastonbury," she told Capital London in 2015. "The crowds are too big - I don't know if I could do it."

Yet less than a year later, she was holding court on the Pyramid Stage in front of 150,000-odd punters. Before her headline set, she'd told the BBC's Jo Whiley that she was inspired to play the festival by her son ("I think Glastonbury's going to be a big part of my kid's life so I wanted him to see me do it"), but it was her interaction with another young fan that provided the most memorable highlight. She chose 10-year-old fan Lyla at random to join her onstage for a down-to-earth chat which included Adele asking her if she wanted to pose for a selfie together and what her favourite colour was. Another fan wasn't quite so lucky: Maria, from Brazil, was also invited to join Adele onstage for a selfie, but got more than she bargained for after the singer accidentally burped in her face. "I had a dirty burger before I came on," she said by way of explanation.