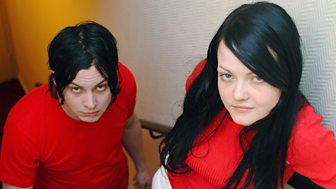 To paraphrase Rudyard Kipling, music is music and football is football, and never the twain shall meet. Except that never stopped Martin Kemp playing for Roy Race's Melchester Rovers, Mohamed Al-Fayed erecting a gaudy statue of Michael Jackson outside Craven Cottage, or Rod Stewart behaving like Rod Hull's Emu at the fifth round draw of the Scottish Cup earlier this year.

Football creeps into every area of life, which is why you shouldn't be surprised to find Jermaine Jenas on Question Time or Rihanna firing out brilliant tweets about the 2014 FIFA World Cup in Brazil.

We know many pop stars secretly harbour the desire to be footballers, but what about when they actually have a go at the punditry side of the game? Here are eight times musicians helped with the BBC's football coverage, and they're guaranteed to cause some cognitive dissonance.

The makers of the BBC Sport's Final Score perhaps didn't know what they'd let themselves in for when they invited The Fall's Mark E. Smith on the programme to read the results from the Videprinter. The intro to The Fall's Theme from Sparta F.C. provided the theme music of the show when he appeared in 2005 and, as it turned out, the Mancunian singer - sat next to customary presenter Tim Gudgin - was initially the model of decorum, reading the scores professionally, and only threatening to break into a titter once. What was so funny about Doncaster Rovers beating Bournemouth 4-2 we'll probably never find out.

And then Smith was interviewed by Ray Stubbs. "I want to ask you, Ray," interjected the veteran rocker, "why have you got a number-one haircut?" As the studio erupted into laughter precipitated by confusion, Smithy pressed the presenter further. "It's like what the murderers in Strangeways get. You looked like you've escaped from Strangeways. Serious!" 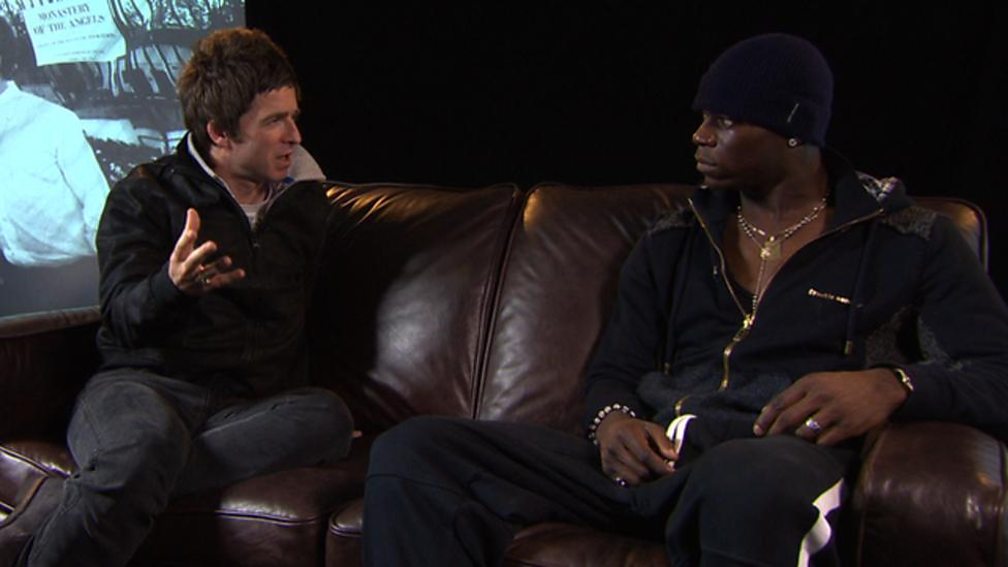 Ex-Oasis star Noel Gallagher turned Kirsty Gallagher when he was invited onto Football Focus to interview his hero Mario Balotelli, then of Manchester City. Noel and Mario discussed club manager at the time, Roberto Mancini, magic tricks and setting the curtains alight from playing with fireworks in the house.

Gallagher called the Italian striker the "poster boy for naughty children", adding, "My children love you and they don't even know who you are." He must have been heartbroken when Mario left City for Milan, and then spent a couple of unproductive seasons at rivals Liverpool, though the experience clearly didn't put him off interviewing high flying football luminaries; for City TV, Gallagher also filmed a tete-a-tete with manager Pep Guardiola, on the Spaniard's arrival at the club.

Lethal Bizzle and Match of the Day 2 watch an Arsenal game, 2013 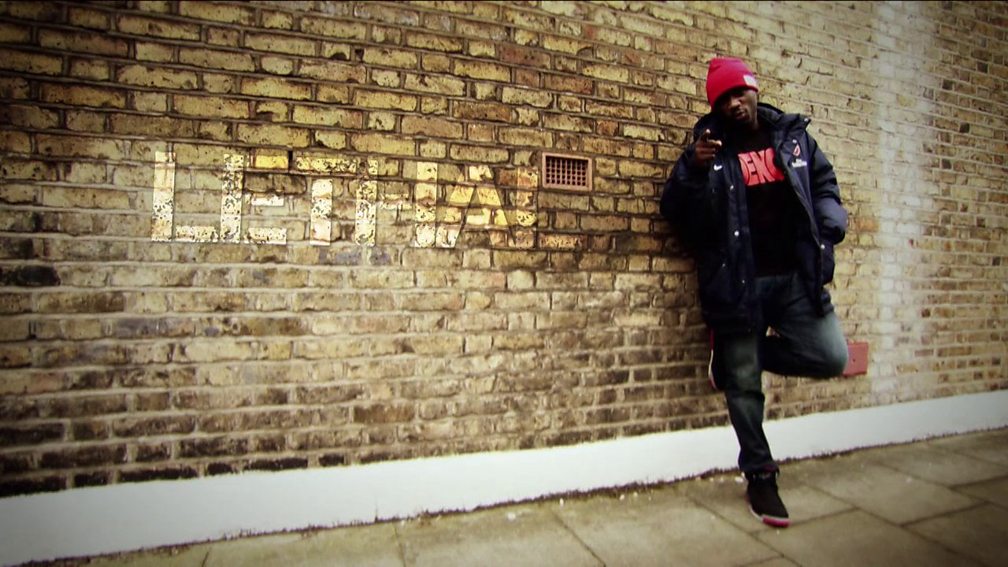 "Arsenal's been well dench this season," enthused Walthamstow rapper Lethal Bizzle in front of the Emirates stadium when he appeared on Match of the Day 2 in 2013, "even Giroud's been class." Cue a posse of Gunners fans singing the Frenchman's name to the tune of Hey Jude. The future was looking bright for Arsene Wenger's men back then, so much so that commentator Jonathan Pearce was allowed to get away with describing their form as "sick" in the short film made with the grime artist.

Fast forward three and a half years and Arsenal's form has been more dire than dench. The club are currently trailing Tottenham, their nearest North London rivals, and may miss out on the Champions League for the first time in two decades. Chances anyone will be dancing with mascot Gunnersaurus at the end of this season - like Bizzle does in the film - are looking more remote by the day.

There are many parallels between football and opera, including when the BBC chose Luciano Pavarotti singing Puccini's Nessun Dorma as the theme for its coverage of the 1990 FIFA World Cup in Italy. Ten years earlier, another of The Three Tenors, Placido Domingo, asked New Zealand soprano Dame Kiri Te Kanawa to make his dreams come true by introducing him to Kevin Keegan.

The Spanish tenor and Real Madrid fan got into the swing of things, teeing off a round of golf with the Dame, as newsreader Richard Baker looked on, dressed as John Motson. King Kev eventually showed up, and Domingo repaid him by hoofing a ball into the former Liverpool man's nether regions. A 20-something Tony Blair was somewhere taking note, and eliminating things not to do when a photo opportunity with an English footballing legend presents itself.

Reverend and The Makers' Jon McClure talks about the Owls, 2010

John McClure, better known by his sobriquet The Reverend, mainstay of Reverend and The Makers, is such a huge football fan that he managed to wangle being the first person outside of Sega to play the 2010 edition of Football Manager. The Rev, who says he picked up his moniker for being a "big mouth", has been known to wax lyrical about his beloved Sheffield Wednesday at any given opportunity. One of those opportunities presented itself last May, when McClure called up the BBC Radio Sheffield phone-in show Football Heaven to talk about the positive effect Thai businessman Dejphon Chansiri was having on the club, noting that it should follow Leicester City's model moving forward. Definitely one for the fans! 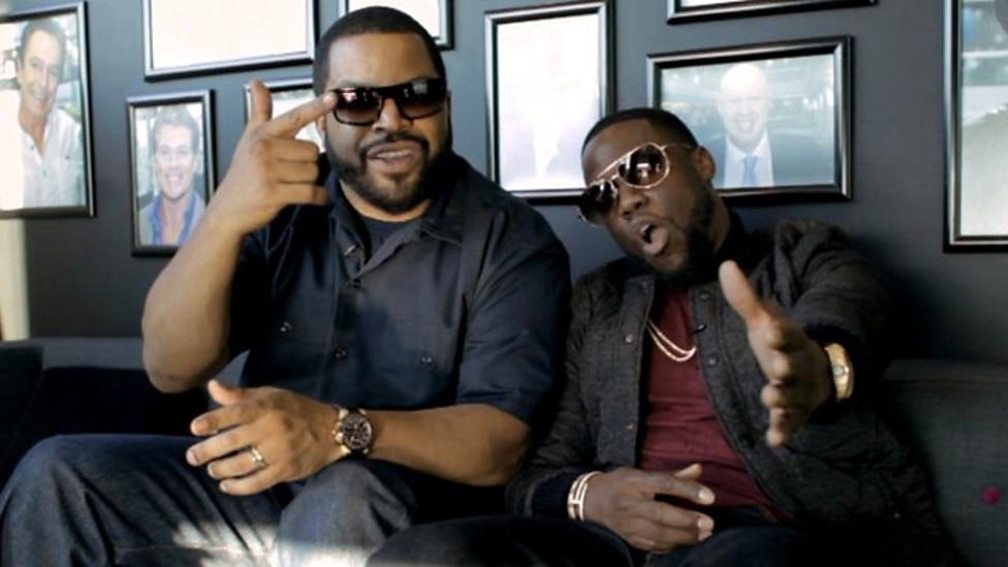 It was a good day when Ice Cube, along with his Ride Along co-star Kevin Hart, turned up on Football Focus to take on Mark Lawrenson's predictions. It was particularly strange to see the N.W.A rapper predicting a Midlands derby draw between West Brom and Aston Villa. Hart meanwhile, claimed to have been on Manchester City's books before his acting career kicked off.

Celebrities pit their wits against Lawro each week during the season, and past guests have included Robbie Williams, Katy B, Loyle Carner, Nicky Wire, Lethal Bizzle and many others. 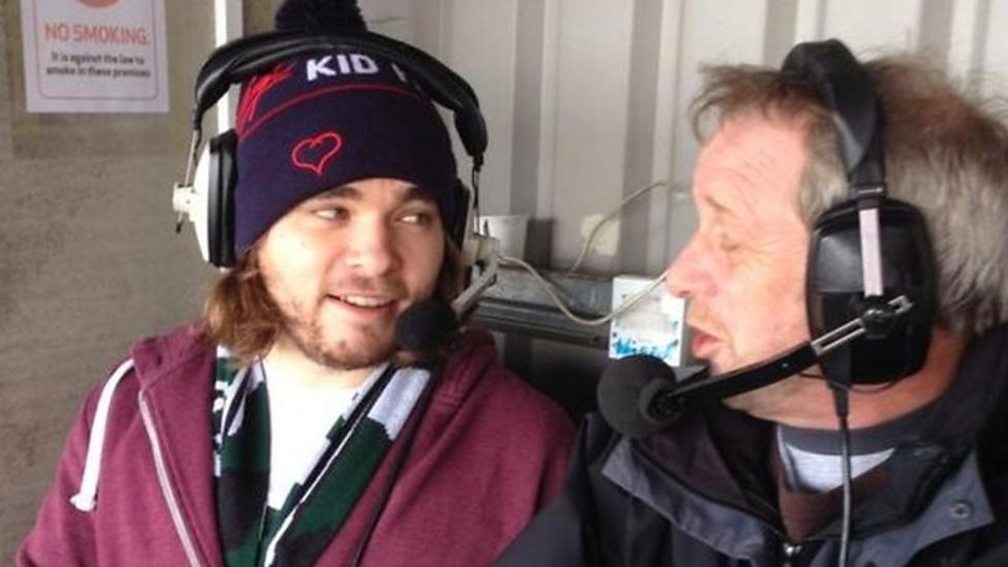 Bastille drummer Chris Wood, or Woody to friends and fans, got the opportunity of a lifetime in 2014 when he was asked to commentate on a Plymouth Argyle match on BBC Radio Devon. The Brit Award-winning drummer sat in on the Pilgrims' glamour-tie away fixture at Dagenham and Redbridge alongside much-loved regional broadcaster Gordon Sparks. Argyle, for the record, romped the Western Football League in 1905, and have the 2004 Football League Division Two title and the 1996 Third Division play-off final in the trophy cabinet. But don't accuse Woody of being a glory hunter, he's been Green Army since birth.

"Having grown up going to Argyle with my family since I was a young boy, I jumped at the chance to get involved with the team and the broadcasting legend Sir Gordon Sparks," said the West Country musician. "This will be a dream come true."

In 2007, the BBC was celebrating 80 years of broadcasting commentary. To mark the occasion, singer David Gray - a multi-million selling recording artist and one of the Old Trafford faithful - was invited onto BBC Five Live Sports Extra as summariser, presumably so he could Babylon and on. Given his obvious bias, famous former Arsenal goalkeeper and broadcaster Bob Wilson was also drafted in the interests of impartiality. "I have never done anything like this before," said Gray, "and I have no reason to believe I will be any good at it." Gray liked a kick around when he was younger, and was apparently very good with his head, which he become known for wobbling when he became a music star.