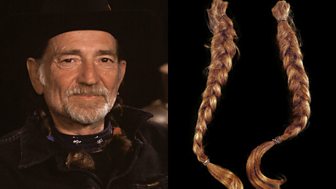 The prospect of having an artefact around the house that's worth a mint is a tantalising thought. And if you're sure you don't have a painting by a great master or half a dozen Fabergé eggs, perhaps you ought to have a rifle through your collection of pop culture memorabilia. These eight people did, and when they brought their findings to Antiques Roadshow, they delighted the show's experts...

This is quite a story - in 1963, a pupil at Stowe invited The Beatles to play at the boarding school, and they agreed. The entire paper trail of booking the band has been preserved, as the current headmaster explains to Paul Atterbury. The heads of the groups were made by sculptor David Wynne, a former pupil. And the value of the entire lot? Wow.

[WATCH] Two Clash t-shirts bought during a gig in Glasgow

Now, you wouldn't necessarily think that band t-shirts bought at a gig more than 30 years ago would be worth much today, but if that band is The Clash and you're a Glaswegian fan who's kept a pair in great condition, you might be in for a surprise. Expert Hilary Kay says they're made of "rubbish fabric", but they're collectable...

What a beauty - an American Slingerland Nighthhawk guitar made in the 1930s, bought in Wales and played, slide-style, by the father of its current owner. Marc Allum, a guitarist himself, is impressed by its quality, and gives it a four-figure valuation.

4. A letter from George Harrison

[WATCH] A letter to a fan, and a page of supposed Beatles autographs

"Dear Sandra, thanks for your letter," George Harrison's reply begins. Sandra fell in love with George after seeing The Beatles in Llandudno in 1963, so she wrote to him and received a fascinating response that was read out at her school assembly. Sandra also received the group's signatures with the letter, but are they genuine?

In this extraordinary clip, a mother tells the story of her son Colin, who was "Status Quo mad". At 18, he was paralysed from the chest down after a motorcycle accident and made this incredible tapesty by using his teeth to push the needles through the fabric. Tragically, he didn't get the chance to finish it before he died, aged 39.

How far would you go to meet your favourite band? This Rolling Stones fan scored her haul of photographs and autographs by going AWOL with a friend on a school trip to Paris in 1965. They were 14 and busted their way into the group's hotel by saying they were press!

Perhaps no diva has inspired more devotion than the Greek-American soprano Maria Callas, a post-World War II global superstar of opera. But this collector, Robert Sutherland, is more than just a fan - he's a pianist who toured with Callas as her accompanist for a year and a half. Robert tells Clive Farahar of his very personal memorabilia, including annotated sheet music. Not surprisingly, his lot is worth a pretty penny, and this is just a fragment of his collection.

8. A meeting with The Beatles in Australia

The daughter of the former Lord Mayor of Melbourne tells of the day The Beatles were invited to a reception at the city's town hall. "I was given John Lennon to look after and he was wearing a leather jacket," she explains, "and I'd never touched a man in a leather jacket before." She got the invitation signed by the band members, which turned out to be a very sound investment...