Top of the Pops a decade on: 10 stunning moments from the legendary pop show

It's been 10 years since the weekly Top of the Pops called it a day. At its peak, it was a TV show that could take viewers on a strange and fascinating journey through seven days in the pop charts, giving equal weight to thrilling, credible new performers, reigning pop monarchs, smiling family favourites and preposterous novelty nonsense. Sometimes cheesy, thrillingly inconsistent and relentlessly upbeat, Top of the Pops did not care what music lovers were supposed to like, it merely showed what they did like, book-ending each performance with a shower of canned applause.

This even-handed approach - and a prime-time TV slot - meant that performers could genuinely surprise viewers. You could have been expecting Westlife, but you end up with Eminem. You may have tuned in for Racey and found yourself watching Can, tea dribbling down your chin in disbelief.

Here, then, is a Top 10 of stunning moments - literally, the top of the pops of Top of the Pops: 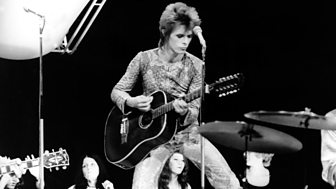 The People's Playlist: "Who is this pervert?"

This is by some distance the most influential and highly regarded moment in Top of the Pops history, even more so than The Goodies performing The Funky Gibbon. Although David Bowie been on the show before, and had recently aired his Ziggy Stardust persona on The Old Grey Whistle Test, this was the first glimpse the general public had of Bowie's alien physique and camp demeanour, and the sheer otherness of his performance lit a fire in a generation that wanted something more out of pop music than, say, Little Willy by The Sweet (which was also on that week's show). This clip has proved so popular that there is even a Facebook group devoted to finding out the identity of the boy in the tank top, dancing behind Bowie.

The People's Playlist: "Who is this pervert?"

[LISTEN] Numan fan Rob Puricelli on how 'Are 'Friends' Electric?' changed his life

In 1979, the shape of music was still widely considered to be something you did with guitars. There were synth bands, like The Human League, who had been inspired by Kraftwerk and Donna Summer's I Feel Love (and the Doctor Who theme), but they were widely considered a left-field aberration from the norm. Then along comes a whey-faced Bowie fan called Gary, with robotic nostrils for a voice, dragging a synthesizer behind him and singing an astonishingly cold song about alienation. As Rob Puricelli reveals, speaking on Stuart Maconie's The People's Songs, the impact of that monolithic synth refrain was immediate and life-changing.

In 1978, there was a lot going on in music. Disco, post-punk, new wave and reggae acts competed for attention with the cast of Grease and leftover rock 'n' roll revivalists like Showaddywaddy. But even among this rowdy gang of show-offs, Kate Bush stood out as being entirely unique. She was just 20 years old, and arrived on the Top of the Pops stage confidently singing a bewitchingly odd song based on a classic of gothic literature in a deliberately shrill vocal register that made no effort to warm the listener (she was pretending to be a ghost, after all).

Ten years after Bowie's landmark appearance, the living rooms of Britain were treated to a second moment of gender confusion, as the carefully named Boy George stepped out in full androgynous glory to perform Culture Club's first hit. But, unlike Bowie, there was nothing sexually challenging about his appearance. His clothes were loose and baggy, his make-up an immaculate mask, his song raw and vulnerable. He didn't throw an arm around his guitarist or pout. This wasn't about lust, it was about identity. And the immediate reaction was one of confusion and disbelief, as mainstream TV viewers asked themselves exactly who (they may have used the word "what") they had just seen.

This is one of those things that makes less sense now than it did at the time. In an attempt to feature hit records by acts for whom there was no footage and no chance of a live performance, Top of the Pops brought in specialist dance troupes The Go-Jos, Ruby Flipper, Legs & Co, Zoo and most famously Pan's People. They would have to interpret any song from the full range of the hit parade in a visually arresting (and charmingly literal) fashion, and as the former members of the troupe told BBC Breakfast, that meant a certain degree of 'sexiness', to try and make sure no one changed the channel.

Punk had a slightly fractious relationship with Top of the Pops, with The Clash refusing to appear and Sex Pistols having to be pre-record alone in the studio in case they inadvertently started a riot. But most of the key players in the British punk explosion ended up appearing on the show. This clip of The Stranglers captures a lot of this tension, in that JJ Burnell spends a good deal of the first minute contemptuously wafting the dry ice off the stage leaving Hugh Cornwell to deliberately mess up the miming of his guitar solo. Pesky hooligans.

It has long been considered a weakness of Top of the Pops that bands would be asked to mime to their own records on the show. In fact, the story was more complicated than that, with some mimed performances having a far greater impact than, say, live vocals over backing tracks, full live performances or even that strange period during which arcane Musician's Union rules forced some acts to re-record their latest hit in an afternoon and mime to that. New Order notoriously turned in a poor account of their imperial masterpiece Blue Monday, which, in total contravention of pop law, went down the charts immediately after being showcased on the nation's favourite music show.

It's hard to credit now, but as burgeoning hip hop culture was breaking through in the early 1980s, it was considered legitimate to film one man dancing to his band's record, because he was able to show off some of the key moves in the startlingly new body-popping craze. Jeffrey Daniel of Shalamar was that man, and amid all the popping and locking, he caused a stir by appearing to walk backwards during his performance. This was a move he called the backslide, but of course we now know it as the moonwalk, thanks to Michael Jackson taking it up a year later.

This performance is both heroic and preposterous. Heroic because here's Primal Scream finally shedding their indie caterpillar skin, leaving behind the trappings of their own record collections and becoming a properly great band, and preposterous because they're all dancing to the music in their own heads, oblivious to the cameras. Bobby Gillespie's knock-kneed grooving is particularly distracting, and, given that he has one line in the whole song, his mouth seems disturbingly unresponsive, too. And yet, it's entirely compelling. Oh, and yes, that is Mark Gardener of Ride on the keyboards.

In the history of spitting out your dinner while watching Top of the Pops, this probably caused more than a few interrupted mouthfuls. Manic Street Preachers at their flinty Holy Bible best, in army fatigues, with James Dean Bradfield belting out the song's nihilistically narcissist lyrics - "I am an architect / They call me a butcher" - and Vic Reeves and Bob Mortimer jigging about in the audience. If you're unsure which one James is, check for the balaclava with his name written on it. That single item of clothing - widely (and wrongly) interpreted as a gesture of support for the IRA - lead to over 25,000 complaints.