There are thousands upon thousands of fabulous photographs and contact sheets of pop icons and spiffing former BBC employees at work on music residing in the BBC archives, many never seen before. Here is just a tiny sample, dug up for no reason other that they're incredible shots covering almost 100 years in time.

We present them with a hat tipped fondly in the direction of the Reddit subreddit OldSchoolCool: History's cool kids, looking fantastic. (The BBC is not responsible for the content of external websites.) 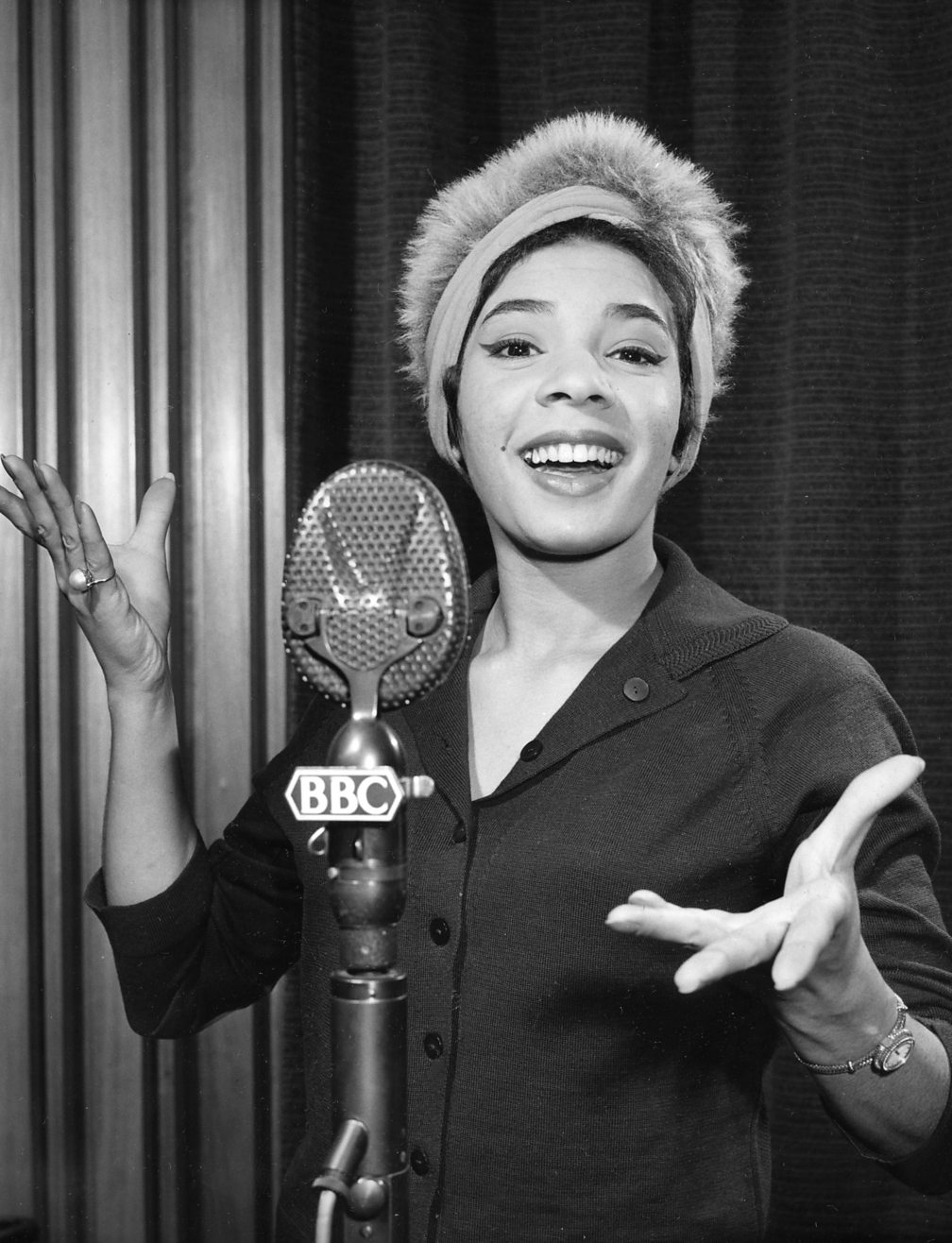 Shirley Bassey at the BBC in 1960, the year when she became a star. Her recording of As Long As He Needs Me from Lionel Bart's Oliver! was a No.2 hit and stayed in the charts for 30 weeks. She also made her American television debut in 1960, performing on The Ed Sullivan Show, but Goldfinger was still four years away. 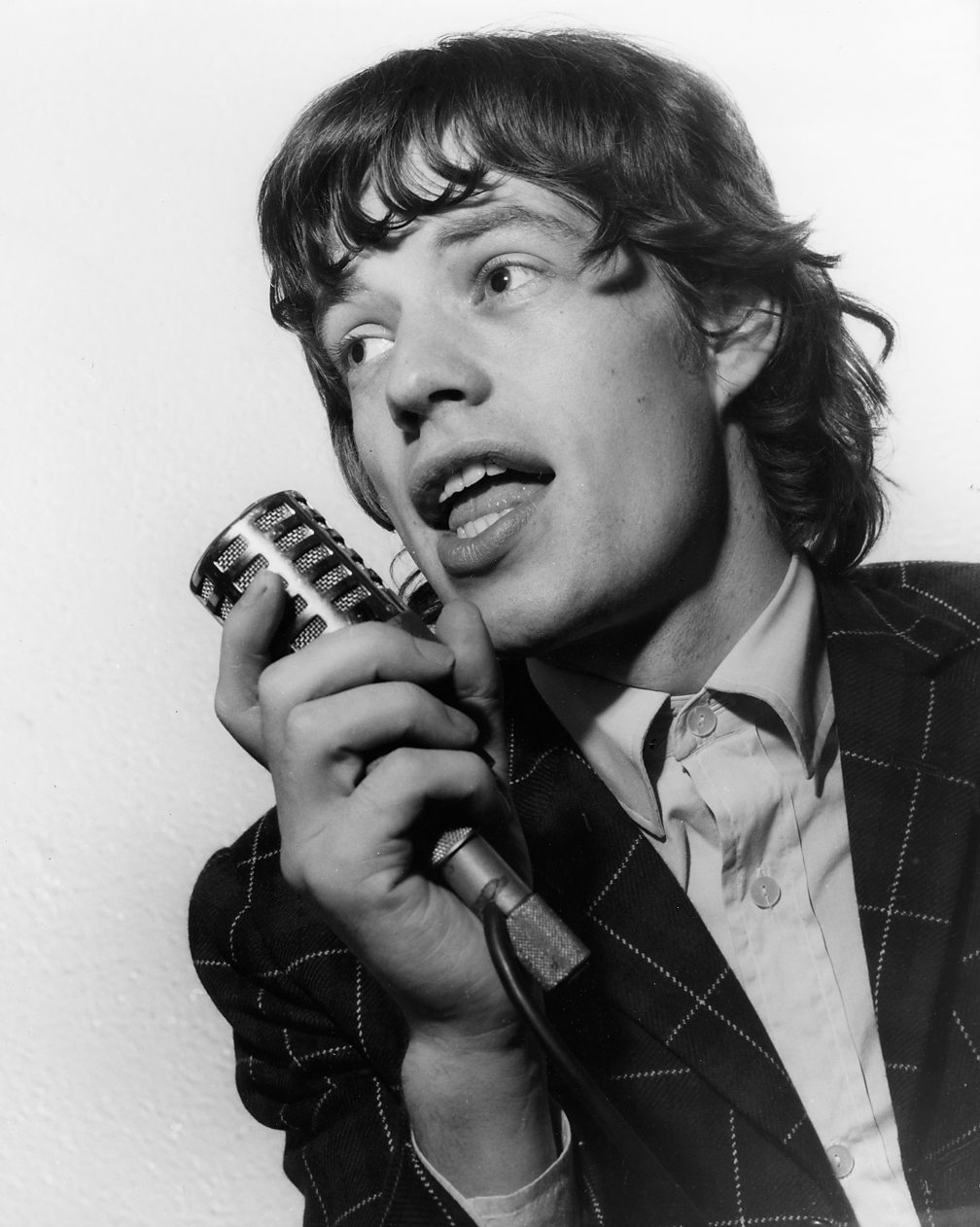 Mick Jagger, probably photographed backstage at Top of the Pops just as The Rolling Stones were blowing up in the UK. The group released a staggering nine singles in 1964, including two No.1s - It's All Over Now and Little Red Rooster - but it wasn't until 1965 that they cracked America with (I Can't Get No) Satisfaction, their first US chart-topper. 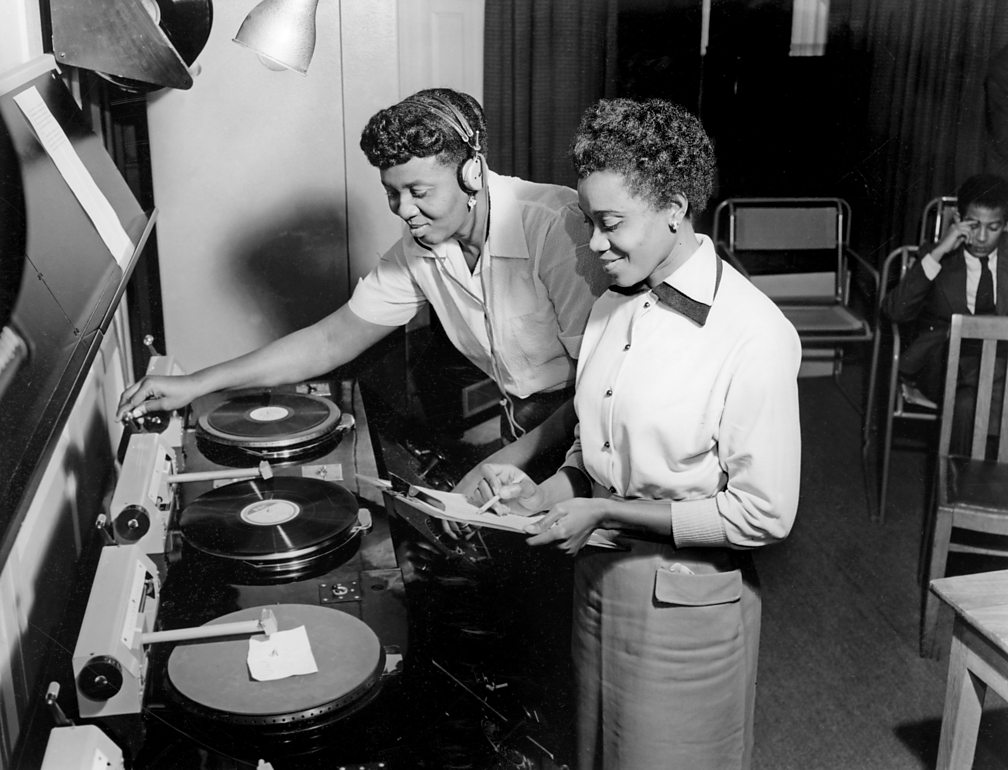 This picture is credited in the archive as showing "Mrs Laryea and Miss Tamakloe from the Gold Coast rehearsing gramophone effects for the students' final production". 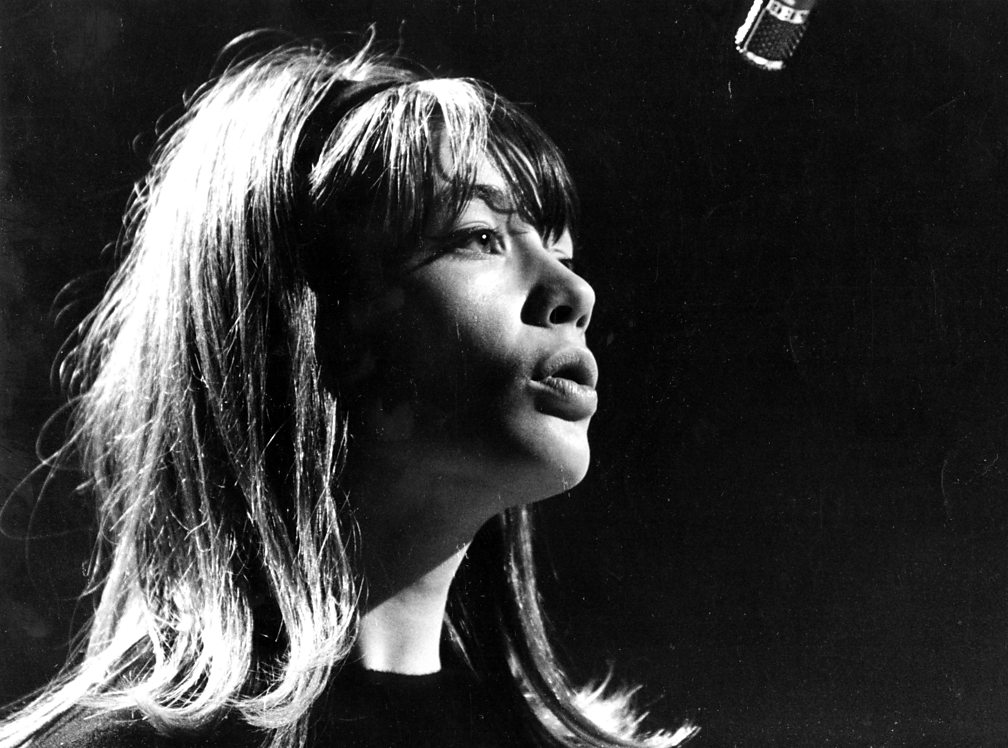 The iconic French singer-songwriter Françoise Hardy in 1963, representing Monaco in the Eurovision Song Contest. Over 50 million people at home and abroad in 16 countries linked to London for the finals of the contest, televised on Saturday 23 March from BBC Television Centre. 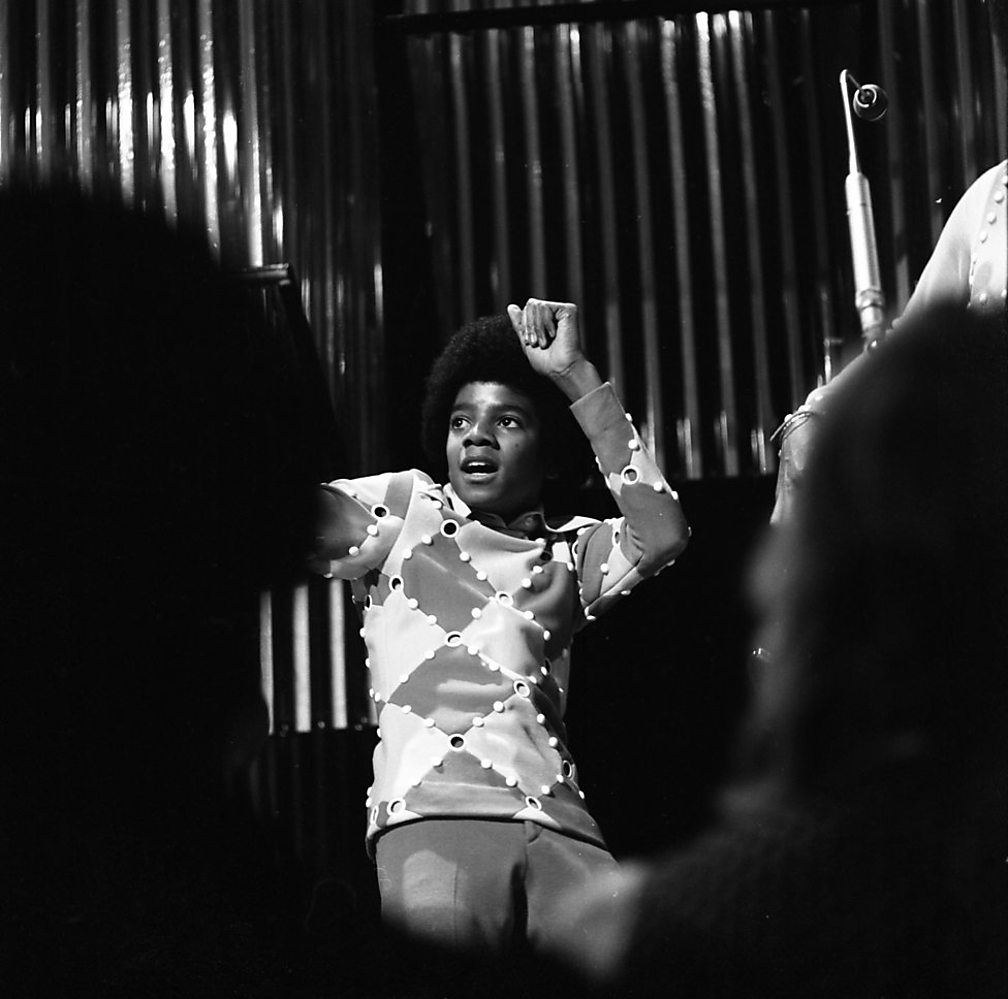 A fantastic shot of Michael Jackson on Top of the Pops, aged 14. The Jackson 5 appeared on the Christmas special in 1972, performing Rockin' Robin, which had been released as a Michael song from his debut album, Got to Be There. This was the year Michael became established as a solo artist; it was also the last time he appeared in person on the show. 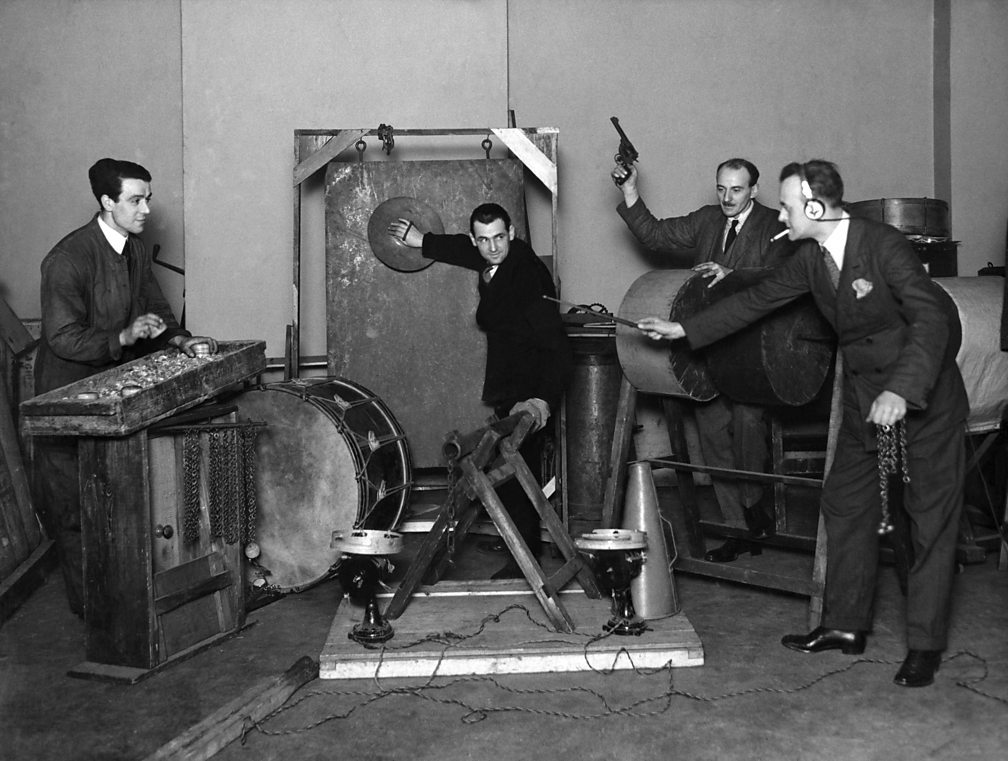 Four unidentified sound effects workers making effects for a programme in studio, March 1927, 31 years before the creation of the BBC Radiophonic Workshop. 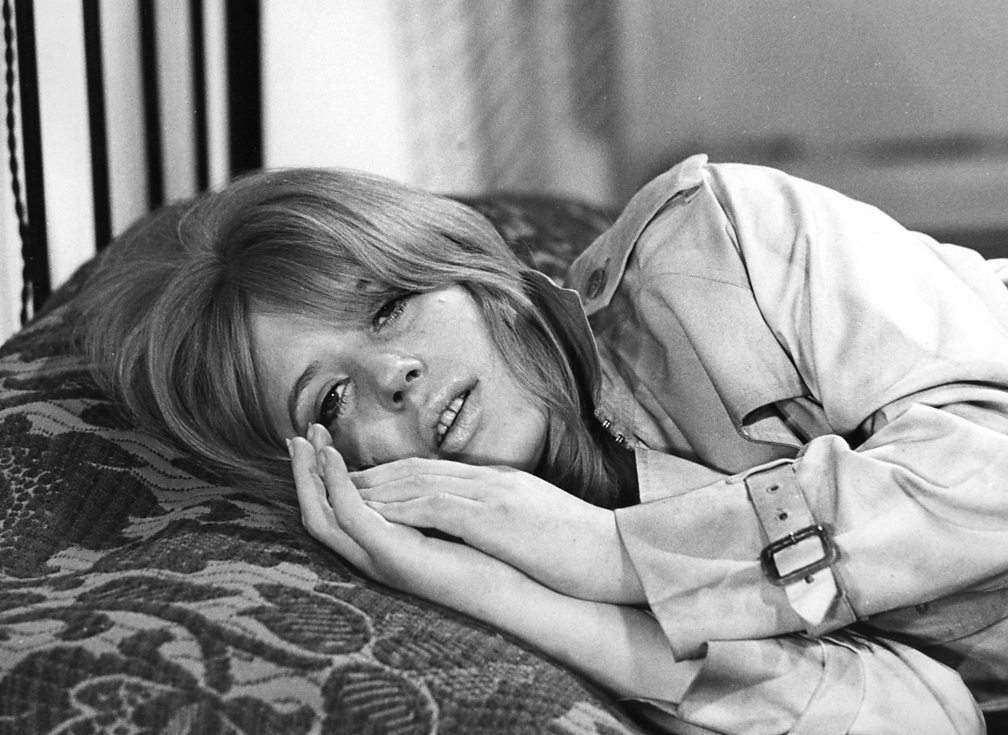 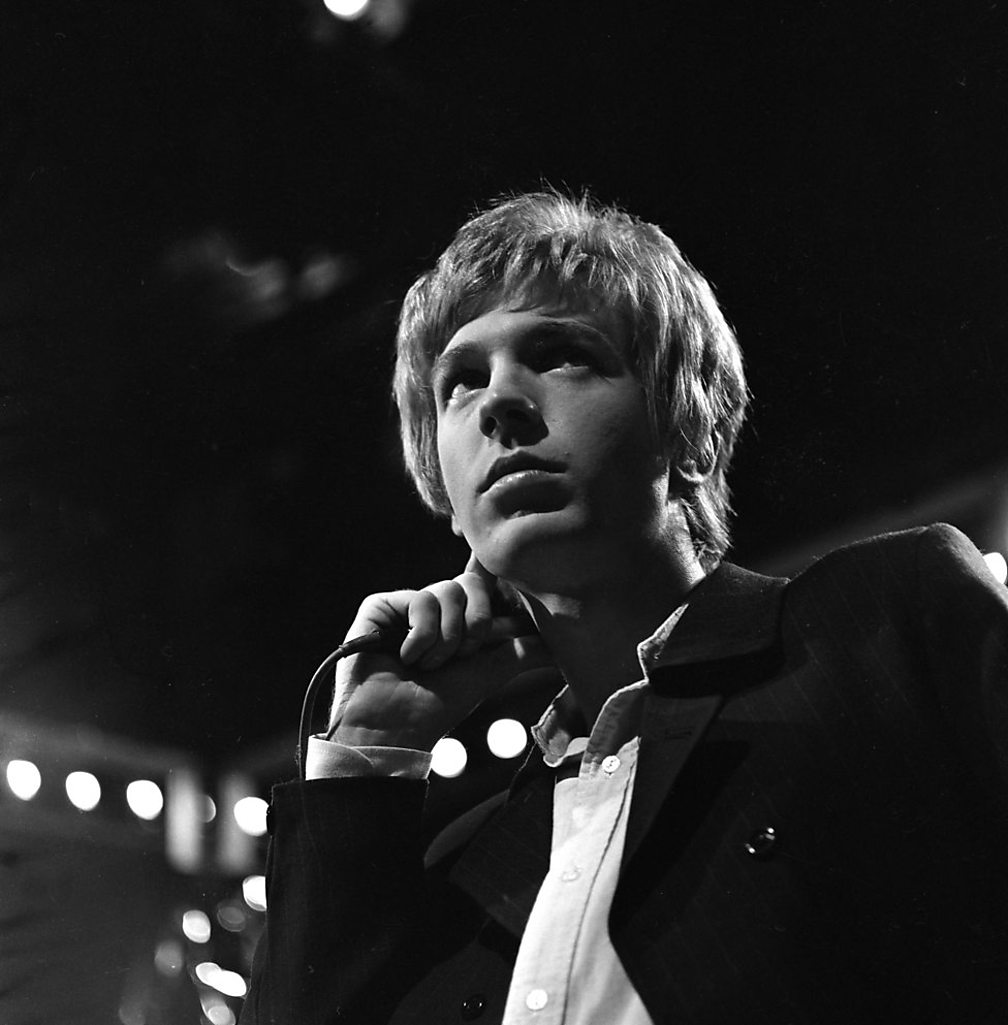 Scott Walker made his Top of the Pops debut as a Walker Brother in 1965 and also performed in 1968 as a solo artist, which is possibly when this shot is from. His run of albums in the late 60s are among the finest in pop, and were a key influence on David Bowie. Scott is still very much around today releasing ground-breaking avant-garde music. 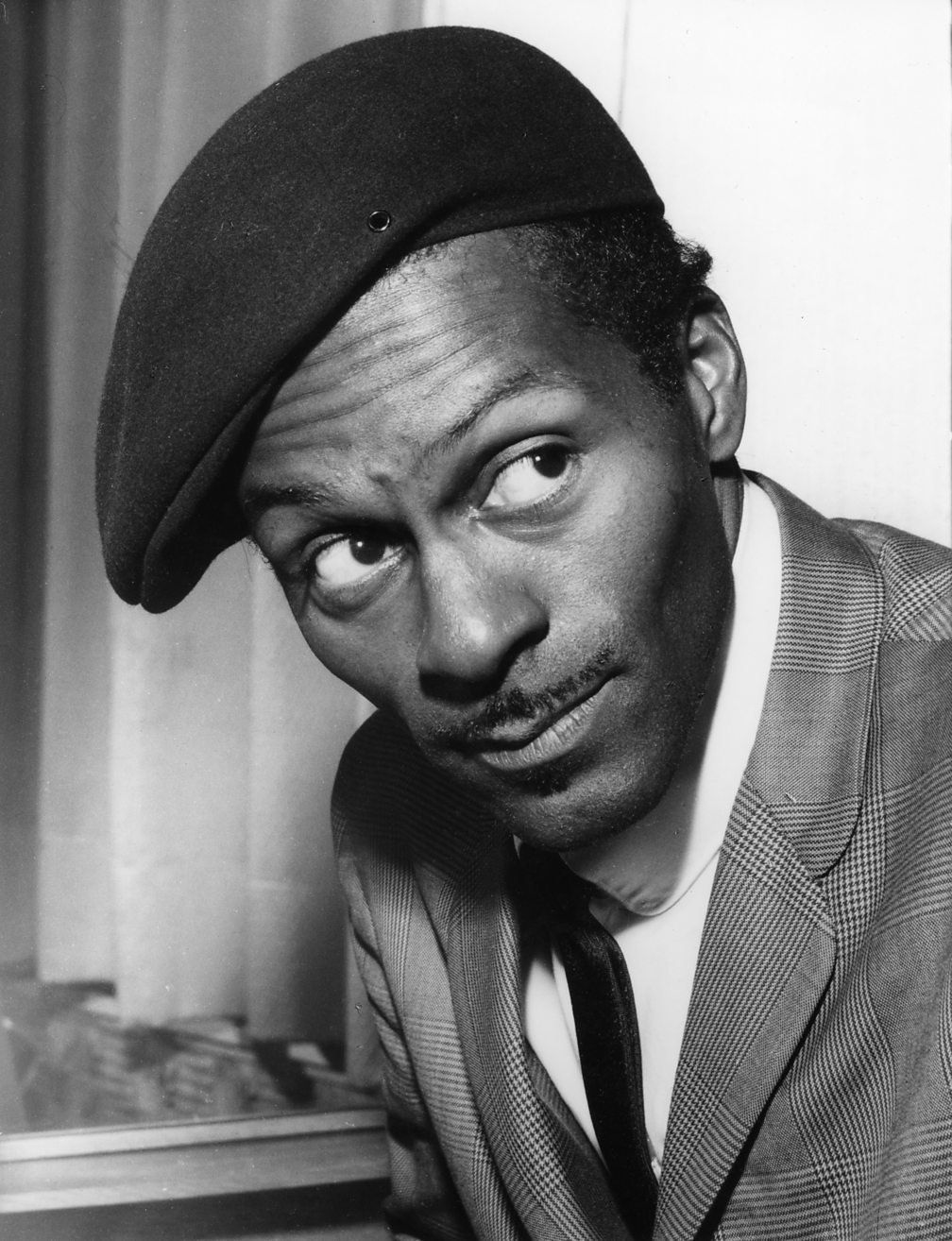 Chuck Berry in 1964, just when he was making a comeback after spending 20 months in prison. An album he released that year, St. Louis to Liverpool, is one of his best (it contains No Particular Place to Go and You Never Can Tell) and it specifically sought to capitalise on the huge influence he'd had on British Invasion bands. 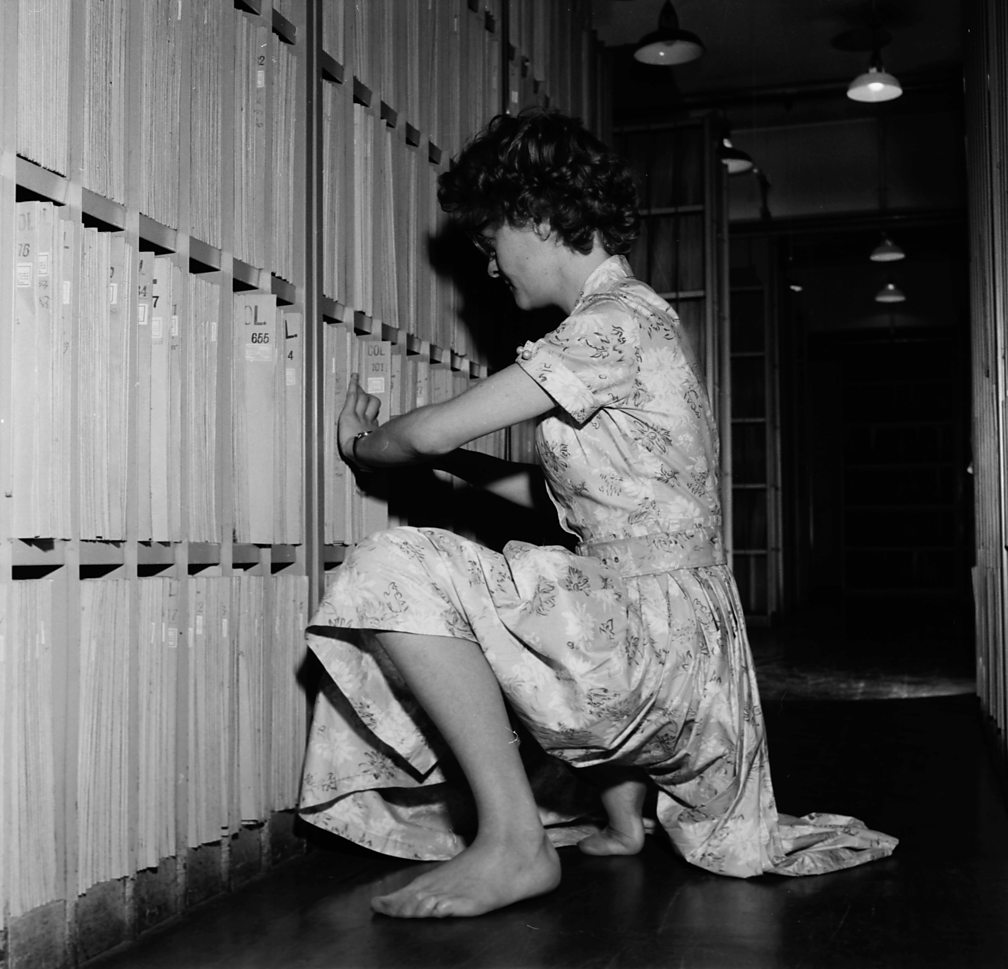 Removing a record from the racks at the BBC Gramophone Library in 1959, barefooted, and actually under some duress. The image is taken from a programme called Exhibition Choice, presented by Eamonn Andrews at the National Radio Show at Earls Court. Andrews talked to visitors and challenged Gramophone Library employees to find their choice in record time. 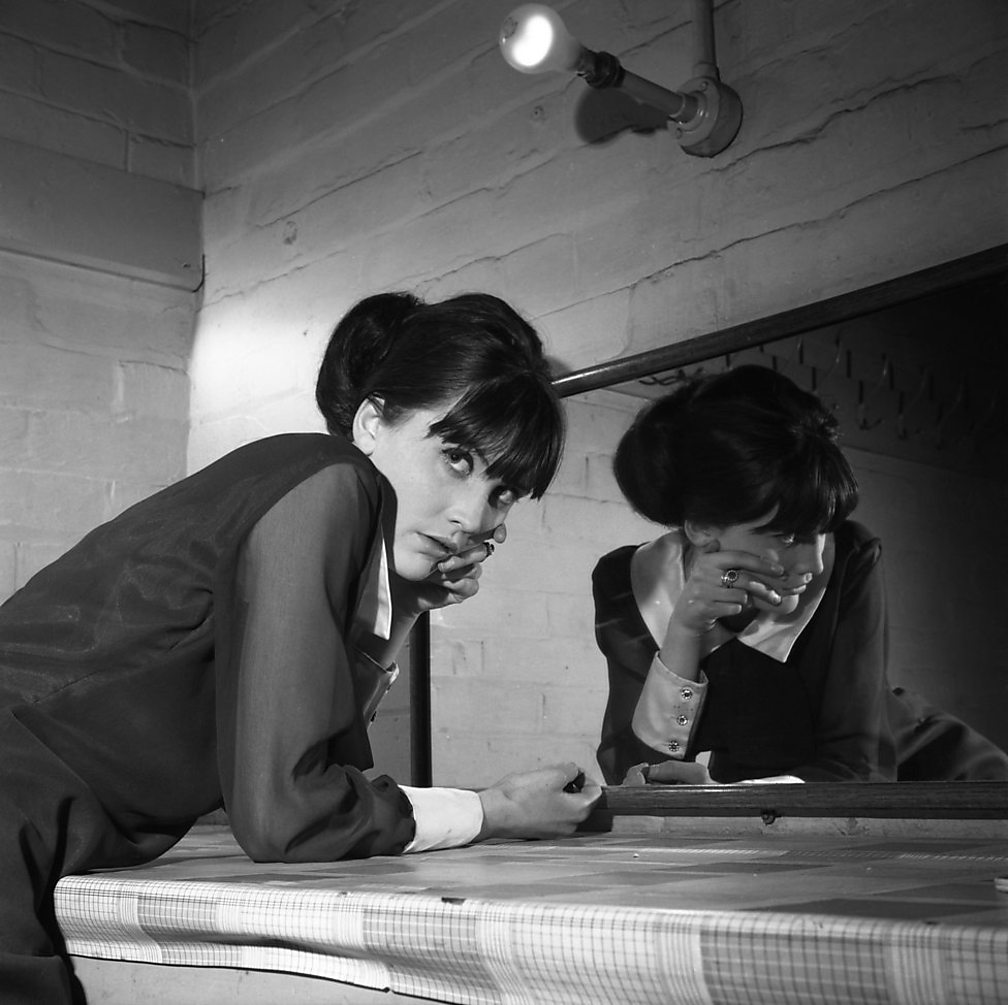 Also known for going barefoot, here's Sandie Shaw. It's from backstage at Top of the Pops in the mid-60s. Sandie was a mainstay on the show throughout the decade and one of our biggest pop stars. In 1967, she became first British act to win the Eurovision Song Contest, with Puppet on a String. 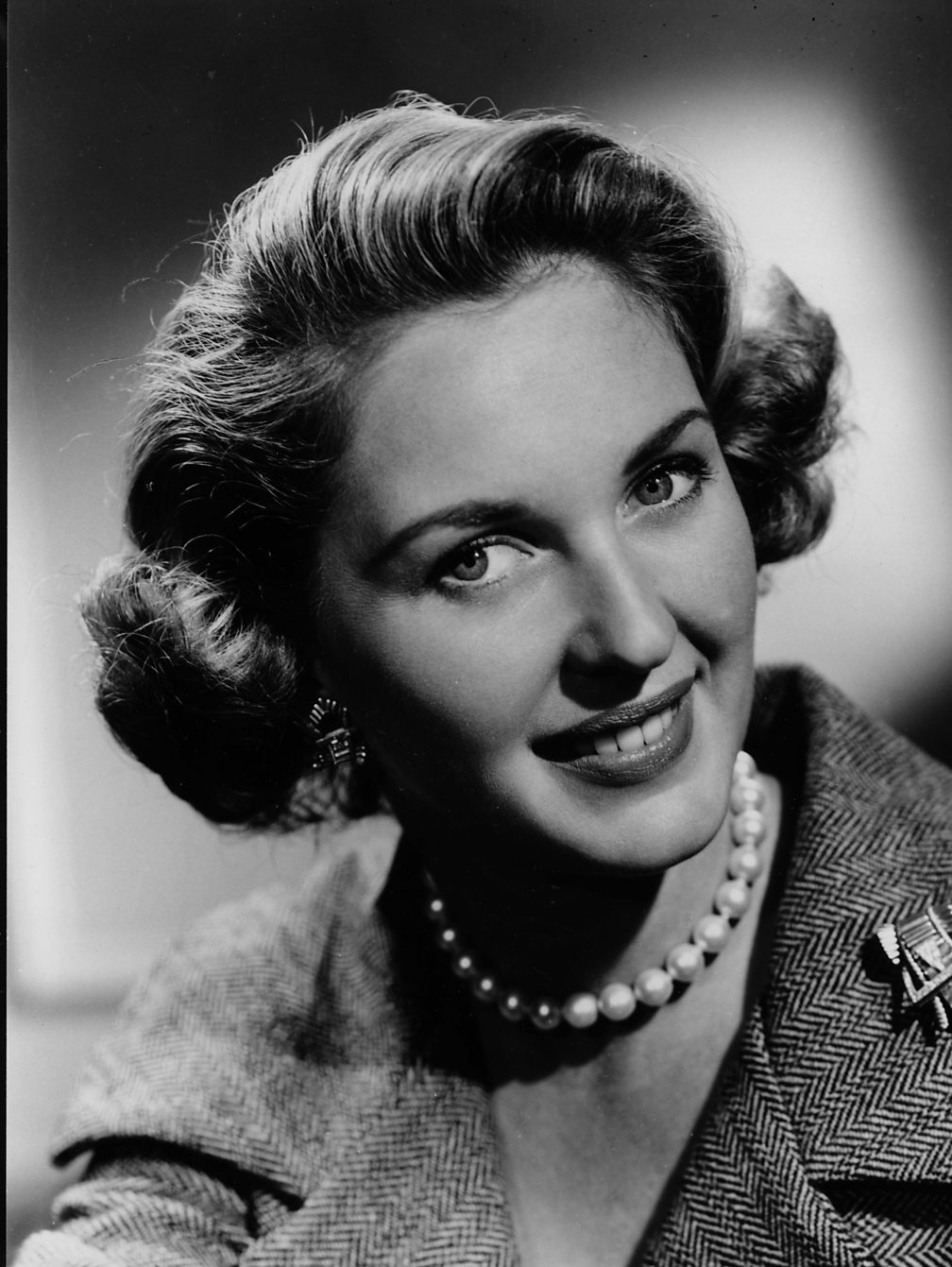 Sticking with Eurovision, this gorgeous promo shot is of Katie Boyle, captioned in the archive as: "Catherine Boyle, the lovely actress who will introduce the Eurovision Song Contest Grand Prix 1960." Boyle presented the contest in 1960, 1963, 1968 and 1974 when the event was hosted in the UK, and was also known to BBC audiences as a presenter on panel show What's My Line? She turns 90 next month. 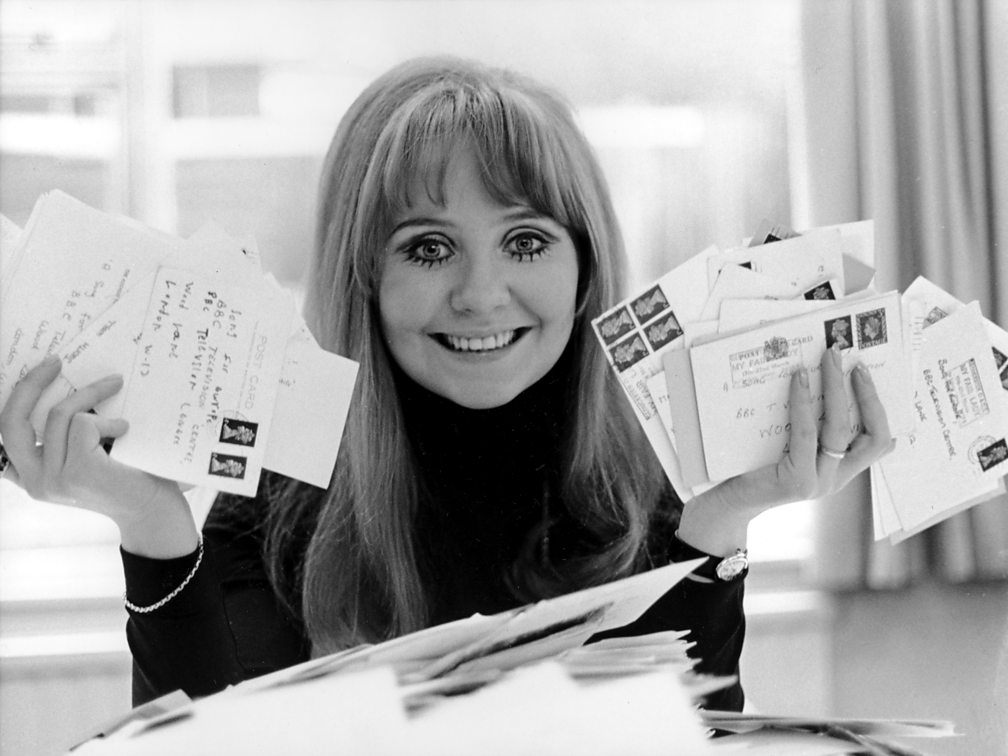 Lulu counting votes sent in by viewers to decide Britain's entry for the Eurovision Song Contest 1969, which was due to held in Madrid that March. Her song, Boom Bang-a-Bang, written by Peter Warne and Alan Moorhouse, was chosen and it won the contest. She later told John Peel: "I know it's a rotten song, but I won, so who cares?" 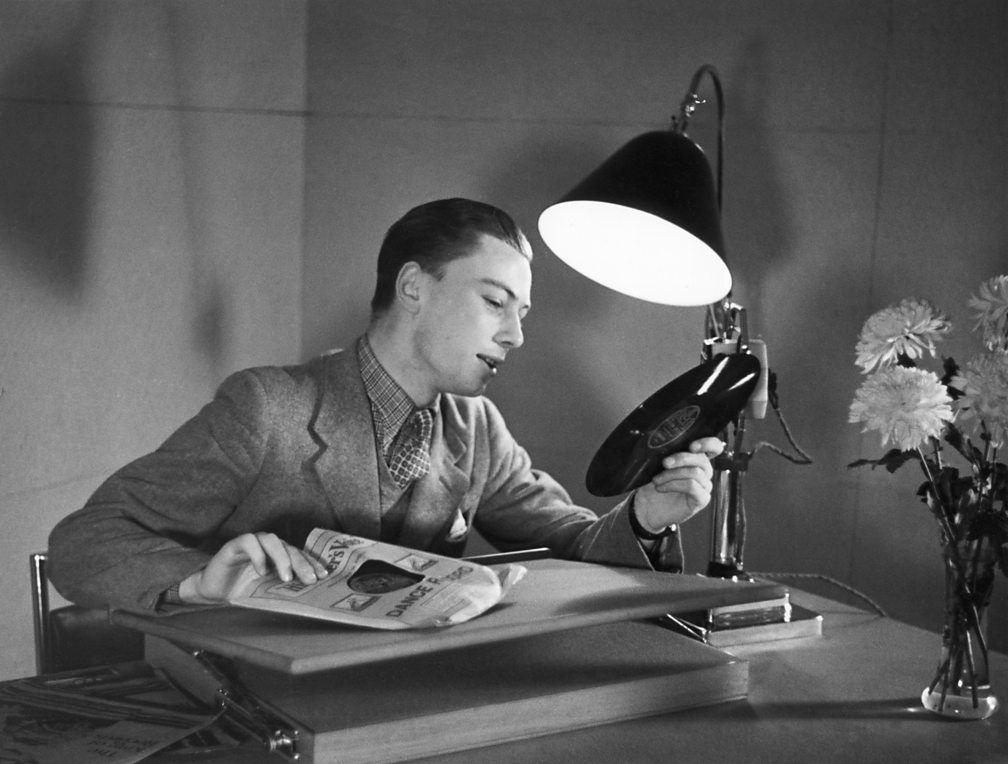 Presenter Raymond Burrs playing jazz records. There's not much information on Burrs in the archive, but we do know this is shot is from BBC Newcastle, 1935. 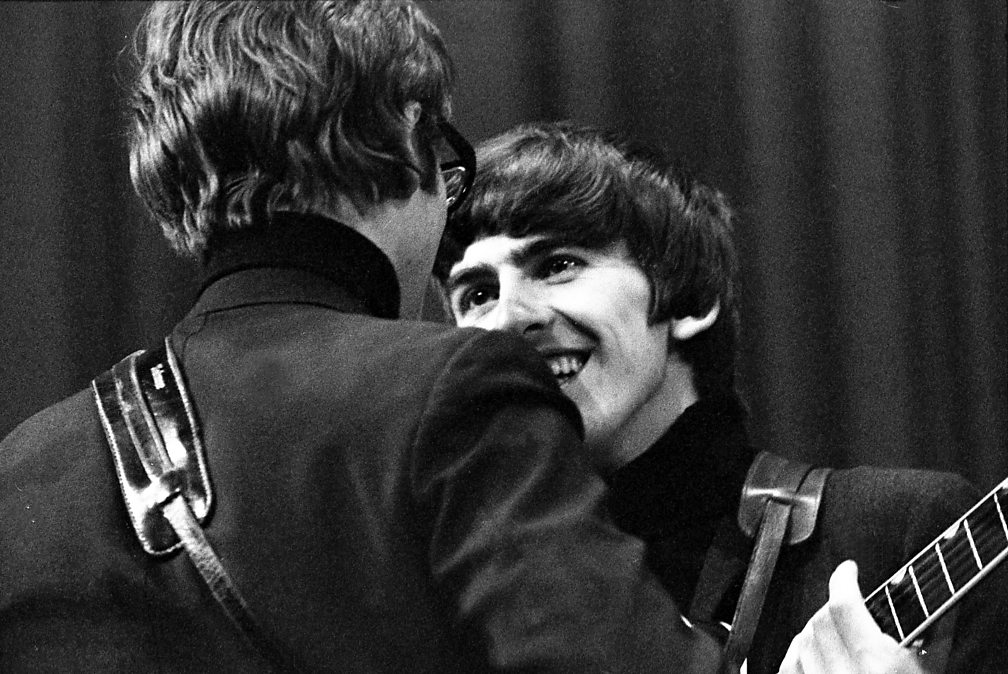 George staring at John, and grinning, when The Beatles appeared on the Saturday Club, December 1963. Saturday Club was broadcast on the Light Programme station, and later Radio 1, between 1957 and 1969, and was one of the earliest BBC programmes to play pop music. Top of the Pops launched in 1964. 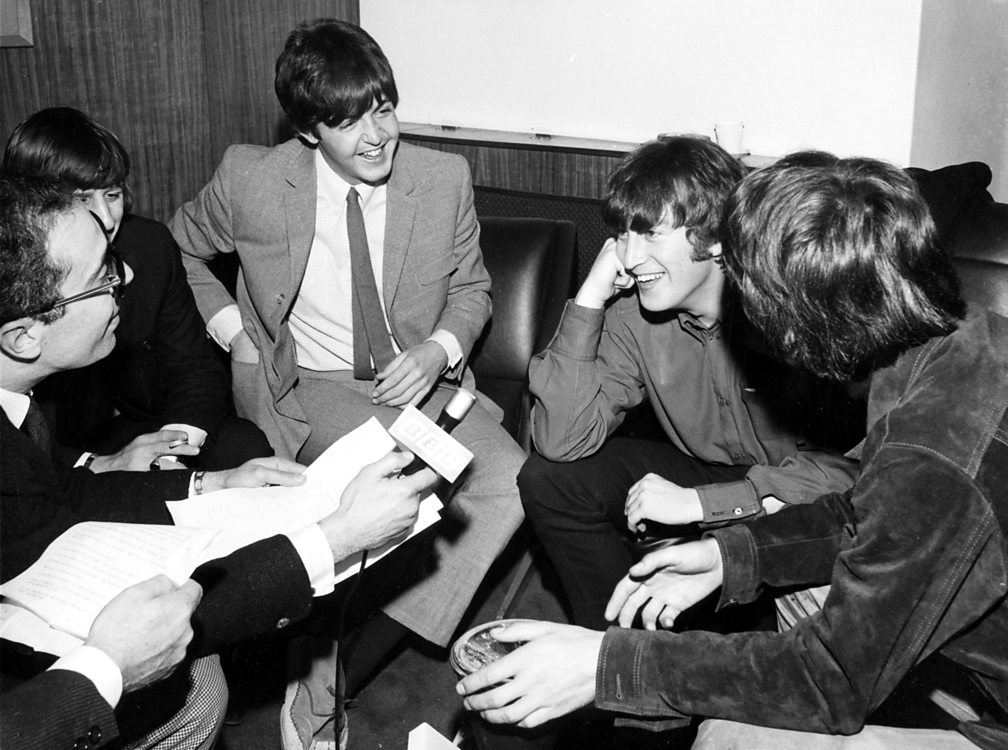 The Fab Four being interviewed by Sergio Gazzarrini of the BBC Italian Service before leaving London to give some performances in Milan, Genoa and Rome, June 1965. 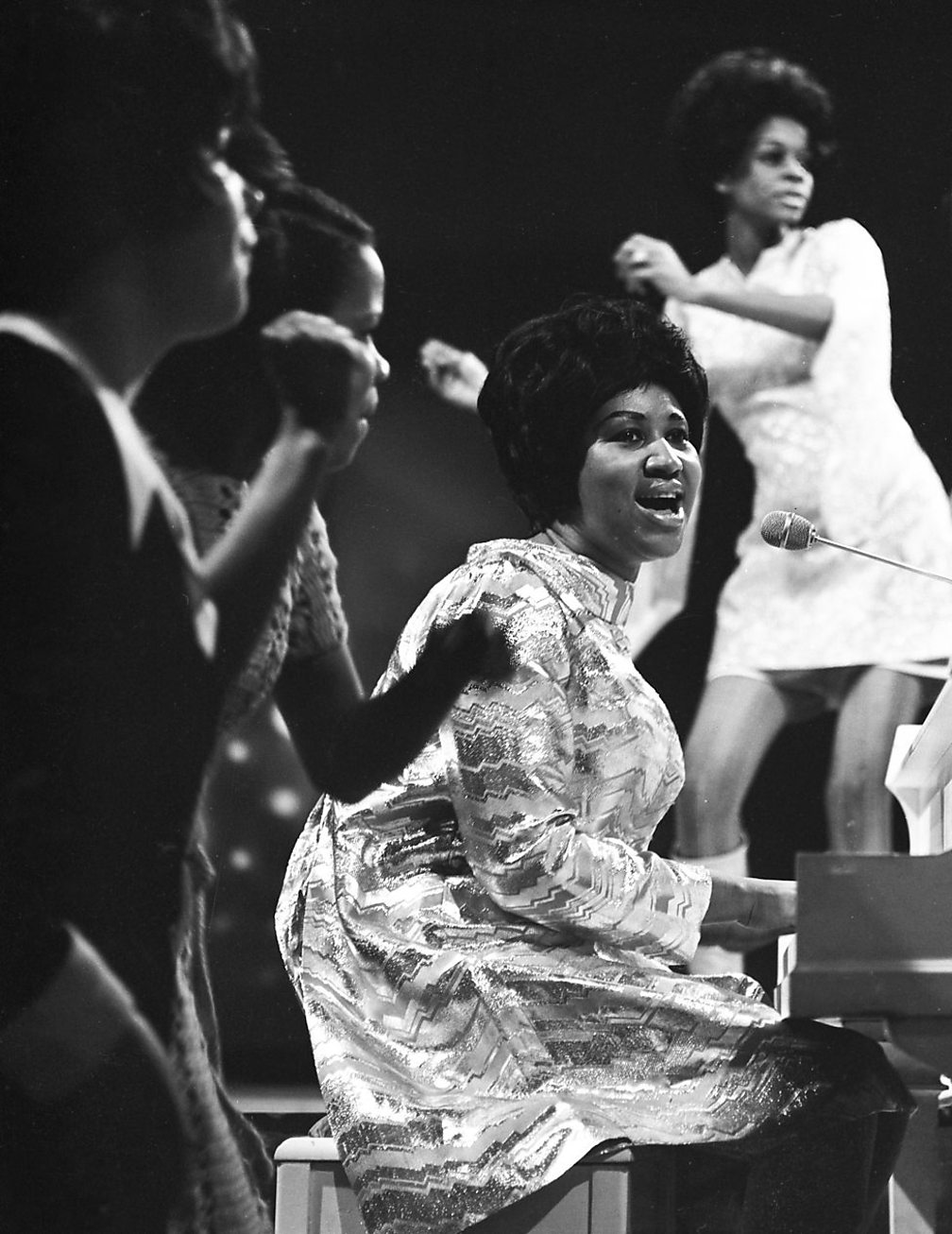 Aretha Franklin first appeared on Top of the Pops in 1968, playing I Say a Little Prayer and we're presuming this shot is of that performance. Originally written by Burt Bacharach and Hal David for Dionne Warwick, the song was taken from Franklin's 1968 album, Aretha Now, and became her first UK hit. 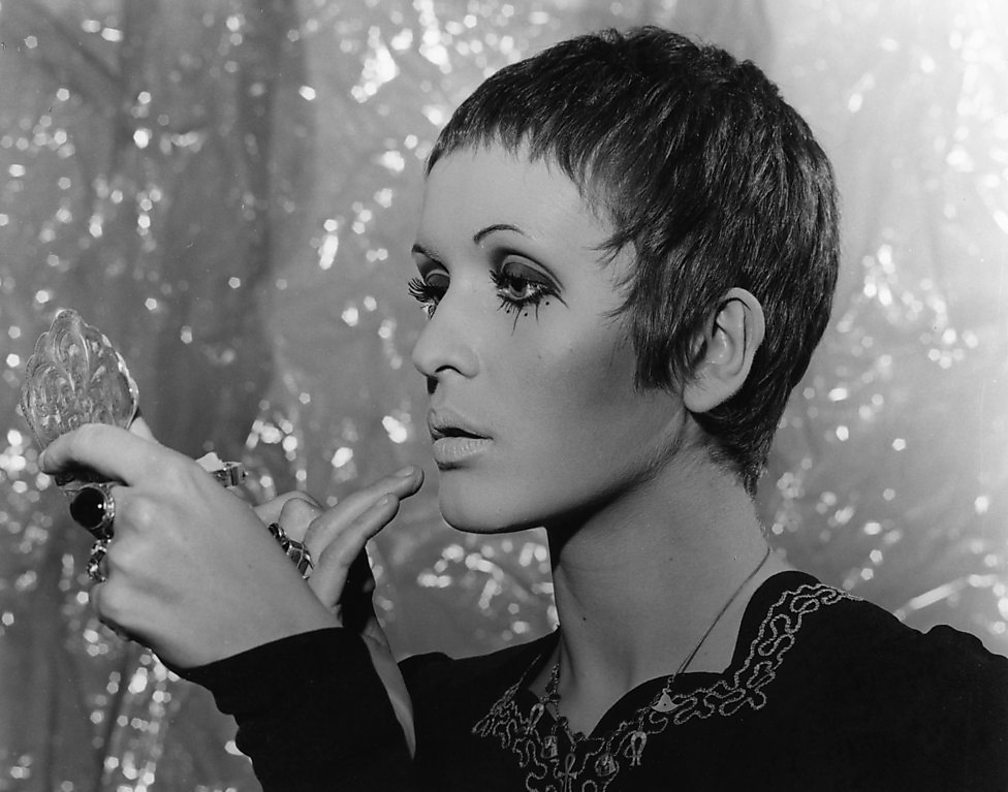 The UK had gone psychedelic by 1968 and Julie Driscoll, Brian Auger & The Trinity's terrific cover of Rick Danko and Bob Dylan's This Wheel's on Fire was a hit - reaching No. 5 in June 1968. Julie recorded the song again in the 1990s with Ade Edmondson after it was chosen to become the theme tune to BBC One comedy series Absolutely Fabulous. 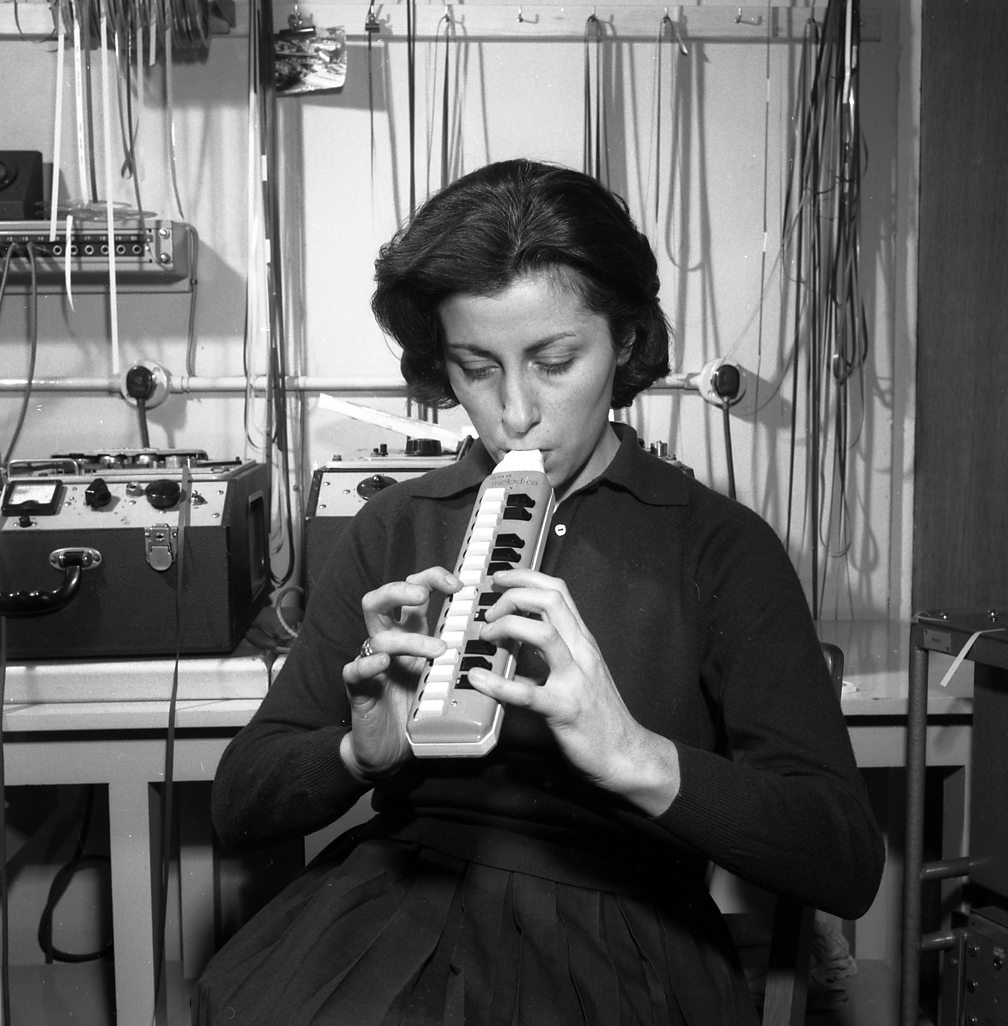 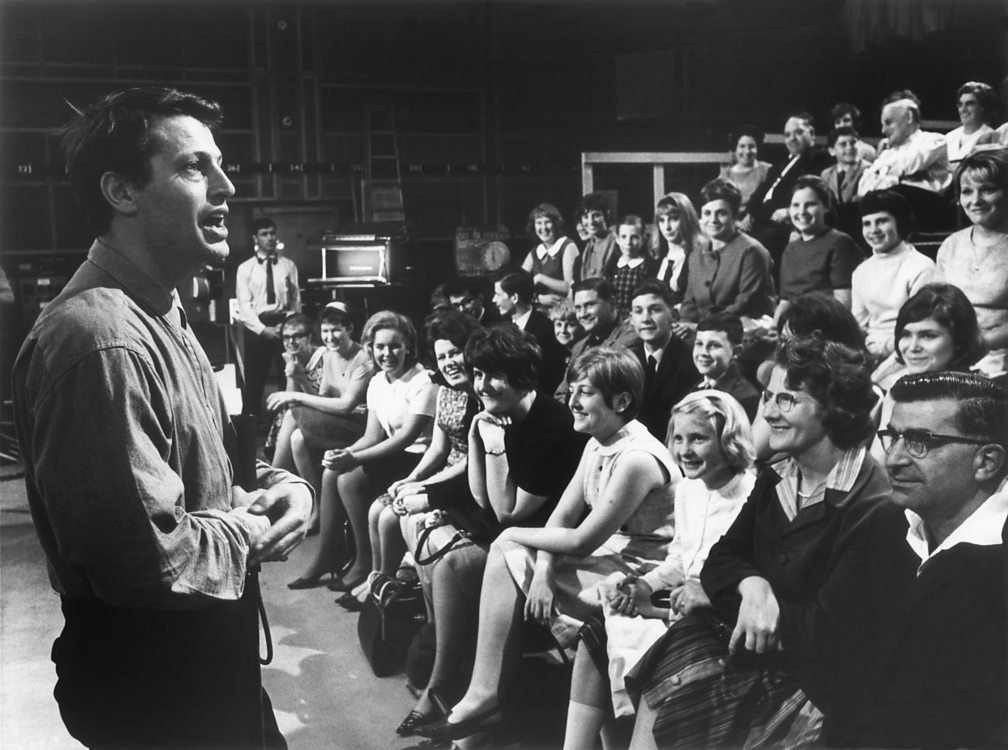 Producer Barry Langford talking to the audience in Studio 2, Television Centre during the warm-up before the live recording of Juke Box Jury, which was broadcast on BBC One on Saturday 30 May, 1964. Juke Box Jury was a music panel show which originally ran from 1959 to 1967, before being revived twice in 1979 and 1989. 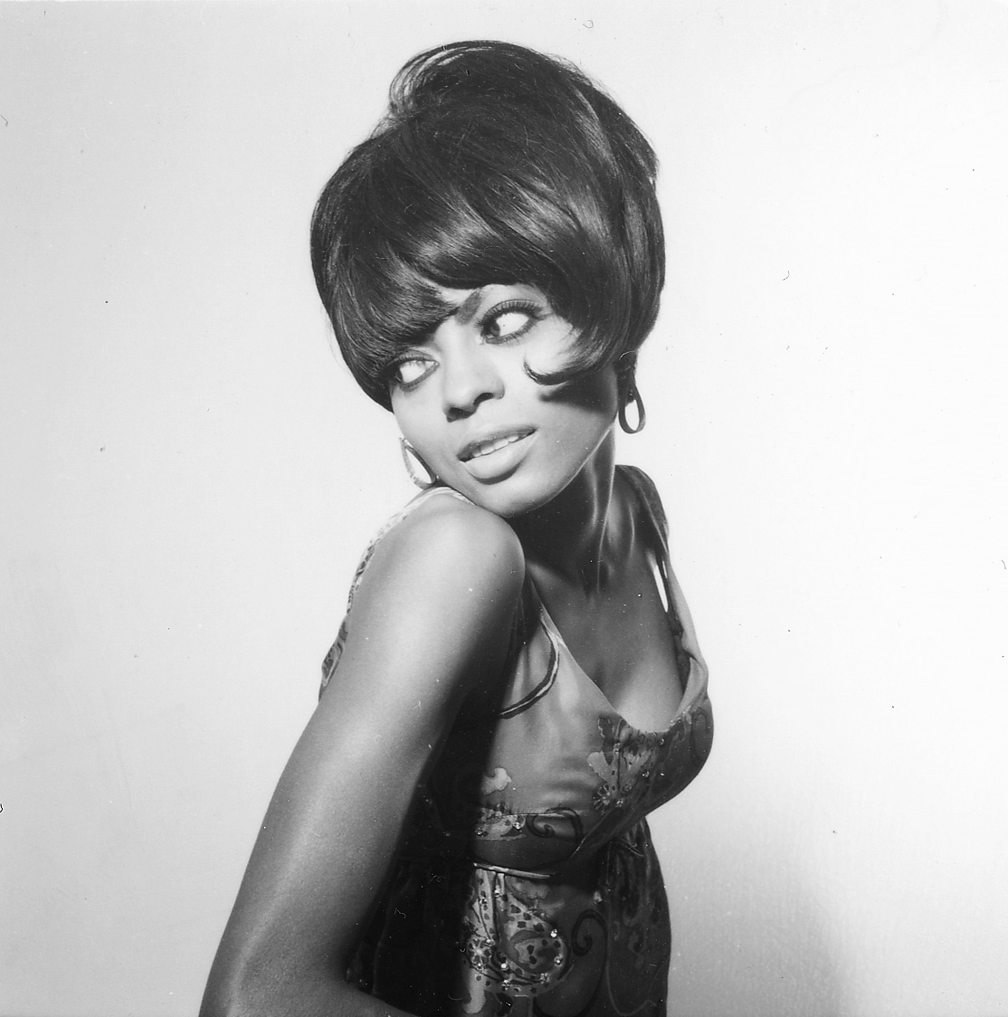 In 1964, Diana Ross was fast becoming the star in The Supremes, who were already huge news as a group. They played the Holland-Dozier-Holland song Baby Love on Top of the Pops that year, which raced to the top of both the UK and US charts. 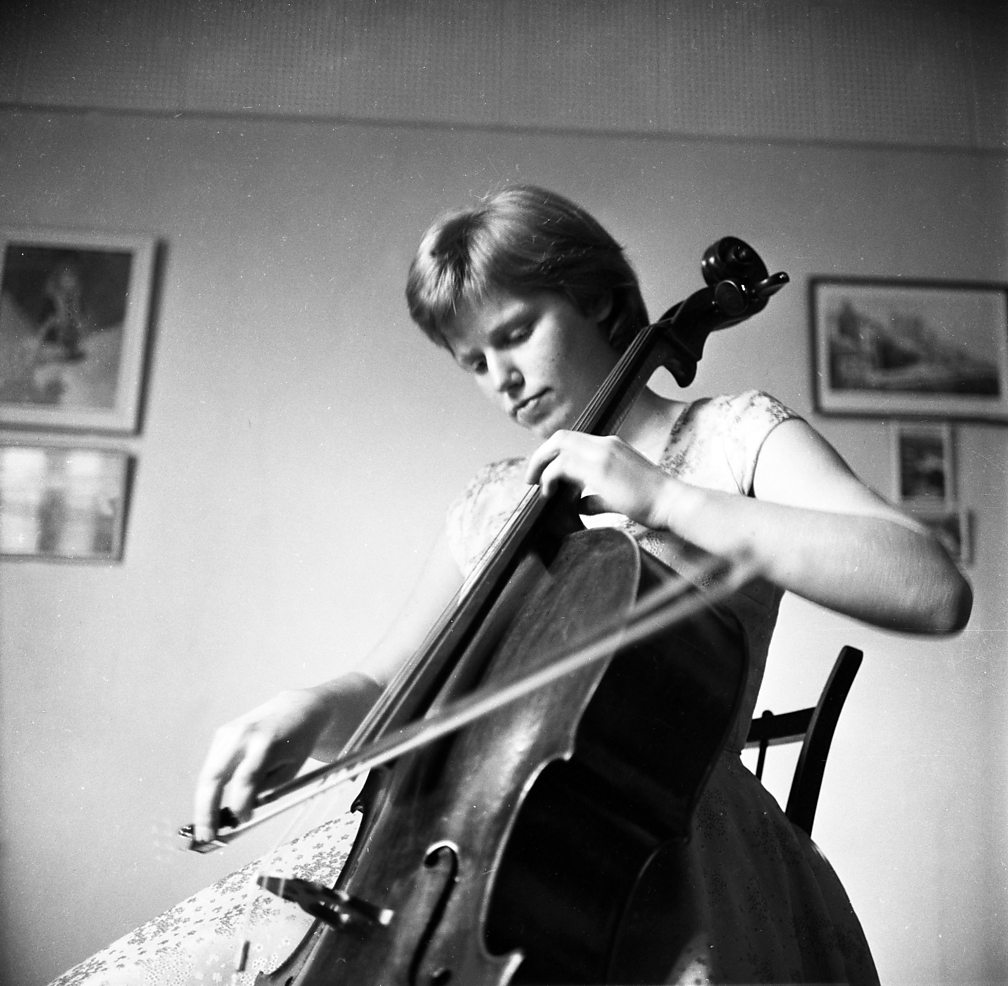 Celebrated cellist Jacqueline Du Pre, aged 16. This image was used to promote a BBC TV recital of cello music. Accompanied by her mother, pianist Iris du Pre, she played music by Mendelssohn, Granados and Saint‐Saëns. Jacqueline, who frequently appeared on BBC Children's Television, heard the cello on Children's Hour when she was five, and decided it was to be her instrument. 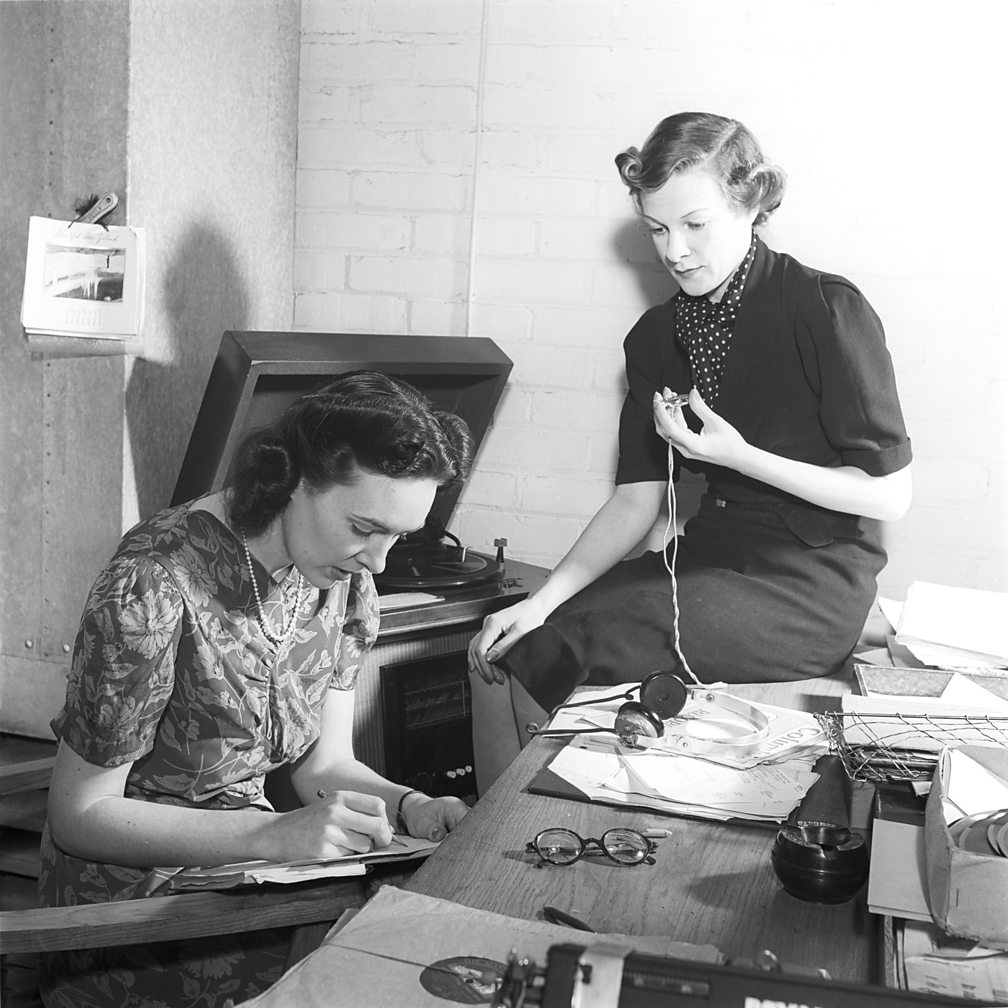 Barbara McFadyean, who presented a weekly programme of "gramophone records of all kinds", with announcer Joan Griffiths. We think the show might have been called Lucky Dip and was broadcast on the BBC Home Service. Barbara was one of four women chosen from tests made by the BBC in their search for "women commentators". 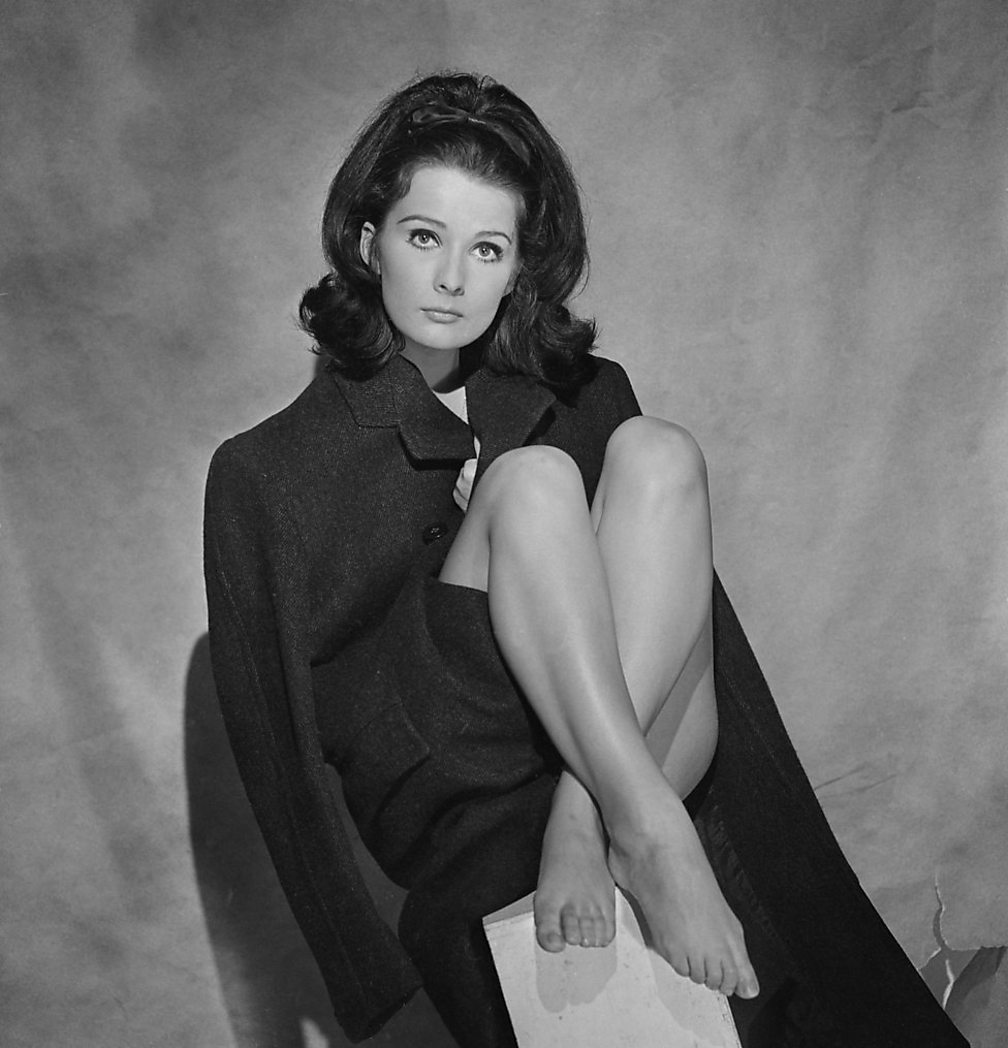 A Top of the Pops promo portrait from August 1968 (we think), when American singer-songwriter Bobbie Gentry broke through with Ode To Billie Joe. A superb Southern Gothic tale of a song, it announced Bobbie as one of the best writers of her generation and was both a No. 1 and a Grammy winner in the US. 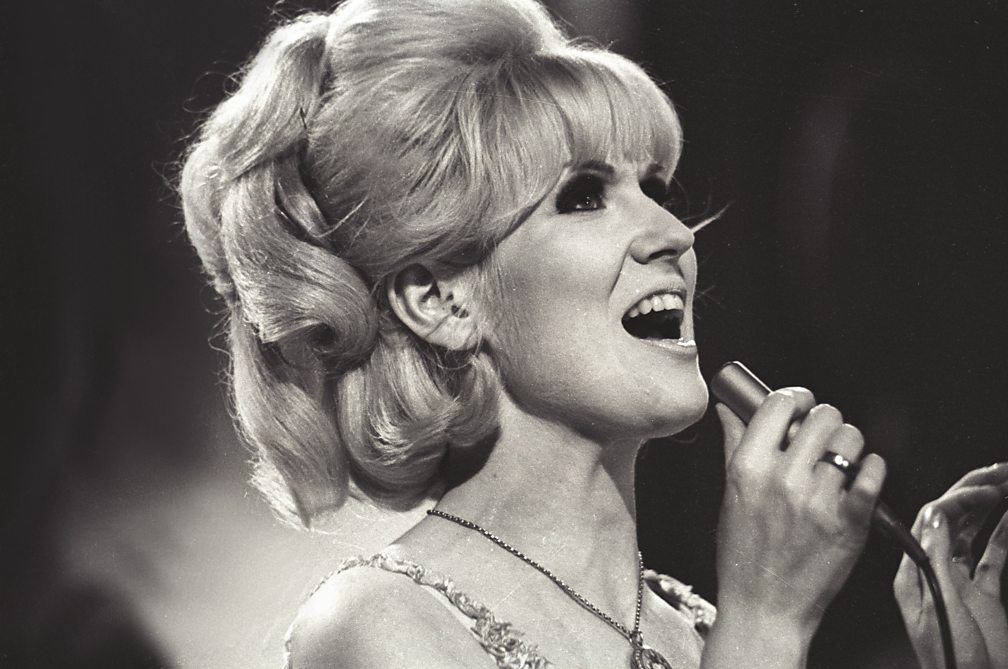 Dusty Springfield ahead of starring in her own weekly series of six programmes that began on BBC One on Thursday 18 August, 1966. The archive caption with this image reads: "They will feature her in a wide range of musical material and give her a chance to shine in ballad, folk, jazz and comedy, as well as the 'pop' for which she is so well-known." 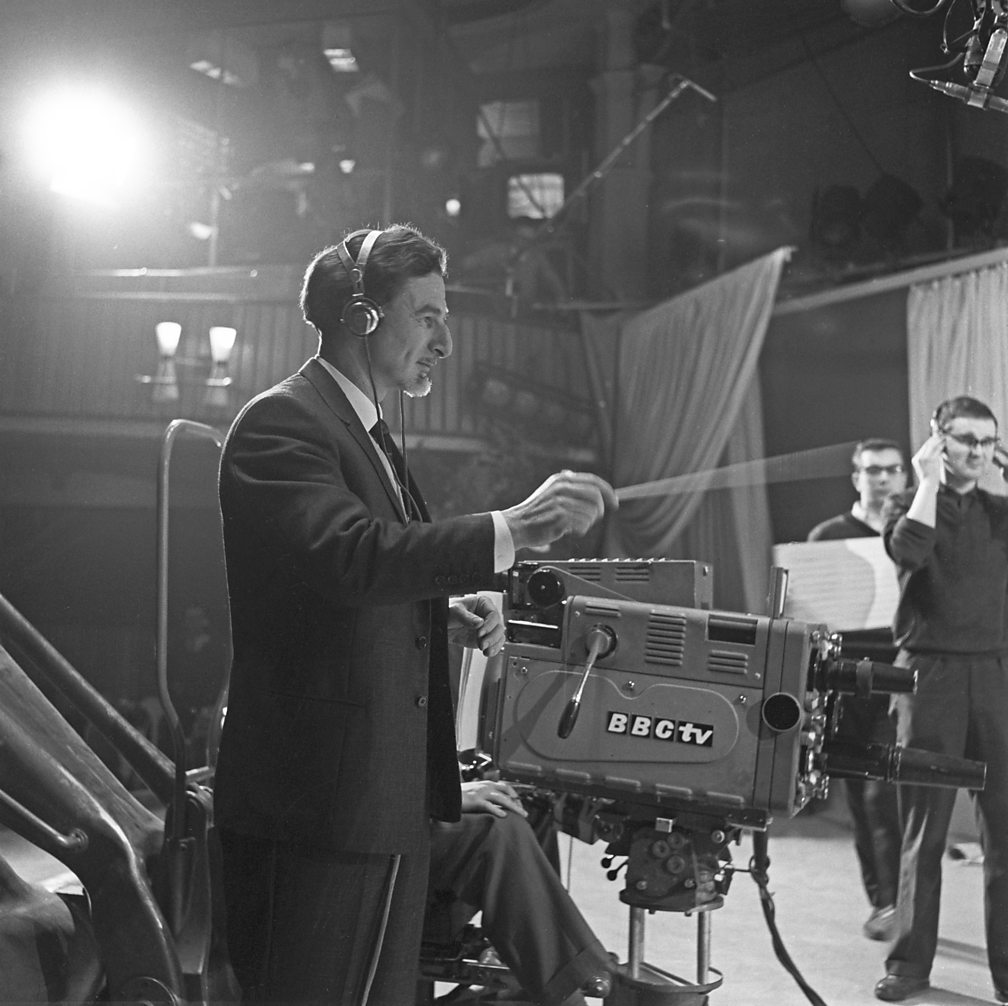 Conductor and composer Harry Rabinowitz was the Musical Director of Light Entertainment at BBC Television from 1960 to 1968, having previously been conductor of the BBC Revue Orchestra. Here he is at work in 1963. In March this year, he turned 100. 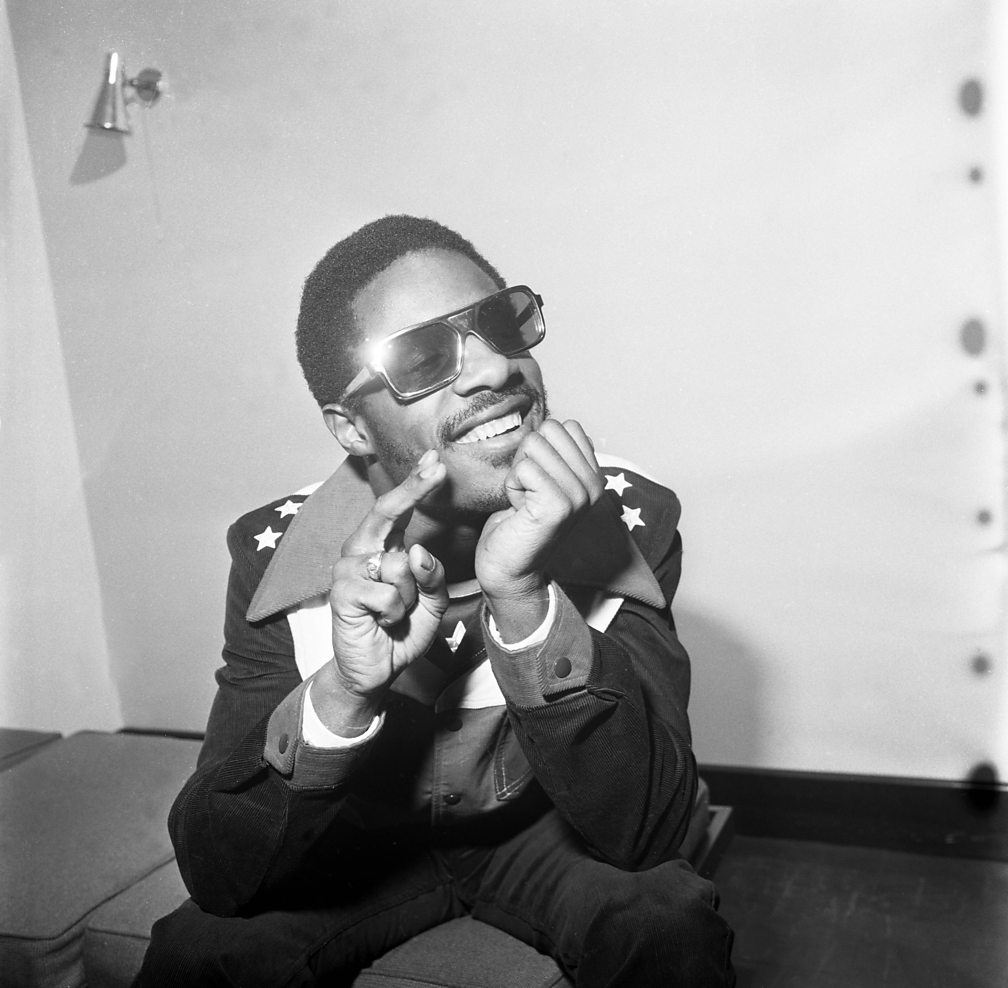 Last, but certainly not least, it's Stevie Wonder, possibly in 1966 when he was riding high with Uptight (Everything's Alright), his first co-written song and perhaps also the first mature Stevie track, although he was just 15 when it came out. He performed the song on Top of the Pops, helping it to reach No. 14, but it had already been a smash in the US.