13 inventive ways musicians have reimagined the Doctor Who theme

The Doctor Who theme is the Bohemian Rhapsody or Wonderwall of TV themes, endlessly covered by amateurs and professionals alike, and always able to withstand any amount of tweaking to suit new genres and new instruments. 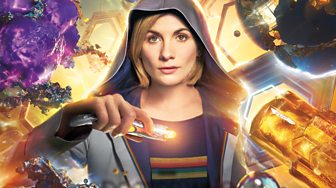 BBC One - Doctor Who

There's a version played just on kazoos, or just trombones, or just violins. There's a Chiptune version, a fingerstyle guitar version, a full orchestra complete with choir and even a smooth guitar version by Hank Marvin. This is clearly a piece of music people love to fiddle about with.

So, ahead of the new new series starting on Sunday, here's a (Tom) baker's dozen of the most imaginative reworkings of Ron Grainer's iconic theme tune.

BBC One - Doctor Who

Kicking things off in fine style, thejerrymobile has orchestrated the two key musical qualities of the Who theme - the pounding bassline and the soaring melody - with wit and ingenuity. The bass is played on a tubulum, an instrument made from plastic drainpipes struck with drumsticks. Meanwhile, that eerie melody comes off the blade of a musical saw - an instrument which is conceptually not a million miles away from a sonic screwdriver, come to think of it.

What if Vangelis did a Doctor Who Theme?

YouTuber GeorgeCMusic has a clutch of clips in which he reimagines the Who theme as if recorded by some of the giants of electronic music. His John Carpenter theme, for example, has the dark brooding intensity of an early 80s horror film, with appropriately jumpy stabs of monolithic noise. This Vangelis-inspired version emphasises the whooshy shuffle rhythm of the original, overlaid with beds of sparkling synths and triumphant martial choirs and glockenspiel-type tuned percussion.

A common factor in these musical Doctor Who clips is the element of cosplay. The Fourth Doctor's scarf and floppy hat pop up a lot, as do the Eleventh's trademark bow tie and fez combo. Here The Warp Zone dress up as five of the Doctor's previous incarnations to pep up their a capella version of the theme. It's interesting to note that if we were to step back in time to the show's original theme - as recorded by Delia Derbyshire - there would be no need for the beatboxing fellow in the bottom row, because there's no percussion on it at all.

This is just exceptionally well done from start to finish. As PlayerPiano, pianist Sonya Belousova plays a version of the Who theme that contains all the stately drama and passion of a piano concerto, and the stage dressing is exceptional, from the TARDIS blue piano to the costumes. The conceit of the TARDIS being up in the clouds is borrowed from the 2012 Christmas special The Snowmen, but her costumes pay tribute to the full range of the Doctor's incarnations (up to 2015, when this was filmed).

Taking a similarly high-minded tack, Matthew Lister has not only donned the Fourth Doctor's wig, coat and scarf, he's interpreted the Doctor Who theme's giddy feeling of constant onward motion using the gently undulating arpeggios of classical guitar. Suddenly this futuristic musical icon of British electronica has developed a distinctly medieval feel. It is almost as if we are travelling in time.

The bassline might be mighty in Delia Derbyshire's original, but is it up to dubstep standards of filthiness? No, it is not. So hats off to Jonoesmusic for grabbing hold of a synth juggernaut, souping up the engine, taking off the silencers, dramatically increasing the weight and filling the petrol tank with top grade Aldebaran brandy, then taking it out to a supermarket car park after hours to do doughnuts.

It's fairly easy to see why metal fans would be so keen on the Doctor Who theme - that galloping rhythm and urgent drama is so ripe for loud rock guitars there was even an official rock remix of the theme for Before the Flood, an episode which also featured the scream of Slipknot's Corey Taylor coming out of the mouth of a tall monster. This version is by far the most popular on YouTube and comes from a short series of iconic science fiction and fantasy themes by 331Erock, which include Harry Potter and Lord of the Rings.

The Doctor Who theme is many things, but funky is not one of them. That's where we need the involvement of a swinging ensemble, ready to take Ron Grainer's loping shuffle and make it pop. Scott Sutherland sets the tune to a gloriously loose beat, a parping tuba underpinning a brass and woodwind ensemble featuring euphonium, trumpet, cimbasso and saxophone, which play the melody parts with the delicacy and bubbling joy of a New Orleans jazz funeral.

Camille and Kennerly Kitt are identical twin harpists with a prodigious output, having released four albums of harp covers, and over 80 singles. So it's only natural that they'd have a go at the Doctor Who theme, and their version mixes the innocence of childhood with the creeping fear of wandering around the toy room of an abandoned Victorian house after dark.

This is surely the closest instrument to Doctor Who itself, in that it sounds rather like an upset Stylophone and has an oddly threatening blank smile that makes the mournfully stoic Cybermen look positively welcoming. The Otamatone was developed in 1998 and bridges the previously unappreciated gap between the Theremin and the Muppets. Conceptually it could not be a better fit with the uncanny valley in which some of Doctor Who's most unsettling creatures reside, and this version of the theme by Pekka Poutanen - in which he shakes the instrument to get a vibrato effect - does rather look like he's fighting off some kind of attack.

YouTube - the Doctor Who theme tune in a ska/reggae stylee

It's official: there's no song or piece of music, no matter how unsettling, that ska can't make more friendly. This relentlessly upbeat version by thesimmertones transforms the Doctor Who theme into an uneasy party-starter, in the vein of Prince Buster's Al Capone or even Madness's Night Boat to Cairo. It tips a pork pie hat to the galloping dread of the original, before forming a Nutty Boy train back to the TARDIS so everyone can get home in time for tea.

YouTube - Doctor Who Theme on cello and cat keyboard - The Doubleclicks

Doctor Who is where serious subjects often collide with hardcore whimsy, and this version by The Doubleclicks has both in spades. Stentorian cellos bow and scrape their way through the dread-fuelled bassline and Murray Gold's churning counterpoint, setting the scene for a dramatic encounter with a hostile alien race, only this one speaks with the voice of... a cute little kitten? Best not to drop your guard though, who knows what disturbing forces hide behind that Cheshire Cat smile.

This is possibly more of a visual delight than sonic, but the Tesla coil does lend itself well to channelling the dominant narratives of Doctor Who, being a mixture of technological advancement and elemental terror. This is what the theme music would sound like if sung by Daleks, and it's by no means the only time a piece of technology has sung the Doctor's music back to him. There's also this version of the theme by MrSolidSnake745, as performed by eight solid state disc drives.