11 of the most bizarre world football songs 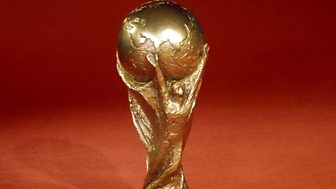 When the World Football Phone-In first sprang into being on Radio 5 live, New Labour had recently swept to power, the Spice Girls were riding high in the charts, and Brazil's Ronaldo had moved that summer to Inter Milan for a world-record £19.5m transfer fee (he would only play 99 games for the club in five years, thanks to a dodgy knee.)

Twenty years later, the world is a very different place, but the World Football Phone-In continues to thrive, despite being on 5 live as part of Up All Night between the ungodly hours of 2am and 4am on a Saturday morning (you can catch up with the podcast in more sociable hours). Presented by Dotun Adebayo, with specialist knowledge coming from the likes of Tim Vickery for South America and Mark Gleeson for the African continent, it's many people's favourite football programme of all time.

We're delighted to offer the following starting 11 of bonkers songs to soundtrack their birthday party - a four-hour extravaganza taking place this Saturday morning.

FourFourTwo recently voted Zidane the eighth greatest player of all time, and it would stand to reason that a song written in his honour would be the eighth greatest football song of all time, although it isn't. Featuring the voice of the late great Aussie sporting commentator Les Murray, Melbourne-based five-piece Vaudeville Smash racked up an eye-watering A$20,000 of debt to promote the song themselves ahead of the 2014 World Cup. More than 8.5m YouTube views later, it looks like the bet paid off, with the song getting the band plenty of worldwide exposure.

"Lionel Messi, Gareth Bale, Kewell," deadpans Murray, like Kewell is the one worthy of one name-recognition. "Nedvěd, Maldini, Agüero, Raúl… but the strongest of them all?" Why, Zizou of course.

The video is one part Point Break-style heist in masks, one part superskills demonstration, all set in a 24-hour shop.

In a similar act of hero worship, Bosnia and Herzegovina duo Sanjin & Youthman wrote a hymn to the talismanic Swedish striker Zlatan Ibrahimović in 2013, and they've racked up nearly 10m YouTube hits in the process. Simply titled Zlatan (because he only needs one name, and often uses it in the third person), their Balkan dancehall barnstormer is a testament to the monolithic player’s immense talent, whether as a Paris Saint Germain legend, a Manchester United legend or as a legend in his own household. The video is a mini roadmovie in which the protagonists hitch to Malmo to meet their hero by hook or by crook, though the "to be continued…" message at the end of the clip implies they may be walking to Manchester as we speak. 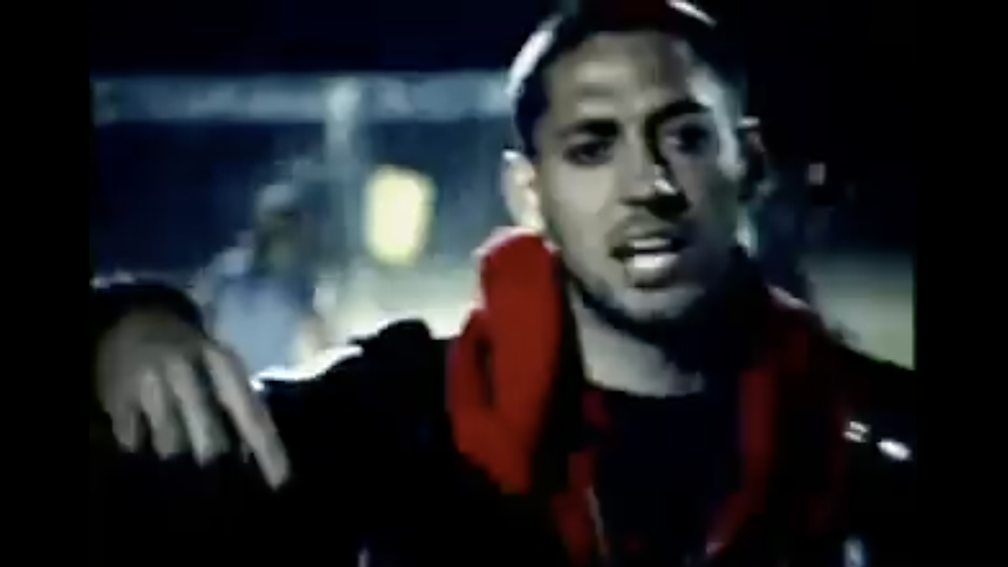 Is it Eminem's Lose Yourself? Is it 50 Cent's In Da Club? Nope, it's Clint Dempsey, Fulham and Seattle Sounders stalwart with the Houston rapper Big Hawk for company. Going by the name of Deuce, Clint throws his hands in the air like he just don't care about law XII that states that it's illegal for a player to handle the ball deliberately, unless he's a goalie in his own area. The Texan, who has scored 57 goals to date for the USA, probably shouldn't give up the day job. And he should quit calling the game soccer, too. Deuce's pal Big Hawk was tragically shot dead in 2006, the same year this track was released in the run up to the World Cup in Germany. 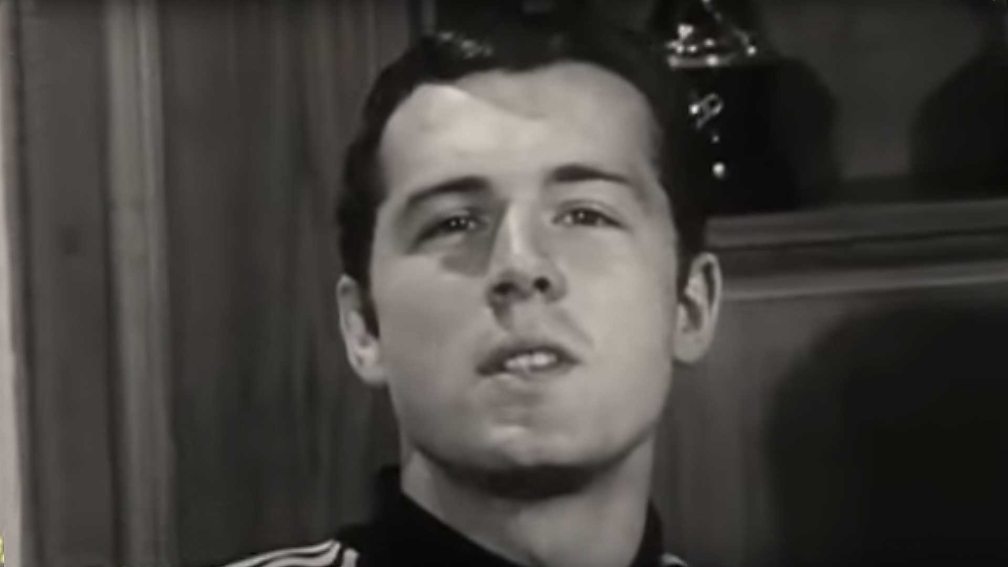 Who is the sheepish crooner dressed down in a tracksuit with all his footballing pals sat around him? It's only Franz Beckenbauer, the elegant German and Bayern Munich central defender who won a World Cup as a captain and one as a coach (1974 and 1990, respectively). Beckenbauer recorded a single, Du Allein (You Alone) in 1967, with the a-side Gute Freunde Kann Niemand Trennen (Nobody Can Separate Good Friends) apparently chiming better with the public in his home country. It reached No.31 in the German charts.

The Kaiser is a big fan of singing - in 2012 he chastised the German national side for not roaring along to the national anthem at the European Championships, where they were ejected by Italy in the semis: "Ardour must begin before kick-off and singing loudly together helps with that," he stated. A roused Germany went on to win the World Cup in Brazil two years later in 2014. It was the singing wot won it.

Thirty-something Helsinki hipsters Teflon Brothers scored their first No.1 in their home country of Finland in 2014 with an electro dance ditty dedicated to a footballing deity. Argentine Diego Maradona is the focus, while the catchy keyboard line comes straight out of Touch Me by Samantha Fox.

Finland has never competed in a World Cup, so to beat England they must do it vicariously through other teams, and there are few better examples of a demolition by a team with one truly anointed warrior than the 1986 quarter final between Argentina and England at the Estadio Azteca in Mexico City. In scenes reminiscent of An Evening with Gary Lineker, the Teflon Brothers watch on TV as Beardsley, Butcher, Shilts et al. come unstuck to the 'Goal of the Century', and then the more contentious 'Hand of God' (only one of them was a lovely finish).

Apropos of nothing, Teflon Brothers sought an extra member later that same year in 2014, and allowed professional poker player Ilari Sahamies to join the group for the fee of €50,000.

Not sonically the most bonkers offering on the list, but Scotland's France 98 song was less a braggadocio declaration of intent and more a public service announcement written in order to manage expectations. Having been knocked out in the first round of the World Cup seven times before, the subtext from Del Amitri was this: get to the round of 16 and you'll come home heroes, boys.

The damage to the national psyche may have come from some extraordinary hubris 20 years earlier. Ally's Tartan Army were so confident of coming back with a medal in 1978 that they held a parade at Hampden Park before they'd even set off for the Argentine World Cup. A loss to Iran and a draw with Peru meant even a classy victory over the mighty Netherlands wasn't enough to go through.

Sadly the Glaswegian soft rockers' words weren’t heeded in 98 either - they came home on the first plane and poor Scotland haven't been back to the World Cup since. 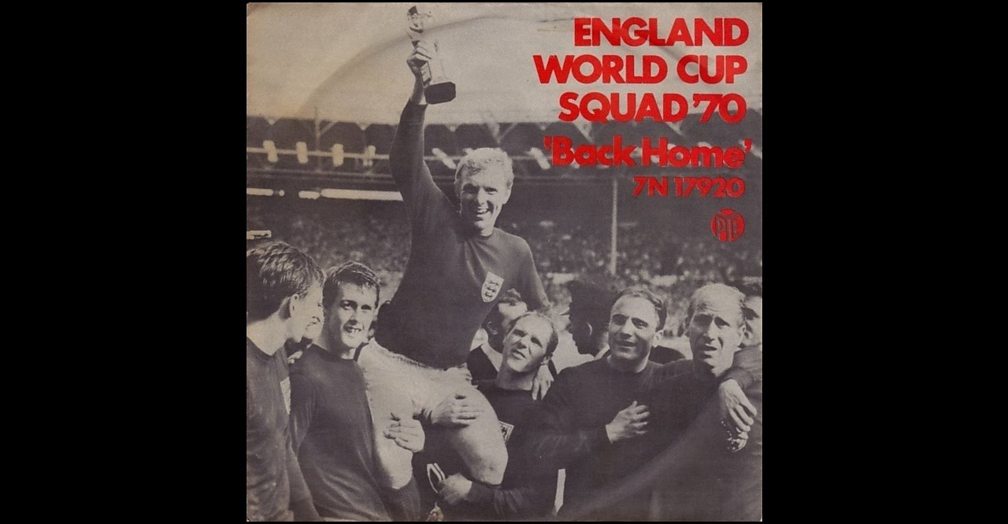 The tradition of having the England squad perform a song ahead of each World Cup campaign started in the run up to Mexico 1970, and the a-side, Back Home, went to No.1 back home, even though England failed to retain their title as world champions. With any inchoate enterprise, clearly nobody really knows what they're doing, which is evident in the choice of b-side. Cinnamon Stick is a racy little number with a musical accompaniment from a session beat combo that would have fitted the Mersey Sound.

It's a cheerful tune with a whistleable melody, though what it has to do with football, or anything else for that matter, still remains a mystery to this day. 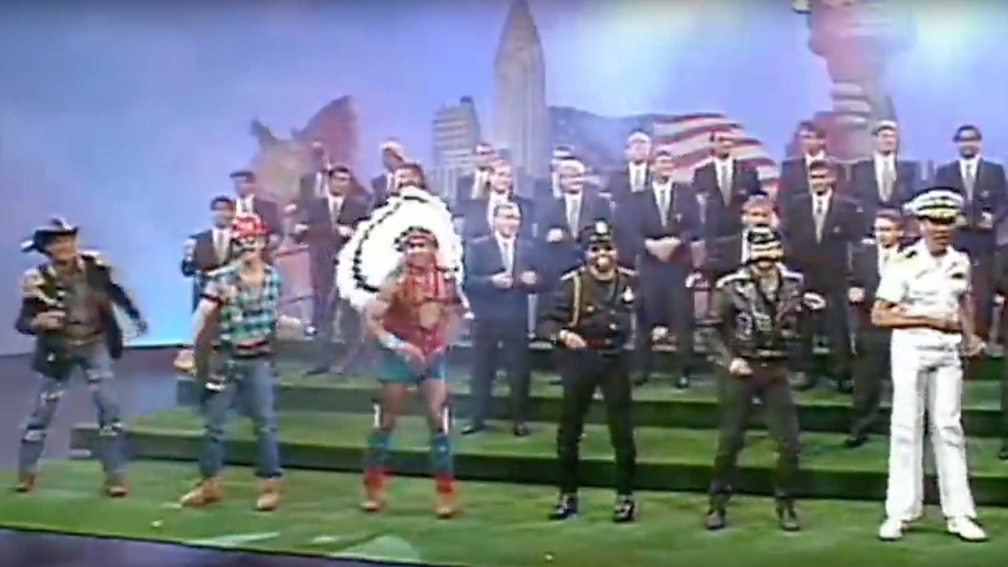 England didn't qualify for the 1994 World Cup in the USA, but worse than that, they didn't get to record a squad song with the Village People, unlike their arch-rivals Germany. Catchy, camp and anthemic, Far Away in America is vintage stuff from the band who ruled the world with YMCA in the disco era, but it was sadly stiff-armed by the record buying public in Germany, only reaching No.44 in their national charts.

The lyrical content may have had a lasting impact on Jurgen Klinsmann however. The striker-turned-manager relocated to the United States and led the national side there for five years between 2011 and 2016, reaching the last 16 at the Brazilian World Cup. 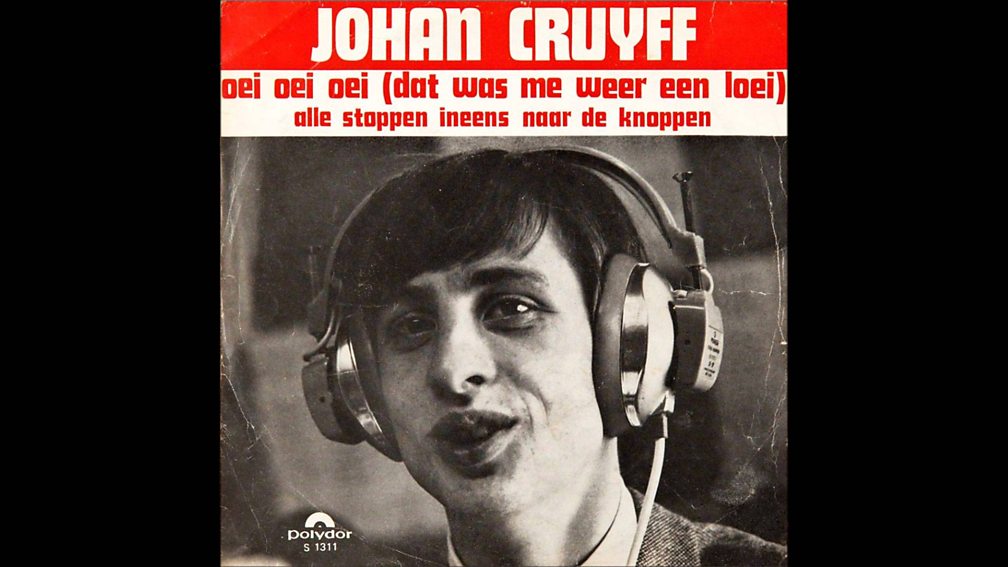 Total football legend Johan Cruyff rode the 1970s like a footballing colossus, after he recorded this little turn in 1969. The joyous and slightly nonsensical schlager singalong impacted the Dutch charts, rising as high as No.21.

With his sardonic delivery, Cruyff could have been the Netherlandish Jacques Dutronc, but he had bigger fish to fry. He won a runners-up medal at the 1974 World Cup and was player of the tournament, and the year before he transferred from Ajax to Barcelona for a then world record 6m guilders. Somebody at Polydor saw there was a quick buck to be had and, to coincide with the transfer, released Oei Oei Oei in Spain where it proved popular.

Sadly, Cruyff, who consensus usually dictates is one of the three greatest players of all time, died from lung cancer last year.

Ruud Gullit - Not the Dancing Kind 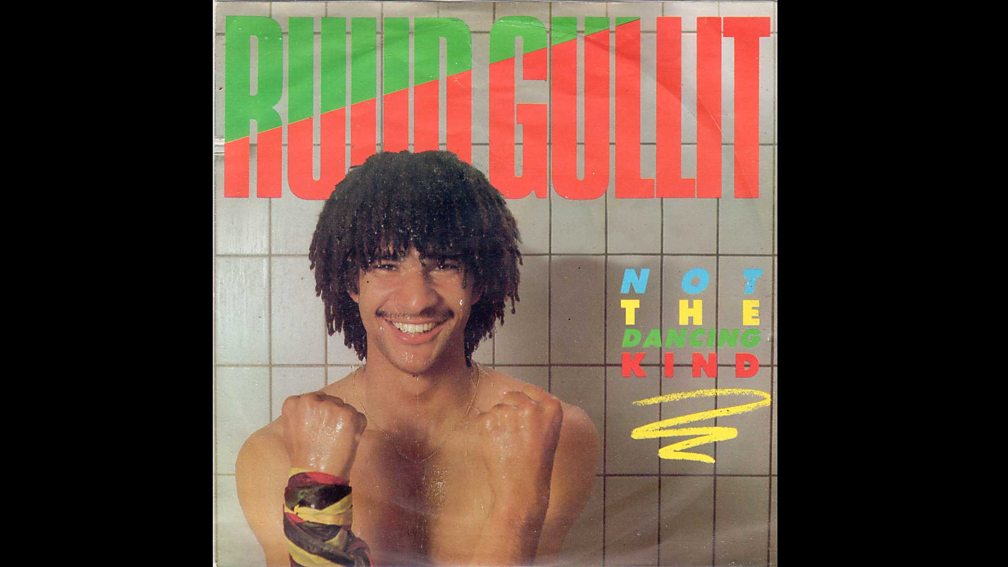 Cruyff's fellow Dutch master Ruud Gullit, who was the captain of the 1988 UEFA Euro conquering side, also moonlighted as a pop singer for a brief period, with mixed results - he recorded the reticent reggae number Not the Dancing Kind with so much echo on his voice it could have been recorded in a giant underground cistern.

The single was released in 1984 and produced by the aptly named Peter de Wijn, and was a minor hit in Holland and Italy. Whether he could dance or not, the footballer did later coin the term "sexy football" while appearing as a pundit on Match of the Day in 1996. Gullit also released an anti-apartheid song called South Africa with the reggae pop group Revelation Time, which went to No.3 in the Dutch charts, also in 1984.

Not the Dancing Kind was re-released in 1988 to cash in on the AC Milan midfielder's Euro success. It would have been Ruud not to. 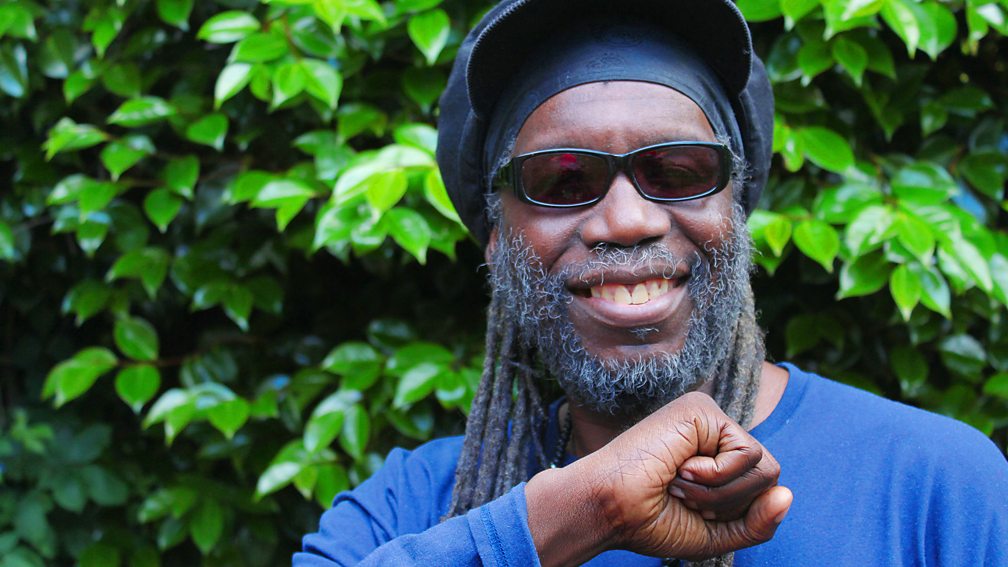 In 2002, Wolverhampton dancehall musician Macka B turned football saga balladeer when he released Pam Pam Cameroun, a retrospective reggae number that recounted the progress of the unfancied Cameroon national side at the 1990 World Cup.

"The next team they play was Argentina," sang Macka, "5000-1 in the bookmaker / And oh what a match, what a spectacular / The 10 Cameroon beat Argentina / Them all stop talk about Maradona..."

After pulling off the greatest upset in World Cup history, Roger Milla and the boys nearly pulled off the same feat against England in the quarter final. Pam Pam indeed.