When fake musicians have to play real gigs

For actors, getting under the skin of a musician isn't just a matter of getting the look and the voice right, there are all the tiny actions that are crucial to their craft - playing an instrument, moving your body - that you've got to nail.

And that would be fine if you didn't also have to do it in front of an audience, the way actual musicians have to in order to earn a living. Fake movie bands made from real musicians - The Blues Brothers, The Rutles - may be already comfortable treading the boards and rocking out, and can even head out on tour, but some actors have to really pluck up their courage to live the rock star fantasy.

A Star Is Born is the year's great musical blockbuster, and features Lady Gaga as an aspiring singer. It's directed by Bradley Cooper, who also stars as a country music star, and in order to film some of his onstage scenes, Bradley had to don a guitar and take to the stage at last year's Glastonbury festival, in the middle of a set by Kris Kristofferson, who starred alongside Barbra Streisand in a 1976 version of the film. To make matters more confusing, the songs from the film were only audible to the musicians onstage and people at the very front, so that no one could bootleg the performance.

Bradley told the Sun he was apprehensive about playing: "I didn't know if they were going to throw bottles at me. I was very nervous about Glastonbury as that is a tough crowd. [People were saying] 'Who is this guy? What is happening? Where's Kris Kristofferson?'"

And he had to sing live, because his co-star insisted: "When I approached her, she said, 'You are going to have to sing live as I cannot stand those lip sync-type movies.' It was the scariest thing, but I really enjoyed it."

YouTube: Tom Hiddleston performs I Saw The Light live in the Wittertainment studio

When he prepared for the role of Hank Williams in 2015's I Saw the Light, Tom Hiddleston had to endure a lot. He had to endure a strict diet, and went running for miles across Tennessee to try and lose enough weight to approximate Hank's gaunt frame, while spending six or seven hours a night singing with country star Rodney Crowell in his Nashville home, to try and get the accent and delivery just right.

And this was after he'd endured the ultimate test, performing in front of a dedicated country audience, a good deal of whom would have had no idea who he was. Rodney said on Facebook: "The classically trained British actor arrived in Nashville on the fourth day of the month and the very next day climbed on a tour bus bound for Michigan and the Wheatland Music Festival.

"I asked Tom if he'd like to join us onstage and sing I'm So Lonesome I Could Cry, a Hank Williams song I'd heard him practising on the bus. I was surprised when he said yes and skillfully performed the tune before what must have been 1,500 people. Later that night, with my band on the main stage, and with very little urging from me, he rendered a joyful version of Move It On Over. Afterward, brimming with delight, he admitted, rather boyishly, that he'd never in his life performed with a band and had loved it." 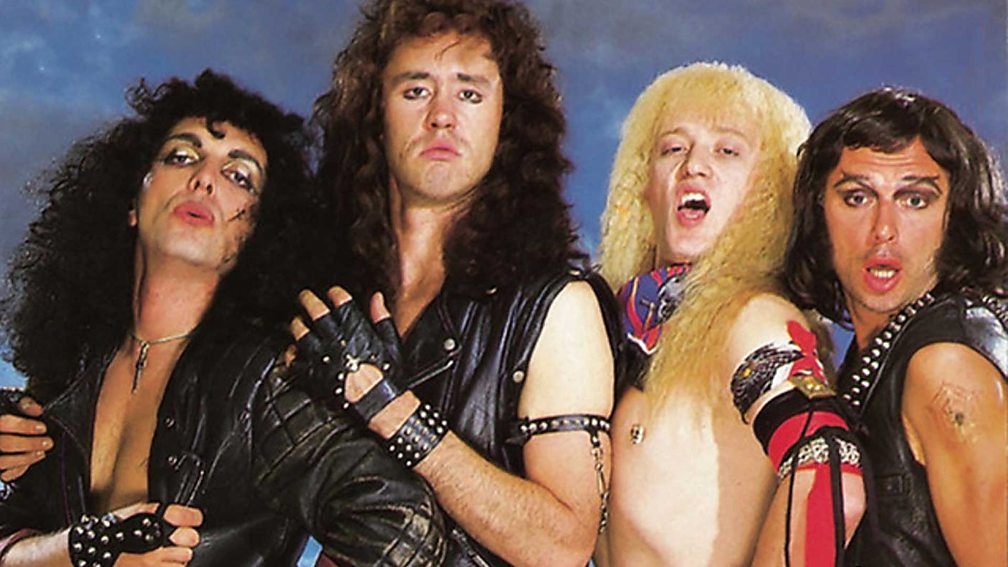 In stark contrast to the experiences of Bradley and Tom, Rik Mayall and Adrian Edmonson's spoof metal band Bad News were not welcomed with open arms by rock fans when they took to the stage at the Monsters of Rock festival at Castle Donington in 1986. Or at least, that's how it appeared when the edited footage appeared in More Bad News, part of Channel 4's The Comic Strip Presents... The mock documentary ends with the band being bottled offstage, roundly dismissed by their peers, beaten up and carted off to hospital.

However, fan footage of the entire gig has emerged on YouTube suggesting that the metal-loving audience were largely in on the joke, and even cheered the band on and offstage, calling for more as they left. Sure, there may have been the odd plastic bottle heading towards the stage, but as this was traditional for the Monsters of Rock, it has to count as friendly fire.

The Folksmen at Carnegie Hall, 2001

Liam had seen the film and loved it, and thought they were a real band
Noel Gallagher

You'd think appearing as a well-known fake band in front of a sympathetic audience would be a fairly trouble-free experience; everyone's in on the joke, any mishaps are assumed to be on purpose, it's all good. But when Spinal Tap played at Carnegie Hall, there was an extra layer of subterfuge that didn't sit well with everyone in the audience.

Before the mighty Tap appeared, Michael McKean, Christopher Guest and Harry Shearer - the band's three frontmen and very accomplished musicians - appeared onstage with acoustic guitars, performing as The Folksmen. The trio were another fake band invented for Christopher's 2003 folk spoof A Mighty Wind and, according to Noel Gallagher, their appearance burst a bubble in brother Liam's mind.

In an interview for the Guardian, Noel told David Walliams: "We went to see them play in Carnegie Hall. Before they played, they came on as three folk singers from the film A Mighty Wind. We were laughing and [Liam] said: 'This is s***.' We said: 'No, those three are in Spinal Tap. You do know they are American actors?' 'They're not even a real band?' 'They're not even English! One of them is married to Jamie Lee Curtis.' 'I'm not having that,' he says, and walks off right up the middle of Carnegie Hall.

"He's never watched Spinal Tap since. He'd seen the film and loved it, and thought they were a real band."

Liam had seen the film and loved it, and thought they were a real band
Noel Gallagher

SORONPRFBS "I Love You All" live in New York City

This fan footage is noteworthy not just because it's a rare performance by The Soronprfbs - the house band of Jon Ronson's superb 2014 film Frank - but because it also features Michael Fassbender wearing his Frank Sidebottom head in the wild. It all makes a smidge more sense if you've seen the film, but suffice to say that really is him, the band really does consist of Maggie Gyllenhaal on synth and Domhnall Gleeson on piano, with François Civil on guitar and Autolux's Carla Azar on drums.

All the actors learned their instruments to play live in the film, so it was natural to grab their gear (and a Frank head) and perform the film's emotional highlight - the song I Love You All - at the afterparty at New York's The Westway.

And they're not the only band who came together to make a film and then got back together once the cameras had been packed away. In 2013, to celebrate the 10 year anniversary of the film School of Rock, Jack Black was reunited with the cast, his band, and they performed the film's triumphant final number live for a special concert in aid of director Richard Linklater's Austin Film Society foundation.

[WATCH] The "rapping Proclaimers" in The Great Hip Hop Hoax

This is a slightly different case, in that the performers were musicians first and really only became actors in order to get noticed, but they were certainly a fake band playing real gigs. Silibil n' Brains were a Californian hip hop duo in the early 2000s poised for massive pop success, except they weren't actually from California. Billy 'Silibil' Boyd and Gavin 'Brains McLoud' Bain were Scottish students, convinced that their natural accents were holding them back.

Having been mockingly referred to as "rapping Proclaimers" at auditions, they decided to adopt American accents and pretend to be from San Jacinto, California, visiting the UK to try and build up an international fanbase. And it worked. Everywhere they went their frat boy antics and comedic lyrics won them fans, and they signed to Sony Music for two singles and an album. They opened for Eminem's rap group D12, having told reporters that they knew the band from "way back".

It was only record company job losses that delayed the release of their first song. With career momentum lost, work started to dry up and Billy eventually left the group. At that point their secret came out. Gavin later wrote a book about their experiences called California Schemin' (later renamed Straight Outta Scotland), which formed the basis of the BBC Storyville documentary The Great Hip Hop Hoax.