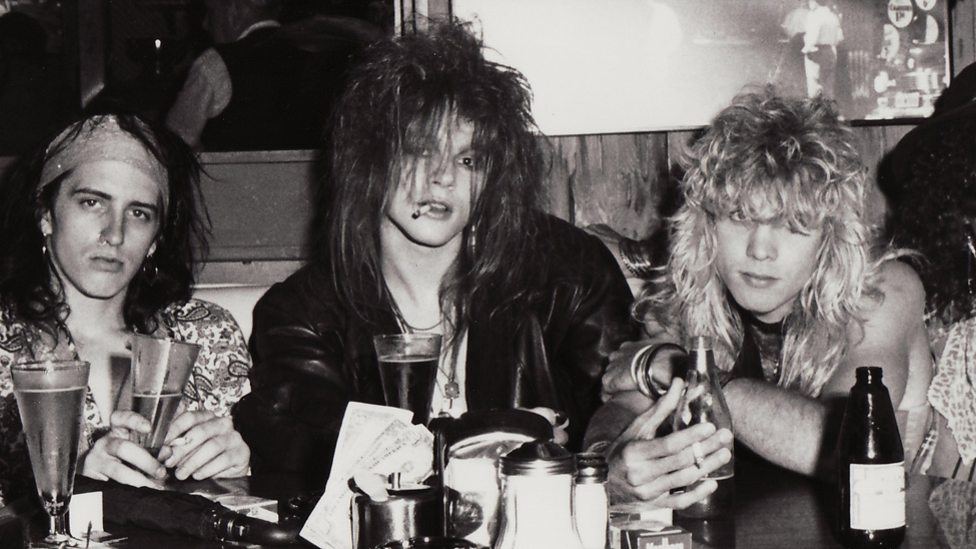 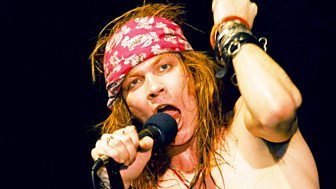 [WATCH] The Most Dangerous Band In The World: The Story of Guns N' Roses

Award-winning English director Jon Brewer has focused his lens on Guns N' Roses for his latest film, broadcast by BBC Four on 5 February. The Most Dangerous Band In The World: The Story of Guns N' Roses lets their tale of sex, excess and success tell itself, without judgement.

And, of course, Brewer's feature-length film couldn't be more timely. In April, core original members Axl Rose, Slash and Duff McKagan will be playing as Guns N' Roses for the first time since 1993 - in Las Vegas, then as Coachella headliners - exciting their still-massive fanbase, but also raising eyebrows.

Has the time passed on Guns N' Roses? Phil Hebblethwaite argues that there are many reasons why having Guns N' Roses back feels out of step with the world we live in now.

[WATCH] The Most Dangerous Band In The World: The Story of Guns N' Roses 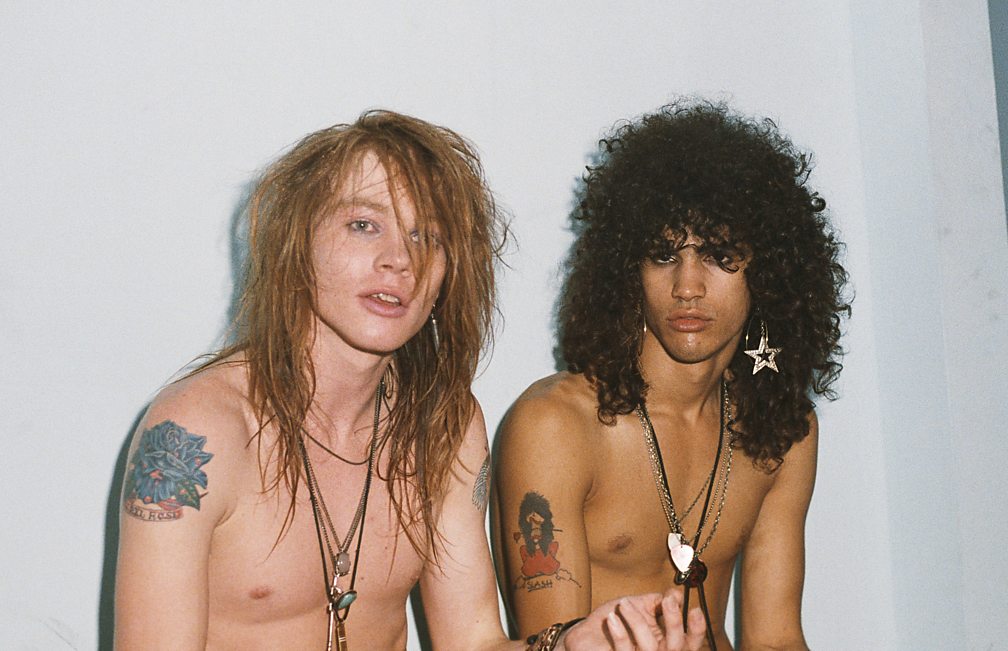 As recently as 2009, Rose said: "Personally I consider [Slash] a cancer and better removed." So you'd be forgiven for thinking this reunion is just about money. In September 2015, German newspaper Bild reported that lawyers had been sitting on an agreed contract for two years, and Slash's divorce from his now ex-wife Perla was causing a delay. He was, Bild claimed, waiting for proceedings be finalised so that she wouldn't receive 50 per cent of his income from the reunion.

American music industry mag Billboard reported the band could be making as much as $3m per show on their tour, resulting in ticket prices that have been called "outrageous" - $79.50 to $350 for general admission to two Coachella warm-up shows at the T-Mobile Arena in Las Vegas.

Many ordinary Guns N' Roses fans are being priced out, and there's a wider point here. James Murphy from LCD Soundsystem was forced to explain his band's reformation on Facebook after it was announced they would be co-headlining Coachella after just five years of retirement. We've reached a tipping point - when bands get back together now, it feels like we're being conned.

2. They represented the worst excesses of misogyny in rock music 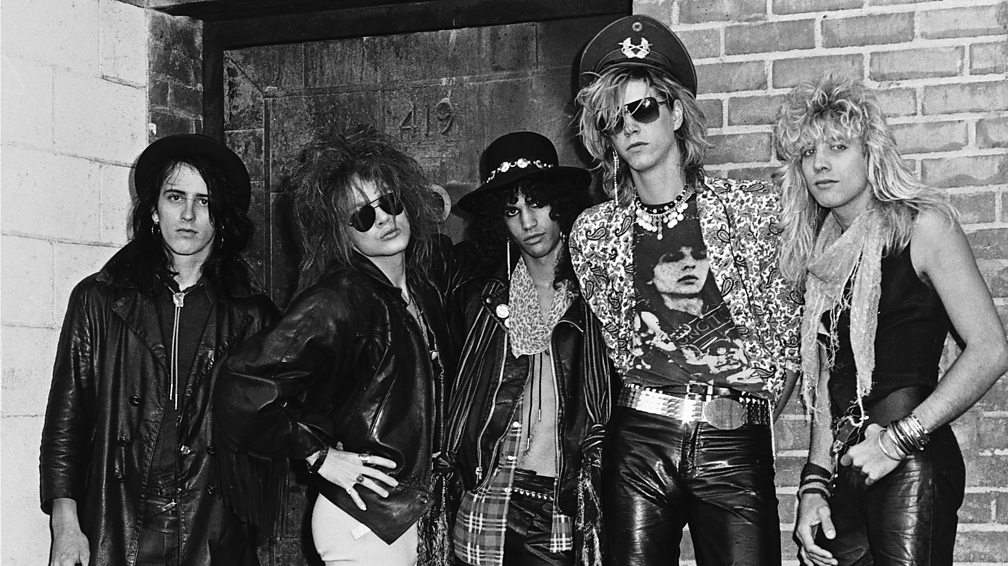 "Turn around, b****, I got a use for you, besides, you ain't got nothing better to do, and I’m bored,” sings Rose on It's So Easy from their debut album, Appetite for Destruction, and Use Your Illusion includes this line from Back Off B****: "Nasty ballbreaker, stay out of my bed, outta my head, if it's lovin' you, I'm better off dead."

Appetite for Destruction originally featured a cover design by artist Robert Williams depicting what became known as a 'robotic rapist' being attacked by a dagger-toothed monster. The band defended the artwork saying it was "a symbolic social statement, with the robot representing the industrial system that's raping and polluting our environment", but it was nonetheless pulled by the band's label Geffen after much controversy.

The band's image wasn't helped when Rose became caught up in two complicated domestic abuse cases in 1993 and 1994, both of which were settled out of court with Rose reportedly paying damages.

3. One in a Million remains a blot on the band's conscience 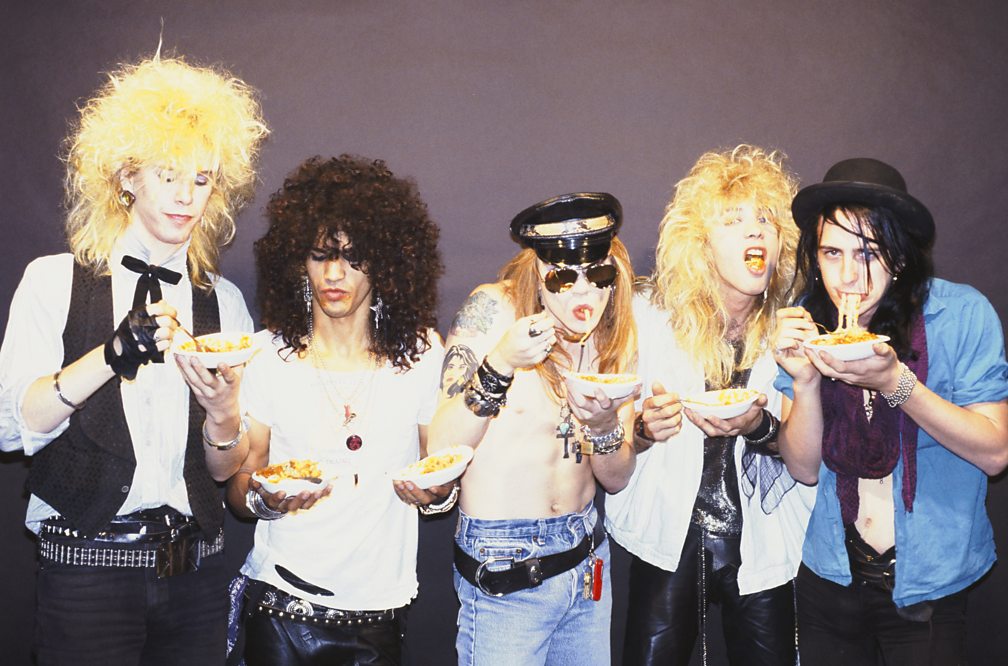 The eighth track on the follow-up to Appetite for Destruction, 1988's G N' R Lies, was One in a Million - an Axl Rose song about being hassled in the Los Angeles Greyhound bus station when he first arrived in the city. It contains the n-word and the word f*****, and led to accusations of Rose being both racist and homophobic.

In 1991, Jon Pareles from the New York Times wrote: "With One in a Million on G N' R Lies, the band tailored its image to appeal to white, heterosexual, nativist prejudices, denouncing blacks, immigrants and gays while coyly apologising 'to those who may take offense' in the album notes. Criticism only made the band dig in its heels."

Rose said in 1992, "It was a way for me to express my anger at how vulnerable I felt in certain situations that had gone down in my life," but there was no way of excusing that song then, and there isn't now.

Here's Slash talking about writing the riff on Sweet Child O' Mine - perhaps the best Gun N' Roses song on their debut along with Welcome to the Jungle. It was those two tracks that turned the group into superstars, but music critic John Doran, editor of The Quietus, believes Appetite for Destruction ultimately had a negative effect on rock:

"1986 was arguably the most important year in the four-decade history of heavy guitar music. It saw the release of Reign in Blood by Slayer, Master of Puppets by Metallica, Crumbsuckers' Life of Dreams, Iron Maiden's Somewhere In Time, Megadeth's Peace Sells... but Who's Buying?, The Age of Quarrel by Cro-Mags, Sepultura's Morbid Visions, I Against I by Bad Brains. Not only that but metal was for the first time starting to influence disparate genres in positive and unexpected ways, such as Run-D.M.C.'s Raising Hell and Beastie Boys' Licensed To Ill (featuring Kerry King of Slayer).

"Heavy rock was truly progressive, but then it felt like the most reactionary forces as epitomised by Guns N' Roses tried to wipe all of this out in one fell swoop a few months later in 1987 - all of the sonic innovation was gone, all of the interesting lyrics, all of the crossover with hip hop, all of the speed, all of the avant-garde impulses in favour of retro-flavoured stadium rock bombast." 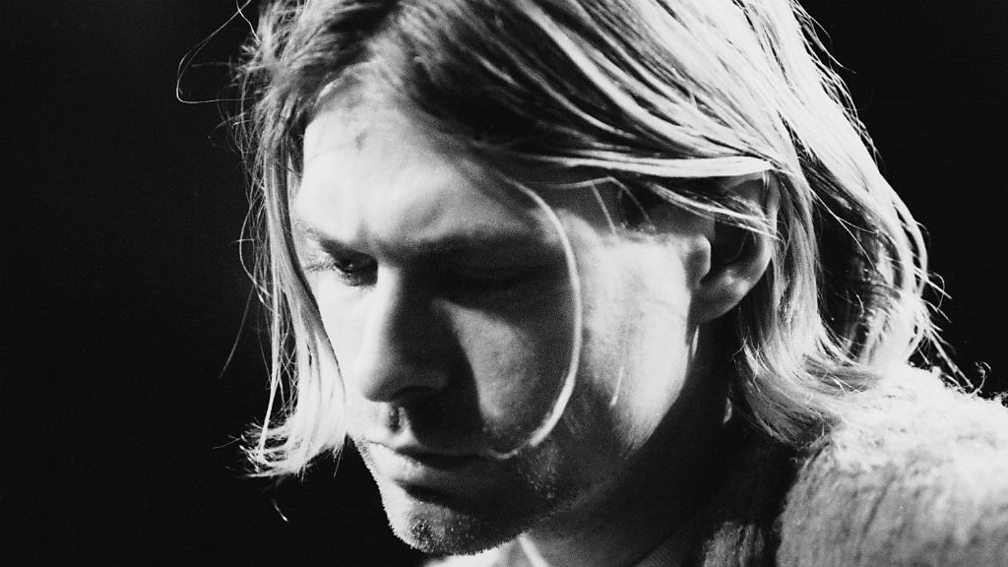 Guns N' Roses were a huge band right up until the Use Your Illusion tour ended in Buenos Aires on 17 July 1993, but much had changed in American rock since they started out in the mid-80s. Grunge and the riot grrrl scene blew up in 1991 and the release of Nirvana's Nevermind in September that year dated Gun N' Roses almost overnight. One day, the biggest rock star in the world was Axl Rose, widely considered to be a sexist; the next it was Kurt Cobain, a self-identified feminist.

Seismic, overdue cultural change was happening in America, and as anyone who has seen the recent Nirvana documentary Montage of Heck knows, Cobain relished mocking Axl Rose and Guns N' Roses, who he called an "establishment" band - a giant insult.

6. They're a decade too late for the 80s revival 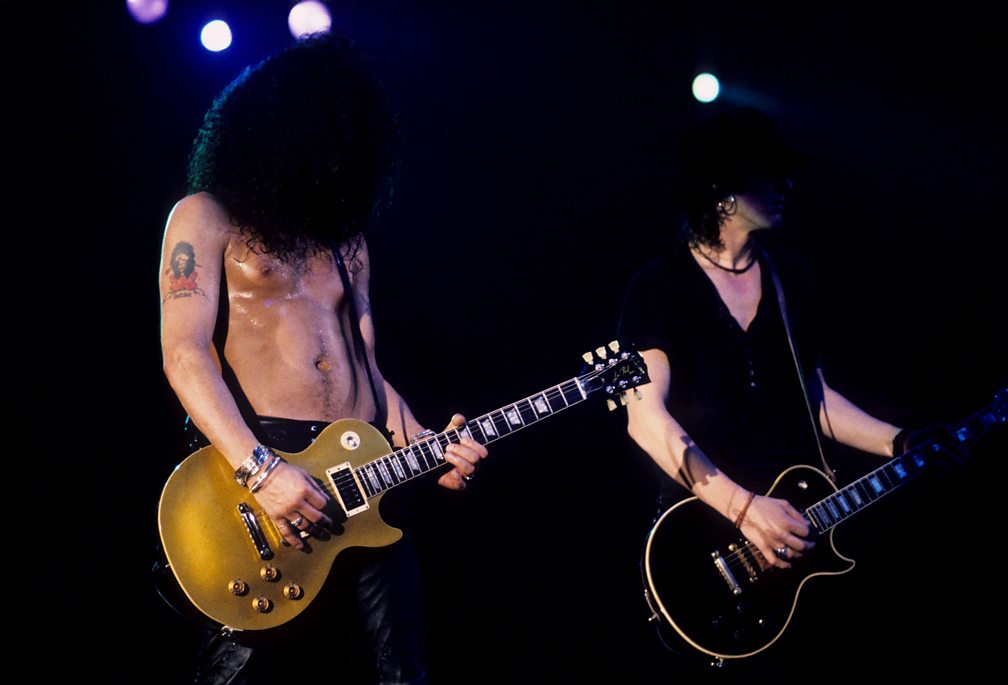 Much has been written about revival culture in recent years, not least by author Simon Reynolds in his 2011 book, Retromania: Pop Culture's Addiction to Its Own Past. A year before that, he wrote an article for The Guardian, The 1980s revival that lasted an entire decade, explaining how music in the 2000s was often deeply inspired by sounds from two decades previous, which is perhaps an on-going cycle.

Would the Guns N' Roses reunion have made more sense if it had happened 10 or 15 years ago? The success of bands like The Darkness in the early 2000s suggests there was still an appetite for glammed-up heavy rock, and we were less suspicious of bands reforming back then. When Pixies reunited and played Coachella in 2004, Radiohead insisted the band play above them on the bill as headliners and nobody minded.

Ice Cube is billed as playing before Guns N' Roses at Coachella and he's been talking about that performance being an N.W.A reunion show, following the success of the Straight Outta Compton film. Perhaps we're about to enter an 80s revival, part II.

7. No one has any truck with lateness in the social media age 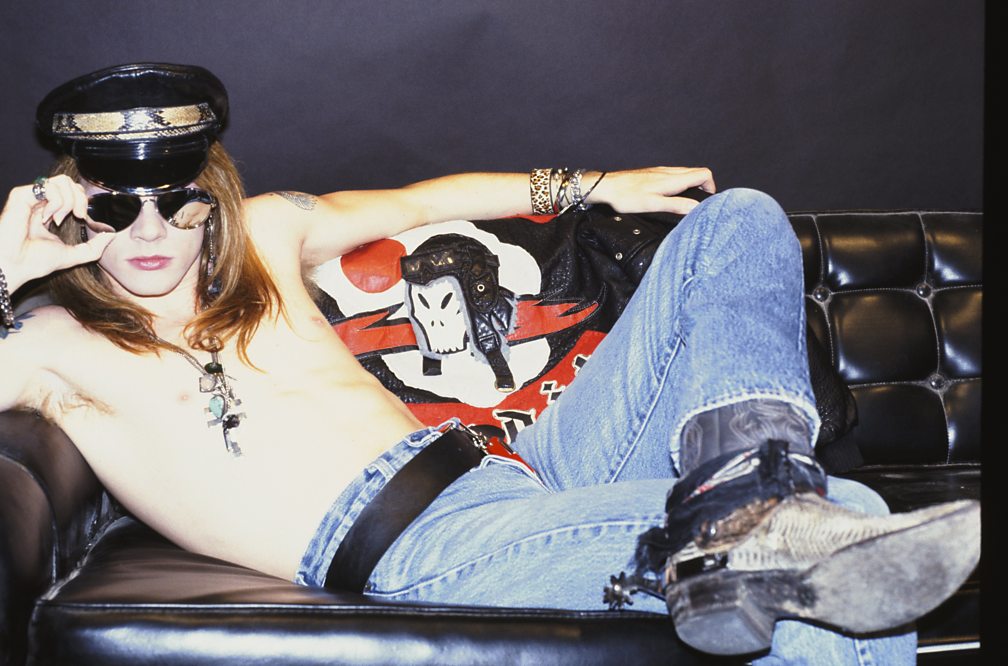 Famously, Axl Rose is always late. It's just part of who he is. Will that wash in our age of instant gratification? No chance.