A celebration of 'the quiet one' in your favourite bands 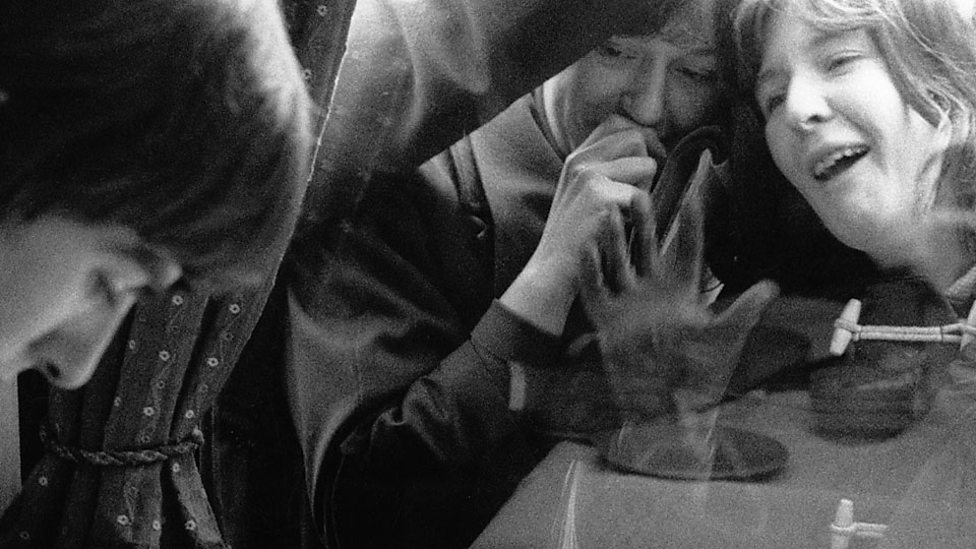 It is, as they say, always the quiet ones you should watch out for. Every decent band has a member whose role is to stand slightly out of the spotlight, looking thoughtful while their colleagues wave to the back row. Sometimes they are there to make the more naturally showy members of the group look better, sometimes they're the secret talent and they don't feel the need to point at themselves all the time.

There are two versions of George Harrison that seem to exist concurrently in the public imagination. He's the most thoughtful and spiritual Beatle; the one who was least impressed with the global hoo-hah the band created, and the one who most valued keeping everyone at arm's length. You can hear his natural reticence to get carried away in the above clip, from the band's first trip to New York. Contrast Paul McCartney's dazzled enthusiasm for their overwhelming public reception with George's faint weariness about playing "the usual ones" on the Ed Sullivan Show.

But there's also the exceptionally busy and popular man profiled in Martin Scorsese's documentary Living in the Material World, the Formula 1-loving Monty Python fan (and financial backer) who invented Live Aid with his 1971 Concert for Bangladesh and co-wrote songs with Bob Dylan, before forming the Traveling Wilburys with Bob, Jeff Lynne of ELO, Tom Petty and Roy Orbison. He was no shrinking violet, in other words. Or as he put it in this interview: "If I am the quiet one, then the others must have been very noisy indeed!”

Kraftwerk aren't just hugely influential in the development of synthpop, they are also, in their self-effacing robotish way, responsible for a new breed of pop star that arrived in the early 80s. Synth duos, by pop law, had to feature one extravagant lead singer, pouring their heart out, and one bookish individual who appeared to be lost in contemplation as they'd stab a worried finger at their keyboard. A generation of quiet ones was emerging.

Soft Cell had Dave Ball, Blancmange had Stephen Luscombe and Eurythmics had Dave Stewart. Bronski Beat even had two quiet ones (Steve Bronski and Larry Steinbachek). But the king of them all remains Vince Clarke, who started out as the quiet one (and resident songwriting genius) in Depeche Mode, then became the quiet one in Yazoo, then the quiet one in The Assembly and finally the quiet one in Erasure. And he didn't make a fuss about any of it.

While Queen were in their pomp, one of the most interesting things about them was that all four members were perfectly capable of writing big hit singles. John Deacon wrote at least three of their best - Another One Bites the Dust, I Want to Break Free and You're My Best Friend - while standing in the shadows next to Freddie Mercury's piano, never singing a note and letting the other members of the band take the limelight.

After Freddie died in 1991, John flexed his quiet one muscles and elected to leave music, save for taking part in business decisions regarding the band. So while Brian May and Roger Taylor brought in guest vocalists - Paul Rodgers, Adam Lambert, even Five - John merely kept himself to himself and an eye on the bottom line. Brian recently admitted to Rolling Stone that they don't really see him any more, adding: "He still keeps an eye on the finances, though. John Deacon is still John Deacon. We don't undertake anything financial without talking to him."

Chris's job is often to stand to one side of Neil Tennant, indulging his lyrical flights of fancy and looking slightly put out. He has the demeanour of someone who doesn't really want to be there, but doesn't trust his partner to bring the company laptop back without spilling wine down the keypad. That's black belt-level quiet one-ing.

And he is quite sniffy about the whole fame business too, preferring to dance his troubles away in clubs rather than bare his soul for the tabloids. He told The Atlantic: "It’s a very difficult thing to do, to promote a record, do television shows, and to still want to remain private, it’s really quite difficult to explain to people what you’re trying to do. I mean I’d actually quite like to be a recluse, but you know, you’ve got to promote the record as well."

Jeff may have insisted that Slayer rev up their extreme metal with the brutal energy of hardcore punk, but he was by all accounts, a very quiet individual, and he rarely gave interviews. Of course this may also have been because he was in a band with motormouth Kerry King. It must've been murder to get a word in edgeways.

In fact, Jeff was so quiet that when he was recovering from the necrotising fasciitis that forced a break from the band, he just vanished off the map, as Tom Araya told Guitar World: "He was a hard person to talk to. When he disappeared, he wouldn't answer calls or return texts."

So it's hard to know whether he'd be pleased that there's a Polish roundabout named the Jeff Hanneman Circle Pit (as revealed above) in his honour. Maybe the quiet carriage on a cross-country train would be more apt.

And then there's this fellow, who appeared to be so poleaxed by the constant three-ring circus around One Direction that he looked visibly unhappy for weeks, provoking endless tabloid rumours about his future in the group, before he quit in order to be free of it all. As he told reporters in March 2015, Zayn wanted to live his life "as a normal 22-year-old", and not tour the globe as a pop star. And who can blame him?

Almost immediately, he began work on the music for his debut solo album Mind of Mine, released recently on RCA records (there's a potted history above, if you want to catch up) in order to further his career as, well, a pop star. On the quiet one scale, this puts him on a par with George Harrison in 1966 (just when The Beatles quit touring but kept recording), but evidently he has no intention to go the full John Deacon in 1991 just yet.

Slipknot on why they wear masks - Artsnight: Preview - BBC Two

Arguably a band entirely comprised of quiet ones, given that they all hide behind masks, Slipknot have their very own extra-quiet one, in the form of Craig Jones, otherwise known as The Silent One, The Killer, #5 or 133 MHz. Craig is the one in the band whose mask looks like a pin cushion, and his job is to provide samples, speeches and noises as a kind of audio garnish in the band's dark maelstrom.

Offstage, he's fittingly hard to pin down, having been interviewed very rarely and to very little effect. In fact his most notable public quote thus far is, "If I wasn’t in this band, I’d probably be out killing people," which earned him the nickname The Killer. He did also say, "If I wasn’t in the band today, I’d be driving forklifts in a warehouse all day long," but, as yet, no one has offered to call him The Forklifter. Not that he'd say much if they did.

John Entwistle, The Who

When your guitarist spends his time leaping about the stage, your drummer plays all of his kit at once and your singer has to spin his microphone around his head just to get some attention between screams, unless you're juggling chainsaws, you're going to be considered the quiet one. And so it was for John Entwistle in The Who, especially as he stood still and glowered at the audience and took a back seat in the band's interviews.

It's an especially ironic title in his case, given that his rolling, dexterous bass lines always took up slightly more than the allotted space one might expect, including an immortal bass solo in My Generation. He even wrote a song about the situation called The Quiet One, which appeared on the band's 1980 album Face Dances. In the album's liner notes, he explained he wrote the song because, "I'm not really quiet. I started off being quiet and that's the pigeon hole I've been stuck in all these years."