Plenty of tennis players have fancied themselves as pop stars. John McEnroe has jammed with Springsteen and Santana, as well as joining fellow ex-pro Pat Cash - along with The Who's Roger Daltrey and two members of Iron Maiden - in one-off charity supergroup The Full Metal Rackets. Jimmy Connors sang on a Lionel Richie album. Both Serena Williams and Andy Murray have tried their hand at rapping, while former French Open champion Yannick Noah even crossed the line permanently, releasing a string of reggae albums, including a couple of million sellers (in France).

But when the tennis shoe's on the other foot, which singers can hit a mean cross-court forehand? Our list of tennis-playing pop stars may serve up a few surprises… 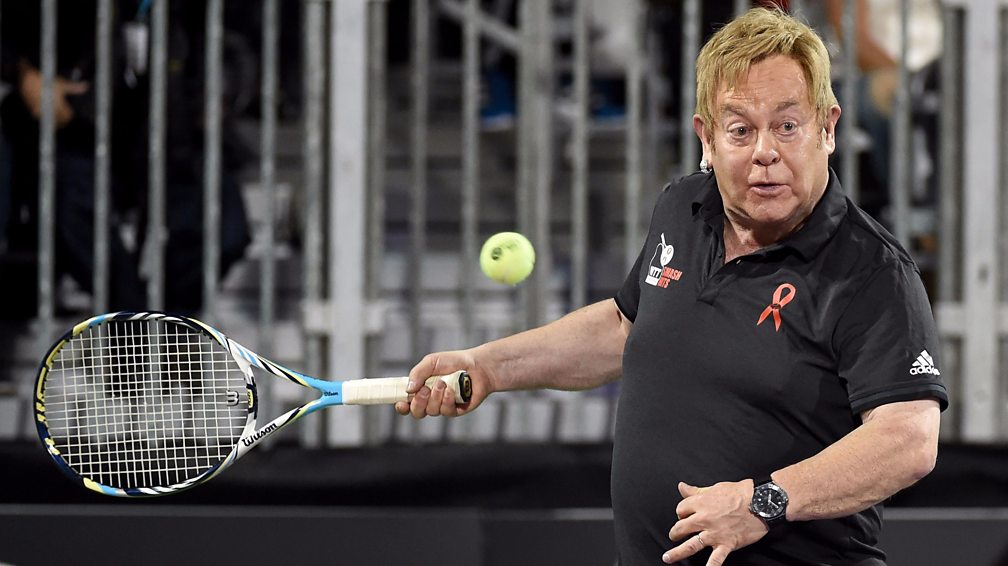 Sir Elton's love of Watford FC is well-known, but he's an equally big tennis nut. A lifelong friend of Billie Jean King, his 1975 single Philadelphia Freedom was a tribute to her pro tennis team of the time. Since 1993, the pair have hosted the annual WTT Smash Hits charity tournament, often partnering up to play doubles together. At last year's event, held at Caesar's Palace in Las Vegas, Elton teamed up with Martina Navratilova for a narrow defeat to Maria Sharapova and Andy Roddick.

Drake certainly loves sport. Rarely an NBA fixture goes by without the rapper trying to gatecrash the pre-match huddle of whichever team he's supporting that week. But Drake's also been spotted watching baseball, football, ice hockey, American football, even polo. And, of course, tennis. From 2011 onwards, Drake was often seen chilling in the VIP box wherever Serena Williams was playing, including when he cheered her on to victory at Wimbledon 2015. Were they dating or did they just enjoy hitting a few rallies from time to time? "Tennis matches at the crib," he rapped on Worst Behavior, at pains to underline his own on-court credentials. "I swear I could beat Serena when she playin' with her left..." 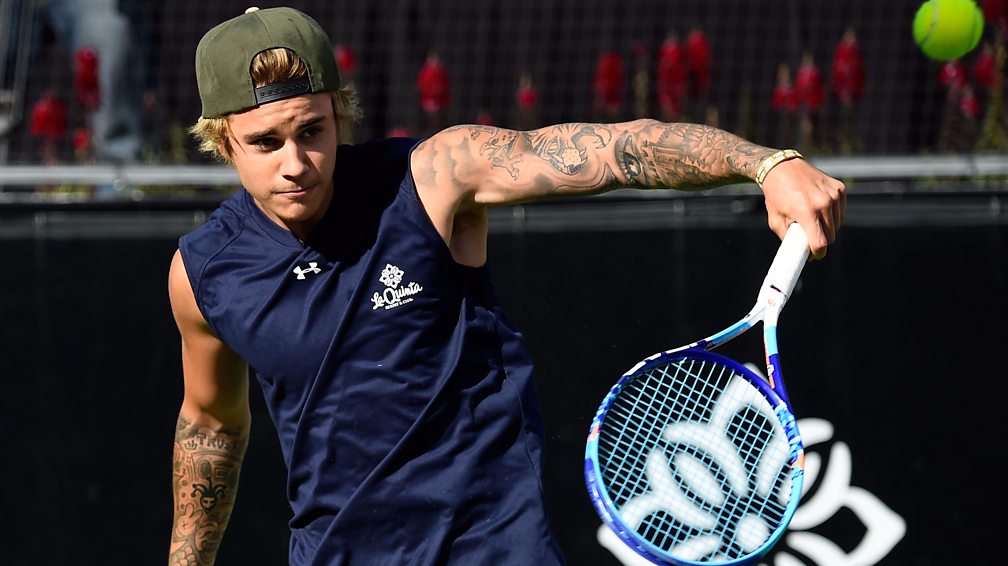 As Shakira made clear, hips don't lie - and the Colombian singer uses hers to swivel and hit a series of unstoppable volleys in this tennis training session she shared on Instagram. She may have picked up a few tips from her pal Rafael Nadal, who smouldered through the video to Shakira's 2010 song Gypsy. 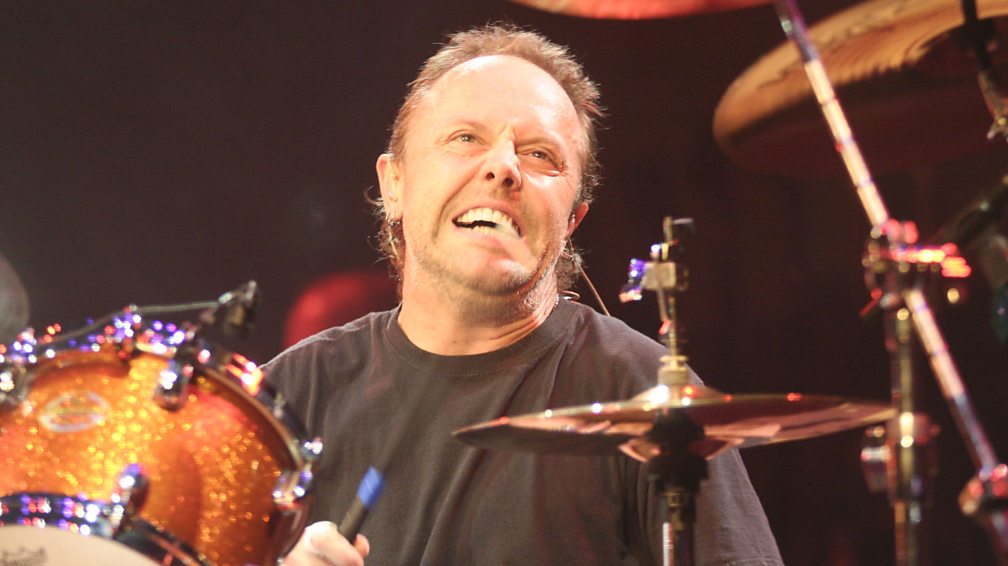 Born into a tennis-playing dynasty - both his father and grandfather represented Denmark in the Davis Cup - Lars Ulrich was destined to follow in their footsteps, until a move to California aged 16 set him on a different path. "In Denmark I was ranked high enough to be one of the best tennis players in the country," he told Jonesy's Jukebox. "But when we came to Newport Beach... I wasn't one of the best 10 tennis players on the street that I lived on!" Luckily there was another profession into which Ulrich could transfer his skill for wearing headbands while hitting things really hard, and he became the drummer for Metallica. Other metallers with a penchant for tennis include KK Downing and Glenn Tipton of Judas Priest. 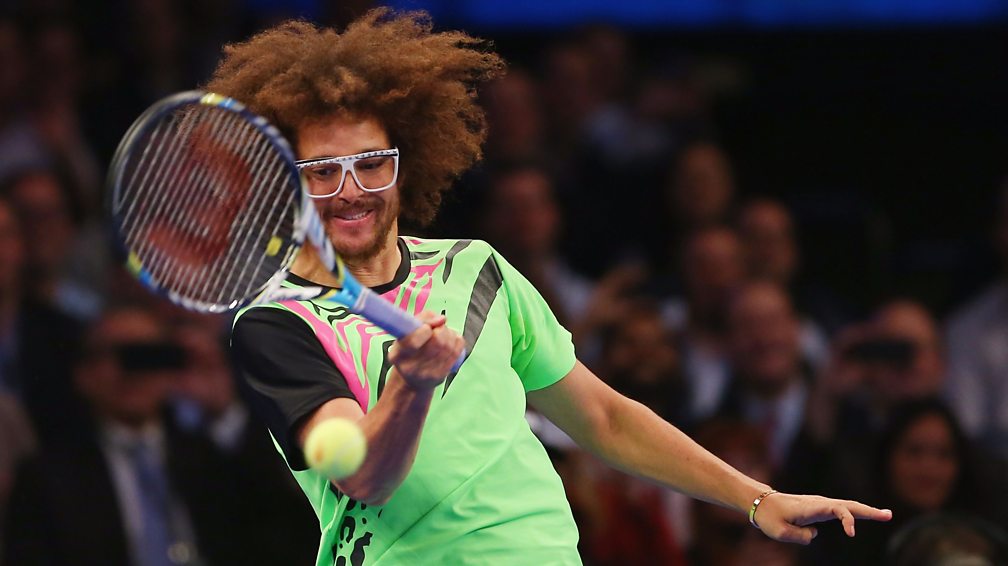 The Sexy and I Know It star caused much excitement among Wimbledon commentators in 2013 when he turned up in the players' box, sporting his trademark comedy specs. At that point he was dating former World No.1 Victoria Azarenka, but Redfoo - real name Stefan Gordy, son of Motown founder Berry - fancies himself as a bit of a player in his own right, having had a promising junior career cut short by injury. In 2013, he tried to qualify for the US Open by entering the USTA Northern California Sectional tournament but was knocked out in his first match, losing 6-1, 6-2. Undeterred, he and doubles partner Chris Wettengel later received a wildcard entry into a genuine Pro Circuit tournament but ended up on the wrong end of another straight-sets thrashing. In a Grantland article, Redfoo says his aim is to keep trying until he wins an ATP World Tour point. 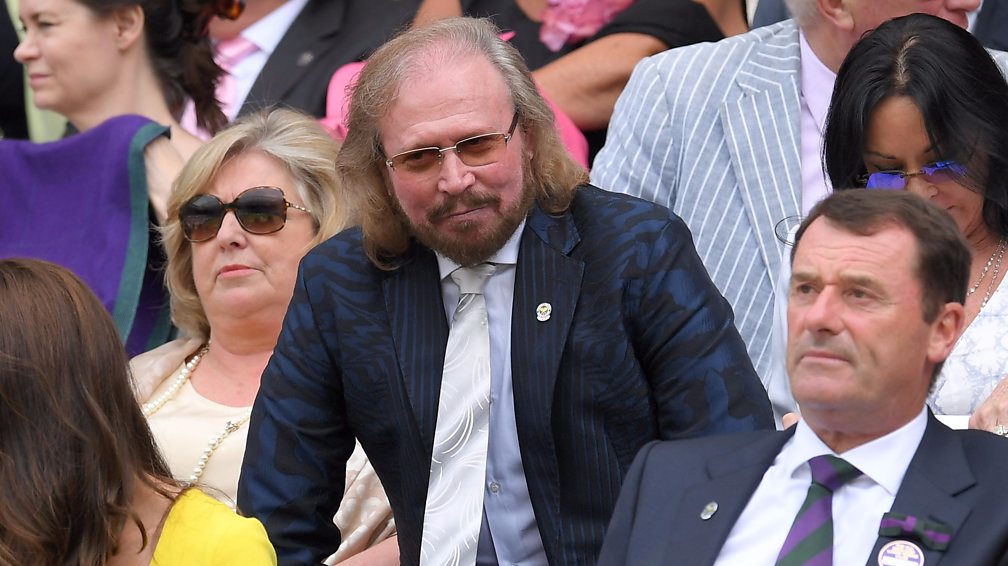 Having recently played a blinder at Glastonbury, it would be no surprise to see the last surviving Bee Gee enjoying the rather more sedate surroundings of Wimbledon's Centre Court this week, as he has done several times before. Back in the day he was a regular on the pro-celebrity tennis circuit, where his beard and headband combo gave him the look of a young Björn Borg. However, he hadn't quite mastered Borg's technique - footage from a Florida tournament in the mid-80s shows Gibb persistently fluffing his serve as his doubles partner Martina Navratilova tries hard not to bawl him out. In they end they lost narrowly to Chris Evert-Lloyd and Robin Thicke's dad Alan. Gibb went on to host several editions of his charity fundraising Love & Hope Tennis Festival, where fellow celebrity hitters included David Soul and Sonny Bono. 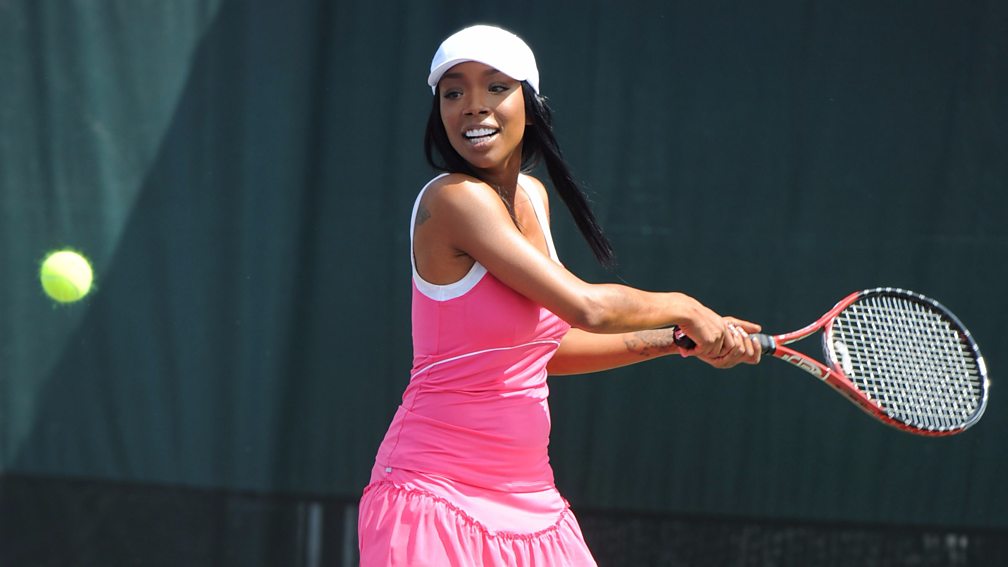 The R&B singer best-known for her 1998 hit The (Ball) Boy Is Mine is also an accomplished tennis player. Pictured here during an exhibition match at the 2011 Sony Ericsson Open in Florida, Brandy reportedly held her own against former World No.1 Jelena Jankovic. 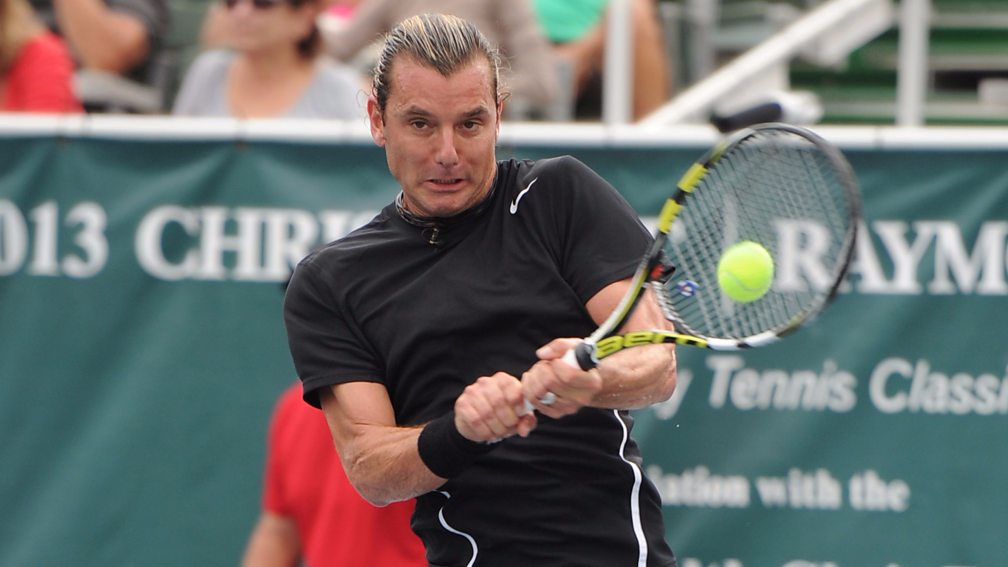 The Voice judge and Bush frontman is a regular in Wimbledon's royal box, due to his friendship with Roger Federer. But Rossdale plays a bit too. As with his musical career, he's busier in the States than over here, becoming a regular at Chris Evert's pro-celebrity tournaments in Florida. 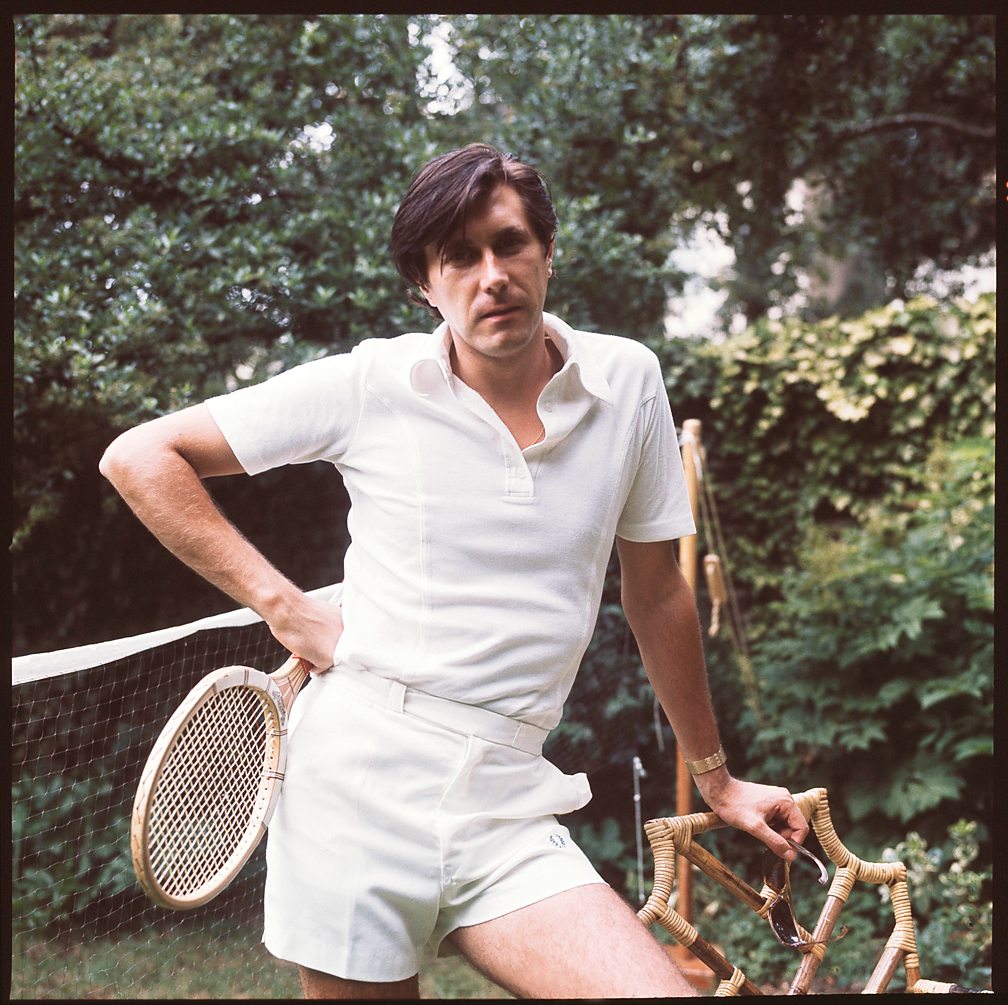 Never has a man looked classier in tennis whites than Roxy Music's Bryan Ferry. And they're not just for show - Ferry has said that his perfect weekend involves a game of tennis before lunch with one of his children, while Esquire confirms he possesses a "mean backhand slice". 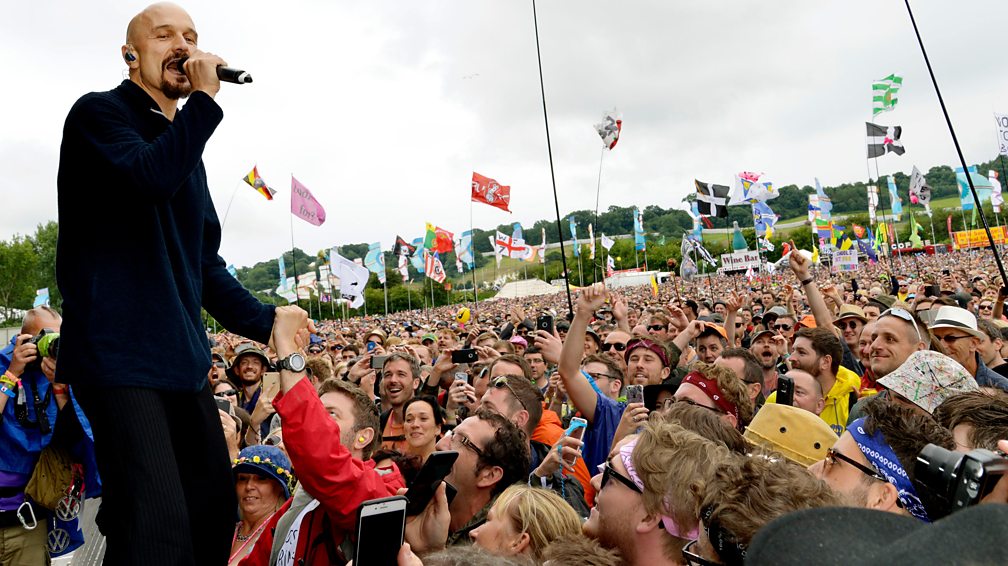 In an interview with the LTA website, the frontman of veteran indie combo James outs himself as a former tennis prodigy. "I played at schoolboys junior Wimbledon when I was 17," Booth reveals proudly. "We got knocked out by the winners, but got more points against them than anyone else." Other unlikely big servers from the indie world include Sonic Youth guitarist Lee Ranaldo, who once caused his band to cancel a tour after he broke his wrist playing tennis.

Okay, so there's no evidence that Skepta actually plays tennis. But he was spotted at Wimbledon with Drake in 2015, and here's a clip of him playing 'pie tennis' with Matt Edmondson on Radio 1. Until he turns up aceing Greg Rusedski at one of those pro-celebrity tournaments, that will have to suffice. Lose on a tiebreak? That's not me.