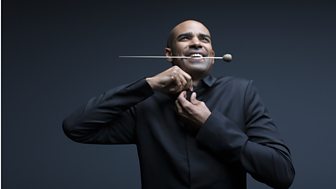 Chineke!'s story is one of the most inspiring in music right now. The UK's only majority black and ethnic minority orchestra was formed just two years ago by double bassist Chi-chi Nwanoku. It received a standing ovation at its debut concert before even playing a note, creating a moment that Chi-chi will never forget: "Tears were falling down people's faces." 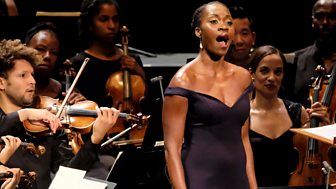 To celebrate the night, we met a handful of the orchestra's members. It turns out they have stories that are just as inspiring as Chineke!'s own. From growing up in apartheid-era South Africa to being forced into music by a pushy mum, there is something below that everyone can relate to. 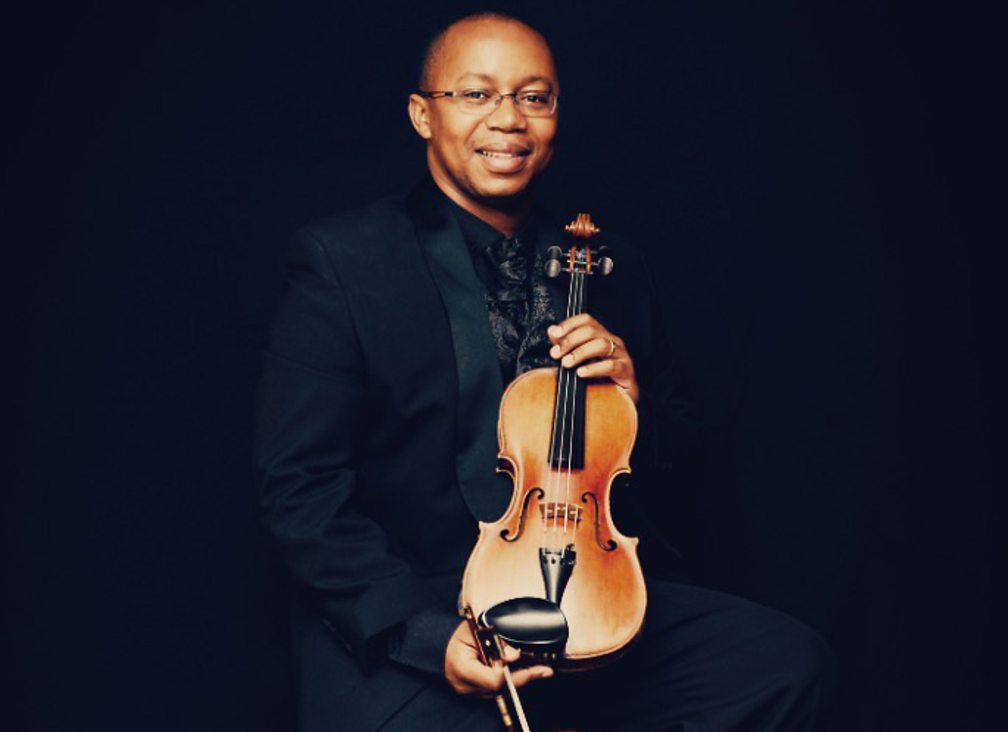 "I was born in Soweto in 1984, so I remember the end of apartheid. My circumstances then, although typical for Soweto, were not the most pleasant. I lived in a shack that was at the back of my great-grandmother's house, and she rented a room for a shabeen [bar], so there were a lot of people around.

"I never had any idea I was poor. I was 10 years old; I had everything I needed! I didn't have a bed - I had to sleep on the floor - but many people I knew slept on the floor.

Music transforms and it transcends racial and ethnic boundaries

"I still have memories of gunshots through the night and what we called 'stay aways' where we couldn't go to school. Music was an escape in a sense. There was a music project around the corner, the African Youth Ensemble, and I desperately tried to enrol myself. But I was unsuccessful, so I just said, 'I'll find a way.' One day I managed to get into the room and just picked up an instrument and stood there, and the guy running it said, 'Where do you come from?' That was it, really.

"Very quickly after that we started playing all over the place. We just started getting better with tuition, rising with time. I suppose it goes into the spirit of Chineke!, because music transforms and it transcends racial and ethnic boundaries.

"I played for Mandela many times. The most amazing thing about him was that he always had time for everybody - it was almost like the idea of time stopped with him. Oh, and he was never late."

Music transforms and it transcends racial and ethnic boundaries 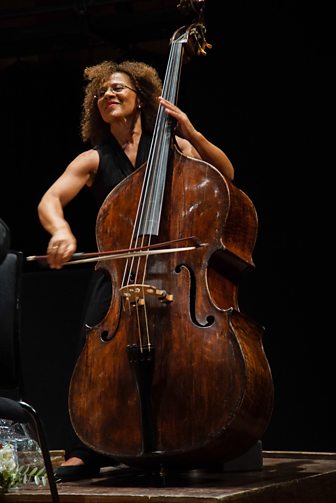 "I took up the double bass in my last year of school after this devastating knee injury ruined my sprinting career. I was doing 11:8 seconds for the 100 metres. And I was 17 then, so I was definitely heading for the Montreal Olympics [three years later in 1976].

"I was in hospital for two weeks and the day I limped back into school, the head of music came up to me and said, 'Chi-chi, you're probably the most musically gifted person in the school, but you're the only one who doesn't play in an orchestra. We think that if you took up a very unpopular instrument, you could have a career.' And he led me to this room where they had two double basses and that changed my life.

"I do have to thank [politician] Ed Vaizey for me starting Chineke! in a way. He said to me, 'Why is it only you that we ever see on stage?' and it took me a while to realise he meant musicians of colour. He planted the seed in my head.

"I went to see the Kinshasa Symphony [at the Southbank Centre in London, 2014] and seeing people's faces looking bemused, or with incredulity, I thought, 'No, this is wrong. This is the 21st century. It shouldn't be a novelty that this is one person of colour on stage playing Beethoven.' And, as I walked back to Waterloo station, I looked to my right and left and thought, 'I should do this.'

"I can't tell you what piece I'm most looking forward to at the Prom, but we're playing some George Walker. He's incredible - the first African-American to win the Pulitzer Prize for music. He went to Oberlin College in Ohio, the only black student in his time and he was segregated because of it. They all lived in dorms together, but he wasn't allowed to live with them. It's painful. It's been his lifetime's dream to have a piece at the Proms and I've managed to raise funds for him to come, but unfortunately one of his legs is playing up and his doctor said no." 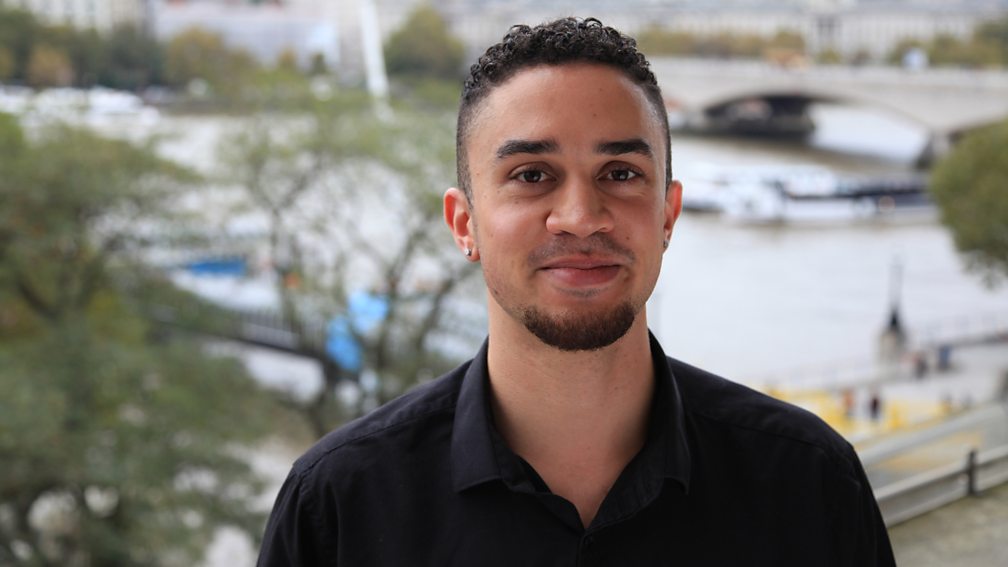 "I think when my teacher got me to play the bass, she thought I'd get into jazz, but there weren't too many people my age at school [in Leeds] who were playing that kind of music, so I did the usual thing - went to youth orchestra.

"And because there was never anyone else playing the bass, I got quite far, quite quickly. I was constantly being chucked into situations a little bit out of my depth, so I had to find the standard.

"I didn't have a sort of magical revelation - an epiphany moment [when choosing the bass]. I think I just preferred the role it plays, more in the background. I don't need to be in the spotlight with my name on the poster. My brother's a musician too and I think he's like me - we both just do it as we love playing music." 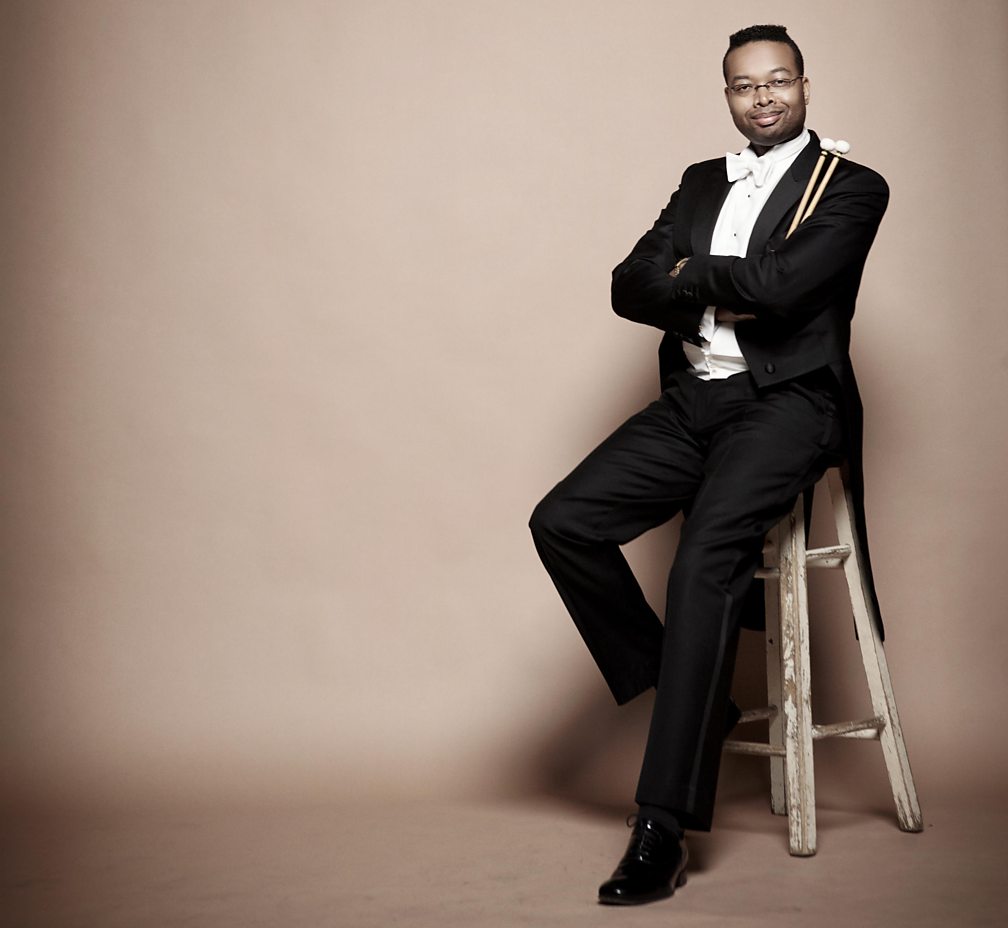 "When I was a child, singing came very naturally to me. Playing musical instruments did not. It took me quite a while to find an instrument that worked.

"I went to the Purcell School and I distinctly remember an interview with the Director of Music where he said, in no uncertain terms, 'This is a specialist music school, and you don't seem to be specialising in any instrument.' They were considering introducing percussion and he asked if I'd be interested, and of course I was.

"I went home and begged my mum to let me try this new percussion thing. But at that stage she'd spent money on two different violins for me; she'd bought me a clarinet; she'd spent a lot of money on tuition. But I promised her, all she would need to buy me was three books, a pair of sticks and a practice pad, so she relented and the floodgates opened. I found my groove, so to speak.

The gates of heaven opened, God looked down and said, 'Thou shalt be a timpanist!'

"I'll forever owe my mum more than I can pay. She worked very, very hard to make that happen. She was a nurse at the time, but she'd do other odd jobs and whatnot. My father wasn't really present nor helpful. He paid the minimum he needed to in terms of child support, so it was all down to her.

"The timpani sounds exciting. There's something about having shafts of wood in your hands and hitting things that is going to be appealing to young boys - not to be sexist. And my first lesson, the feel of the instrument and the way it responded when I struck it… I've always described it as, 'The gates of Heaven opened, God looked down and said, 'Thou shalt be a timpanist!'"

The gates of heaven opened, God looked down and said, 'Thou shalt be a timpanist!' 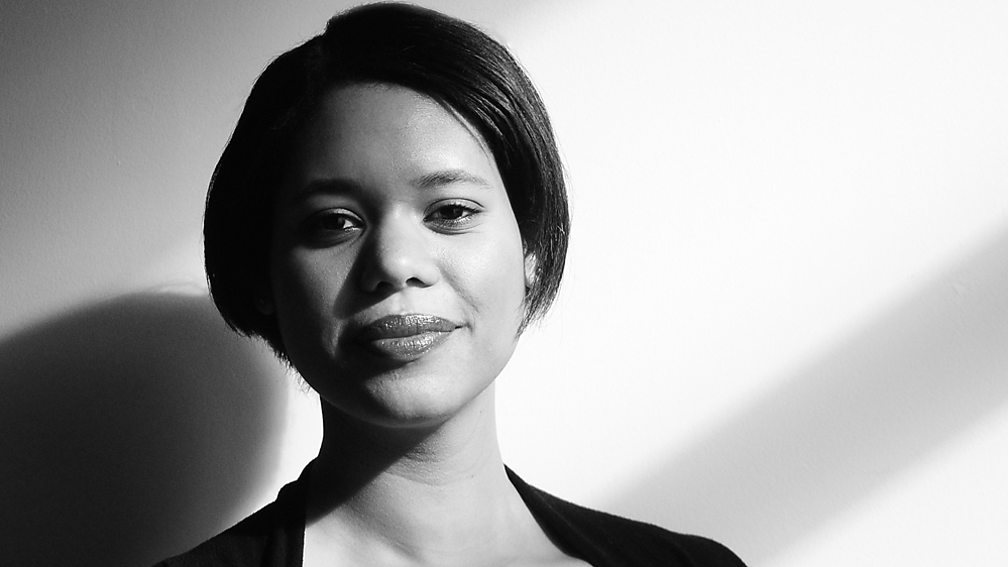 "This is a huge thing. I'm a Londoner so my earliest memories of experiencing classical music live were at the Proms. I must have been seven maybe when I went to my first, but I'd never have dreamt of being performed at the Proms. It's... crazy. And being performed by Chineke! as well. That's such a huge privilege. I love how they've dispelled all the myths one might have about who goes to classical concerts, who performs classical music, and who writes it.

"How'd I become a composer? I'll tell you the truth. I was at university, majoring in singing, and they changed the credits so I needed 10 more to graduate. That was the number they allocated for composition. I took to it straight away. I just found composing incredibly liberating. You're stepping into the unknown. Anything's possible. It's exciting, captivating.

"I spoke with Chineke! when they commissioned me and they were really keen for something that was bright and energetic and celebratory, it being their debut Prom. It's inspired by a poem by Lemn Sissay. I was reading his latest collection and The Spark Catchers just stuck out as something that'd be appropriate.

"The poem's actually about the women who worked at the old Bryant & May match factory in East London that used to be on the borders of what's now the Olympic Park, and the match girls going on strike due to labour conditions. It was a huge thing at the time. Their stories are about revolution, standing up for your rights and being bold and courageous, and that's who I am as a person." 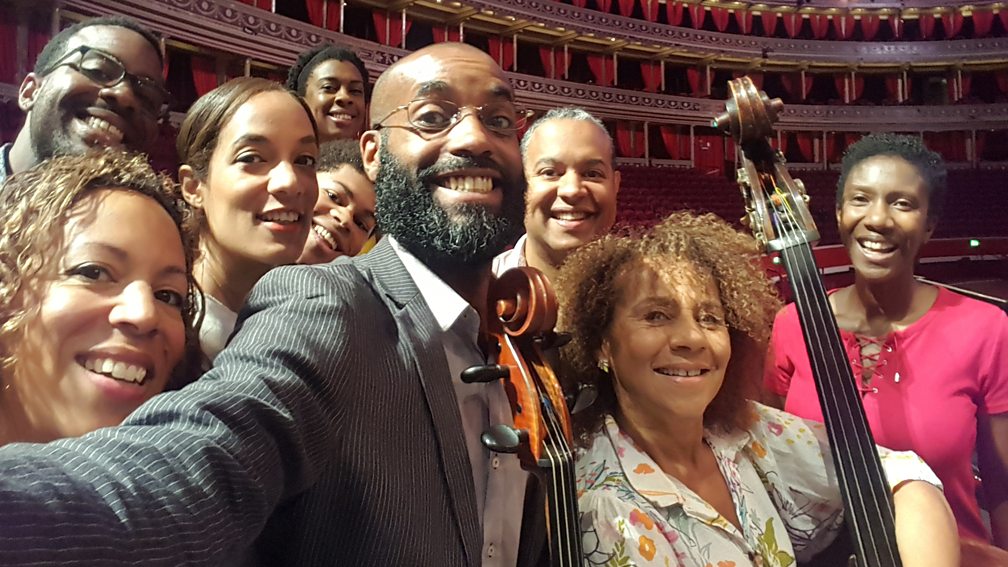 "I once had a 500-year-old cello, but had to give it back unfortunately. My current one was made in 1874 and it's a beautiful thing. Made by this Frenchman who was working in London, Charles Boullangier. For me, having an antique makes a lot of difference. It's kind of difficult to explain without playing it, but it's not just the sound - it's knowing the history, knowing it's been played and cherished for so long, and that all you're doing is looking after it on its own journey.

"It's insured for £40,000 and I'm pretty careful with it. I don't let anyone other than cellists touch it. I wouldn't ever leave it with a brass player - not that I have anything against brass players, but one lapse of concentration and it's toast.

"Some of the best instruments are nicknamed after the most famous people who play them. I doubt very much mine's going to be named after me, but I hope it'll go on to someone who could give it a name.

"It was my mum that bought me a cello. She said she had a surprise when I got home and I thought it'd be a bike or sweets, but it was a cello. She loved classical music and she put instruments in every one of her child's hands. She said I had long arms, so it was either this or the trombone. I'm glad she picked the cello."

"I remember my first experience watching the Proms so vividly. We had this atrocious peach-coloured carpet in the front room, my mum was sat behind me and we were flicking around the channels. None of my family were interested in classical music, so I could only have it on for snippets, but I played the oboe and wanted to see other people playing it. I remember watching three nights consecutively and just having this realisation from not seeing anybody else who looked like me, then turning around to my mum and saying, 'Maybe I shouldn't be doing this. I haven't seen any black people.' And her actual words were, 'Well, you bloody well make sure you're the first.' Of course I wasn't the first at all, but…

"I think at the concert I'll be - excuse my language - s******* myself. I've always had goals to reach, from competitions back when I was younger to getting my grade eight, to getting into music college and getting a professional gig. And one of the things on my list was to play the Proms, so I'm going to be quite nervous.

"But it's a great orchestra to play with. I go into other orchestras and everyone's there because it's their job. When we've met as Chineke!, however, there is something else - something bigger - uniting us. There's a real buzz, an excitement and it lifts us all."