One of the great things about the Olympics is the way it brings people of different nations together, channelling political tensions into the glory of competition.

Nonetheless, it was a global surprise when Kim Jong-un, leader of the secretive, tightly controlled communist state of North Korea, offered to take part in the Winter Olympics being hosted by its neighbour, South Korea, in February. As part of this token of cooperation - accompanied by the first talks between the countries in two years - a pop troupe from the North could cross the Demilitarised Zone (on foot) to perform at the games, as the Guardian reported. 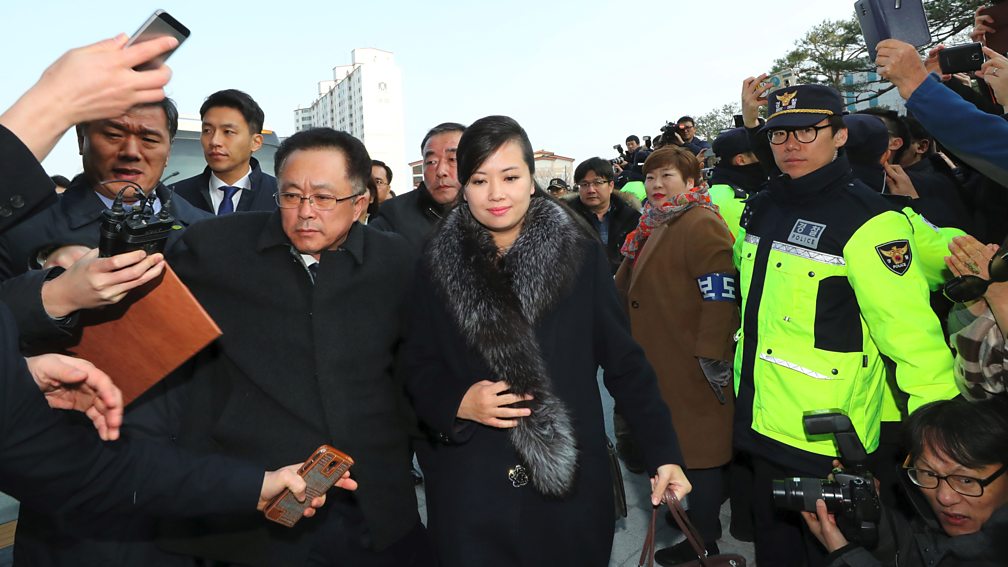 The North Korean delegation sent to discuss these plans included the pop singer Hyon Song-wol (above), who is also a senior official in the central committee of North Korea's ruling Workers Party, a neat illustration of how tightly politics and propaganda dovetail with music in North Korea, where songs are a sparkly vehicle for political maxims and praise of the regime.

Ahead of the world's glimpse of the state of North Korean pop in 2018, here's a selection of stories from one of the world's strangest music industries.

There's an opera character on a North Korean bank note 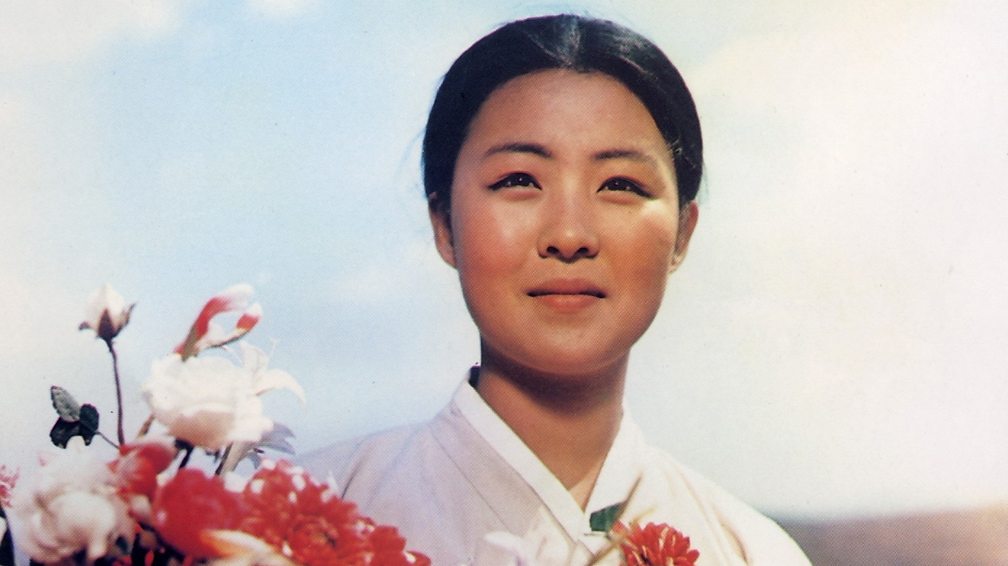 Hong Yong-hee in The Flower Girl

The Mansudae Art Troupe are a sort of light-classical variety group that create opera, dance and music performances. They are said to be successors to earlier collectives the Central Art Troupe (1969) and Pyongyang Art Troupe (1946), though details on either of these predecessors are scant.

The troupe was part of the production of the 1972 "revolutionary opera" The Flower Girl, a tragic story of oppression during Japanese occupation in the 1930s supposedly written by Kim Il-sung, leader of North Korea from its establishment in 1948 until his death in 1994. Adapted into a film starring Hong Yong-hee (an unknown actor handpicked by Kim Jong-il, leader from 1994 until his death in 2011), The Flower Girl is seen as such a key part of North Korean culture that Hong appears as the title character on the one-won bank note.

Mansudae Art Troupe song titles to be found on the internet include On the Road to Fight After the General, The General Decides the Fate of Korea, as well as the alarming 1962 single Our Red Blood Means Victory.

A song is reportedly blared throughout Pyongyang each morning 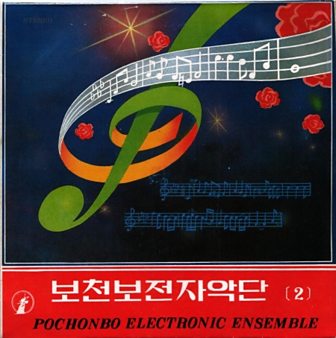 Every morning in Pyongyang, at 6am, according to Vice, citizens are awoken by loudspeakers blaring the song Where Are You, Dear General? by Hyon Song-wol's former group, Pochonbo Electronic Ensemble.

The Pochonbo Electronic Ensemble were formed by Kim Jong-il in the early-80s and were the first North Korean band to use electric guitars, synthesisers and saxophone, drawing on Korean folk music, but also Chinese, Soviet and, to a smaller extent, Western pop. They take their name from the 1937 Battle of Pochonbo, in which a group of guerrillas were led by Kim Il-sung in an attack on occupying Japanese forces (yet, despite this, they have toured in Japan). They've released over 150 CDs, including the North Korean song that is probably best-known, by name at least, in the West - 2005's Excellent Horse-Like Lady (in truth, a less intentionally clumsy translation could probably be found - Wonderful Workhorse Woman?), which celebrates the vim of an admirable socialist factory worker.

Pochonbo Electronic Ensemble's songs were all about translating political ideals into stories people could relate to; according to North Korea travel company Tongil Tours, in 1992 Kim Jong-il issued a directive to state performers that their goal should be "accessible songs that anyone can hum and sing along to, and that embody a philosophy of life and rich emotion". As well as love songs and versions of Korean folk songs, more ideological Pochonbo hits include Let's Defend Socialism (with a music video featuring, at one point, an array of tractors), Thank You, Comrade Kim Jong-il, The Youth Will Support Our Party, We Will Win! and Thunder Over Jong-il Peak.

As for Hyon, it was rumoured she was current leader Kim Jong-un's youthful flame, who his father forbade him to see, but other shadowy sources claimed she was actually Kim Jong-il's paramour. A reminder of the horror underneath all this bizarre glamour came in 2013, when it was reported, such as by the Guardian, that Hyon was among 11 musicians executed by firing squad, her alleged offence making a pornographic video. However, a year later, in a reminder that reports of goings-on inside North Korea aren’t always reliable, Hyon appeared on state television.

The supreme leader's wife may have a pop past 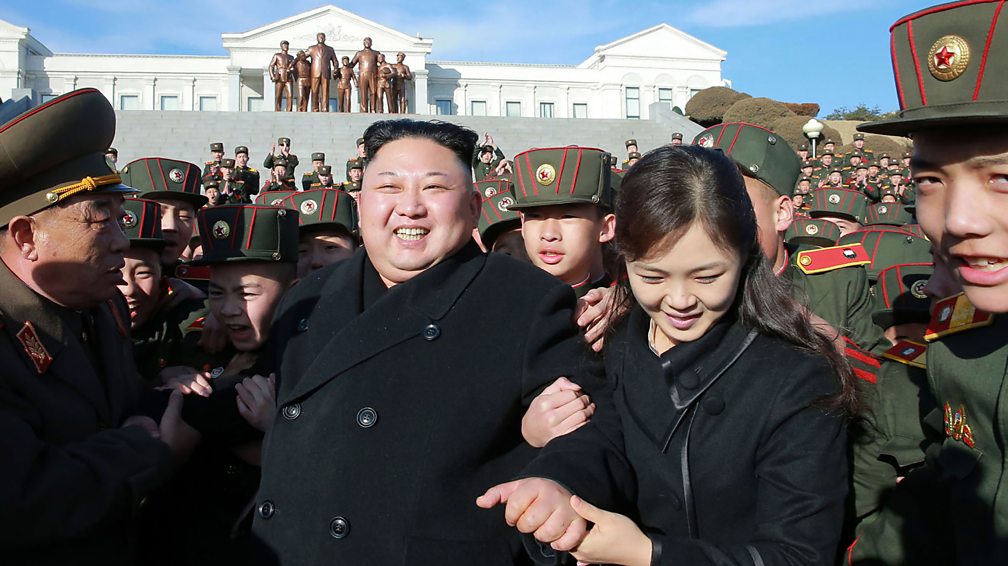 Some believe that Kim Jong-un's wife, Ri Sol-ju, is a former performer with the Unhasu Orchestra, some of whom were also among those alleged 2013 executions. Rumours abounded that the reason for the possibly nonexistent firing squad was to prevent gossip spreading about Ri's past, an accusation the North Korean government fiercely denied, broadcasting a performance by the orchestra on state radio shortly afterwards.

It's also been rumoured that the government are confiscating CDs with Ri singing on them in an attempt to erase her past. As the Guardian reported, no one can be sure about the truth of such reports and many are sceptical, but one thing we can be sure of is that in March 2012, the Unhasu Orchestra and the Radio France Philharmonic performed together in Paris, playing Brahms's Symphony No. 1, Bizet's Carmen, and the Korean folk song Arirang.

Some of their girl bands are military officers 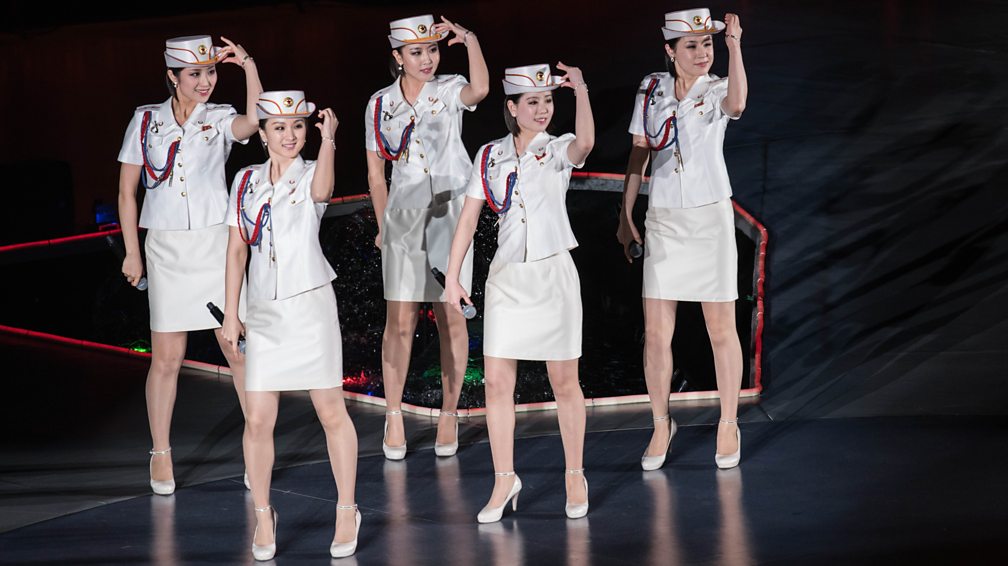 The Moranbong Band were formed by Kim Jong-un and have been described - by Fortune magazine - as "North Korea's answer to the Spice Girls". Yet, although their 2012 debut performance featured Western cultural icons such as Mickey and Minnie Mouse and a cover of My Way, and their adoption of short hairstyles, mini-skirts and high heels indicates a shift in thinking on Western fashion styles, their formation was more a response to the global popularity of South Korean K-pop. Or, as the Korean Central News Agency put it, "Kim Jong-un organised the Moranbong Band as required by the new century, prompted by a grandiose plan to bring about a dramatic turn in the field of literature and arts this year in which a new century of Juche Korea begins." (Juche is the philosophy coined by Kim Il-sung, translated as "self-reliance", or the idea of being master of your own destiny as a nation.)

The Morangbong Band's musical stylings, although light years away from K-pop acts, is the regime's attempt to modernise state-sanctioned culture, moving on from the dated light music styles of the Pochonbo Electronic Ensemble and Wangjaesan Light Music Band to give the people a tiny, diluted bit of what they want. Unlike their South Korean counterparts, however, the Moranbong Band are all high-ranking military officers. Although some Moranbong song titles take a familiar tone (We Can't Live Without His Care, Fluttering Red Flag and the weirdly Stock Aitken Waterman-esque My Country Is The Best!), they're notable among the oeuvre of North Korean music for their relatively apolitical nature.

As the Guardian reported in 2015, among the list of recordings ordered to be destroyed by Kim Jong-un in house-to-house searches to confiscate banned popular culture, was the soundtrack to the film Im Kkeok-jeong, based on the life of a historical leader of a peasant rebellion in the South, and featuring the songs Take Action Blood Brothers and To Get Revenge. Though workers' solidarity is very much an approved theme in North Korean culture, you can see why the government might be uneasy at allowing ideas of insurrection to take root.

Also outlawed was the song Nation of No Tears from TV movie Echoes of Halla (Hallasan, or Mount Halla, is a Korean volcano). But according to Vice, such directives are not 100 per cent successful, with some North Koreans spreading South Korean and Western pop, films and TV through DVDs and USB drives.

In a 2015 Thump article, North Korean citizen Je Son Le described a network of secret underground clubs held in people's houses, where partygoers muffle doors and windows to prevent the sound of forbidden K-pop CDs from leaking outside, or play banned music and films on special DVD players designed to cover their tracks. "Enjoying anything from South Korea is illegal in North Korea," Je Son said. "In the case of a sudden police raid, if we fail to hide the tape or CD in advance, it would be used as an evidence against us."

Being found with contraband culture can come with terrible consequences - there have been reports, including in the Independent, of executions of those caught watching South Korean TV shows. Enjoying uncensored pop music, for North Koreans, clearly takes real bravery. 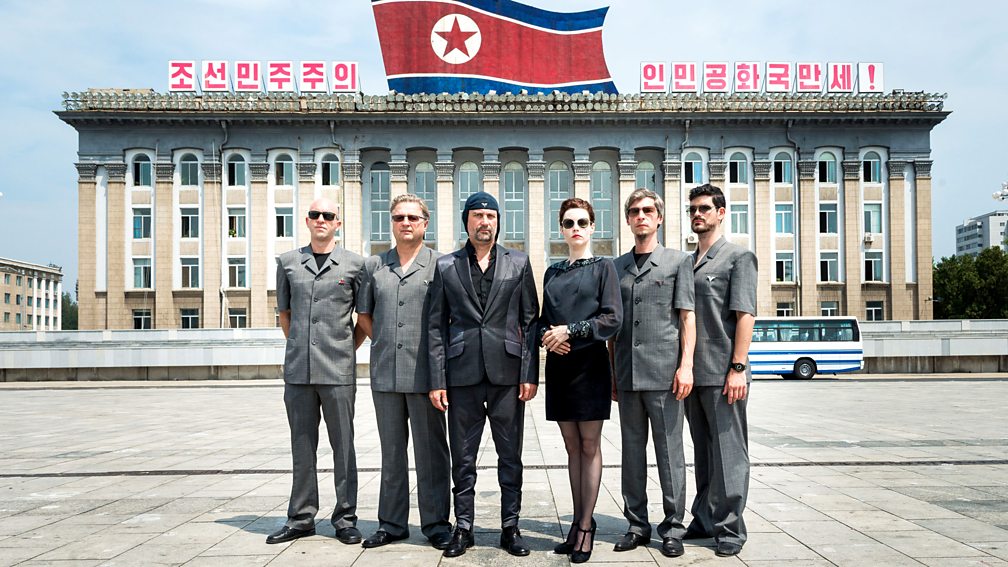 The audience reacted politely, applauding after every song, and they gave us standing ovations… maybe they were happy that it was over
Laibach

Industrial art-metal crew Laibach are Slovenian. But in August 2015 they became, in a very strange turn of events indeed, the first foreign band to perform inside North Korea, their subversion of totalitarian imagery evidently striking a weird chord.

The gigs were the brainchild of Norwegian artist Morten Traavik, who had experience organising cultural exchanges with North Korea. After directing the video for Laibach's The Whistleblowers, he showed his work to his contacts in Pyongyang, resulting in a formal invitation for the band. They performed two sets in the capital's Ponghwa Theatre and Kum Song music school on the 70th anniversary of Korea's independence from Japan, dubbing the shows The Liberation Day Tour. In an effort to not shock their audience too much, as well as their own songs, the band played covers including Edelweiss, Climb Every Mountain and other songs from The Sound of Music, and The Beatles' Across the Universe.

Laibach's Ivan Novak told Rolling Stone that the audience "reacted politely, applauding after every song, and at the end of the show, they gave us standing ovations… maybe they were happy that it was over". After the show, an older Korean man told them, "I didn't know that such music existed in the world, and now I know."

The band were most impressed, however, by the students of the music school who performed after them, saying that they heard "everything from 70s Japan-sounding lollipop beats to experimental electroacoustic, almost Arca-like style of music, performed on electric guitars and synths, in combination with their traditional instruments". Let's hope we'll be hearing from them soon.

The trip was also recorded in a Storyville documentary, When Rock Arrived in North Korea: Liberation Day. In it, Novak paraphrases Leonard Cohen: "There is a crack in every wall… that's where the spirit gets in."

The audience reacted politely, applauding after every song, and they gave us standing ovations… maybe they were happy that it was over
Laibach