7 of the most unexpected meetings between musicians and politicians

"Theresa May dons her dancing shoes in South Africa," ran a headline on BBC News on 28 August, and naturally the scenes of the PM getting down with school children in Cape Town led to countless memes that flew around social media.

Politics and music don't often mix well, or sometimes pop stars meeting leaders feels like a good idea at the time - such as when Noel Gallagher and other Britpop luminaries were invited to 10 Downing Street in 1997 by Tony Blair - but, in retrospect, seems futile. (Noel later said: "Politicians? They're... idiots. They're economists - that's all they are... and I should know, because I've known quite a few of them.")

Usually when politicians and musicians meet, it's for a photo op that tends to benefit the politician more. Other times, it's for political reasons. Nearly always, it's awkward, as this list of unexpected meetings proves... 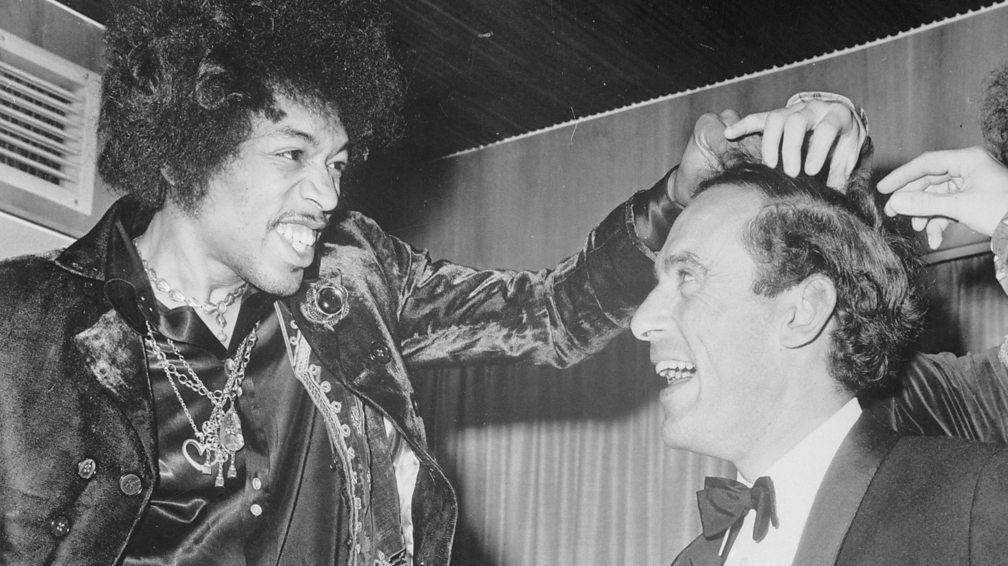 The recent BBC One drama A Very English Scandal, starring Hugh Grant, told the story of the former leader of the Liberal Party, Jeremy Thorpe, the first British politician in history to stand trial for conspiracy and incitement to murder. The scandal arose from accusations made by Norman Scott, Thorpe's former lover, and although Thorpe was acquitted of all charges, questions endured. "Was there an establishment cover-up to protect him during his political career?" asked Tom Mangold in the 2014 Radio 4 documentary Jeremy Thorpe: The Silent Conspiracy.

As controversial as he was charismatic, Thorpe managed to get this photo with Jimi Hendrix backstage at London's Royal Festival Hall in 1967. It's a strange image: the curious ruffing up of Thorpe's hair, Jimi's slightly deranged expression, and the difference in dress - Thorpe is in black tie to Jimi's hippy get-up. As you can see from another shot from the same night, posted on Twitter by the journalist Francis Wheen, Jimi was also photographed showing Thorpe how to play a Gibson Flying V guitar. 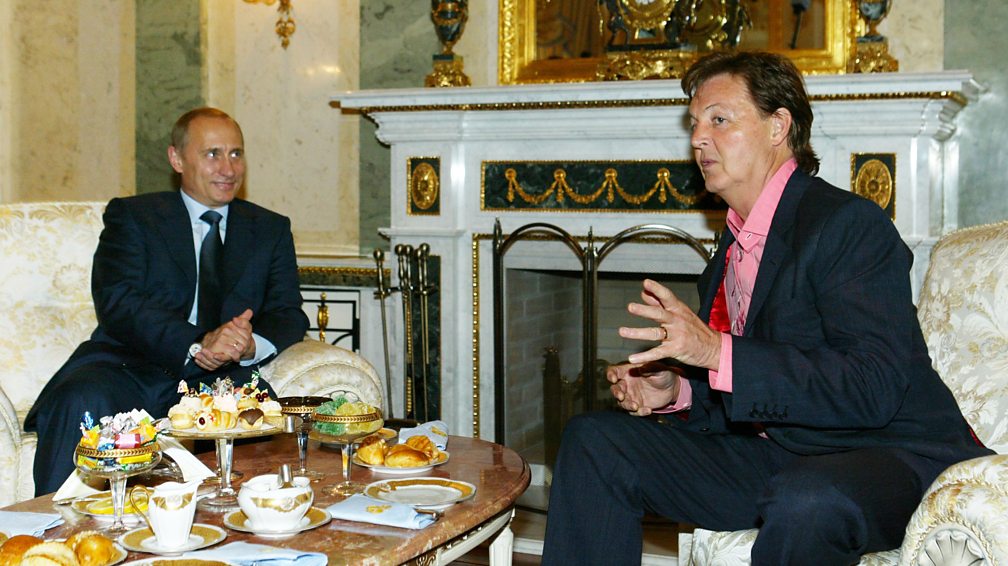 "I'm back in the USSR, you don't know how lucky you are, boy," The Beatles sang in 1968, and in 2003 Paul McCartney found himself not just in Russia, but having tea with President Putin. Again, there's a lot going on in the photograph - look at Putin's eyes, and the ornate food being served up. The meeting was in Fireplace Hall in the Kremlin and, according to the Kremlin's official site, this is what they spoke about:

"President Putin said Russians love McCartney's work, and music by The Beatles was a drop of freedom in the Soviet Union.

"Answering Sir McCartney's question whether The Beatles' music was banned in Soviet times, Mr Putin said there was no ban on it, but many things were over-ideologised, and The Beatles' trend did not fit into Soviet ideology. That was the reason why in the 1980s the official authorities did not allow Paul McCartney to hold a concert on Red Square."

And that's what you call diplomatic talk. McCartney told reporters after the meeting that he'd given Putin a private rendition of Let It Be. He played Red Square that evening and, 10 years later, wrote to Putin calling for the release of a group of detainees known as the Arctic 30.

When he was on Desert Island Discs in 2013, then-Labour leader Ed Miliband revealed a love of Robbie Williams, a‐ha and, interestingly, Édith Piaf's Je Ne Regrette Rien. It's probably fair to assume he's not much of an extreme metal fan, nor - as the above clip proves - is he particularly adept at throaty roar singing.

Sitting in for Jeremy Vine on Radio 2 ahead of Glastonbury having its first ever punk and metal stage at last year's festival, he received instruction for how to best sing like a metal star from none other than Barney Greenway from Napalm Death, who were playing the stage. Ed mostly looked terrified. 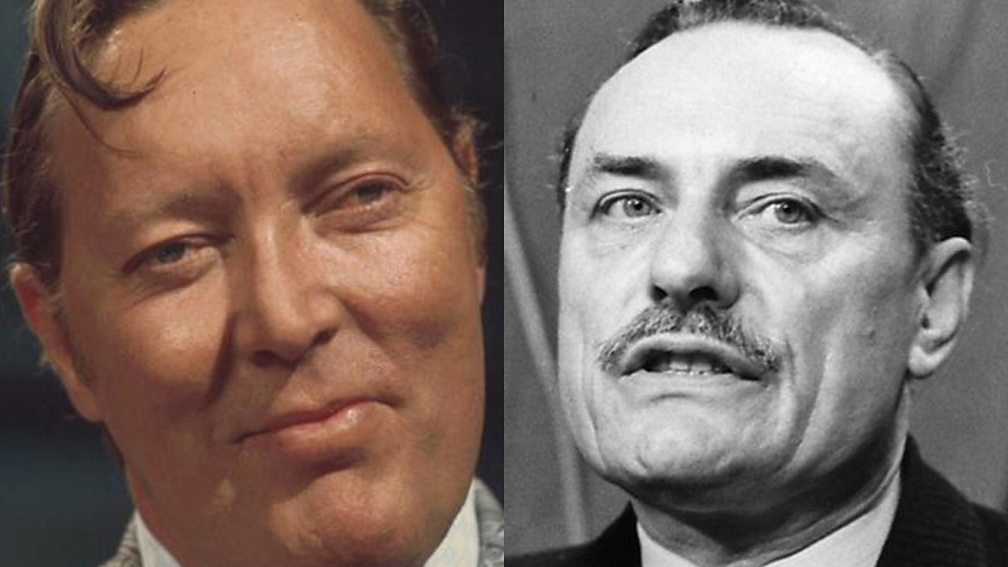 If you listened to the recent Radio 4 documentary Pop Star Philosophy you will have heard mention of perhaps the most unexpected meeting on this list - the time when former Conservative MP and Minister for Health Enoch Powell introduced himself to early rock 'n' roll star Bill Haley in 1974. Powell had attracted widespread attention in 1968 for his 'Rivers of Blood' speech, which was called "one of the most incendiary speeches in modern British politics" in the description for Radio 4's April broadcast, 50 Years On: Rivers of Blood; Haley was leader of The Comets, who were famed for recording the first rock 'n' roll song to go mainstream, 1954's Rock Around the Clock.

The political commentator Alan Watkins witnessed the meeting, which took place in the green room of a TV studio. "I was chatting affably to Haley," Watkins recalled in a 2000 Independent article, "when Powell loped purposefully across the room."

"The action having been performed to mutual satisfaction, they talked with equal affability for a few minutes. Later I asked Powell:

"'Why did you want to shake Bill Haley's hand, Enoch?'

"'Why did I want to shake Bill Haley's hand?' Powell replied, for one of his conversational tricks was to repeat the question before answering it, if indeed he ever came round to doing so. 'Surely the answer must be obvious. He is the most influential character of our age.'" 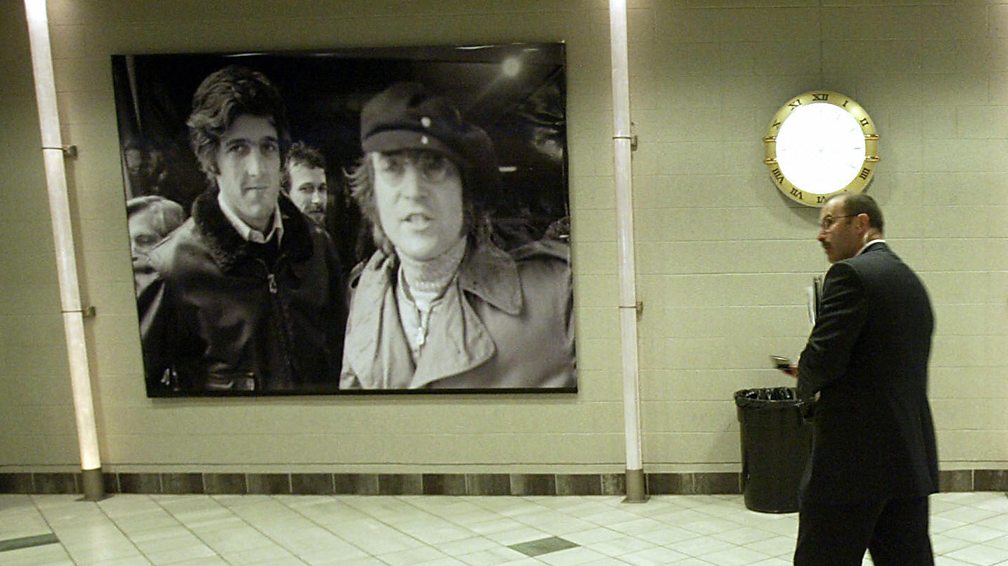 John Kerry was US Secretary of State from 2013 to 2017 under President Obama, and he also ran for president in 2004 as the Democratic nominee, losing to Republican incumbent George W. Bush.

Controversy surrounds the details of his military service record, but he fought in Vietnam in the late-60s, then joined the Vietnam Veterans Against the War organisation, becoming nationally recognised as a spokesman opposing the war.

It was at an anti-war rally in 1972 that he managed to be photographed with John Lennon - or, some might argue, photobomb the former Beatle. It proved to be PR gold for Kerry, who early in his political career "earned the nickname Live Shot for his unerring ability to get in front of cameras", as the Times said in 2004. The above picture was taken at the 2004 Democratic National Convention during Kerry's unsuccessful run for president. Twenty-four years after Lennon's death in 1980, he was still getting mileage out of the snap of them together at a protest in the early-70s. And it was also in 2004 that Kerry played guitar with Moby, creating more imagery of political value. 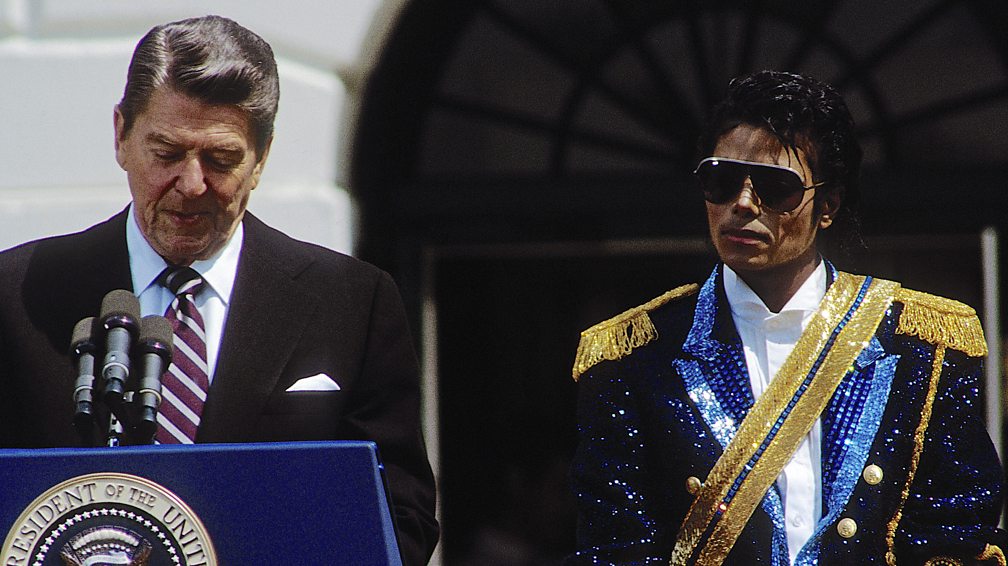 Famously, Elvis met President Nixon, so did James Brown, and Beyoncé sang At Last at President Obama's 2009 inauguration, much to the annoyance of Etta James, as the Guardian reported. George Harrison also had an audience with a president - Gerald Ford - after Ford's son Jack invited him and Ravi Shankar for lunch at the White House in 1974.

Ten years later, Michael Jackson made an appearance with President Reagan. Possibly wanting to upstage Elvis, who met Nixon in something approaching a jump suit, Jacko came wearing a glittering military coat and sash, and one white glove. To make things even stranger, he was being awarded the Presidential Public Safety Communication Award for allowing Beat It to be used in a public service announcement denouncing drink driving.

Reagan peppered his speech with dad gags. "Well, isn't this a thriller?" he began. "I hope you'll forgive me, but we have quite a few young folks in the White House who all wanted me to give you the same message. They said to tell Michael, 'Please give some TLC to the PYTs.' Now I know that sounds a little 'off the wall', but you know what I mean. And, Michael, I have another message from our fans in the Washington DC, area. They said, 'We want you back.' So when you begin your greatly awaited cross-country tour, will you please be sure to drop off here in the nation's capital?"

What Reagan wrote in his diary about the day is fascinating: "A ceremony on the S[outh] Lawn to honor young Michael Jackson who is the sensation of the pop music world - believed to have earned $120 mil. last year. He is giving proceeds from one of his biggest selling records to the campaign against drunk driving. He is totally opposed to drugs & alcohol & is using his popularity to influence young people against them. I was surprised at how shy he is."

Alice Cooper and Theresa May, 2010 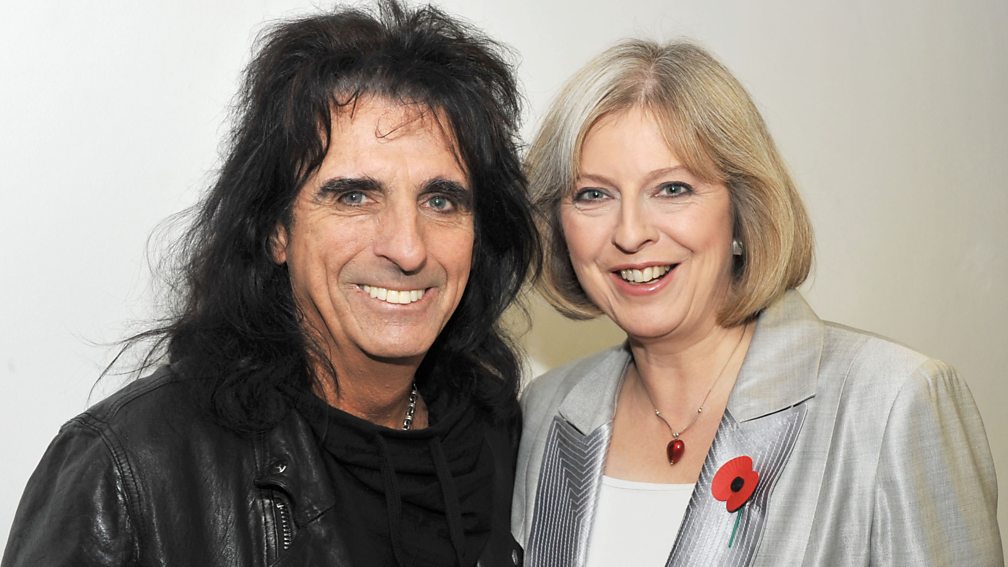 Finally, a classic image from the BBC archive, and a worthy contender for the caption competition on Have I Got New for You. Shock rocker Alice Cooper and then-Home Secretary Theresa May were guests on The Andrew Marr Show in 2010, where this photo was taken.

What did they talk about? We do not know, but Cooper is quite the political animal. As CNN reported in 2016, he's been running for president as a joke since 1972. "I think the idea that I honestly have no platform is maybe the most honest thing I've heard in politics in a long time," he said. "I have absolutely no idea what to do and if everybody said that, that would give me a guy I can vote for."