Strange things artists have worn on stage and the reasons why 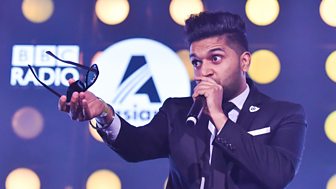 Anyone at Asian Network Live in Birmingham on 10 March, or watching online, might have spotted a curiosity pinned to the suit of star Indian singer and songwriter Guru Randhawa, who was making his UK debut. There, if you looked closely, was a Blue Peter badge.

Why was he wearing it? It transpired that the Blue Peter team were filming behind the scenes at the event and both Guru and Asian Network presenter Bobby Friction had been awarded badges in recognition of their achievements. Proudly, Guru decided to pin his to his jacket ahead of his performance.

Badges, costumes, hats, helmets... these things have always been part of pop culture. And sometimes musicians wear them for reasons you wouldn't necessarily expect... 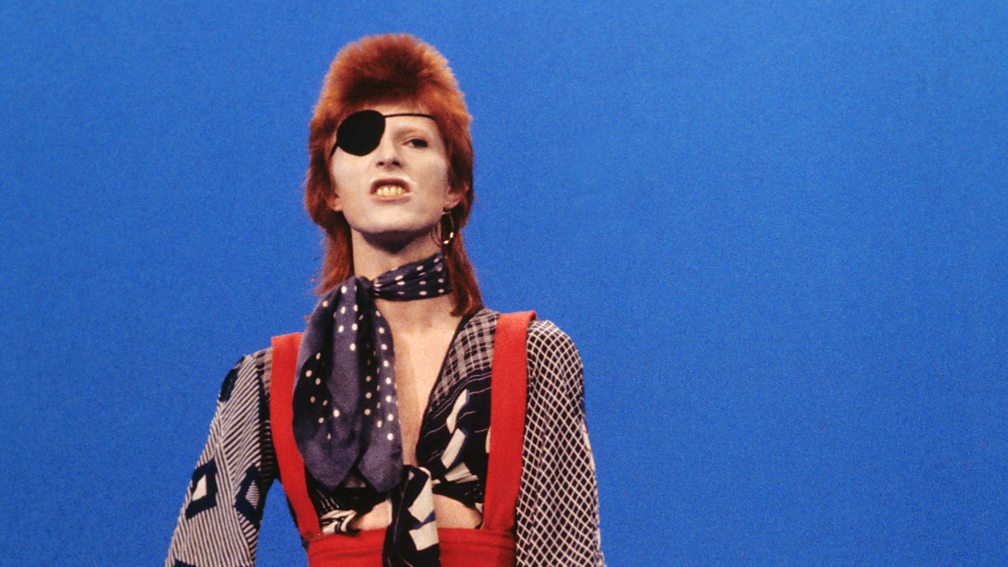 With David Bowie's Ziggy Stardust persona came an eye-patch, but was there something more to it than being just a natty fashion accessory? Perhaps so. In a diary he wrote for Mirabelle magazine, he said: "I promised you last week that I would tell you about my recent trip to Amsterdam where I went to collect The Edison Award... We stayed at the hotel where the award was being presented, and we all found it very attractive… But, unfortunately, I had a little trouble with my eye which had started watering quite a bit shortly after I arrived.

"By the time of the actual presentation, I had to wear a patch over my eye - which, of course, didn’t distract from my natural good looks - and I wore green dungarees and a pair of high brown boots. Angie [his wife] looked very stunning, really sophisticated in a chic beige dress with a roll neck and a super swirly skirt."

So, the eye patch came about because of a case of conjunctivitis? It's possible, but it's worth noting that those diaries weren't written by Bowie himself. According to fan site Bowiewonderworld, they were penned by Cherry Vanilla, an actress and performer whom Bowie had hired to be his PR. 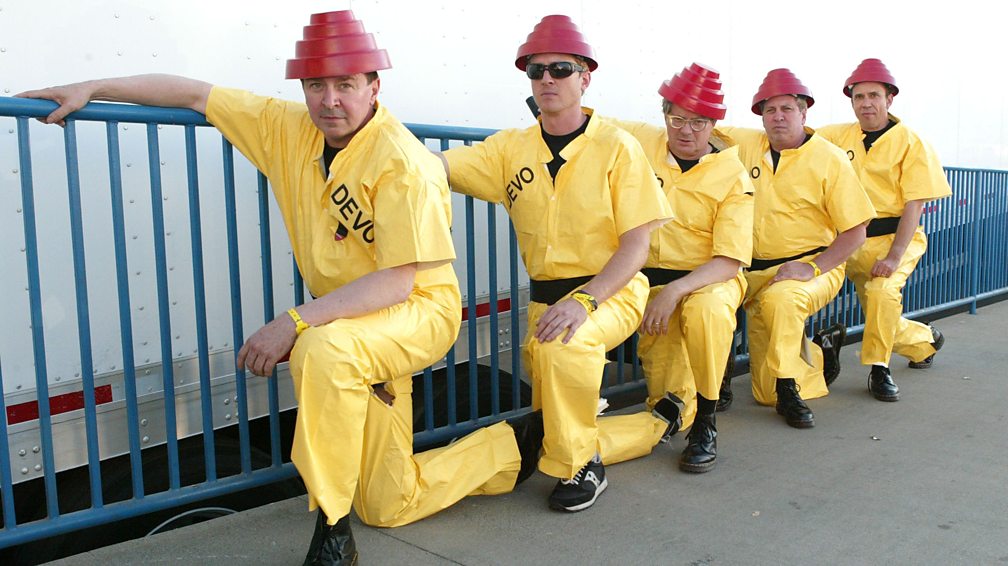 American art-rock band Devo first started wearing their red energy dome hats in 1980, and they've become a kind of trademark of the group. Amazingly, there's a whole Wikipedia page about them, detailing the many explanations the band have come up with for their design and purpose.

"It [the hat] was designed according to ancient ziggurat mound proportions used in votive worship," Gerald Casale of the band once wrote their site. "Like the mounds it collects energy and recirculates it. In this case the dome collects energy that escapes from the crown of the human head and pushes it back into the medulla oblongata for increased mental energy."

Let's just say that Devo like to spin a yarn, and perhaps lead singer Mark Mothersbaugh's explanation rings truest: "We designed them, Jerry [Casale] and I. We were influenced both by German Bauhaus movement and geometric fashion, and Aztec temples. We just liked the look. It looked good, and it didn't look like any other bands out there. We weren't interested in wearing groovy hats or groovy clothing. We kind of looked like Lego toys or something by the time we got those on our heads, and that was a positive thing." 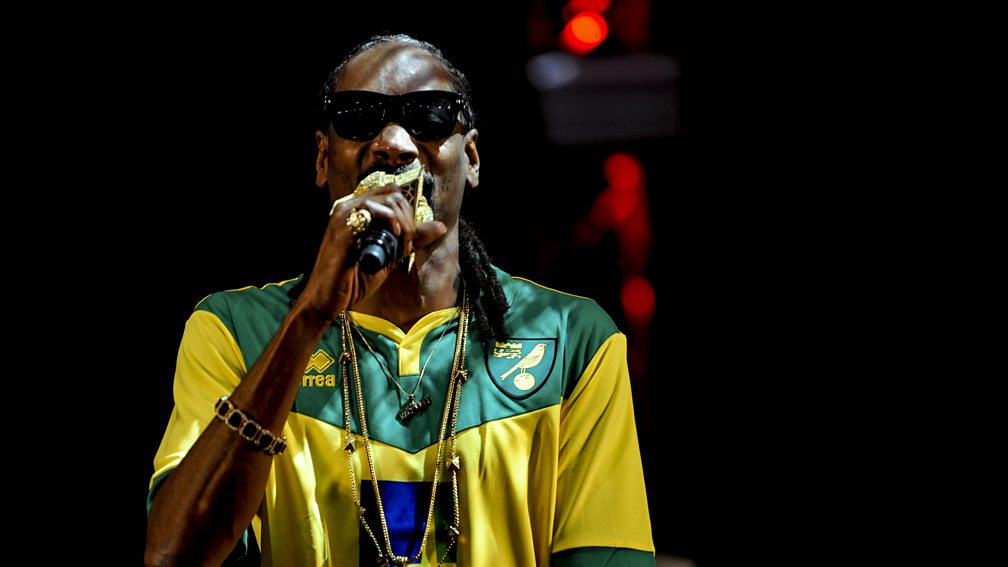 Superstar rapper Snoop Dogg is a huge sports fan, and he even has his own youth American football league. Clearly he knows a bit about our kind of football, too, and Norwich fans would have been thrilled to see him wearing their shirt at Radio 1's Big Weekend 2015. He was expressing solidarity with the city he was performing in, but is he also a fan of the Canaries? Perhaps not. Proving he's a man of all the people, he's also been spotted wearing the strips of many other clubs, including Man Utd, Liverpool and Barcelona. 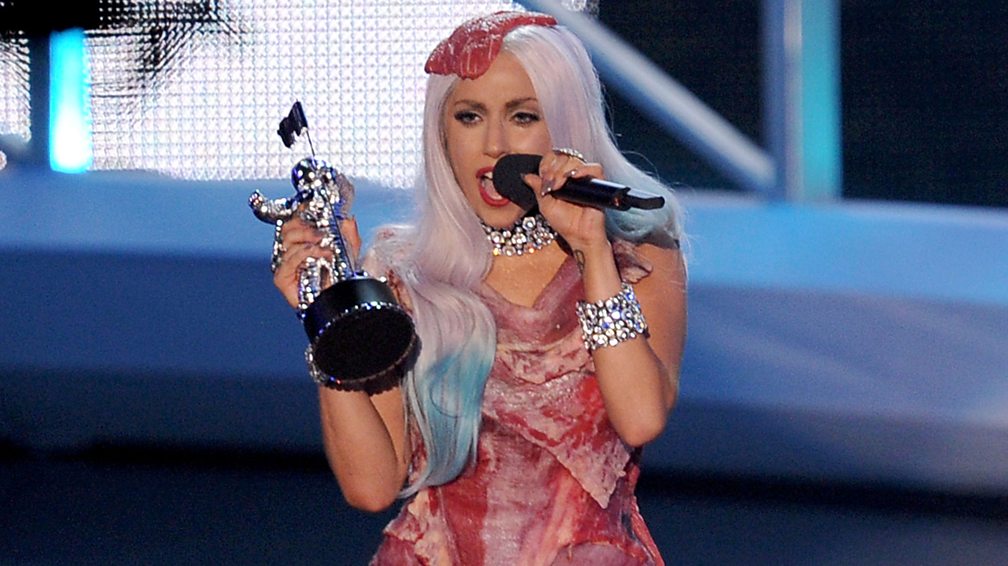 It made me ask myself, what's the difference between her outfit and an outfit made of leather?
Ellen DeGeneres

Lady Gaga has sported many an impressive outfit, but perhaps nothing has grabbed as much attention as her infamous meat dress, which she wore at the MTV Video Music Awards 2010 (she subsequently had faux-meat dresses made for her Born This Way Ball tour). Designed by Franc Fernandez and styled by Nicola Formichetti, it became instantly iconic and highly controversial. "I love Lady Gaga, but as someone who also loves animals, it was really difficult for me to sit next to Lady Gaga while she was wearing that outfit," Ellen DeGeneres, who is vegan, said. "But it did make me ask myself, what's the difference between her outfit and an outfit made of leather?"

BBC News came up with five interpretations for it, ranging from an anti-fashion statement to a commentary on ageing and decay, and a consideration of our hypocritical attitude to meat. Vogue saw it as a "powerful political statement, rather than just another attention-grabbing outfit", and a reference to a speech Gaga had made, The Prime Rib of America, during which she urged the US military not to discriminate against gay men and lesbians from serving in the army. They quoted the singer from a Financial Times interview, in which she said the law prevents the military from enjoying "the greatest cut of meat my country has to offer... You saw the prime rib of America speech so you knew it was about equality, but nobody else knew that. Everyone just saw pork. It wasn't pork! It was prime rib and plain steak."

The dress has been preserved by taxidermists, effectively making it one huge piece of beef jerky.

It made me ask myself, what's the difference between her outfit and an outfit made of leather?
Ellen DeGeneres

Anonymity and dance music often go hand in hand. Burial, SBTRKT, Zhu and countless others have all messed with our perceptions of who they actually are, forcing us to concentrate on the music. And so have French duo Daft Punk, who have also created a strong visual identity to accompany their records and performances. Their robot helmets have become iconic and serve many purposes, as the duo told Rolling Stone in 2013. "We're interested in the line between fiction and reality, creating these fictional personas that exist in real life," they said, adding they were part of a pop lineage that includes "Kraftwerk and Ziggy Stardust and Kiss. People thought the helmets were marketing or something, but for us it was sci-fi glam... We're not performers, we're not models - it would not be enjoyable for humanity to see our features, but the robots are exciting to people."

And, of course, the helmets have allowed them to live a normal life, despite their fame. "I don't have people constantly coming up to me and reminding me what I do," Thomas Bangalter said. "It's nice to be able to forget."

It wasn't unusual to see the punks flirt with Nazi symbols. Sid Vicious of the Sex Pistols was often photographed wearing a t-shirt emblazoned with a Swastika, and in the late-70s Siouxsie Sioux of Siouxsie and the Banshees sometimes wore a Swastika armband. They were being provocative, not expressing any affiliation with the ideology of the Nazis, and trying to get up the noses of their parents.

"It was always very much an anti-mums-and-dads thing," Siouxsie told Jon Savage in his book, England's Dreaming. "We hated older people. Not across the board, but generally the suburban thing, always harping on about Hitler, and, 'We showed him,' and that smug pride. It was a way of saying, 'Well, I think Hitler was very good, actually'; a way of watching someone like that go completely red-faced."

And, finally, we're used to seeing rock stars wearing sunglasses the whole time, as indeed Bono from U2 does. You might think he's just being cool, but he has a reason - he suffers from glaucoma, a condition where the optic nerve becomes damaged, usually because fluid has built up in the front part of the eye.