Shake it off! 6 epic pop beefs that eventually thawed

There barely seems to be a moment in pop when some almighty row isn't raging between rival artists, and sometimes between members of the same group. Latest out of the blocks? Rapper Cardi B and serial beefer Azealia Banks, who have been locking horns since, as Newsbeat reported, the latter called the former "illiterate" and "untalented" on a US radio show.

But let's not get bogged down in negativity! For, although it seems that some beefs will never end, there's usually a way out. Sworn enemies can become fast friends, often for the second time. And these inspiring six pairs prove it... 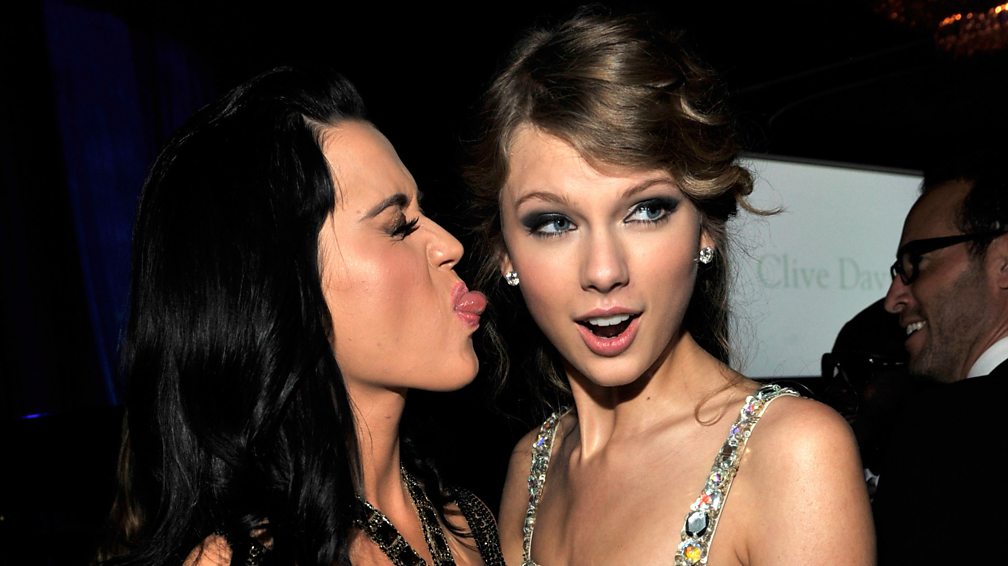 I just got to my dressing room and found this actual olive branch. This means so much to me
Taylor Swift

They were friends and then they weren't, and the fall-out happened because of a dispute over... backing dancers. Katy Perry explained her side of the story to Late Late Show host James Cordon in an episode of Carpool Karaoke, saying that three backing dancers who had worked with her asked if they could go on tour with Taylor Swift. Katy wasn't on a "record cycle", so she said yes, but added: "I will be on a record cycle in about a year, so be sure to put in a 30-day contingency in your contract, so you can join me when I say I'm going back on [tour]." A year later, the dancers joined Katy, royally annoying Taylor, who told Rolling Stone: "She basically tried to sabotage an entire arena tour. She tried to hire a bunch of people out from under me."

"I'm ready for that BS to be done," Katy also said to Cordon, and it was indeed Katy who took the beef off the grill by sending Taylor an actual olive branch earlier this month. As Newsbeat reported: "Swifty, who is about to start her Reputation tour, shared a video of the package she received from Katy - which appeared to include a note with the words 'miscommunications' and 'deeply sorry' written on it." Taylor said on Instagram, "I just got to my dressing room and found this actual olive branch. This means so much to me."

I just got to my dressing room and found this actual olive branch. This means so much to me
Taylor Swift

Much like Katy and Taylor, Blur and Oasis began as friends, and expressed respect for each other in public. As the Guardian reported, "At the 1995 NME Awards, where Blur won five awards to Oasis's three, Noel and Damon gamely mugged for the cameras together, and Liam, in a rare moment of humility, conceded that: 'I don't think we should have got more [awards] than Blur. Blur are a top band.'"

Relations soon soured. "If you really want to know, the main reason was that, when Oasis got to Number One with Some Might Say, I went to their celebration party, y'know, just to say, 'Well done,'" Damon told NME about the April 1995-released single. "And Liam came over and, y’know, like he is, he goes, 'Number f****** one!' right in my face. So I thought, 'Okay, we'll see…'"

The so-called Battle of Britpop was born, and went into overdrive in August when Damon decided to release Blur's Country House on the same day as Oasis's Roll With It, creating a chart battle that made News at Ten. Blur won, but even a decade later relations were still fraught with Damon telling NME in 2006: "I can't make it up with Noel. Britpop would be over and heaven forbid that we'd ever admit we'd all grown up!"

Damon and Noel would eventually become friends, performing together at a Teenage Cancer Trust benefit concert in 2013. Liam, on the other hand, still seems to have an issue with Damon, as well as with his brother, tweeting last year: "That gob****e out of Blur might have turned Noel Gallagher into a massive girl but believe you me next time I see him there's gonna be war." 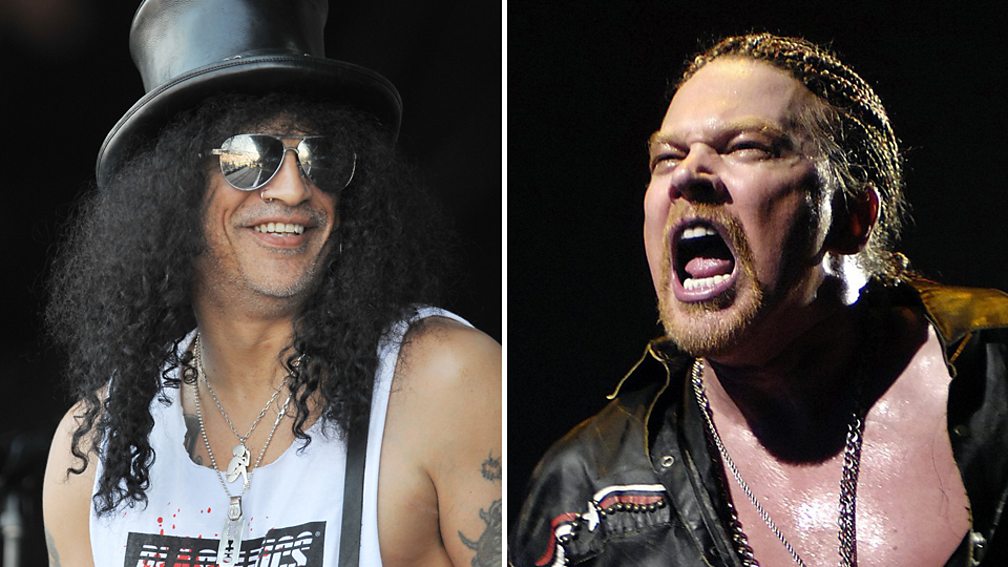 It wasn't even me necessarily leaving the band; it was me not continuing on with the new band that Axl had put together and was now at the helm of
Slash

Liam v. Noel is proof enough that rivalries happen within bands, and none more so than with Guns N' Roses members Slash and Axl Rose. The guitarist and singer initially fell out in 1991 when Slash contributed guitar to two Michael Jackson tracks, Give In To Me and Black or White. According to the band's ex-manager Doug Goldstein (via NME), Axl considered it a betrayal. At the time there were rumours, soon to become charges, about Jackson's relationship with children, and Axl claimed to have been molested himself. Supposedly in bitterness, he later removed Slash's solo on a cover of the Rolling Stones' Sympathy for the Devil that Guns N' Roses recorded for the Interview With the Vampire soundtrack.

From Slash's point of view, he says he left the band in 1996 after Axl had trademarked the name. He told CNN's Piers Morgan in 2012 that, "It wasn't even me necessarily leaving the band; it was me not continuing on with the new band that Axl had put together and was now at the helm of."

They didn't speak for 20 years, during which time a war of words raged in the press. "Slash either should not have been in Guns to begin with or should have left after [1988 album GNR Lies]," Axl told Spin in 1996. "In a nutshell, personally I consider him a cancer and better removed, avoided - and the less anyone heard of him or his supporters, the better."

And, then, to everyone's surprise, the pair suddenly buried the hatchet in 2016 and performed together again in a re-formed Guns N' Roses. The group's first single in almost a decade, Shadow of Your Love, was released on 4 May.

It wasn't even me necessarily leaving the band; it was me not continuing on with the new band that Axl had put together and was now at the helm of
Slash 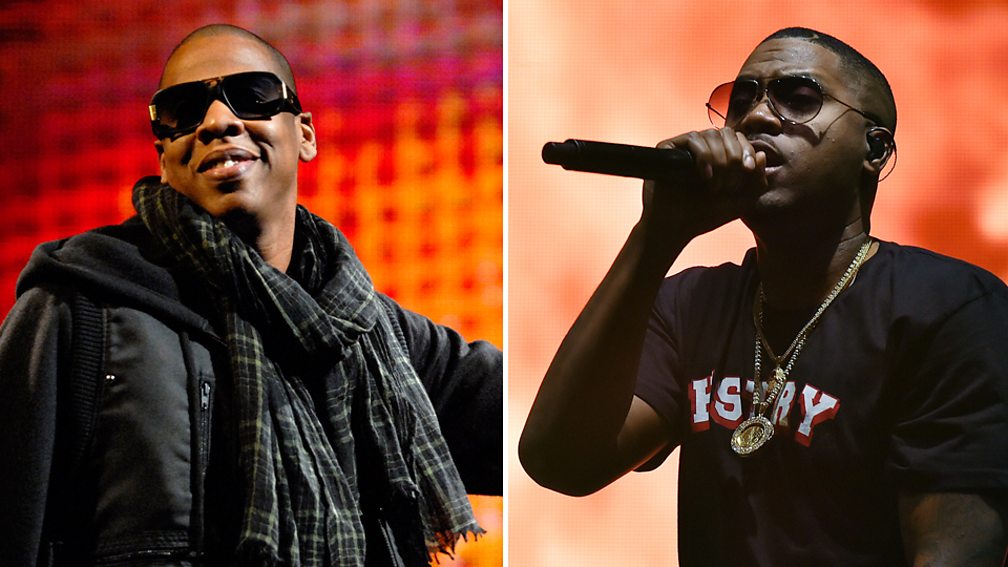 If it seems like there's a never ending series of rows in the rap game, it's because beefing is very much part of the culture. It's an MC's duty to stand his or her ground and trash rivals, and it's led to some fabulous diss tracks in the 40-odd years of hip hop history, mostly good-natured.

Sometimes, though, barbs - in songs, and in the media - hurt, leading to stand-offs between artists that can last for years. And perhaps the most famous rap beef of all time involves two of hip hop's biggest stars - Jay-Z and Nas. Exactly how it started depends on who you talk to, and actually, it doesn't really matter. At stake was being king of rap in New York, after New York itself had reclaimed rap's crown from Los Angeles, who stole it in 1988 when N.W.A came straight outta Compton. From 1996 onwards, verbal shots were fired in songs by both artists, culminating in Jay trashing Nas live at radio station Hot 97 FM's 2001 Summer Jam with the track Takeover, and Nas responding by releasing a brutal response, Ether, in which he accused Jay of trading his soul for riches, among other things.

In 2003 the feud seemed to cool, not least because Jay temporarily retired after releasing his Black Album in November that year. When he returned to the stage in 2005 he invited Nas to perform with him. The following year, Nas signed to Def Jam, Jay's label, and Jay was a feature on the Nas track Black Republican. They remain friends, and collaborators, with Nas featuring on our favourite Jay track of all time, BBC, from 2013 album Magna Carta Holy Grail. 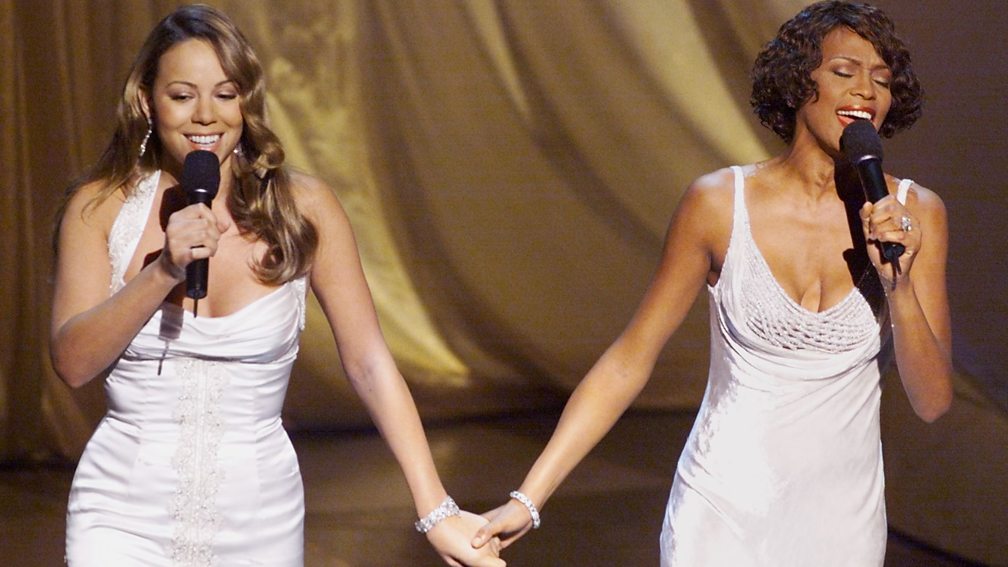 There was always this supposed rivalry in the beginning and then we did the duet and became friends... I loved her
Mariah Carey

Whitney Houston ruled the US charts in the late-80s, scoring an incredible seven consecutive No.1s between 1985 and 1988, and she began the 1990s with two more - I'm Your Baby Tonight and All the Man That I Need. Her reign at the very top of pop looked unassailable until a younger singer with a voice to rival Whitney's came on the scene, Mariah Carey, and promptly had six straight US No.1s in 1990 and 1991.

Much as they had done with Prince and Michael Jackson in the 80s, the press delighted in pitching Whitney and Mariah against each other, and they got their soundbite from Whitney during a 1990 TV interview. "What do I think of her?," said Whitney. "I don't think of her." She added, "Musically, I think she's a good singer," but it didn't matter - to the media and music-loving public at large, they were now bitter rivals, and they certainly slugged it out in the charts over the next five years.

Asked again - in 1995 by MTV - what she thought of Mariah, Whitney replied, "Maybe it's not what I think; it's what she thinks. It's more important." By 1998, any animosity had dissolved. They released a duet together - When You Believe from The Prince of Egypt soundtrack, which surprisingly only made it to No.15 in America - and the above picture is of the pair performing the song together at the 1999 Oscars.

When Whitney died in 2012, Mariah told Good Morning America: "I'm almost incapable to be talking about this still. I don't think people could ever really understand our relationship. There was always this supposed rivalry in the beginning and then we did the duet and became friends... I loved her."

There was always this supposed rivalry in the beginning and then we did the duet and became friends... I loved her
Mariah Carey 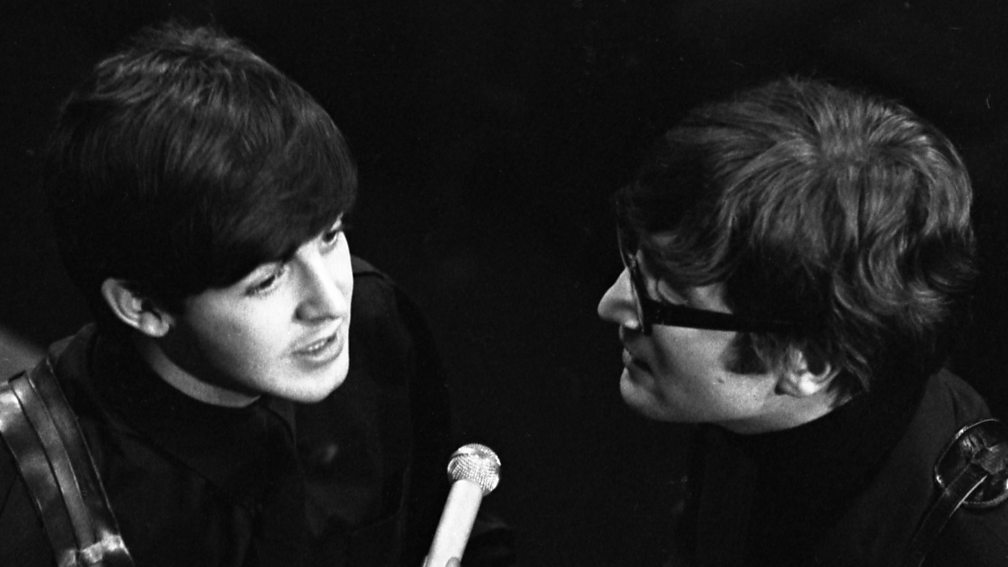 The last phone conversation I ever had with him was really great, and we didn't have any kind of blow-up
Paul McCartney

The diss track may feel like a reasonably new phenomenon but it's been around as long as songwriting itself, and it's hard to think of a more devastating example than John Lennon's How Do You Sleep? from 1971, directed squarely at Paul McCartney and including the added insult of featuring George Harrison on guitar. In the song, Lennon seethed, "Those freaks was right when they said you was dead," and, "The sound you make is muzak to my ears." It was a response, of sorts, to the far-more-mild jabs McCartney had included on the opening track, Too Many People, from his second solo album, Ram, also from 1971, such as, "You took your lucky break and broke it in two."

The relationship between the two had been tricky for many years before their post-Beatles showdown. "I pretty damn well know we got fed up of being sidemen for Paul," John told Rolling Stone about his final years in the band, adding that he was upset by how Paul and George had responded to his affair and 1969 marriage to Yoko Ono: "Ringo was all right, but the other two really gave it to us. I'll never forgive them."

John made up with George and patched up some of his differences with Paul. They became close again in 1974, even playing music together, drifted apart after that, but the final time they spoke before John was killed in 1980 was a thankfully friendly encounter. "Fortunately for me, the last phone conversation I ever had with him was really great, and we didn't have any kind of blow-up," Paul told Playboy in 1984.

The last phone conversation I ever had with him was really great, and we didn't have any kind of blow-up
Paul McCartney