How Introducing kickstarted the careers of your favourite musicians 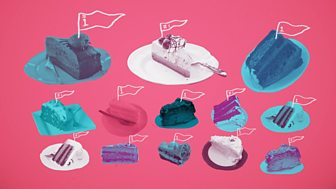 BBC Music Introducing celebrated 10 years of steadfast support for up and coming artists in 2017 with a big birthday bash - BBC Music Introducing Live - at London's O2 Academy Brixton. It was partly a hat-tip to all the singers and musicians who have sent their songs in for consideration, and partly a celebration of some of Introducing's biggest success stories, including George Ezra, Slaves and Blossoms.

Of course, these acts - singular and wonderful as they are - would always have made waves on their own, but some of the earlier upward steps will have been made a little easier thanks to exposure on BBC Music Introducing radio shows, both locally and nationally.

The first song James Bay sent to BBC Music Introducing (Beds, Herts & Bucks) was Move Together, the lead song off his debut EP, and one that was to eventually become a key part of his debut album Chaos and the Calm. That was in June 2013, just as people were starting to become aware of this intense young man with his long hair and his love of the wide-brimmed hat.

In August 2014, his song Let It Go was picked up as Introducing's choice for the Radio 1 playlist, and by December, James had won the BRIT Critic’s Choice Award for 2015. This lit the blue touchpaper on a phenomenal year of achievement that included appearances at Glastonbury and Reading + Leeds. At both festivals, James played a surprise set for fans on the BBC Music Introducing stage.

Florence was one of the earliest (and most successful) beneficiaries of the BBC Music Introducing leg-up to the stars, having performed her first Maida Vale session for Steve Lamacq in 2008. That year she also took part in the Introducing showcase at SXSW festival, performing without the full romantic sweep or gothic grandeur that would come to characterise her recorded music. Those fledgeling first steps were crucial, with early fans and critics watching a visibly nervous singer transform and blossom before their eyes.

[WATCH] Florence and the Machine - Between Two Lungs (SXSW 2008)

A year later, Florence received The Brits Critics’ Choice award, and her debut album Lungs reached No.1, with international success - including a barnstorming headlining slot at Glastonbury 2015 - coming soon afterwards.

The first sighting of Catfish and the Bottlemen at the BBC was when Steve Lamacq played one of their demo songs in 2009, at about the time they were gaining attention for playing gigs in the car park after other gigs had finished. The following January, they uploaded their song Collide, which was seized upon by Bethan Elfyn & Adam Walton at BBC Wales.

They made their debut on the Introducing stage at Reading + Leeds in 2013, spent a year building up an intense fan following off the back of early singles Homesick and Rango, and released their debut album The Balcony in 2014. That same year, they won BBC Music Introducing Artist of Year at the BBC Music Awards. The world has been their oyster since then, with another Top 10 album, a Brit award (Best British Breakthrough Act) in 2016, followed by a surprise visit to the Introducing stage at Glastonbury 2016.

George Ezra's early uploads were not just playlisted by his local Introducing show, the presenters at BBC Bristol took a personal interest in making sure his voice was heard by as many people as possible. In this blog, Sam Bonham - Introducing presenter for BBC Bristol - explains that one listen to Angry Hill, and his deep voice, was all it took to realise they were on to something special: "As soon as we'd heard that track we knew that we had to include George in the BBC Introducing Picks for 2013 free download. We also knew that we had to take him to Maida Vale."

Still only 19, George recorded a series of sessions, gaining a reputation for one-take perfection with every song, among them his soon-to-be signature tune Budapest. That same year he played the Introducing stage at Glastonbury, the final stepping stone to pop stardom. He returned in 2017 for a surprise visit though. And when asked to appear at BBC Introducing Live, he had this to say: "The music industry was a very intimidating and confusing world for me when I was 18. I knew I wanted to perform and write for a living but had no idea how to make this a reality. BBC Introducing was and still is the most amazingly inclusive platform I could have asked for. Long live Introducing." 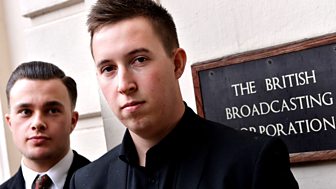 Slaves are the product of the chemistry between two men and their audience. Isaac and Laurie first uploaded the song White Knuckle Ride, to the Kent Introducing show back in 2012. Their feral racket instantly stood out, and in 2013 they were invited to film a special Introducing session at the BBC's Maida Vale studios, and took to the Introducing stage at Reading + Leeds, in support of their debut album Are You Satisfied?

A firm favourite with BBC Radio 1, their showstopping cover of Skepta's Shut Down (with a guest appearance by the man himself) was one of the key moments of Big Weekend 2015, and they repeated the trick as part of the surprise set they played from the Introducing stage at the 2017 Glastonbury festival.

Izzy Bizu is one of the artists who came to BBC Music Introducing fully formed. Her song Fool's Gold was first uploaded in June 2013, finding favour both with the seasoned talent-spotter Gary Crowley, BBC London's Introducing presenter, and 1Xtra. The following year she appeared on the Introducing stage at Glastonbury, having been made Introducing artist of the week on Radio 1. And in 2015 she filmed a particularly good session at Maida Vale and appeared on Later... with Jools Holland shortly afterwards.

She was longlisted both for Sound of 2016 and in 1Xtra's Hot For 2016 and went on to win the BBC Music Introducing Artist of Year. 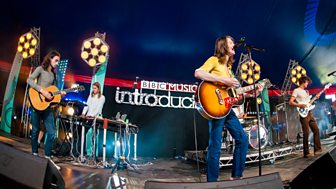 Another band with a skyrocketing profile, Blossoms began their BBC Music Introducing journey after uploading Blow to BBC Introducing in Manchester in 2013. Having built up a strong local following, they found themselves playlisted by Radio 1 as their Introducing act of the week, and in 2015, even took part on the BBC Music Introducing showcase at the prestigious SXSW festival in Texas.

When asked to play at BBC Music Introducing Live, the band said: "The BBC plays a significant part in everybody's lives in one way or another, but BBC Music Introducing (specifically) has certainly played a colossal part in ours, especially in our embryonic stage, and has continued to support us throughout. They provide a service like no other and are at the forefront when it comes to championing and nurturing new talent."

There's a lovely moment at the start of this clip, taken from The Shires' performance at BBC Scotland's The Quay Sessions, in which Ben Earle pauses to thank the BBC for crucial early support of his band: "They basically said from Day One, way before the record deal, 'we love you guys and we love country and we'll support you,' and they have done, every step of the way."

What he didn't say was that Introducing's first encounter with Ben was as the singer in self-styled "UK Black Eyed Peas" #1 Citizen, or that he had been taken to an Introducing Masterclass at Abbey Road studios by the BBC Music Introducing team at Beds, Herts and Bucks in 2011. Two years later when he found himself beguiled by country music and formed The Shires with Chrissie Rhodes it was BBC Three Counties that offered them their first interviews and sessions.

They were signed before their 10th gig, becoming the first ever English country act to be signed to a major Nashville label, having been featured on the BBC Radio 2 documentary on British country music, Nashville UK. Bob Harris was a crucial early supporter too, and BBC Radio 2 have playlisted them from their first single, through two Top 10 albums and the ultimate accolade, a Global Artist trophy at the 2017 Country Music Association awards in Nashville.

In 2010, Jake Bugg was a 16-year-old singer-songwriter, trying to figure out how best to get his music out to fans when he chanced upon the Introducing website. As he tells Jo Whiley in the clip above, "I'd been writing songs and I was always curious how to get music out there. I came across the BBC Introducing website and I was like, 'why has nobody never told me about this before?'"

The first track he uploaded was Fallin', sent to BBC Introducing in the East Midlands. He received a phone call from BBC Nottingham the next day saying they were going to play the song, and within a year he appeared on the BBC Music Introducing stage at Glastonbury. He made a return journey three years later, also playing the Introducing stage at Reading + Leeds in 2014. "I couldn't believe it was that quick," he added, "I'd been trying so hard but it was that instant".

Unlike some of the artists on this list, Jack Garrett's Introducing debut was with music that did not go on to form part of his repertoire as an established artist. He'd been writing songs since the age of 12, one of which had even been considered for the Junior Eurovision Song Contest in 2005, and his first Introducing upload was a song called Heartbreaker in 2009, his first radio play. By the time of his first session for BBC Music Introducing in 2014, he was an astonishingly proficient acoustic bluesman. Quickly gaining support and a record deal, he began recording an album called Nickel and Dime, but abandoned the project when he realised his heart wasn't in the blues after all.

In 2014, after a revamp into the one-man-band we now know, he made his debut on the Introducing stage at Reading + Leeds, and was invited to take part in the 2015 Introducing SXSW showcase in Texas, taking his place next to Little Simz, SOAK & Blossoms. That year he was named BBC Music Introducing Artist of the Year at the BBC Music Awards, and just before his actual debut album Phase was released, he was named the BBC Sound of 2016.