10 of the most beautiful gig venues in the UK

A beautiful venue can elevate a good gig to a transportive musical experience. A good thing for us music fans, then, that there are so many gorgeous gems around the country, from Victorian music halls to art deco auditoriums to converted factories. So if you fancy treating your eyes and ears to something beyond the usual circuit, check out our list below... 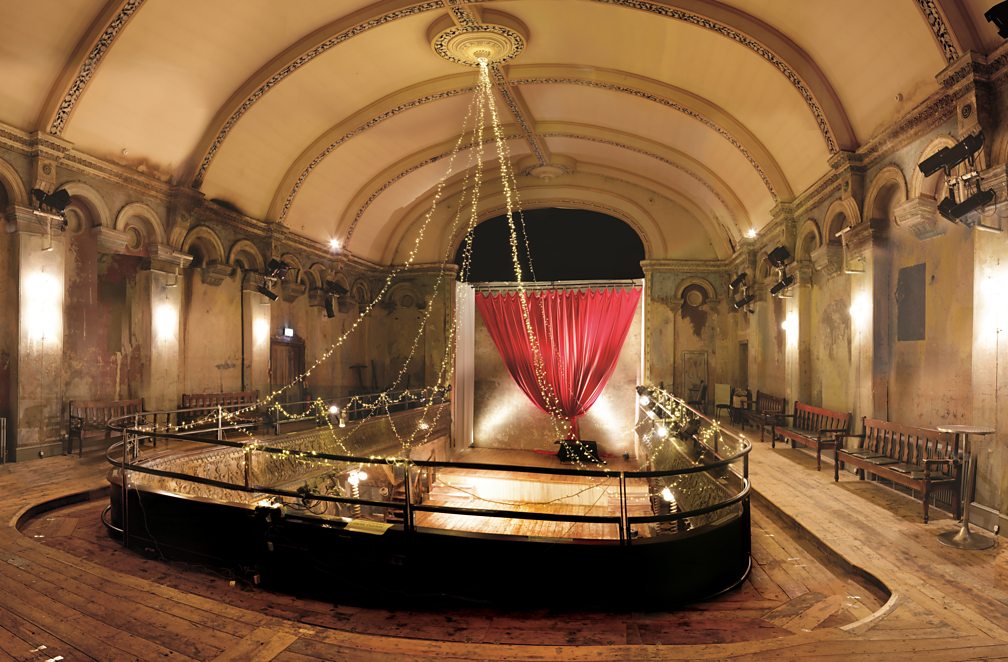 One of the world's oldest surviving music halls, Wilton's, former site of performances by the likes of Arthur Lloyd and George Leybourne is a must-visit for anyone who likes those 'beauty of the world's abandoned buildings' photo features, having all the spooky, haunted grandeur of Miss Havisham's wedding cake. It's far from abandoned, though: the 300-year old building - originally five houses - now hosts a rich variety of theatre, cabaret, classical and pop shows, and has held gigs by the likes of Wild Beasts, Lianne La Havas, Anna Calvi and Kelis. 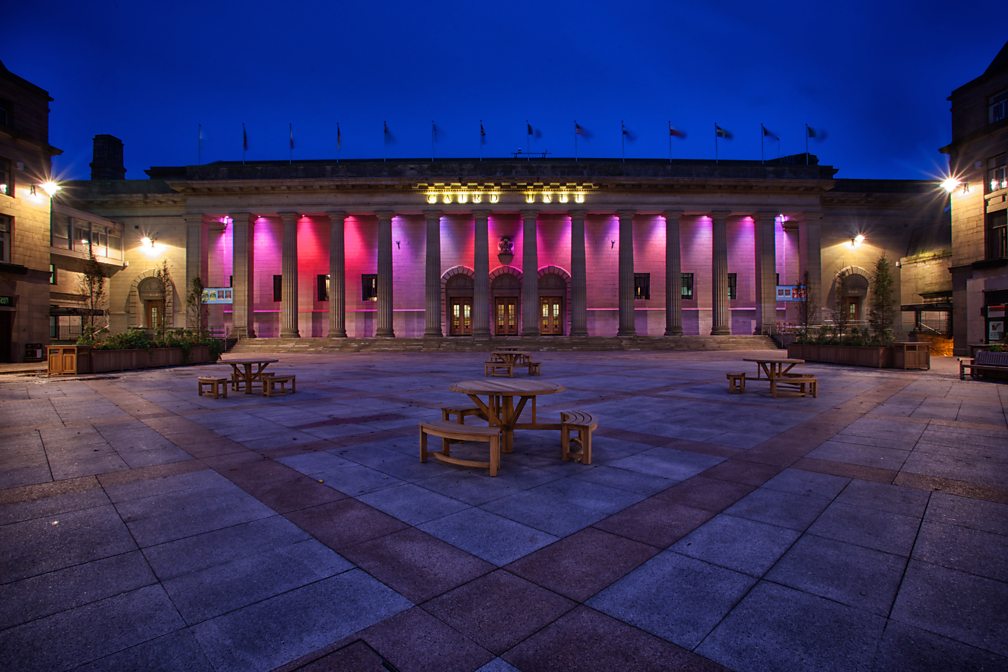 Jute, jam and journalism are the three Js for which Dundee is famous (as well as that cake), and it was the first of them that made the fortune of James Key Caird, who stumped up for this stupendously grand 2,300-seater neoclassical concert hall, opened in 1914. As well as being a regular venue for the Royal Scottish National Orchestra, those fluted columns have seen the passage of Björk, Paul Weller, The Rolling Stones, The Beatles, Frank Sinatra, Led Zeppelin and Bowie, and has gigs by Placebo, Happy Mondays and Erasure coming up. It also stood in for a Moscow theatre in the 1938 spy drama An Englishman Abroad. 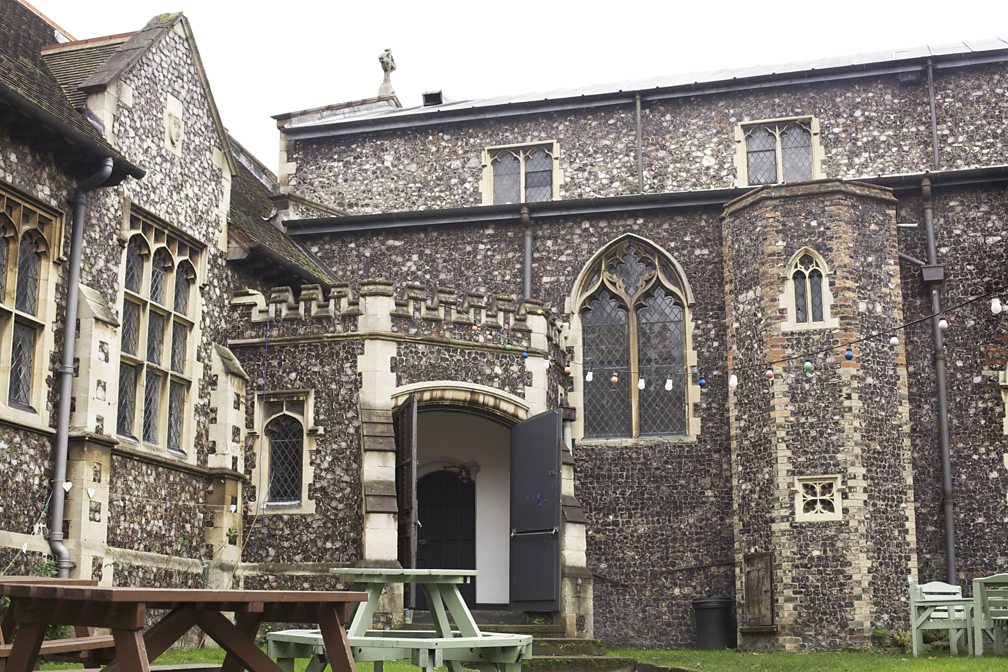 Opened back in 1980 when venues in converted churches still had an air of sacrilege about them, the 15th-century church of St Swithin has an illustrious and infamous rock history, including hosting gigs by Nirvana, Muse, Oasis, The Stone Roses, The Libertines and many more. 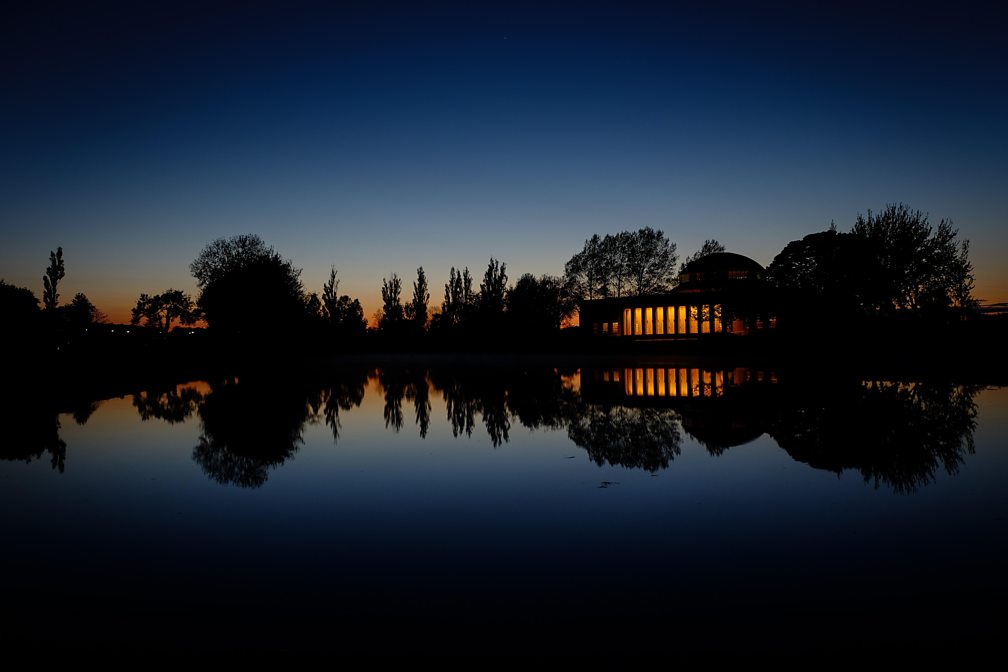 The trend for World Fairs in the late 19th and early 20th century left some great architectural gifts, among them Newcastle's Palace of Arts, from 1929's North East exhibition, attended by 4 million people over four months. Of the Palace of Engineering, the Palace of Industry, the Palace of Arts, the Festival Hall, Garden Club, a stadium of 20,000 capacity and the Women's and Artisan's sections, only the Palace of Arts remains. It now hosts a microbrewery and puts on gigs in the great hall from the likes of Michael Kiwanuka, Billy Bragg and Evan Dando.

Newcastle is also home to another striking venue of the industrial age in the Boiler Shop, below, a part of the historic Stephenson locomotive works, that now hosts the likes of Einstürzende Neubauten, Sparks and Liars. 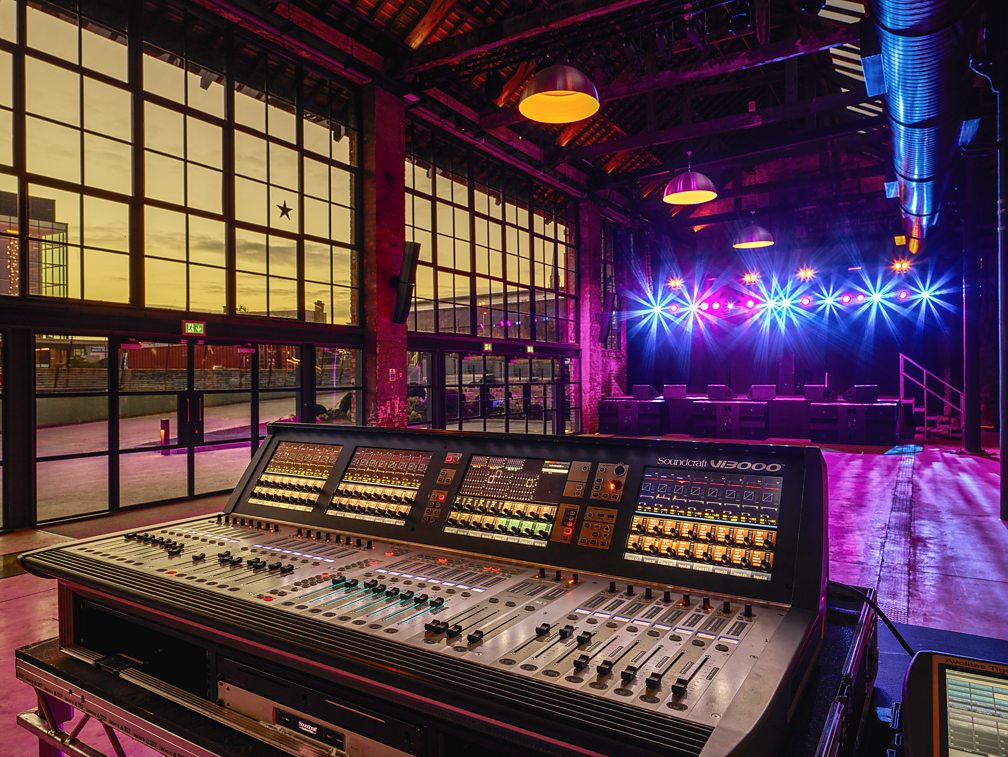 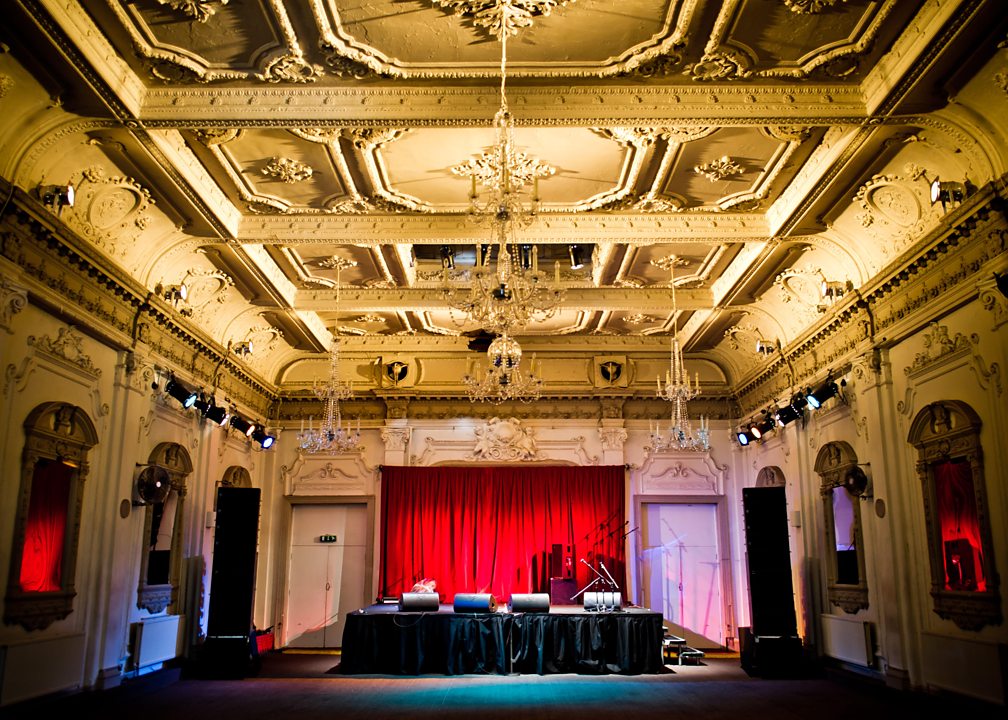 Ask anyone to think of a beautiful London music venue, and one of the first to spring to most minds will be this gorgeous, gilded rococo room in Shepherd's Bush. Originally opened in 1904, the dance hall also saw service as a wartime soup kitchen, a bingo hall and a snooker hall. Since reopening in 2001 as a music venue, it's hosted gigs by Sia, Adele, Suede, Courtney Love, R.E.M., and Florence + the Machine. 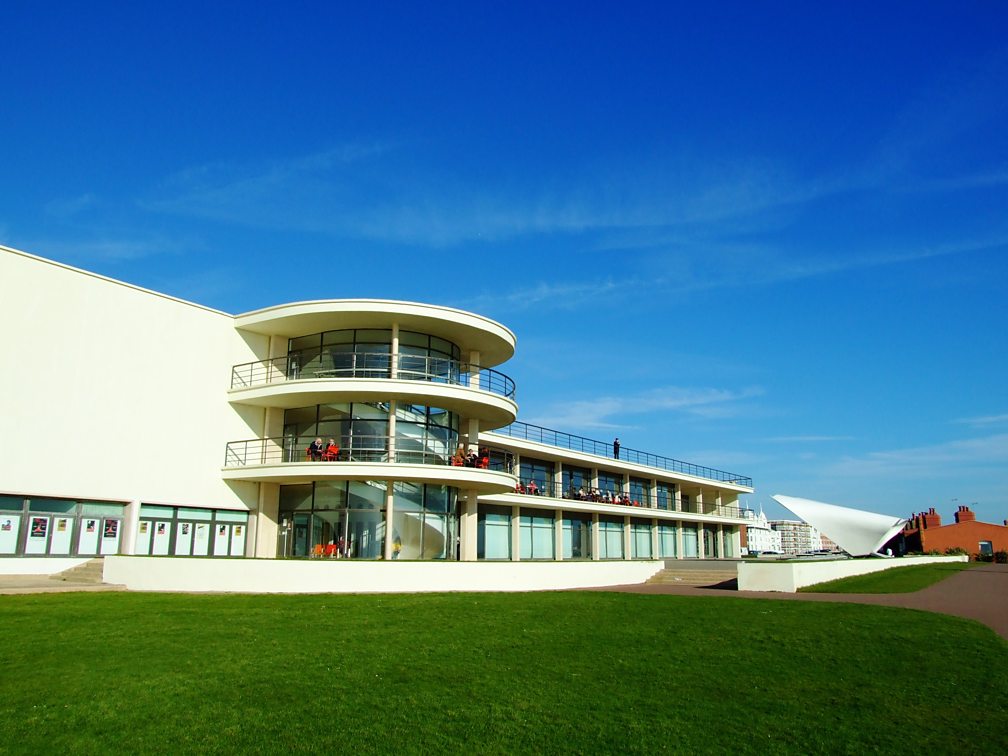 Sussex's 1930s modernist gem, a picture of seaside utopia, came to be as the result of a design competition run by the Royal Institute of British Architects. The town's mayor, the Earl De La Warr, put up the cash and the winning design came from German Erich Mendelsohn and Russian-born Brit Serge Chermayeff. One person who wasn't impressed, however, was comedian Spike Milligan, who saw service there when the Pavilion was used by the military during the Second World War. "A fine modern building with absolutely no architectural merit at all," he wrote in Adolf Hitler: My Part in his Downfall. "It was opened just in time to be bombed." The Pavilion fell on hard times during the 70s and 80s, until listed status and a Lottery-funded restoration saved the day. It reopened in 2005, and has since seen shows by the likes of John Grant, Rick Wakeman, The Jesus and Mary Chain and noted modernist architecture fans Saint Etienne. 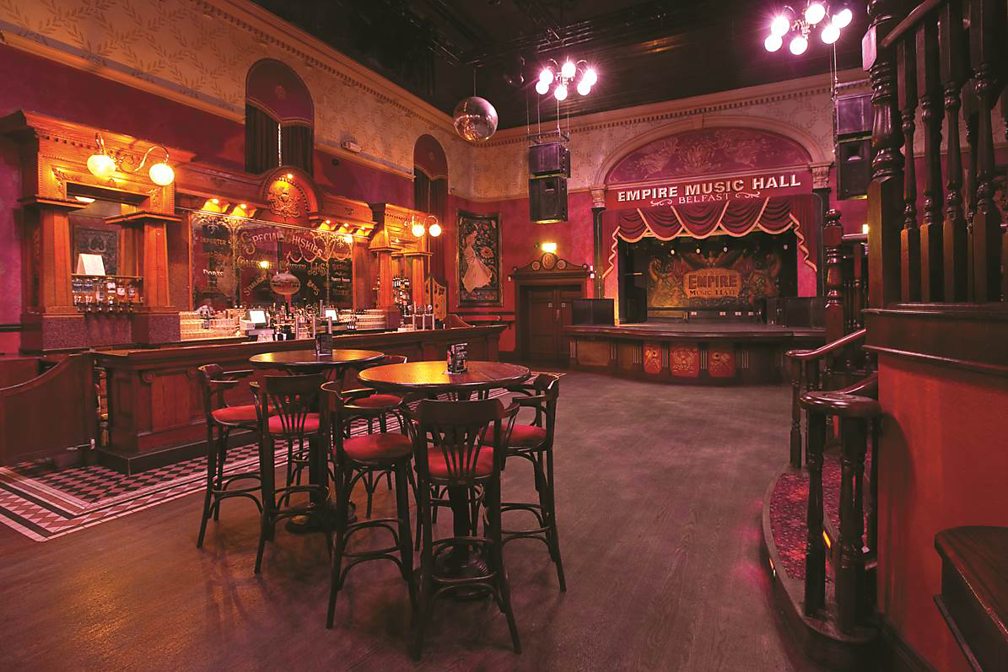 In a city already home to the gorgeous Ulster Hall and Waterfront Hall, it's rather indulgent to have somewhere as good-looking as the Empire Music Hall, a converted church with a Western feel, like stepping into a scene from Westworld. Instead of sentient cyborgs, though, you'll find a healthy roster of comedy, local rock and folk acts, tribute bands, and tour stops from the likes of Mark Lanegan, The Dears, Low and Arcane Roots. 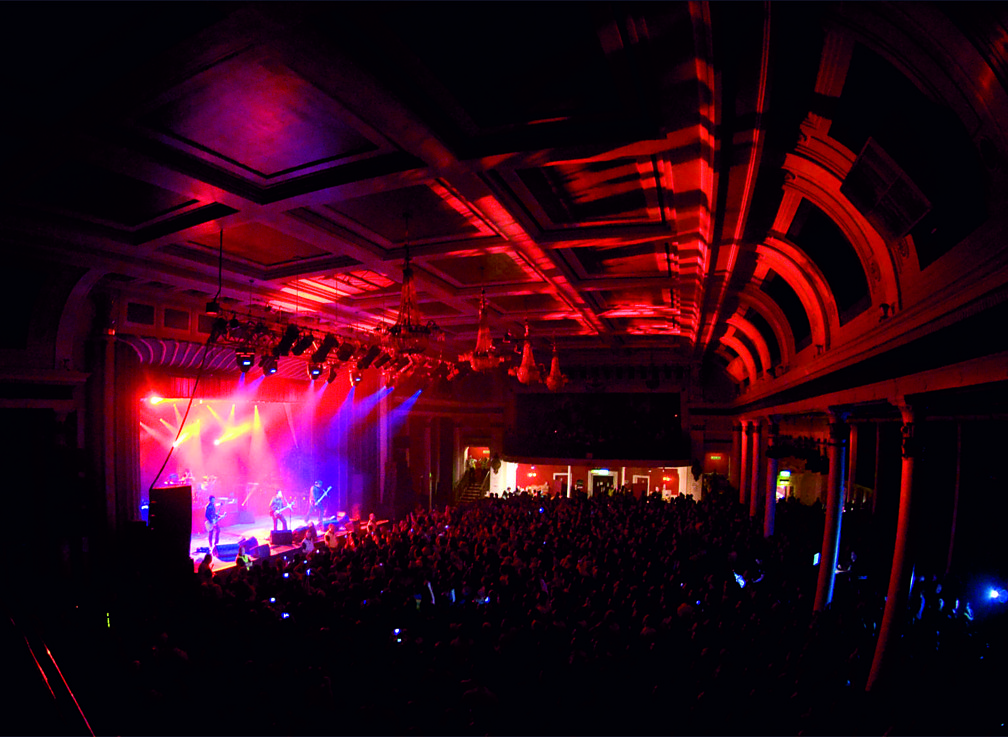 Once a byword for faded seaside glories, Margate has recently undergone a renaissance, thanks to the popularity of the Dreamland amusement park and the Kent town's thriving arts and music scene. Its Winter Gardens concert venue and dancehall, meanwhile, has been going strong on the coast since 1911. In its heyday, as well as its own Margate Municipal Orchestra, it saw visits from touring stars such as ballerina Anna Pavlova, soprano Dame Nellie Melba and, no doubt, others who didn't have desserts named after them. During the Second World War, when access to the surrounding area was restricted due to threat of invasion, it acted as a receiving station for some of the troops evacuated from Dunkirk, and took a direct hit from the Luftwaffe in 1941. It would go on, dauntless, to see shows by not only Laurel and Hardy, but The Beatles, The Smiths, Blur and Motörhead. 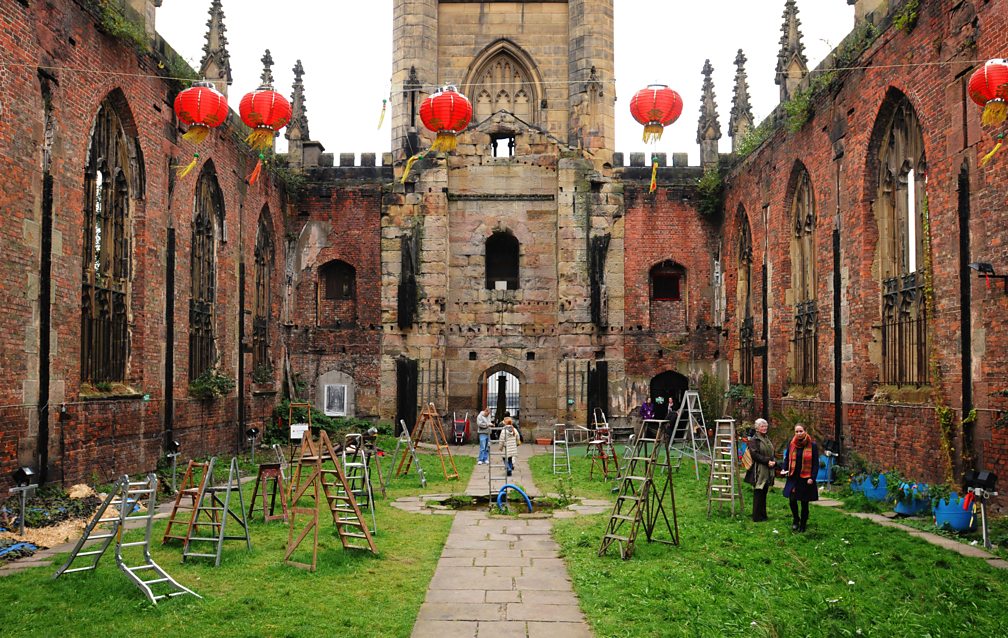 St Luke's Church, built between 1811 and 1832, was used as a concert hall as well as a parish church, until it was hit during one of the heaviest periods of bombing in the Liverpool Blitz on 5 May 1941. The church's roof, interior, bells and pipe organ were all lost, but the walls were left standing, and the ruin became a symbol of resilience, Churchill saying of the city soon after, "I see the damage done by the enemy attacks, but I also see the spirit of an unconquered people." St Luke's, known locally as the Bombed Out Church, became a memorial garden, and its upkeep was taken over in 2007 by members of Urban Strawberry Lunch, a music and community arts group. It holds an annual commemorative event for the Liverpool blitz and has also hosted gigs by bands such as The Kooks, Spaced, and British Sea Power. More recently, it also saw strange unholy rituals as one of the main sites of The KLF's bizarre mini festival Welcome to the Dark Ages.