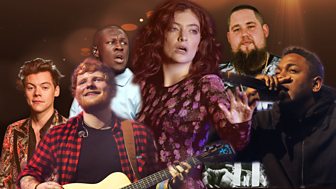 This year has been extraordinarily busy for all sorts of different reasons, and with such a volume of stuff going on, it's hard to keep track of all the songs, moments and news stories that have risen speedily to notoriety and then been replaced by something else.

So, with The Year in Music 2017 here to celebrate the year in music on 8 December, here's a chance to refresh your memory as to what has been going on, at least until something else happens.

PSY's Gangnam Style landed on YouTube in 2012, went viral, and famously became the first video to clock up a billion views on the video-sharing site. It seemed, for the longest time, that no other video could catch it up, not least because fans kept watching it (it's now had 3bn views).

However, this year, it met two challangers. The first song to overtake it - in July - was 2015's See You Again by Wiz Khalifa, featuring Charlie Puth. Then, soon after, the unstoppable force of Despacito by Luis Fonsi featuring Daddy Yankee shot to top of YouTube's list. And, incredibly, it made it there in less than a year - it was released in January 2017. It's now had a staggering 4.5bn views.

2. The charts were protected from Ed Sheeran

Back in March, all 17 tracks from Ed Sheeran's Divide album entered the Top 20 at once, causing serious questions to be asked about how this sort of a thing could be allowed to happen, and to wonder how we could stop the precious variety of the charts from being smothered in such a way again. This despite the fact that the chart is supposed to be a reflection of what people are actually listening to, and for that week at least, it was a total Ed-fest.

The curious thing was the extent to which the chart became a serious hot topic for the duration of Ed's reign. There was outrage and despair, delight and confusion in equal measure. Dubbed "the Sheeran singularity" by music journalist Laura Snapes, Ed's division invasion became an actually unrepeatable event in July, when the Official Charts Company altered the rules so that only three songs can be eligible from an album in any given week.

We're so used to bands splitting up or saying that they're going on hiatus, only to see them reform quite soon after, we've almost become immune to their initial announcement that they're taking time off. So, be honest now: do you remember dance duo Disclosure telling fans in February that they needed "some much needed rest"? They added, "You changed our lives forever and enable us to do what we love best on this planet," which sounds quite final, adding: "We were 15 and 18 when we began this incredible journey. It's been filled with shows bigger and better than our childhood minds could ever have imagined."

But the door has been left ajar for a return. They fulfilled some previously booked obligations for the year, and didn't say they were splitting up for good.

The Proms are a wonderful thing, but it's not every day that a concert becomes a social media phenomenon. The performance by the Chineke! Foundation at Prom 62 was different. The orchestra was formed in 2015 to offer opportunities for young black and minority ethic classical musicians. Their ranks include the cello prodigy Sheku Kanneh-Mason, winner of the BBC Young Musician 2016 and still only 18 years old. His contribution to a well-judged programme of short, punchy pieces included Dvořák's Rondo and David Popper's Hungarian Rhapsody.

Jeanine De Bique, a soprano from Trinidad, also wowed audiences with her rendition of Da tempeste il legno infranto from Handel's Julius Caesar, and the Prom featured new work from composer Hannah Kendall as well as a revival of music from African-American composer George Walker. At the time of writing, the highlights clip above has generated four million views on Facebook, and nearly 100,000 shares.

5. Lil' Yachty learned the instruments of the orchestra

This is a cautionary tale about using similes and paying attention in music class. In May, Lil' Yachty's ribald song Peek A Boo received a certain amount of web attention due to his claim that his girlfriend blew a part of his anatomy "like a cello". The cello, of course, is a string instrument, so it's a bow, not a blow.

Once his mistake had been pointed out, Yachty then compounded the error by rushing to the lyrics website Genius and annotating his own words with this comment, which referenced a key character from Spongebob Squarepants: "I guess for a second, I thought a cello was a woodwind instrument and it is not... Nobody ever pulled up a pic and said, “Hey man. I don’t know if you know what this is, but it ain’t that.” ... I thought Squidward played the cello. He don’t. That’s a flute."

Except Squidward doesn't play a flute, he plays a clarinet.

6. Under the radar, Selena Gomez released one of the best songs of the year

Despacito aside, pop music in 2017 has been largely about warm and minimalist tropical house music - like Ed Sheeran's Shape of You - with the occasional sped-up voice that sounds like a ghost. Selena Gomez's Bad Liar is not like that. It's a hesitant song about infatuation and worrying about making bad decisions. It has a bassline sampled from Psycho Killer by Talking Heads, but the tonality has been changed from minor to major, turning paranoia into yearning and self-doubt in the process.

And Selena sings the song half to herself, half to the person she misses, like they're not really there and by golly it hurts. It's a supreme pop achievement - made all the more beguiling because it sounds so little like anything else, and it happened while Selena was recovering from a kidney transplant - and yet it only got to No. 21 in the UK charts.

7. The charts welcomed the first centenarian

Dame Vera Lynn was already the oldest living person to have a Top 20 album in 2014, when her album National Treasure was released, and she became the oldest living artist to secure a No.1 in 2009, at the tender age of 93. But in 2017, she released 100, in celebration of her 100th birthday. It's an album of some of her best loved songs - We'll Meet Again and White Cliffs of Dover among them - with help from special guests such as Alfie Boe, Alexander Armstrong and Aled Jones.

The album went to No.3 in the charts, making Dame Vera the first ever centenarian to achieve such a feat. Beat that, Sheeran!

[LISTEN] Bill Drummond on how The KLF met Tammy Wynette

Having disappeared from public life on 23 August 1994, conceptual rave-rockers The KLF returned, a precise 23 years later, to launch a series of events in Liverpool, including a reading of a novel entitled 2023: A Trilogy, by the Justified Ancients of Mu Mu and a discussion of their last great work, the burning of £1 million.

There was no new music, however, apart from an ice-cream van playing What Time Is Love? and a self-styled graduation ball featuring a performance by a singer called Badger Kull. It was all rather rum, and entirely in keeping with the firebrained career of a band who became the biggest selling singles act of 1991 almost by accident, and then left the stage in a blaze of scorn and glory.

9. The UK did alright at Eurovision

[WATCH] Lucie Jones performs Never Give Up On You

The political climate of the moment may have led some seasoned Eurovision fans to conclude that the British entry for this year's competition would do badly as a kind of tit-for-tat for Brexit. But, given that our recent entries haven't been troubling the upper reaches of the final scoreboard for some time, Lucie Jones's 111 points and No. 15 position in a field of 26 actually look pretty great.

It's the highest score we've had since 2009, when Jade Ewen's That Sounds Good to Me came in fifth with 173 points. And only Imaani (166) and Jessica Garlick (111) have matched or beaten it in the twenty years since Katrina and the Waves won with Love Shine a Light.

10. Liam sang Don't Look Back in Anger for the first time

The Gallagher brothers both released albums in 2017, and enjoyed having a pop at one another in various interviews. But their biggest emotional hit of the year came from Liam singing a song traditionally associated with Noel. At Glastonbury, in response to the Manchester bombing, and the Grenfell Tower disaster, Liam sang an a capella version of Don't Look Back in Anger.

It felt like a spontaneous moment, a show of humility and warmth from a man better known to be angry at everything and a nod to Ariana Grande and Coldplay performing the song a few weeks earlier at the Manchester One Love concert. And because of the ongoing history of aggression between both Gallagher brothers, it looked like an olive branch, a healing moment from a man who knew a thing or two about letting go of a grudge, for the moment at least.