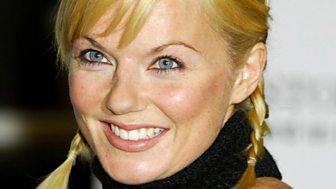 The hayseed was flying recently, as tabloids gleefully reported that a country album recorded by former Spice Girl Geri Halliwell, due for release later this year, had leaked. Exciting as the thought of Ginger mixed with bourbon was, it seems that album, which Geri has reportedly been working on for six years, will have a "folk feel", but is far from full-on country.

We look forward to hearing the work of Acoustic Spice, and Geri isn't the only pop star who will be switching up her musical direction this year. As Music News Live reported on 22 July, Sophie Ellis-Bextor's new album Familia, due in September, will have a South American theme. Sophie also spoke to Jonathan Ross recently about always trying different styles on her records:

And those two stories set us to thinking about the many other great musical direction changes of our time, some more successful than others... 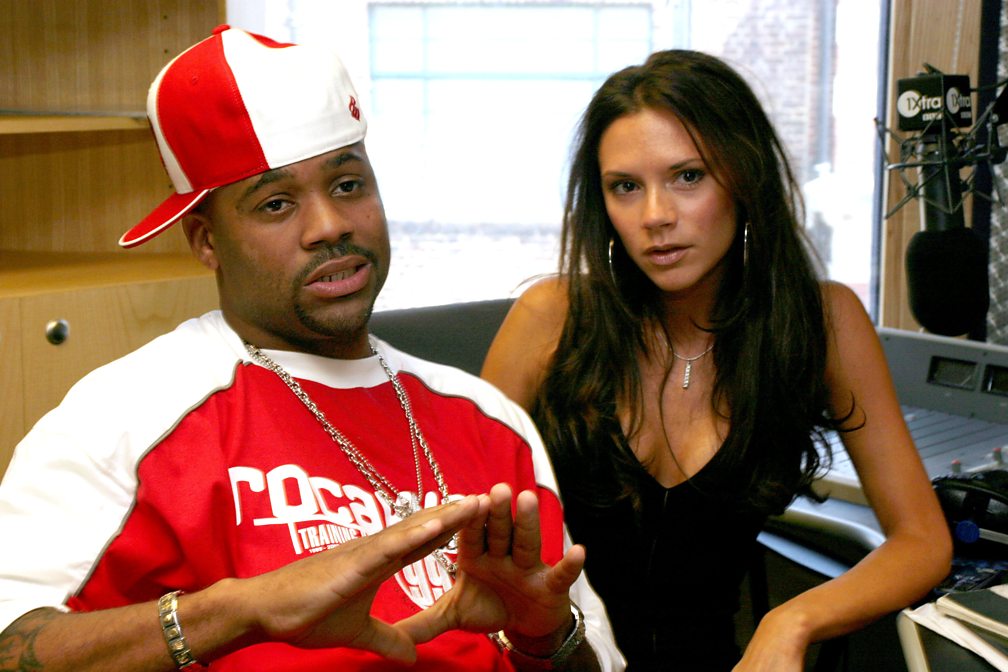 It's hard to remember when you behold the supersmooth businesswoman she is today, but there was once a time when Victoria Beckham was the one most visibly struggling to find her feet outside Spiceworld. After a brief garage dalliance with Dane Bowers and True Steppers - the period curio Out of Your Mind - and a less-than-mindblowing debut solo album, Posh changed labels and recorded her first shelved album, a pop effort entitled Open Your Eyes.

Unhappy with its soft sound, she binned it and went seeking the sort of harder urban edge that doesn't come naturally to a native of rural Hertfordshire. She decided to work with Roc-A-Fella Records co-founder Damon Dash, who was frank about his reasons for collaborating with her - "Because I see how much she gets photographed over here" - and apparently put a commensurate amount of effort into the sound of album Come Together, which was rejected by her label Telstar, and only saw the light of day this year when someone purchased a demo disc on eBay and uploaded the contents to YouTube. Suffice to say, Victoria's talents are definitely better employed in fashion than rap. 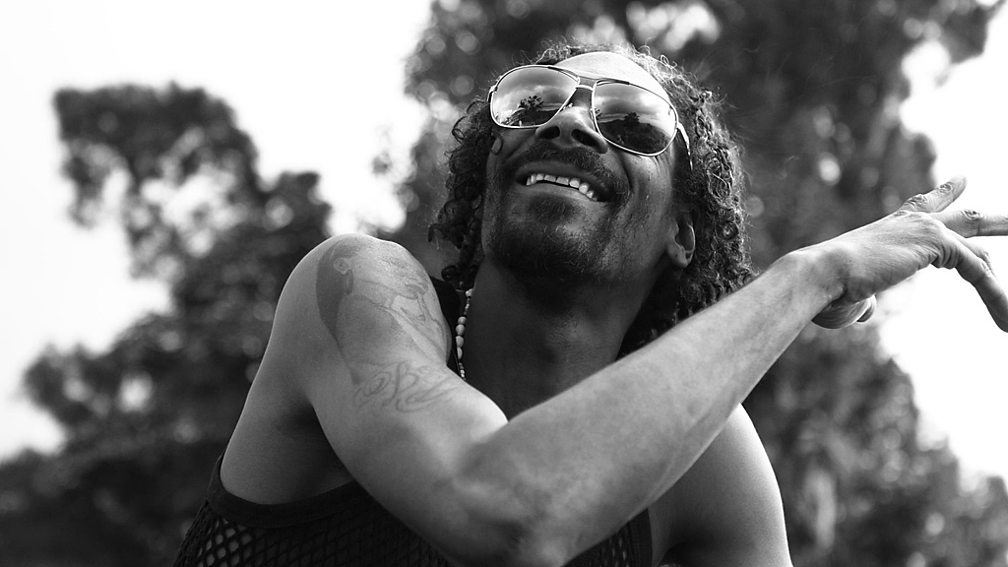 Pop's full of great religious conversions: soul smoothie Al Green becoming the Reverend, sex siren Prince turning Jehovah's Witness, Bob Dylan going gospel. But few were more surprising than gangsta rapper Snoop upgrading his Dogg to a Lion and answering the call of Rastafari with his 12th album Reincarnated. Claiming that the genre had always influenced his rap, Snoop went full-on reggae, asserting on camera that he was the reincarnation of Bob Marley, despite the fact their lives had overlapped by a good decade.

Harsh words were exchanged with original Wailers member Bunny Wailer after he and Snoop fell out over the album's accompanying film, with Bunny accusing Snoop of "outright fraudulent use of Rastafari Community's personalities and symbolism". Given titles such as Rebel Way and Smoke the Weed, you might see his point. 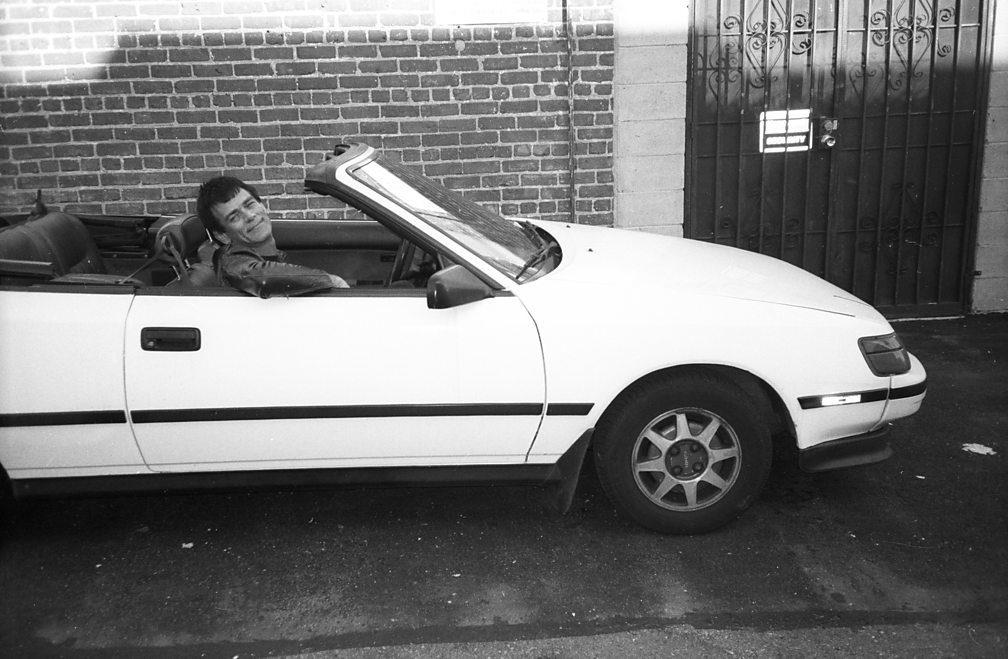 Victoria Beckham was far from the first. In the early days of hip hop, the freshness and energy of the genre inspired quite a few punk musicians to try on the new sound for size: Blondie on Rapture, Sex Pistols manager Malcom McLaren on cult classic Buffalo Gals. Former punks the Beastie Boys fell so hard they swapped genre entirely and went on to play a part in hip hop's future.

Their punk/rap crossover, though, could also be said to be partly to blame for Ramones bassist Dee Dee's hilariously awful rap album as Dee Dee King. He fell for rap while in rehab, releasing Funky Man in 1987. Two years later, he released Standing in the Spotlight just before leaving the Ramones (much to the image-conscious group's disgust, he'd been turning up to Ramones gigs in hip hop gear). Highlights: rapping about Bailey's Irish Cream on 2 Much 2 Drink, and bilingual magic with Debbie Harry on German Kid ("Ich lese den Zeitung jeden tag"). It's probably still better than Brian Wilson's Smart Girls, a 1991 rap song by the Beach Boy.

That rock-rap crossover runs both ways, and having established himself as one of hip hop's heavyweights in the 80s, Ice-T formed his metal band Body Count in 1990. His love of the genre went back to his days sharing a room with his metalhead cousin and his own love of Maiden and Sabbath. Not everyone found it a natural crossover, though, and it fell to T to point out in interviews that rock 'n' roll, the root of metal, was black music. "Don't they know rock's just for whites? Don't they know the rules?" he mocks on There Goes the Neighbourhood.

The group caused global controversy with their violent anti-police brutality song Cop Killer, earning censure from the then-president George Bush, and Body Count's debut album was eventually recalled and re-released without the song. 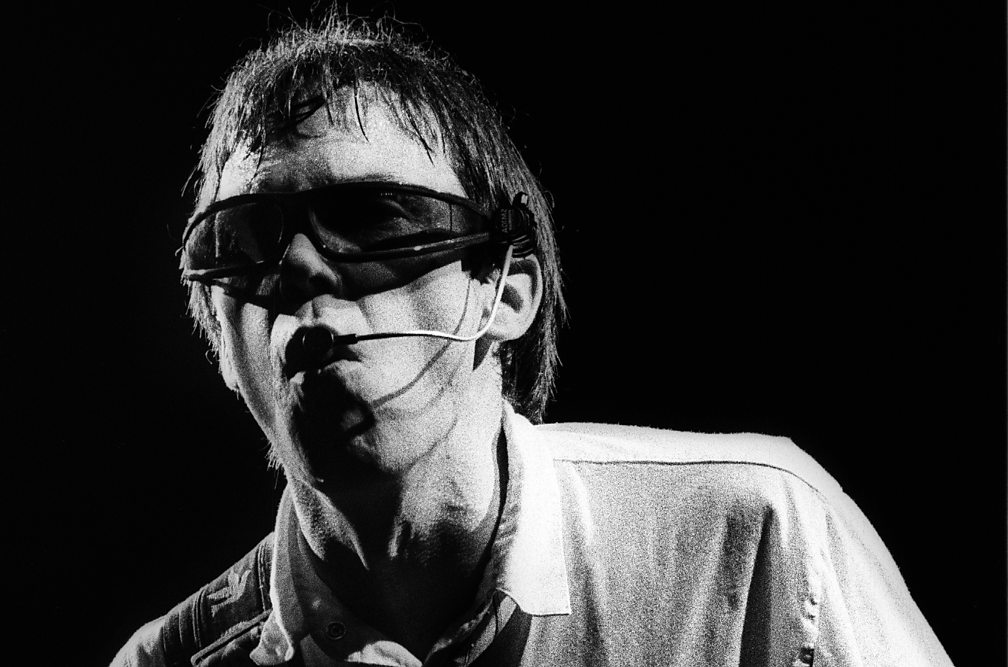 You wouldn’t have bet on hard rockin' hero Neil Young making a success of synthesizers, but having engaged with the sound of the new wave on his previous album Re-act-or, 1982's Trans saw him splicing his growling guitars with the influence of Kraftwerk to fascinating effect on songs such as Computer Cowboy. The album made heavy use of vocoders, masking Young's trademark warble, something he said reflected his struggles at the time to communicate with his young son, who had been born with cerebral palsy, and the vocal exercises they were doing together.

His meaning certainly didn't make it through to his label Geffen, who cited Trans as an example of Young deliberately submitting uncommercial work in a 1983 lawsuit. Critics and some fans too were baffled. "They put me down for f****** around with things that I didn’t understand - for getting involved in something that I shouldn't have been involved in," said Young. "Well, f*** them." Today, Trans is hailed as a lost classic, and has influenced the likes of Sonic Youth and Daft Punk. 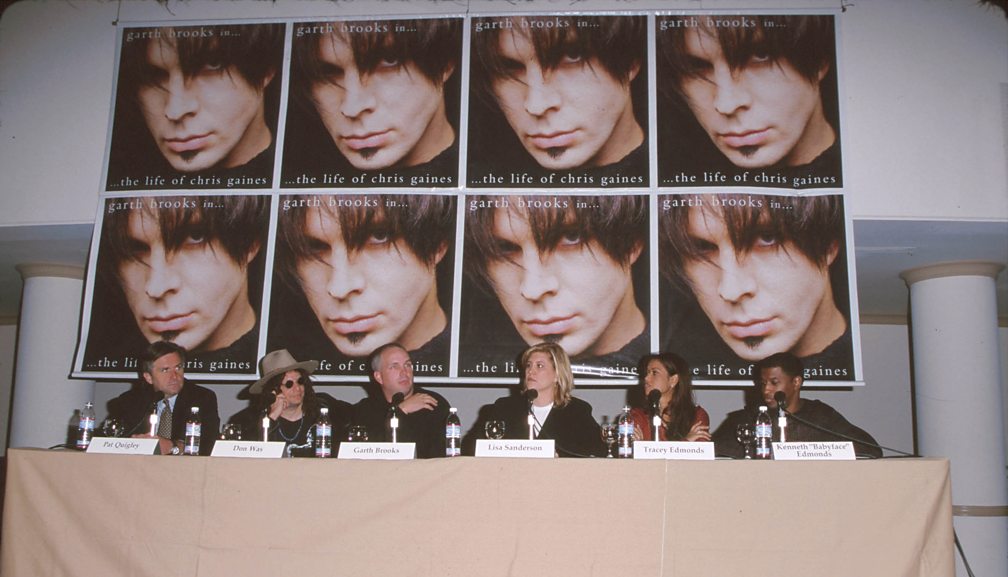 Though hugely successful - with 95 million sales to his name - Garth Brooks was something of a figure of fun among non-country fans in the 90s and struggled to cross over. Like a 30-something, Stetson-toting Taylor Swift, he tried to push at the genre's boundaries, announcing in 1999 that he would record a concept album and film about a fictional Australian rock star, Chris Gaines: a martyrish, mysterious figure with a marked resemblance to Soundgarden's Chris Cornell.

Brooks was so keen to inhabit this new persona that he recorded a VH1 Behind the Music documentary in character and hosted Saturday Night Live, as Brooks, with Gaines as his musical guest. "The thing I'd like to get across is how serious we are about this," he said. "There's The Rutles and there's Spinal Tap, and this is exactly the opposite." His debut album as Gaines kept up the ruse, a Greatest Hits (also titled Garth Brooks in... The Life of Chris Gaines) culled from nonexistent albums, whose sleeves decorated the liner notes - but sadly, the sound didn't quite live up to the intriguing weirdness of the concept.

For some, it's down next to Tin Machine and Never Let Me Down among Bowie's nadirs, but Earthling stands up as testament to the great man's forward drive. Released in 1997, at a point when a lot of British rock and indie culture was looking back to former glories, the dame was looking to the future.

Though he appeared in an Alexander McQueen Union Jack coat on the cover, the Bowie vision of Britpop was rather different, soaking up the new sounds of drum 'n' bass and jungle. Rather than just sample the genre and stick it on top of his own sound, though, he had his drummer Zac Alford copy and improvise the rhythms and then sped them up in the studio, and used sampled and treated guitars like synths (it was the first Bowie album to be produced entirely digitally). Bowie stressed the album's mood of aggression, and revelled in having the song's remixed, to mess with his fan's heads even more than the likes of the stream-of-consciousness Little Wonder and the crunching Law already had.

She's had many guises over the years, but not everyone knows that back while she was still in Icelandic indie crew The Sugarcubes Björk released a jazz side-project, Gling-Gló. She'd been introduced to the world of jazz as a child by her grandparents, and had long used jazz-like scatting and growling in her vocals, but in 1990 she took it all the way, recording an album of standards, mostly sung in Icelandic, with local veterans Tríó Guðmundar Ingólfssonar, who she met on a Icelandic radio programme.

The result is Björk as you'd never heard her before, including on Í dansi með þér, an Icelandic version of Dean Martin's Sway, Leiber and Stoller's Ruby Baby, Oscar Hammerstein's Can't Help Loving That Man and more local numbers such as Kata Rokkar (Kata rocks) and Gling-Gló (Tick Tock), all recorded in just two days. "She is as good as the old singers, but very different,” drummer Gudmunder Steingrimmson said. "What she does and how she sings it is from the heart, and that’s what counts."

Punk, especially of the US variety, tends to be a pretty purist game, but LA four-piece The Bronx have proved supremely receptive to the sounds of their native city. After releasing two albums of hardcore punk records, the band followed up in 2009 with an album of traditional mariachi music as Mariachi El Bronx. "It was something that was a part of us that we didn't really realise,” said singer Matt Caughthran. "Being from Los Angeles and growing up surrounded by Mexican culture, it just kind of happened... it was the funnest and easiest record we've ever made."

The first song released under the new name was a cover of Prince's I Would Die 4 U, but the project proved to have far more than novelty charm, releasing two more albums as MEB, the latest in 2014. The band wear full Mexican regalia for their Mexican performances, and in the ultimate seal of approval, were asked to perform between segments on the El Rey Network wrestling programme Lucha Underground. 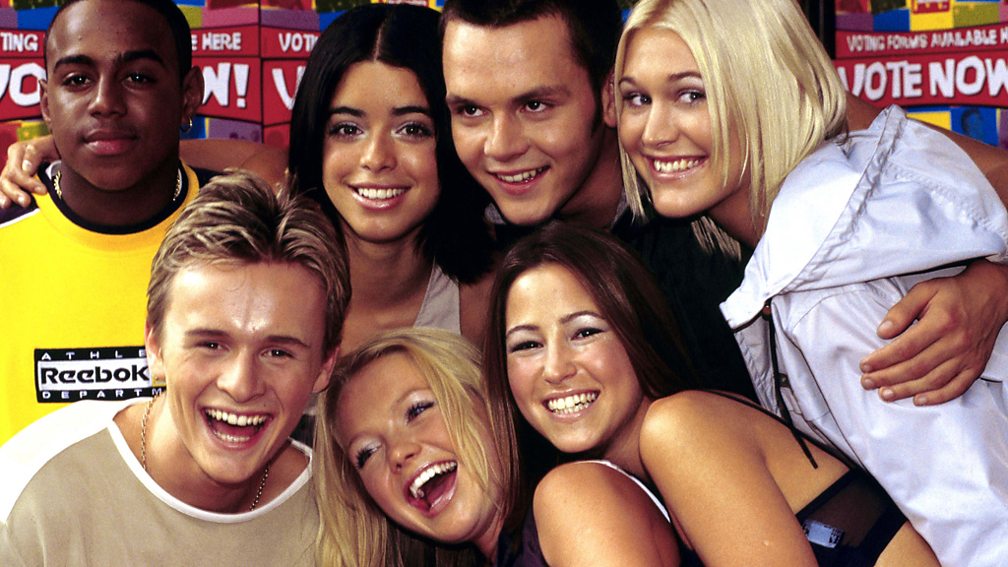 It was a case of don't stop moshing for St Alban's boy Paul Cattermole when he took the 7 out of S Club 7 back in 2002, announcing that was leaving the pop group to return to his rock roots. Those roots took the form of pre-fame band Skua, who Cattermole described as having a "Limp Bizkit vibe", as if that was a good thing. Still, being in a micro-managed internationally successful pop group must have its pressures, and Cattermole duly screamed them out on songs such as Duty Killer. Skua never quite took off, and Cattermole joined the S Club reunion in 2008. The reunion spirit proved catching, with Skua getting back together in 2014, and finally recording their debut album, Kneel: a happy ending of sorts.