Dramatic escape from the Doctor Who Experience 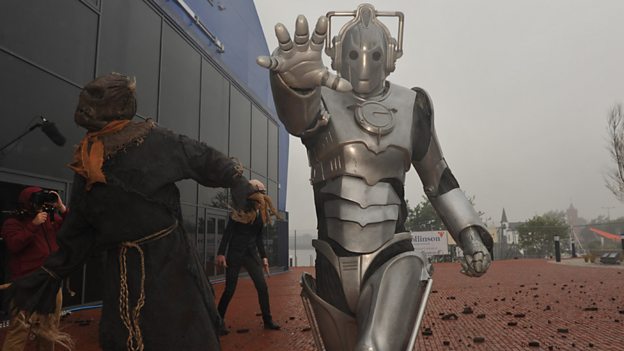 Five monsters escaped from the Doctor Who Experience in a dramatic break out this morning. At 8am there was a loud explosion within the building and a Cyberman; Ood; Silent and Scarecrow were caught on camera fleeing the building. The escape is believed to have been masterminded by one of the Daleks who have recently relocated to the new Doctor Who Experience in Cardiff.

Paula Al Lach, Head of Exhibitions for BBC Worldwide was holding a press conference when the explosion took place. In a statement she said: "If any members of the public spot the monsters in Cardiff please do not to approach them yourselves. They are extremely dangerous. Please report your sighting to us on the Doctor Who Facebook page to help us track their movements so that we can ensure they are returned  to the Doctor Who Experience.”

When asked if this would cause a delay to the Experience opening on the 20th July she said: “Absolutely not, we will have the monsters contained and back in place ready for our official launch next month.”

Sightings of the Monsters should be reported at: www.facebook.com/DoctorWho or tweeted to @DW_Experience using the hash tag #MonsterEscape

Photos of the breakout are available to all media who can assist in tracking the monsters down.