Doctor Who: Worlds in Time in Open Preview 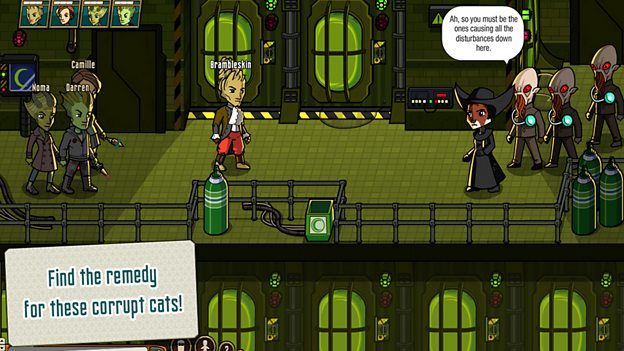 We’ve worked to provide Doctor Who fans an experience that matches the quality and imagination of the TV show, and a forum to introduce casual gamers to this remarkable world with an experience accessible to players of all levels.”Daniel James

Category: BBC Worldwide
BBC Worldwide Digital Entertainment and Games today announced the open preview launch of Doctor Who: Worlds in Time, the new browser-based, free-to-play multiplayer online game. Developed in partnership with Three Rings, an award-winning developer of persistent online worlds, such as Puzzle Pirates and Spiral Knights, the game is the first-ever multiplayer game based on the Doctor Who television series.

Beginning today at DoctorWhoWIT.com, Doctor Who fans and gamers everywhere can enjoy the mystery and community of Doctor Who: Worlds in Time, which draws on the rich mythology, locations and excitement of the beloved television show.

“Our goal with Doctor Who: Worlds in Time is to expand engagement with the immensely popular Doctor Who brand and allow fans to deeply immerse themselves in that universe,” said Robert Nashak, executive vice president, BBC Worldwide Digital Entertainment and Games. “The game’s multiple worlds, its varied, wonderful characters and monsters, and changing story arcs will appeal to both Doctor Who fans and casual gamers alike.”

Doctor Who: Worlds in Time is designed for devotees of the show looking for a quick pick-up-and-play game, and life-long gamers and sci-fi enthusiasts seeking increased social engagement. Players choose among four races and endless possible character combinations to create their avatars. They can join together in missions identified by the mysterious Time Lord to defend civilization by undertaking interventions against infamous villains bent on creating chaos and destruction in the universe. Throughout the game, players will explore deep immersive worlds (e.g., Skaro, Messaline, The Library and New New York) featuring iconic monsters (e.g., Daleks, Cybermen and Weeping Angels), delivering the authentic experience of being part of the Doctor Who realm.

“As a huge Doctor Who fan, the chance to develop this game with BBC Worldwide was a dream opportunity,” said Daniel James, CEO of Three Rings Design, Inc. “We’ve worked to provide Doctor Who fans an experience that matches the quality and imagination of the TV show, and a forum to introduce casual gamers to this remarkable world with an experience accessible to players of all levels.”

While the game is free-to-play, revenue is generated through micro-transactions. Players can enhance their experience and accelerate their progress in the game through the purchase of Chronons, which will help them to complete missions, customize their avatars, build new contraptions and more.

Doctor Who, one of BBC Worldwide’s flagship brands, is the longest-running science fiction series in the world. It’s the story of the Doctor, the mysterious traveller in time and space, who has saved the universe so very many times. The Doctor is a Time Lord, one of a legendary race of powerful beings whose job it is to observe and record, but never interfere. The Christmas Special, “The Doctor, The Widow and The Wardrobe,” will be shown at 8 p.m. on BBC One in the UK on Christmas Day.

Doctor Who: Worlds in Time will launch commercially in the first quarter of 2012.

BBC Worldwide Limited is the main commercial arm and a wholly owned subsidiary of the British Broadcasting Corporation (BBC). The company exists to maximise the value of the BBC’s assets for the benefit of the licence fee payer and invest in public service programming in return for rights. The company has six core businesses: Channels, Content & Production, Sales & Distribution, Consumer Products, Brands, Consumers & New Ventures and Magazines, with digital ventures incorporated into each business area. In 2010/11, BBC Worldwide generated profits of £160 million on sales of £1158 million and returned £182m to the BBC. For more detailed performance information please see our Annual Review website: www.bbcworldwide.com/annualreview

BBC Worldwide Digital Entertainment and Games is a core business within BBC Worldwide, the main commercial arm and wholly-owned subsidiary of British Broadcasting Corporation (BBC). Launched in 2010 and headquartered in Los Angeles and London, the business works with top BBC brands to develop new opportunities across a wide range of gaming platforms. The business is responsible for the company’s first MMO, Doctor Who: Worlds In Time and the multi-year partnership with Top Gear and Forza Motorsport, amongst many others.

Doctor Who: Worlds in Time: DoctorWhoWIT.com

Three Rings is a game company dedicated to making innovative and engaging online games that bring joy to a wide audience. The company was founded in 2001 and launched Puzzle Pirates in 2003. The company is based in San Francisco, with offices in a steampunk submarine. The company also has tentacles in Philadelphia, PA, and Madison, WI. For more information, visit www.threerings.net.