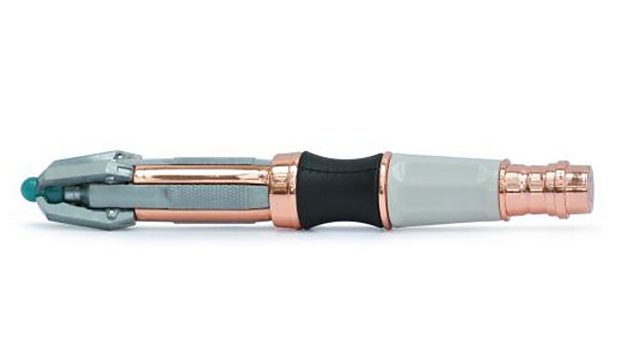 Ever since Patrick Troughton, the Second Doctor, first produced it from his jacket, the sonic screwdriver has been the Doctor’s most trusted tool. Now, for the first time, Doctor Who fans have the opportunity to bring the Time Lord’s extremely cool and iconic gadget into their own homes.

With a green flashing tip and an impressive four operational modes – including a practice mode – and three memory banks, a total of 39 commands can be stored in the Sonic Screwdriver Universal Remote Control, giving aspiring Time Lord’s the option of operating multiple home entertainment devices with different flicks of the wrist.

Control is straightforward – even for humans. The Sonic Screwdriver Universal Remote Control works through a series of 13 short gestures, such as rotating, flicking or tapping, and a guided set-up procedure uses spoken prompts to match gestures to commands learned from existing remote controls.

And, for those fans who wish to transport a little more of The Doctor into their own homes, the FX operational mode features a range of authentic vintage Doctor Who sound effects.

All unauthorised alien usage of his device can be avoided as the Sonic Screwdriver Universal Remote Control comes with an inbuilt security setting - a three digit PIN can be set by the primary user - offering ultimate human control of the ultimate alien device.

As time travel is not readily available to most humans, Doctor Who fans will have to wait until August 31st 2012 to own a Sonic Screwdriver Universal Remote Control, when it is available from UK retailers.


BBC Worldwide Limited is the main commercial arm and a wholly owned subsidiary of the British Broadcasting Corporation (BBC). The company exists to maximise the value of the BBC’s assets for the benefit of the licence fee payer and invest in public service programming in return for rights. The company has six core businesses: Channels, Content & Production, Sales & Distribution, Consumer Products, Brands, Consumers & New Ventures and Magazines, with digital ventures incorporated into each business area. In 2010/11, BBC Worldwide generated profits of £160 million on sales of £1158 million and returned £182m to the BBC. For more detailed performance information please see our Annual Review website: www.bbcworldwide.com/annualreview