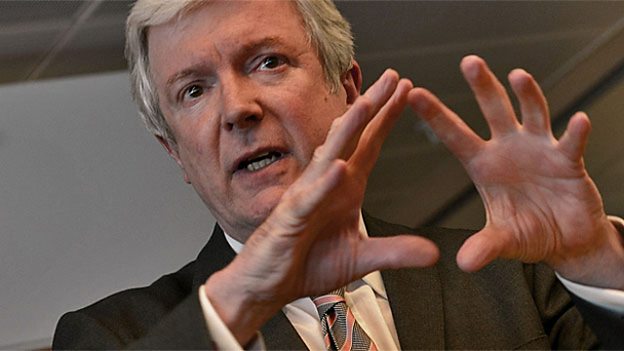 Category: Corporate; Wales
Speech given by Tony Hall, BBC Director-General, at the National Assembly for Wales Reception on 1 April 2014.

Good evening – I’m delighted to be here. And I’d like to thank the Presiding Officer for the very warm welcome that we’ve received.

Thank you all so much.

I have been back at the BBC a year today – and it has been exhilarating (well, mostly exhilarating). To be given the right to be funded by a licence fee is a tremendous privilege. And the truth is that the people of Wales – as in every other part of the UK - make a bold and generous commitment in paying for the BBC.

They own it, they love it, and they expect only the best from it. Every day we have to show we are worthy of that commitment.

I have also returned to the BBC to find a Wales that’s transformed.

I was BBC’s Director of News during the uncertain days of 1997 when the very idea of devolution in Wales was so hotly contested and divisive. Coming back now, I find a nation that exudes a self-confidence, a clearer sense of itself and its own values, and an ambition that feels very different.

It is remarkable that here in Cardiff – just a few hundred yards from where I’m standing - we now have a world-class powerhouse of drama production. A team that produces and oversees some of the BBC’s most loved shows – from Doctor Who to Sherlock, from Atlantis to Casualty.

You know, I remember some voices warning that that the BBC was taking too much of a risk making Wales its home for drama. That the talent wasn’t here. That perhaps the independent sector here was more suited to factual programme-making. That it wouldn’t be sustainable.

Well, they were wrong.

There were also some here in Wales who quietly worried that once Wales hit some notional internal BBC quota for network production, there’d be a glass ceiling – a cap on a nation’s creativity.

Well I tell you it hasn’t happened. Last year, Wales produced almost 7 per cent of BBC UK television programming – far higher than its share of population.

But the transformation I’ve seen in BBC Wales is not just a story of network growth. It is also about a renewed focus on serving Wales with vigour and imagination.

Each and every week in Wales, more than a million viewers tune in to BBC Wales’ television services for Wales – the highest figures in a decade.

That is a remarkable achievement given the significant funding challenges that have faced BBC services here in Wales, and I want to say something more about that in a moment.

In Radio Wales, we have a station that I believe has rediscovered its journalistic mission over recent years. And that commitment to quality and public service has been rewarded with its highest audiences in a decade.

With Radio Cymru, BBC Wales have been candid enough to share publicly the challenges they have faced – socially and linguistically – and they have worked closely with Welsh language audiences to reshape and redefine the service. I think that took honesty and bravery.

But it is also a BBC Wales that is mapping a route through the digital thicket.

When I was Director of News, we launched BBC Online onto an unsuspecting world. At the time, it provoked howls of angst from those who worried that it would deflect money from the much more serious business of programme-making.

I’m glad we ignored them. Each week, BBC Wales' online news and sport services attract almost 4 million browsers each week across a range of devices.

But there is something else too in this story of transformation – a perceptible change of mindset within BBC Wales.

What I see now is a deep-rooted commitment to partnership - to reaching out to organisations right across Wales. I think there’s an innate understanding that we can often achieve more working with others than standing apart.

Nowhere is that more clearly defined than in the BBC’s new partnership with S4C. After all the difficulties we faced at the time of the last licence fee settlement, it is striking how the two broadcasters have forged a remarkable new partnership based on trust and mutual respect.

Just two weeks ago, S4C also announced their plans to relocate with us at the new broadcast centre we are planning for Cardiff. And in a few months’ time, we will welcome S4C onto BBC iPlayer – the only independent channel to be a full part of the BBC’s on-demand service.

But S4C is not our only partner.

The BBC’s broadcast partnership with the Welsh Rugby Union is long-standing – and ensures that pretty much every Welsh international can be enjoyed by everybody here in Wales.

Just two weeks ago the BBC and Arts Council Wales launched a new music scheme – Horizons – to help rocket-boost the careers of some of Wales’ most exciting new artists and bands.

And, again, just last week the BBC announced it was to become the broadcaster partner for the amazing Hay Festival – a celebration of literature and ideas that has established a world-class reputation.

This new spirit of partnership is also shaping a major season of BBC programming to mark the anniversary of Dylan Thomas’s birth.

It is one of the most ambitious cultural projects ever undertaken by the BBC in Wales. A moment to celebrate an extraordinary body of work by a mercurial man who left a global legacy.

The season promises to live long in the memory. It includes an exciting reimagining of Under Milk Wood in partnership with National Theatre Wales, and a vivid account of Dylan Thomas’s last days in the US – A Poet In New York - produced by Modern TV here in Cardiff and written by the peerless Andrew Davies.

In May, the BBC will be decamping to Laugharne Castle for three days of special events, discussions, programming and recordings – a poetic Glastonbury if you will - that will bring BBC Wales and the BBC’s UK networks together to celebrate the work of Dylan Thomas.

The BBC has assembled an extraordinary array of talent for this celebration – and I’m delighted to say that one of Dylan Thomas’s most passionate champions, President Jimmy Carter, will be joining a unique live transatlantic broadcast on 2 May between Radio Wales and WYNC – New York’s public radio station.

So let’s take a look at some of the season’s highlights.

In all these celebrations, we shouldn’t forget that Dylan Thomas’s success and renown bears powerful testament to the BBC’s unique ability to nurture and develop the most outstanding talent.

It was the BBC, after all, that gave Dylan Thomas a platform – and an income - in the mid-1940s and commissioned many of his finest works.

Just as importantly, it was the BBC here in Wales that chided and eventually convinced the BBC’s London commissioners that here was a talent deserving of UK and international attention. It seems they needed some convincing too: they turned down Quite Early One Morning twice before finally seeing sense.

That commitment to both nurturing and championing talent here in Wales is something that I believe still drives the BBC in Wales. And there are examples everywhere you look - in front of and behind the microphone.

Now, because I believe there is such a robust case for the BBC in Wales, there is also a danger of making an argument that appears complacent, rose-tinted or even arrogant.

I say this because I am acutely conscious that the BBC in Wales faces a disproportionate scale of responsibility given the structural and economic challenges faced by the commercial media sector here.

A few weeks ago I argued that the BBC is just one part of one of the strongest media sectors in the world. I said Britain had the most vibrant and independent free press in the world.

Standing here in Cardiff - thinking about the distinctive needs of Wales as a nation - I can understand that those words might sit rather awkwardly.

The bald truth is that the UK media market – when looked at holistically – remains highly centralised in London and the south east.

Indeed, were it not for the efforts of the BBC over recent years – with developments like Salford or Roath Lock – the picture might be even more serious.

And I think this must give the BBC pause for thought as we prepare our plans for the new Charter.

I have spent a lot of the past year visiting BBC centres around the UK. And I am very struck that national and regional loyalties are intensifying. And whatever happens in Scotland, I believe that momentum will continue to build.

In England, the development and growth of the major regional cities – coupled with an increasing sense of England as its own distinctive national space - are both developments that the BBC needs to grapple with.

But there are questions for us here in Wales too. Let me give one example. Despite BBC Wales’ very real success, we must also acknowledge that English language programming from and for Wales has been in decline for almost a decade. The reduction in ITV Wales’ contribution has played a big part in this – but the BBC’s output has also been eroded.

What does that mean for audiences here? It means, inevitably, that there are some aspects of national life in Wales that are not sufficiently captured by the BBC’s own television services in Wales, and I would include comedy, entertainment and culture in those categories.

Does this matter? Of course it does: the vitality of any nation must surely rest on more than its journalism. One cannot fully realise a nation’s creative potential or harness its diverse talents through the important, but narrow, prism of news.

Now this narrowing of output was foreseeable, of course. Faced with budget cuts, BBC Wales rightly took the decision locally to prioritise and protect specific areas of national output – including news, current affairs and political coverage. And so, inevitably, other areas have felt the squeeze.

Let me say there are no easy solutions here. Our recent proposal to close BBC Three as a broadcast channel tell you something about the hard financial choices that the BBC currently faces.

But I do believe the BBC will need to think hard about how it strengthens its support for national and regional self-expression as it prepares its case for a new charter. And I would like to invite you all tonight to be a part of the debate.

WALES WITHOUT THE BBC

Because, let’s never forget, no other public service in Wales is used quite the way the BBC is.

Just imagine for a moment Wales without the BBC.

Where would a nation find its voice in both its languages, where would it be able to explore its identity, its geography, its people? How would a nation come together to share its common heritage? Or debate its shared challenges? Or celebrate its national successes?

Just consider that every day the BBC is actively chosen by the Welsh public close to seven million times. And every day, the average use of the BBC in Wales is over six and a half hours per household – the highest level anywhere in the UK.

Thank you for joining us here tonight.