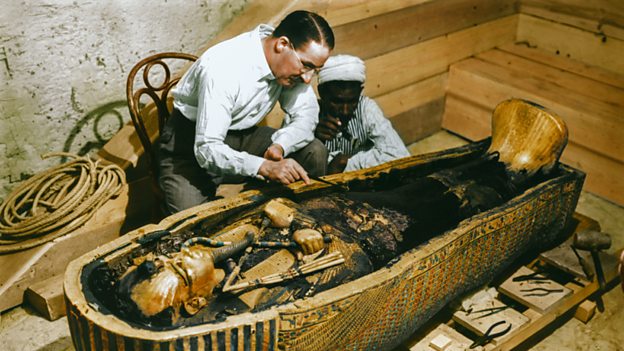 A century after the world’s most exciting archaeological find - the tomb of Tutankhamun - we can witness the dramatic scenes of its discovery and marvel at its extraordinary treasures exactly as they were then, in colour.

Oxford University Egyptologist Elizabeth Frood is our guide to the discovery of the tomb on 4 November 1922 by British Egyptologist Howard Carter and Lord Carnarvon. It provided much-needed good news, following the Great War and the Spanish Flu pandemic of 1919 and we’ve been transfixed ever since.

Uncovering detail not seen for a century, colourisation provides a fantastic insight into the artefacts themselves and the context that they were found in. From bringing to life the young Carter from an old family photo, documenting Egypt’s transformation during the Great War, to the great operation excavating the tomb and the grand revealing of Tutankhamun itself - colourisation will bring a new element of realism and incredible detail to this great moment in history, as if it were in front of us.

Pictured: A colourised version of a photograph of Tutankhamun’s inner, solid gold coffin, lying within the colourful middle coffin. The gold coffin was covered in a black perfumed resin, and here Howard Carter and a colleague are seen cleaning it, using a small hammer and a solvent. Image credit: The Griffith Institute