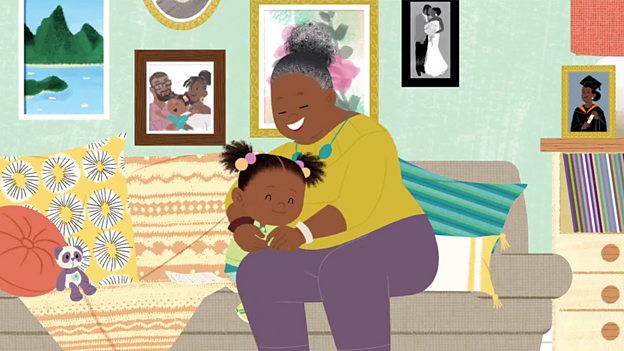 JoJo & Gran Gran is an animated series about an almost five year-old girl and her fun and wise grandmother.

They live close by to one another in a bustling London neighbourhood and Gran Gran always has something planned to do when JoJo comes to visit.

Throughout the series, the stories are inspired by the passing of time, covering topics such as life cycles, the passing of the seasons, growth or the sequencing involved in activities like baking a cake or catching a bus.

JoJo adores her grandma and the time they spend together. Gran Gran is very proud of her Saint Lucian heritage and is always happy when she has an opportunity to teach JoJo about the island’s culture.

In Monday’s episode, JoJo has drawn a picture to show to her great grandma over video call but just as she’s about to show her a picture, the internet goes down! Gran Gran suggests they post JoJo’s picture to Great Gran Gran in Saint Lucia. JoJo learns why a letter takes such a long time to travel halfway across the world.

In Tuesday’s episode, JoJo and Gran Gran miss their bus home. They wait for the next one but JoJo discovers getting the bus isn’t quite as simple as she thinks it is. One wrong bus later and the pair are back to where they started! It’s time to look at the schedule and see when their bus is due to arrive.

On Wednesday, JoJo is determined to slide down the big slide at the park. Even though it’s sunny when they leave the house a rainy weather forecast threatens her plans. Luckily for her, Gran Gran has come prepared!

On Thursday, they are having a spring clear out, but when Gran Gran wants to clear out her old jumper JoJo is determined to keep it - she loves that snuggly jumper! Gran Gran shows her that a clear out doesn’t necessarily mean a throw out, and with some creative thinking they can give their old items new purposes.

In Friday’s episode, JoJo searches for a butterfly to complete her nature tick book. JoJo learns that all butterflies start life as furry little caterpillars.

JoJo & Gran Gran is based on characters created by Laura Henry-Allain. Within each animated episode, there is a live action moment which features children talking about the themes covered.