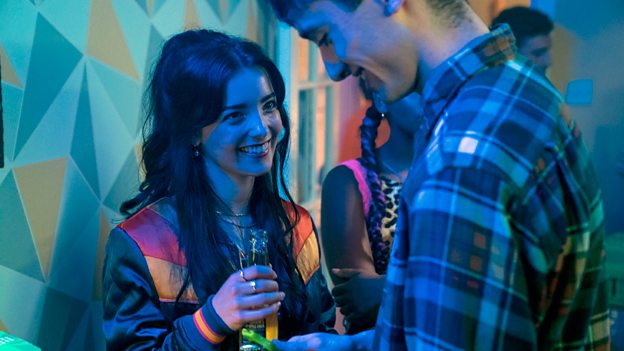 Confirmed for BBC Three on 1 March from 6am

Based on the award-winning stage play, My Left Nut is a coming-of-age comedy drama about friendship, family, grief and testicles, written by Irish newcomers Michael Patrick and Oisín Kearney in their first project for the BBC.

Fifteen year-old Mick Campbell (Nathan Quinn-O’Rawe) is trying to navigate the trials of teenage life with the help of his best mates Conor (Levi O’Sullivan) and Tommy (Oliver Anthony). Big mouth Tommy is always bragging about his numerous sexual triumphs, but his mates know his outlandish claims are not always to be believed. But when Tommy tells them both a tale of his latest sexual encounter and dishes out a nugget of unusual advice for self-pleasure, Mick starts to question himself. What if everyone is doing it and Mick is the only one not doing it?

Desperate to fit in, Mick decides to give Tommy’s advice a go, but he’s not prepared for what he discovers when he does - there’s a swelling on his left testicle.

On top of this, things seem to be progressing with Racheal (Jessica Reynolds), the girl from school who he’s secretly fancied for ages. But Mick doesn’t even know how to talk to girls. How is he supposed to go on a date with one? And with the bulge in his trousers growing bigger and bigger, it looks like Mick might have to try and deal with his swelling himself, before it gets in the way of his chances.

Mick’s plan to hide his swelling backfires when he discovers the whole school is talking about the bulge in his trousers. But it turns out there’s an upside - his classmates have mistaken the swelling from his ball for an incredibly large penis. Tommy and Conor are thrilled at their best friend’s new ‘legend’ status, but Mick is horrified. Rumours are flying around school about what happened between Mick and Rachael on the date. And worse still, Rachael thinks it’s him that started it.

It looks like the relationship between Mick and Rachael could be over before it’s even begun. Mick desperately wants to explain, but how can he when he can’t tell her the truth about what’s going on.

With everything going on at school, tensions flare between Mick and his mum (Sinead Keenan), and even his sister Lucy has something to say. He can’t clear the air until he faces his problem. But what if it’s something serious? What if the doctors tell him its cancer?

With the results of his ultrasound looming. Mick is convinced the diagnosis is going to be bad. Really bad. Any attempts to reassure him only make him more convinced that it must be cancer.

Mick goes full throttle at Tommy’s house party as he tries to forget about his testicle. He’s determined to make the night count. This is going to be the party of a lifetime. Mick’s certain his time is up, and giant ball or no giant ball he knows he doesn’t want to die a virgin.

Despite his best efforts, Mick struggles to forget about the swelling in his trousers. As events at the party take an unexpected turn for the worse, Mick’s actions send shockwaves through the party.

Executive producers are Kay Mellor for Rollem and Tommy Bulfin and Ayela Butt for the BBC. It was directed by Paul Gay and produced by Sian Palfrey.