Universal Credit: Inside The Welfare State 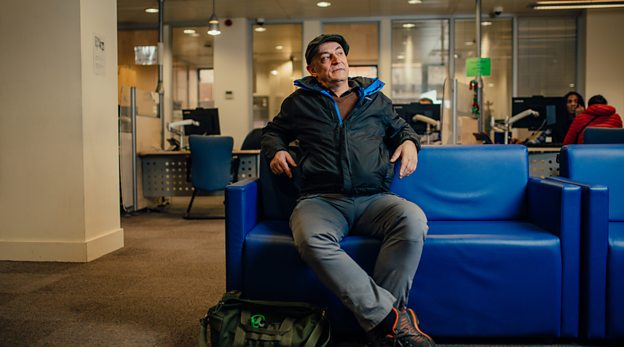 Universal Credit is the biggest and most controversial change to the benefits system in a generation. With unprecedented access to the Department For Work And Pensions, this three-part series for BBC Two follows the people designing the system, the staff in Jobcentres, and the claimants living on the new benefit.

The first episode is filmed in London at Peckham Jobcentre, where over 1,000 people walk through the doors every week.

After working for 27 years in the NHS, Rachel left her job to care for her elderly parents. She has been moved on to Universal Credit but is struggling to pay her rent and electricity bills - partly due to paying back an advance she took out to help make ends meet while waiting for her first Universal Credit payment. With the cost of living being so high in London, Rachel is finding it hard to support herself and her children on the new benefit. She wants to get back to work - but struggles with depression and anxiety.

Karen, a civil servant for 32 years, is one of the longest-serving members of staff in Peckham Jobcentre. Every day she deals with some of the hundreds of people who walk through the door in difficult circumstances. After clocking off from her eight-hour shift at the Jobcentre, Karen heads to her second job, stacking shelves at a local bargain store - a second job that is necessary for her to live on low wages in the capital. Karen works tirelessly to support claimants with Universal Credit, but is frustrated because she believes many of the Jobcentre staff face the same difficulties as the claimants.

Phil (pictured) has been living off benefits for the last ten years and is not enthusiastic about finding work. During that time he has been sanctioned three times by the Jobcentre for not abiding by his 'commitments' to find work, and is now being monitored daily by his work coach, Malcolm. Having spent so much time out, Phil is nervous about the change of coming off the old benefit Job Seekers Allowance and how it might affect his life. Malcolm faces the challenging task of getting him a job.

Throughout the episode the programme hears from senior civil servants and MPs about the roll out, amid a changing political landscape. Our cameras follow Amber Rudd, the former Secretary of State, as she attempts to make changes to Universal Credit - including reducing the maximum length of a sanction from three years to six months. But are these changes making a difference to claimants on the ground?

The documentary also follows senior civil servant Neil Couling, Director General of Universal Credit. He is responsible for keeping the roll out on track and overseeing the new system which will combine six benefits payments worth £60bn a year - into one. He talks frankly about the massive challenges of implementing such an extensive overhaul of the benefits system.